Naked on the set!

As I prepare to audition for the new X-rated film project by "Hedwig" creator John Cameron Mitchell, I'm left to wonder: Will he think I have the whole package? Part 1 in a series. 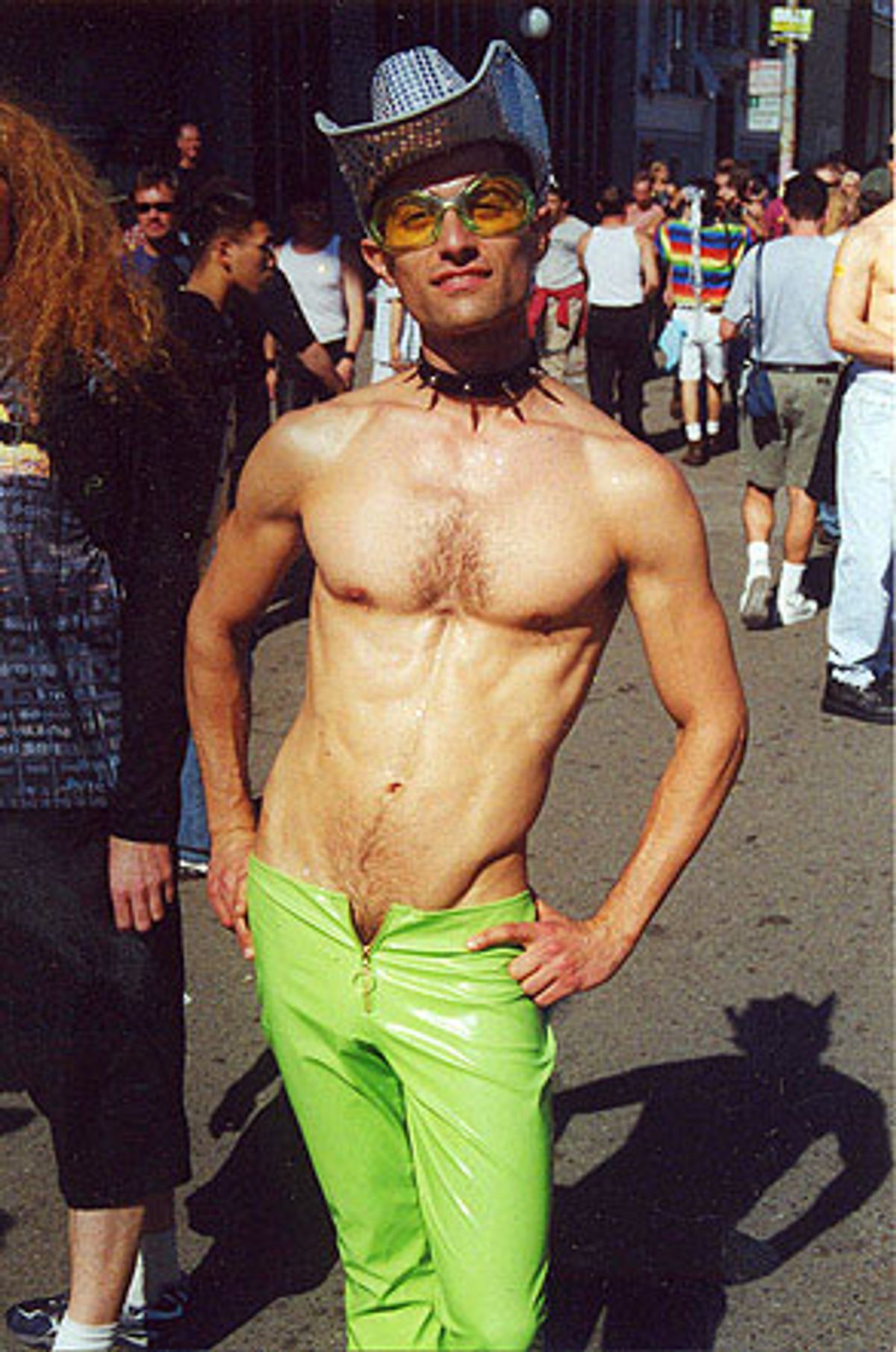 Episode 1: The Steps to Pornassus

The first thing to know about me and my audition for John Cameron Mitchell's sex film project is that I am not an actor. I'm not exactly a writer, either, although I've written somewhere in the neighborhood of a million words over the last nine years. I even had a literary agent, one of the best in the business. She didn't quite manage to sell my first book, or to like any of my others, and last year I found myself delisted by her agency after submitting an experimental narrative about an affair I had with a married couple, my age, who resembled my parents.

Since then I've been doing some photography, along with some floral installations in the rent-controlled Victorian flat I share with three others in San Francisco, and holding down a job that qualifies only under the broadest definition of writing. In other words, I'm one of those people in what Hedwig would describe as their late early thirties who have not quite decided what they are going to be when they grow up. I am sufficiently panicked about that fact, and enough of a supplicant to the American cinematic cult, to have submitted an audition tape for Mitchell's online cattle call to star in a legitimate movie with hardcore sex.

I'm a California boy, born and raised and returned to San Francisco, but my parents are native Brooklynites, so I have a lot of extended family in the area. I also lived in New York for three years in my early 20s, studying violin at Juilliard, where I first met Albert Fuller, the harpsichordist and early music evangelist. Albert helped me understand how the path to the sex film project audition could be plotted along the seemingly desultory series of events that have unfolded over the past six years: first having to quit playing the violin because of a repetitive strain injury; then returning to San Francisco, where I took a few evening classes at the American Conservatory Theater and performed a few times at a midnight drag cabaret; meeting the parent-doubles and writing my book about our affair (the subject of my 10-minute audition video); and being sufficiently bored and idle one afternoon a few years back to make an erotic video of myself shaving my own head (the audition tape's grand finale).

"Honey," Albert said. "It's the gradus ad Parnassum--" He trailed off knowingly.

Smoke curled up into the stark beams of white light bearing down on his white bar, across from which I had heard Albert refer to the steps to Parnassus many times. Unfortunately, I was usually too altered by the time he brought them up, including this time, to remember exactly what they signified. So I asked.

Albert put a Nat Sherman cigarette into his mouth, then immediately withdrew it. "But they all look at it like the three steps going up to the Parthenon, which of course is translated into Holy Mother Church as where you put the altar -- on three steps, because Greece is underneath every fucking Roman Catholic, Anglican altar on earth. It's those three steps. And people think that those are the steps in life that you have to take."

"But honey, they're wrong! Every step is different. Some steps are like this--" Albert held out his forefinger and thumb an inch apart. "--and some steps are higher than this room. And some steps are easy. And some steps require a great deal of effort. And of course the more effort you put into it and the more you make it to that next step, the hotter you feel about why it's nice to be conscious here."

It's been 10 years since I first walked out of the top-heavy Juilliard tomb that weighs down the northeast corner of Lincoln Center and entered Albert's painfully glamorous studio down the street from the Café des Artists. In the main room of the studio, where Albert has long hosted a monthly subscription concert series, he coached me and my trio for a couple of hours once a week before inviting the three of us to the bar for cocktails, smokes and conversation evenly divided between the subjects of art and sex. The studio -- big enough to seat about 50 people on the ground floor, and another dozen or so on the balconies and the staircase -- is a movie star in its own right, having appeared in "All That Jazz," for which Columbia Pictures paid Albert an undisclosed sum and required him to turn his bidet into a flower pot, "Because otherwise nobody will know what that fucking thing is."

Now this studio is the heart of my New York, the place I return to for the kind of wisdom and companionship only a longtime mentor can provide. Albert knows all the steps I've taken toward my own hazily imagined personal Parnassus; he has helped me scale some of the taller ones.

The size of the one now before me, and whether it's leading me to Parnassus or some other place, are questions that were brought into sharp focus a few nights later as I was leaving Albert's studio close to midnight and found that I had voice mail from John Cameron Mitchell. I called him back immediately and, overriding an internal note of caution, asked him out for a drink. He demurred -- he'd been on the phone calling out-of-towners all day and into the night, answering questions and assuaging fears, and was too tired to go out. But would I like to come over to his place?

In the 0.4 seconds it took me to answer this invitation by the director at approximately midnight, my brain processed a staggering number of moral and strategic calculations. Foremost among these concerned the absurd timing with which I had managed, in January, to find a boyfriend and fall in love with him mere days after starting work on the audition tape.

In a third-date conversation about monogamy, this 25-year-old beauty and philosophy Ph.D. candidate said something wildly generous and to my ears romantic, to the effect that while he was naturally monogamous, he wouldn't want for either of us to only have sex with each other for the rest of our lives. "That would be so limiting."

It wasn't exactly carte blanche -- carte grise maybe -- but coupled with the fact that I had only known this person a week or so, and that I wanted so feverishly to be in John Cameron Mitchell's new movie, it seemed ample justification to continue working on the tape. The boyfriend even helped me make it, earning credits as "assistant director #3" and "fluffer to Mr. Festa," and played an uncredited role in which by several accounts he steals the entire movie.

Then came the call from Susan Shopmaker Casting, inviting me to New York. A few days of heady shock followed, during which I called everyone I knew and played Susan's voice mail into their voice mail (leading some to call me, confused, to complain that some woman in New York was trying to reach me at their place).

But once this wave of giddiness washed away, I found myself exposed to a more familiar emotional element, Guilt, whose presence was made all the more vivid by statements from the boyfriend, such as, "The thought of you having sex with someone else makes me physically sick."

Guilt has accompanied me to New York, and has been dining out not only on the story of how I plan to betray my boyfriend, but how I will mortify my parents. How will they react when they find out I've been engaged in vaguely literalized Oedipal investigation these past several years of my psychotherapeutic, private and literary life?

How will the married couple, friends of mine, react when they find out that our affair has been the subject of my book and the audition tape I sent to JCM -- the husband's idol? Do I flatter myself to think they might be flattered? They sure weren't when I wrote about the affair, in fictionalized form, on the blog I kept in my late late-20s. Am I operating under the sick assumption that everyone will forgive me my trespasses because a few motes of residual pixie dust might float their way after I come back from spending a glamorous week with the crew and aspiring cast of this X-rated movie? Is there one thing in this life I hold pure and true enough to save it from the muck through which my star-fucking, fame-whore instincts have invariably led me? I will write down these questions and bring them to a shrink. He will stroke his beard, he will light his pipe, he will take a puff on it, he will say --

"Tell me about your muddah."

Talk therapy, never famous for its efficiency, wouldn't help me decide how to answer the director's invitation to rendezvous with him at his home at midnight. The dilemma was complicated by my long-standing crush on John Cameron Mitchell. Ten years ago, I felt the first jolt of starstruck longing when I saw his picture on the cover of Larry Kramer's play "The Destiny of Me." Hand pressed to chest, sensual mouth open in midsentence, his gaze aloft in a pang of youthful pathos, the actor seemed so open, so vulnerable, and so beautiful that even without my above-mentioned problem with star-fucking, which years of therapy and 50 mg. daily of the libidocide Zoloft have brought somewhat under control, I would have been helpless to resist him.

So how would I fare face to face with him? If those lips wanted to kiss mine, could I refuse them? Should I? My boyfriend, who had given his ambivalent consent to this whole endeavor, understood that the audition might involve sexual activity. Did this count? Would this be a curricular or an extracurricular kiss, and which was worse? Would I be kissing an open, vulnerable, beautiful face, or would I be kissing a director? Was the latter a step to Parnassus or a step off a moral precipice? If I took it, would I tell my boyfriend? Would I tell you?