Massachusetts Sen. John Kerry blistered the Bush administration in a speech Thursday -- but like many Democrats, he shied away from Iraq. 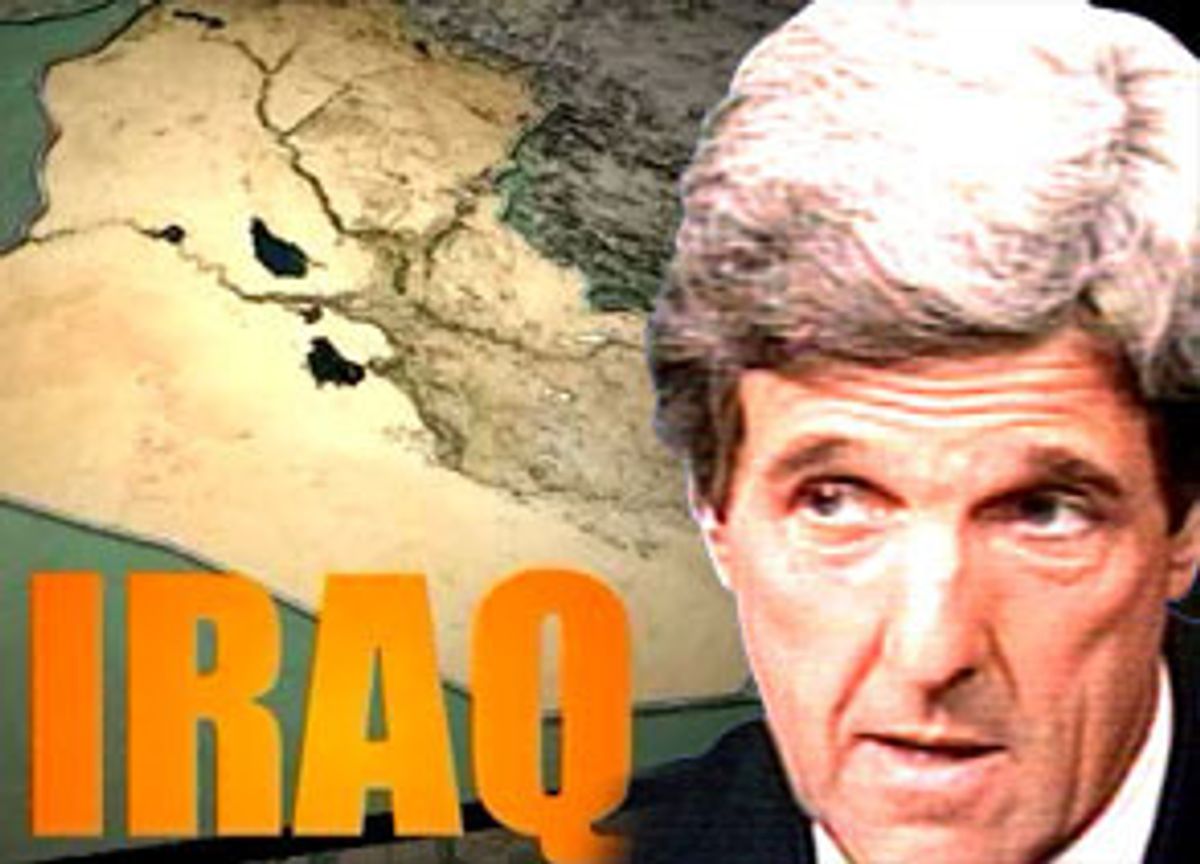 With Democratic presidential candidates under fire for their reluctance to speak out about Iraq, Massachusetts Sen. John Kerry delivered a major policy address in San Francisco Thursday -- and omitted any substantive mention of the looming war.

In a 40-minute speech to a packed hall sponsored by the Commonwealth Club of California, Kerry offered a stinging indictment of Bush domestic policies on the environment, homeland security, eroding civil liberties and the declining economy. But he saved his comments on the war for a question-and-answer session afterward, and even in those tempered remarks, his position on Iraq was less than clear-cut.

The ongoing failure of the Bush administration to win allies in the U.N. Security Council "displays some of the weakest diplomacy we've ever seen in the history of the continental U.S.," Kerry said after the speech.

Although he voted last fall to authorize the president to use military force against Iraq and said Thursday that he did not regret his vote, Kerry did not say whether he still believes force should be used -- or if so, when. "The United States should never go to war because it wants to go to war," he said, echoing statements made in January. "We should go to war because we have to go to war. And that is not clear at this time."

Kerry has been regarded by some as the best hope for a liberal presidential candidate who could both raise the funds and rally the votes necessary to win. Unlike Bush, he served in Vietnam, and he returned from that war disillusioned. "How do you ask a man to be the last man to die for a mistake?" he asked then. Now 59, the four-term senator apparently has joined other Democrats who seem intent on finding a war position that won't offend anyone.

While the nation remains focused on the Middle East, there are myriad issues that demand immediate attention here, he said during the speech. "It is said that to govern is to choose -- and those choices have consequences," he said. "I believe that over the past two years, the federal government has been making the wrong choices."

Regardless of war, homeland security is not the budget priority it should be, Kerry said. "If there is another al-Qaida attack on this nation, the first phone to ring won't be on Tom Ridge's desk at the Department of Homeland Security in Washington, D.C.," he said. "It will be a local 911 operator who answers the call and local police and firefighters and emergency medical technicians and health personnel who put their lives on the line." When it comes to defending the homeland, "the federal government has given many pledges, and then simply walked away."

One Kerry suggestion: "Invest federal seed money in a privately managed venture capital fund to develop anti-bioterrorism techniques, and encourage new companies to enter the field." Without this kind of outlay, he said, private companies have too little incentive to enter a tiny market where government may be the primary customer.

Kerry also expressed deep concern about the broad spying powers given to the government's USA PATRIOT Act, and suggested that it would be closely reviewed when its expiration date comes up next year. And he took a modest swipe at Attorney General John Ashcroft. "I am deeply concerned about where we find ourselves today in this country with respect to privacy, particularly with respect to the enforcement of some of the rights that are bedrock in the Constitution," he said. "We need an attorney general who represents a history of the best jurisprudence ... and who brings to that job everything but politics."

But the "clear and present danger" facing the U.S. today, Kerry said, is a dependence on foreign oil. In a nod to former President John F. Kennedy -- whose initials he shares -- Kerry stated his administration would set a modern-day man-onthe-moon goal to have 20 per cent of U.S. energy produced through renewable sources by 2020. "If America could go to the moon, then young Americans in decades to come should not have to be sent into battle for the energy to keep our economy alive," he said. "America can't drill its way out of this predicament. We have to invest our way out of it.

"Americans have been presented a false choice by, frankly, false leadership. We'll show them. It's not a choice between jobs or the environment; the environment is jobs."

Healthcare, too, has been manhandled by the Bush administration, Kerry asserted. While most developed nations consider healthcare to be a basic right, Bush proposes to cut the safety net. "States need a partnership with the federal government to deal with the fiscal impacts of what has become an acute healthcare crisis," he said.

However outspoken he was on the Bush domestic agenda, Kerry was carefully measured in his comments on Iraq after the speech. In a 15-minute question-and-answer session, he took only a handful of questions from the audience. In all, he spent less than five minutes remarking upon a war that now seems imminent.

And the international chaos of recent months proves the need to have a strong person in that position, he said, suggesting that neither Bush nor Secretary of State Colin Powell have measured up well in the job.

In 2002, there was clearly a path to the inspections process that brought legitimacy and consent to an international endeavor, he said. What led to its demise is an endemic unwillingness to strengthen relationships with European nations. "I don't know if they put the lock and key on the airplane so he [Powell] isn't allowed to travel," Kerry said, "but somehow this has been a secretary of state who's been unwilling to go over and build those relationships."

"I regret the way this administration has conducted foreign policy and given the back of its hand to so many nations," he said. "The United States, the strongest military power on the face of this planet, has not had diplomacy that matches it."

Perhaps Kerry's strongest statement about the war was a wisecrack. "There's a much cheaper, less complicated way to bring Iraq and Saddam Hussein to their knees," he said after Thursday's speech. "Send the Bush economic team to Iraq and let them run the country."