The Oscar-nominated story of German Jews in Kenya delivers just what the Academy expects from foreign films: Refined boredom. 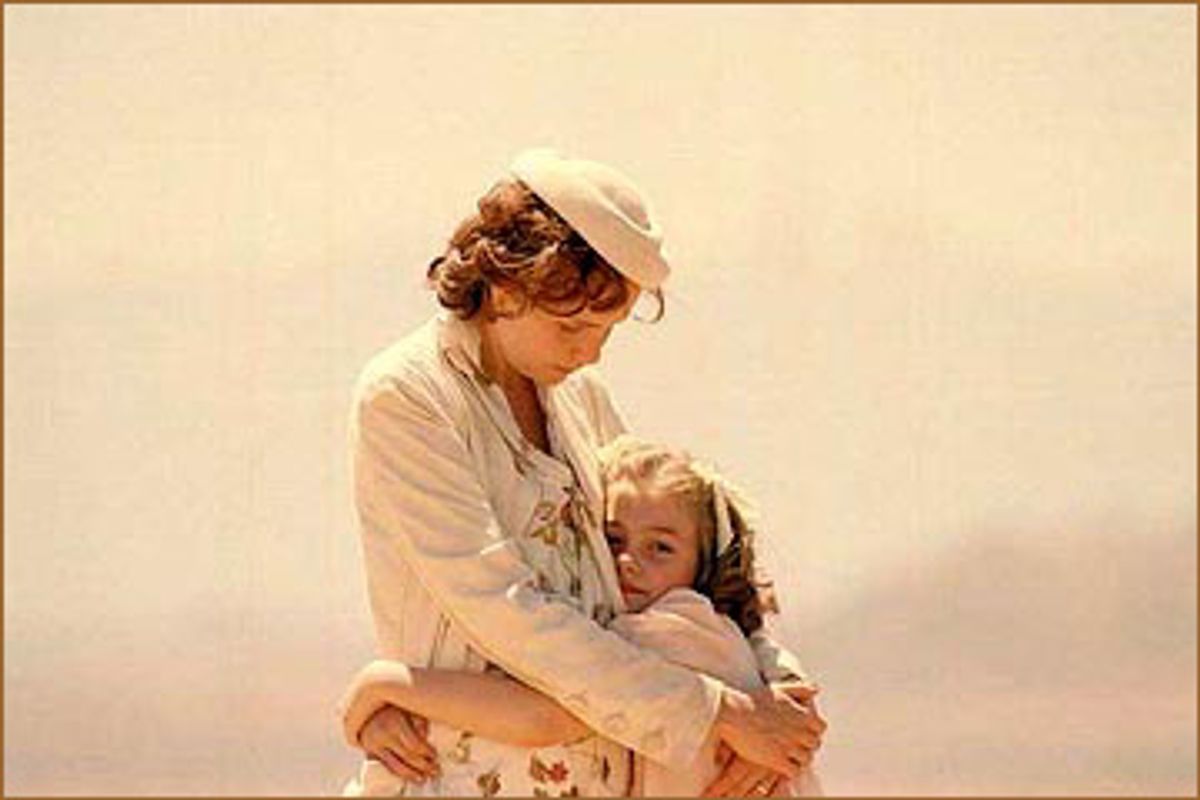 Long, ponderous and pretty to look at, German director Caroline Link's "Nowhere in Africa" is precisely the sort of picture that the Academy tends to go for when it's deciding the nominations (or the winners) in the best foreign-language film category. Based on an autobiographical novel by Stefanie Zweig, "Nowhere in Africa" tells the story of a family of German Jews who relocate to Kenya in 1938. The family's move from their comfortable, upper-middle-class surroundings to the dry, dusty and remote Kenyan landscape rattles the relationship between the parents, Walter Redlich (Merab Ninidze) and his wife, the beautiful, refined Jettel (Juliane Köhler, of "Aimée & Jaguar"). But their 5-year-old daughter, Regina (played first by Lea Kurka and later by Karoline Eckertz), adapts well, learning to love her strange, adopted homeland.

The first half of "Nowhere in Africa" focuses on Regina's experience of her new home, and it's the liveliest and most engaging part of the movie. Her father had traveled ahead, finding work on a farm before sending for Regina and her mother; he had also engaged the services of a cook and all-around helper, Owuor (Sidede Onyulo). Regina instantly forms a deep and affectionate bond with Owuor, one that immediately makes her new home feel less strange. And although the character of Owuor could be viewed as the movie's token happy, smiling African, Onyulo plays him as a real person: When he's on-screen, "Nowhere in Africa" is a pleasure to watch; he seems alive and real, like an old friend.

Unfortunately, the movie around him feels like another kind of old friend. In adapting Zweig's book, Link apparently shifted the focus from Regina's experience to that of her parents, showing how the strain of adjusting to their new life threatened to destroy their marriage. Link may have thought the "young girl adapting to weird surroundings" story had been done too many times before -- but sometimes there's a reason stories get told over and over again. Kids, who spend a great deal of time simply getting used to the world in general, are specialists in adaptability, which is maybe why their vision often seems fresher than that of adults. Link hints at a burgeoning romance between the adolescent Regina and a local kid, then leaves it hanging. We can easily assume that the friendship sputtered away to nothing. But why pique an audience's interest in one particular angle of a story if you're not going to do anything with it?

Meanwhile, Link's depiction of the marital strain between Walter and Jettel arcs its way through "Nowhere in Africa" like a worm creeping along parched ground, and you begin to groan every time you see another bitter argument or stretch of thin-lipped silence coming. When Jettel first arrives in Kenya, she makes it clear she has no intention of actually living in such a Godforsaken place. (She has remained willfully ignorant of the encroaching threat to Jews at home in Germany, while Walter, having sensed which way the wind was blowing, took early steps to move his family to safety, even though it meant trading his career as a successful lawyer for employment as a lowly farm worker.) Jettel is rude to Owuor, snapping at him when he begins unpacking the good china -- Jettel doesn't intend to stay long enough to use it. Moreover, although Walter had given her a list of practical items she was to purchase and bring with her (including a small refrigerator, sorely needed in the African heat), Jettel had taken most of the money and bought a fancy evening gown.

We're supposed to like Jettel, or at least sympathize with her, but it's almost impossible from the start. Köhler plays her as one of those willful, spoiled women who eventually understands the beauty of her new home, but by the time that happens, it's far too late. Meanwhile, circumstances change, the war finally ends (the family has received news that everyone they loved most dearly in Germany, friends and family members, has been killed by the Nazis), and Walter begins to hanker to return to Germany. By now, Jettel has become a sturdy farm lady, doing her part to protect the local crops from locusts and even donning that slinky evening dress, which has lain unworn for years, to attend a special village goat-slaying ritual.

By this point in the movie, Regina's experiences at the private school she has been sent to, and her subtle, solid relationship with Owuor, merit only a cursory scene here and there. And you start to wonder how, when the mere idea of persecuted Jews' moving to a highly unlikely locale is actually pretty interesting, a movie like this can be so stiff and dull.

To her credit, Link has been careful not to make her movie seem like a harangue: Jettel and Walter claim that they're not particularly religious Jews, and yet you understand how deeply the horrors wrought by the Nazis still affect them. The picture was filmed on location in Kenya, and Gernot Roll's cinematography shows us a land of sunbaked golds and soft gray-greens, suggesting that the Redlichs have traded their gaudy, noisy Western home for one of quiet, muted contrasts -- a trade-off that's wonderful in some ways and dispiriting in others.

But while "Nowhere in Africa" is lovely to look at, you still have to suffer through the dialogue. Unless you understand German, it's hard to know from the English subtitles whether the movie's clunky, often far too expository language is the result of bad writing or poor translation. But when Jettel asserts, early in the movie, "My mother says someone will have to stop the Nazis. Germany is a land of culture, the land of Goethe and Schiller," you've got the picture, and then some. "Nowhere in Africa" is the kind of movie that people who live in a "land of culture" should really like. The rest of us, who just like a good story, are left in the dust.