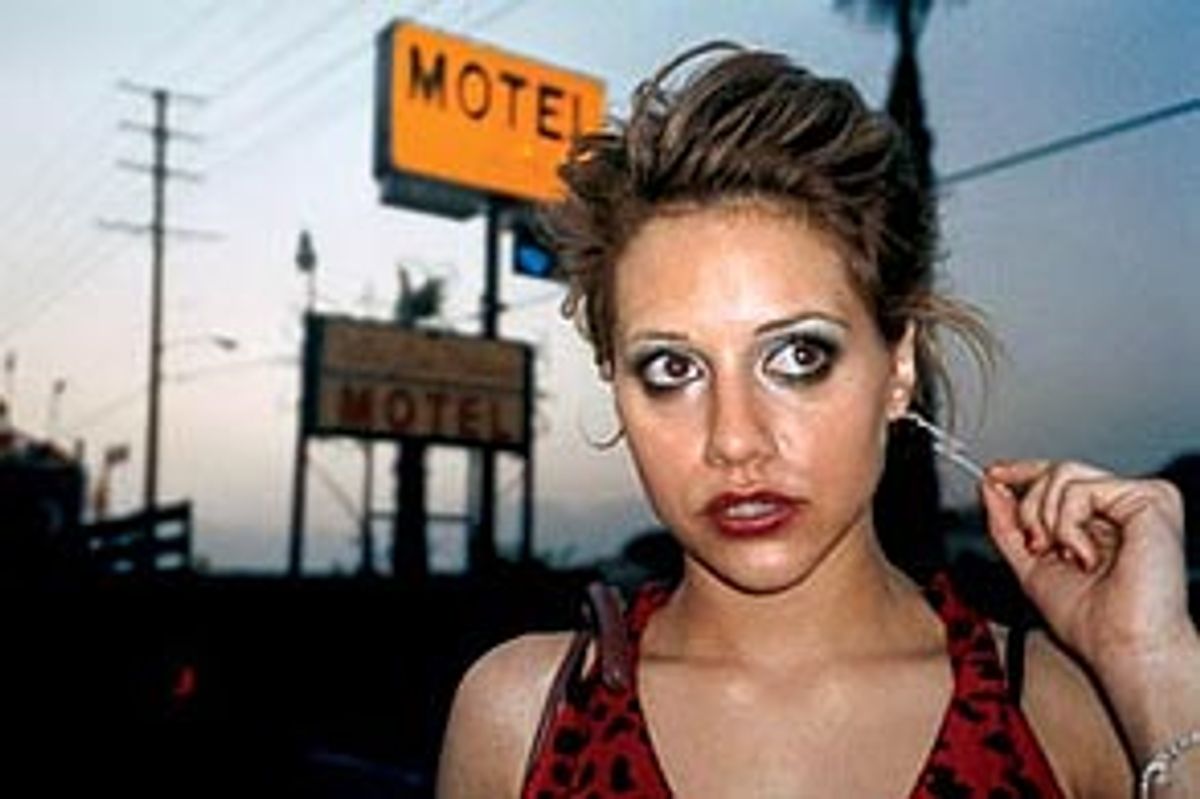 I hate "Spun." And one of the things that I hate about it is that I liked it so much. It looks horribly great, it has cool stars, and the vaguely indie-rock soundtrack is pretty good. The dizzying sensation of the movie is something like watching an hour and a half's worth of music videos on fast forward. It's a fun movie in a disorienting way, especially if you like hot clothes and can laugh at awful things.

But it's really a low, low movie, the kind of thing that makes you feel bad for liking it. It's moralistic about drug use, but at the same time weirdly glamorizes it by working so hard to make the movie itself so hip. (This is the kind of picture where even the buffoonish cops wear vintage Levi Sta-Prest jeans.) "Spun's" meta-message -- if there is such a thing -- is that drugs are bad, but you probably want to do a lot of them for a while so you can make some cool art or something. In fact, just say "crystal" and the dopest actors in Hollywood will run toward you.

There's also Spider Mike (John Leguizamo), a low-level dealer, and his girlfriend Cookie (Mena Suvari). They live and deal out of a trashed ranch house where kids like Frisbee (Patrick Fugit) come over to buy drugs, get high, and play video games. (Which are -- sound the hip alarm -- homemade and totally retro; you'll probably see a feature on them in Vice magazine next month.)

The story, inasmuch as there is one, wonders whether Ross will get back together with his girlfriend, who has left him and moved to Los Angeles, and whether Nikki will leave the Cook. There's also a subplot involving two bumbling cops who are speed freaks themselves (like everyone else in the film), and a recurring bit involving a stripper whom Ross fucks -- yes, fucks -- until he hallucinates dirty cartoons (the hip alarm is still ringing, right? Look for the cartoonist in a Japanese fashion magazine) and ties naked to his bed before leaving the apartment.

All this is to say that "Spun" is one of those episodic pictures. It apparently derives from the exploits of one of its co-writers, Will De Los Santos, a speed freak from Eugene, Ore. (The beginning of the film, which is co-written by Creighton Vero, announces "based on the truth ... and lies.") And it is real life in the sense that it's more of a vibe or a grind or something than a movie. The whole thing is stitched together with coherent production design and masterful editing.

In a way, "Spun" is editing. Its filmmaker, the Swedish music video and commercial director Jonas Akerlund, is known principally for Prodigy's jittery "Smack My Bitch Up" and Madonna's stop-start "Ray of Light." According to the film's production notes, the debut feature project started off with a 1,000-page storyboard comic book, every single shot of which was captured on high-speed 16-mm film once production started. The finished product includes 4,500 edits, or almost a cut every second.

And there certainly is some nice technique. One trick makes every object appear to us as the sum of its component parts. So when Schwartzman gets in his crappy-ass brown Volvo, we see the wheels turning, the pistons pumping, the fan belt whirring. The technique communicates that speedy sense of everythingallatonce. It's a style that bites "Requiem for a Dream" -- in particular the little impressionistic bits that recurred every time the characters shot up -- and makes no particular improvement.

As there was in "Requiem for a Dream" -- a vastly superior film -- a fairly conventional morality is at work in "Spun." Drug dealers get busted, rats get shot, and guys who fuck with women get beaten down. No bad deed goes unpunished. And in one sense, with all the brown teeth, groaning constipation, and Leguizamo jerking off in a sock, there's nothing sexy about the loser pageant. In all its bleached-out shots and hyper-quick editing, "Spun" is an anti-drug film.

Sort of. Because these guys still get to wear Diesel and look like John Leguizamo in a pair of low-rider leather pants. Or be a bad-ass cowboy like Mickey Rourke (playing his best role in years), and fuck Brittany Murphy. (Yes, fuck. In one of the film's most hilarious scenes Rourke delivers a "Patton"-like tribute to pussy, with an American flag waving in the background.)

The biggest problem with "Spun" is that it's really just about speed (and editing). And speed, like most other drugs, is in and of itself boring. (Have you ever had one of those three-hour conversations about pot? Stoned? It feels like time dying.) Further, the young-and-beautiful drug movie is finished -- at least until someone makes a genre tribute in 20 years. I can't imagine a picture saying anything that hasn't already been said better by "Drugstore Cowboy," the abject "Kids" and even "Trainspotting."

At this point, the only interesting drug movies are the ones that start with drugs and work outward, like, again, "Requiem" (about addiction and the death of the American dream), or "Jesus' Son" (about redemption and Billy Crudup). (It's worth noting that both evolved from novels.)