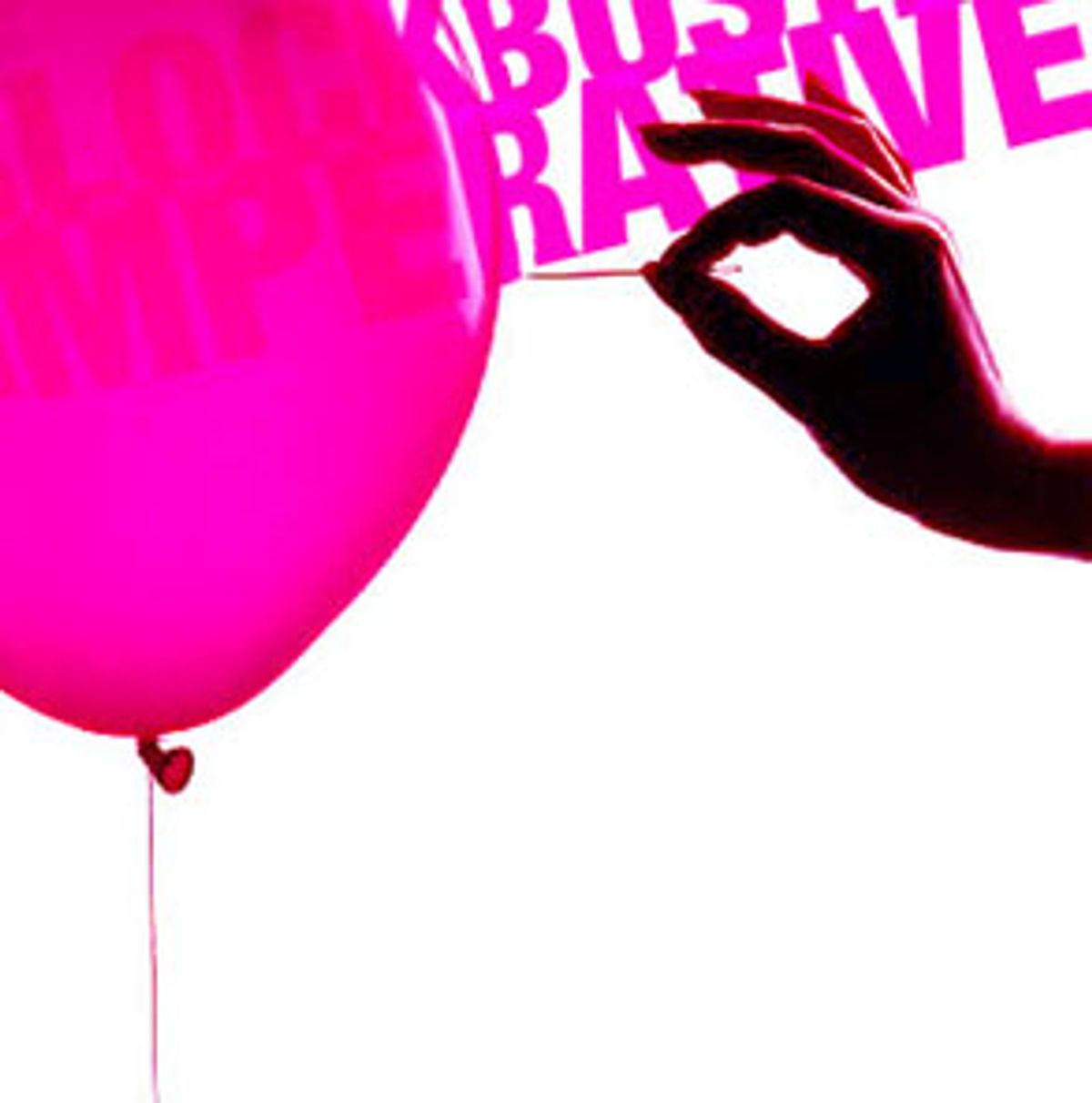 There should be a word reserved for the kind of nostalgia you get for crappy old things in spite of the fact that they're clearly bad: goofy ABBA songs you loved when you were 7 years old, ridiculous TV shows like "Fantasy Island" that you stayed up late to watch when you were 13, and juvenile movies like "Top Gun" that you knew were kind of dumb but liked anyway, because you were 15 and Tom Cruise had that dimpled, smug charm that appealed to you back before your brain was fully formed.

Just when you thought it was safe to go back in the theater, the Trio cable network trots out the worst that Hollywood has to offer in its documentary "The Blockbuster Imperative" (which premiered Sunday night and will air several more times through March 29; check local listings). In case last year's relatively worthwhile big-budget offerings like "Spider-Man" and "Minority Report" have you thinking "blockbuster" isn't a dirty word after all, this show unearths the misguided plans behind such disastrously bad flicks as "Godzilla" (the Matthew Broderick remake, not the rubber-suit Japanese original) and "Waterworld."

As it turns out, even the worst big-budget movies can incite a strange feeling of nostalgia. Either because they're so bad that they're never replayed and rarely mentioned, so a brief clip can feel as weighty as a picture or a letter that you haven't seen in decades, or because their style and tone recalls a time that seems, in retrospect, less self-consciously slick. The words "a more innocent time" tend to be reserved for everything before the era when hippies roamed the planet, and the Don Simpson and Jerry Bruckheimer '80s and '90s were anything but innocent. But movies like "Flashdance" and "Beverly Hills Cop" can't help but seem adorably naive in hindsight, even if Simpson was snorting lines and firing assistants for overtoasting his bagels behind the scenes.

This documentary charts the birth of the blockbuster era, starting with "Jaws," a production notoriously marred by the uncooperative behavior of the mechanical shark. With a razor-toothed diva on his hands, a baby-faced Steven Spielberg was forced to focus on the characters on the boat. Luckily, there were characters on the boat -- it's tough to imagine the pretty flesh monkeys from "Starship Troopers" comparing giant-alien-insect scars with any semblance of authenticity.

But the real suspense was created by studio exec Lew Wasserman, who scaled back the release of Spielberg's movie in order to create a feeding frenzy. Footage of huge lines of people anxious to see "Jaws" for the first time proved what junior-high kids sense instinctively, that half the battle of becoming popular lies in appearing to be popular. From that point forward, hype and manipulation of the public's perception became a major part of the studios' focus in rolling out big movies.

But hype was by no means a sure bet. After spending $200 million on a marketing campaign that began a full year before its release date, "Godzilla" flopped horribly, and some felt that overexposure was part of the problem. Screenwriter Dean Devlin seems to feel differently: "The problem with 'Godzilla' was the script I wrote. I didn't write a good enough script."

Some of the best footage in "The Blockbuster Imperative" comes from the stars, who were forced to say positive things about their awful movies. "It's great, it's really fun to watch," mutters a flinchy, disingenuous Helen Hunt, referring either to "Twister" or to "Battle of the Network Stars XIII," it's tough to say which. In contrast, Harry Shearer combats his contractual obligation to hype "Godzilla" by offering up deadpan, over-the-top praise. "That's one of the things I'm proudest of," Shearer proclaims in a self-serious tone. "Hopefully this might signal a new direction in Hollywood for the summertime."

While the powers of marketing are sometimes limited or even counterproductive, the ease with which a film can be marketed often determines whether it gets made or not. Patrick Goldstein of the Los Angeles Times asks, "How often are you going to make a movie that's much more sophisticated and a much more hard-to-sell premise, when you can say, 'J.Lo's a maid, she falls in love with a rich guy'? That's the whole movie in six seconds. That's the kind of movie that Hollywood wants to make."

Charles Fleming, the author of "High Concept: Don Simpson and the Hollywood Culture of Excess," sums up the kind of movie Hollywood wants to make in much more specific terms: "The first act, you've got a clever guy who's really attractive and really interesting but he's sort of flawed, and he's kind of arrogant. In the second act, bad stuff happens to him ... He's being challenged by something that's gonna make him figure out whether he's a real man or not. In act three, it turns out he's a real man. So simple that, you know, an idiot can understand it. And so universal that all idiots can appreciate it."

And all idiots should appreciate the documentary's analysis of the monkey-see, monkey-do trends that produced some of the crappiest movies of the '80s and '90s. Steven DeSouza, who wrote the screenplay for "Die Hard," recalls, "There was a period where every film was described as '"Die Hard" in a ...' There was 'Die Hard' on a boat, 'Die Hard' in a plane, 'Die Hard' on Alcatraz ..." Finally, producers approached him with an offer to direct a new movie, saying it was "'Die Hard' in a building." DeSouza shakes his head. "That's when I knew things had come full circle."

There's something oddly enjoyable about such tales from the moronic Hollywood crypt. But even when geniuses are at the wheel, success isn't assured. Countless producers and executives have spent untold billions of dollars over the past few decades trying to crack the code, but no surefire way to make a hit has emerged. Every time the powers that be think they've got it figured out, they fail horribly. These catastrophic failures -- "Ishtar," "The Last Action Hero," "Blair Witch 2" -- are easy to judge as awful and misguided in retrospect, but plenty of actual hits can seem awful and misguided, if you ignore their numbers at the box office.

What's really remarkable is that the most puerile movies can be just as memorable, if not more memorable, than the good ones. I still remember that scene in "Waterworld" where Kevin Costner rises to the surface of the ocean to find that his boat, which is pretty much his entire life, has been destroyed. His face is completely blank, and he says, "My boat," in that quiet monotone of his. The entire lackluster Costner era is summed up in that moment. Or what about that shot of Bruce Willis jumping from one building to another in slow motion, his gut shamelessly hanging out over his belt as he leaps?

Who better to deliver such "Moonlighting"-inspired lines as, "Eight million terrorists in the world, and I gotta kill the one with feet smaller than my sister!"? Or how about that scene at the end of "Total Recall" where Arnold Schwarzenegger and Rachel Ticotin are outside on Mars and their eyes start popping out, but then they're saved, and -- bonus! -- their faces somehow magically go back to normal. Wouldn't it have been great if they had stayed hideously ugly but they were still thankful to be alive? The resonance of such ridiculous scenes suggests that, for better or for worse, audiences will always flock to fantastically unrealistic, flashy movies.

As mediocre as many of these movies seem in retrospect, they're undeniably soothing to revisit, in all of their shameless lowbrow glory. Maybe nostalgia kicks in because times have changed so much since that summer when it still seemed oddly thrilling and funny, as opposed to genuinely frightening, to watch the White House explode in a spectacular burst of flames.