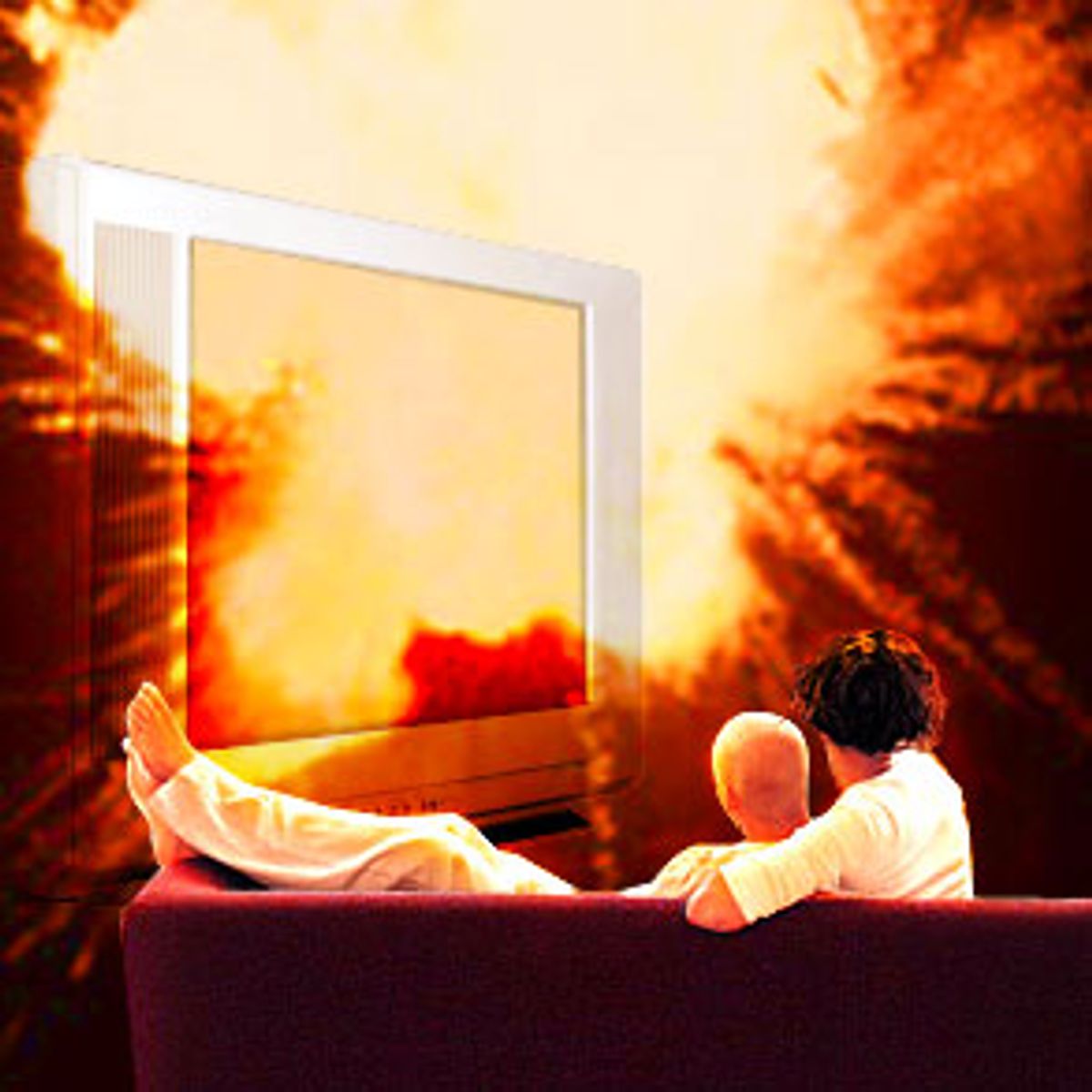 We don't want a war. But oh, we do. We want it bad. We don't actually want the consequences of war -- suicide bombers and a high death toll of innocents in Iraq. And we certainly don't want to fight this war ourselves. But we want to watch it. We like to watch.

This war is our new favorite reality show. And we love reality TV. But now we're beyond people eating slugs and getting voted off islands. Our hunger for reality programming is increasing. We want more graphics, higher stakes, greater losses. We adapt quickly. We become bored instantly.

This is why we want war. But we won't admit it. None of us will. We feign disgust at the way the media has turned the war into entertainment, but secretly, truly, deep inside -- it's what we really want.

I have no doubt that this war will bring the networks a ratings windfall. For at least a week, until it becomes ho-hum, we will all -- every one of us -- be glued to our sets in horror, fear and fascination.

"Joe Millionaire" picked the nice girl and now we're bored. We've had enough nice and we want some dirty.

But the networks had better be ready. Because after war, we will need sex. We will need a show called "The Virgin" where a 15-year-old girl from Nashville will sell her virginity to a man for $1 million. She will go on a single date with each of 10 men, and then she will have to pick one. But what she won't know is that each pig will be more loathsome than the last. Old, fat, unfit for a beautiful, fresh young virgin. But ... she will have signed a contract so she'll have to choose. And on the last night, when she finally makes her decision, she will sleep with him. On camera. As a pay-per-view special.

The news networks will be horrified by this show, which lacks a moral foundation and completely exploits young people. This will be anti-family programming and news hosts will debate it. And, of course, it will be huge.

And then, naturally, it will seem tame to us and we will need more. Something darker, worse, more corrupt. We want to go places we don't dare go in real life or in our minds. We want television to do what it could have done all along -- transport us. Not just to the set of a game show, but into the dark and rotten and secret corners of ourselves.

Michael Jackson excited us again recently. First, with his baby-dangle and then with the documentary where he was tricked into being himself. We love Michael. But he is no substitute for exploding cities and CNN reporters -- like sexy and confusing Bill Hemmer -- live in Baghdad. In a perfect world, we would go to war at the same time that the infamous pictures of Michael Jackson's penis surfaced on the Internet, just as some former child came forward with fresh charges. Then we could gorge. Alas, life is never so perfect, so we will have to make do with war.

But we don't want a war. But we do. We want it bad. Our lower brain stem craves war because we are animals. Civilized, Lexus-driving, and child-loving, but animals nevertheless. And we are fascinated by the attack.