On our last day in Iraq, people say farewell and ask us to take their photographs. They think it will help if Americans see their faces, that maybe then they won't drop the bombs. 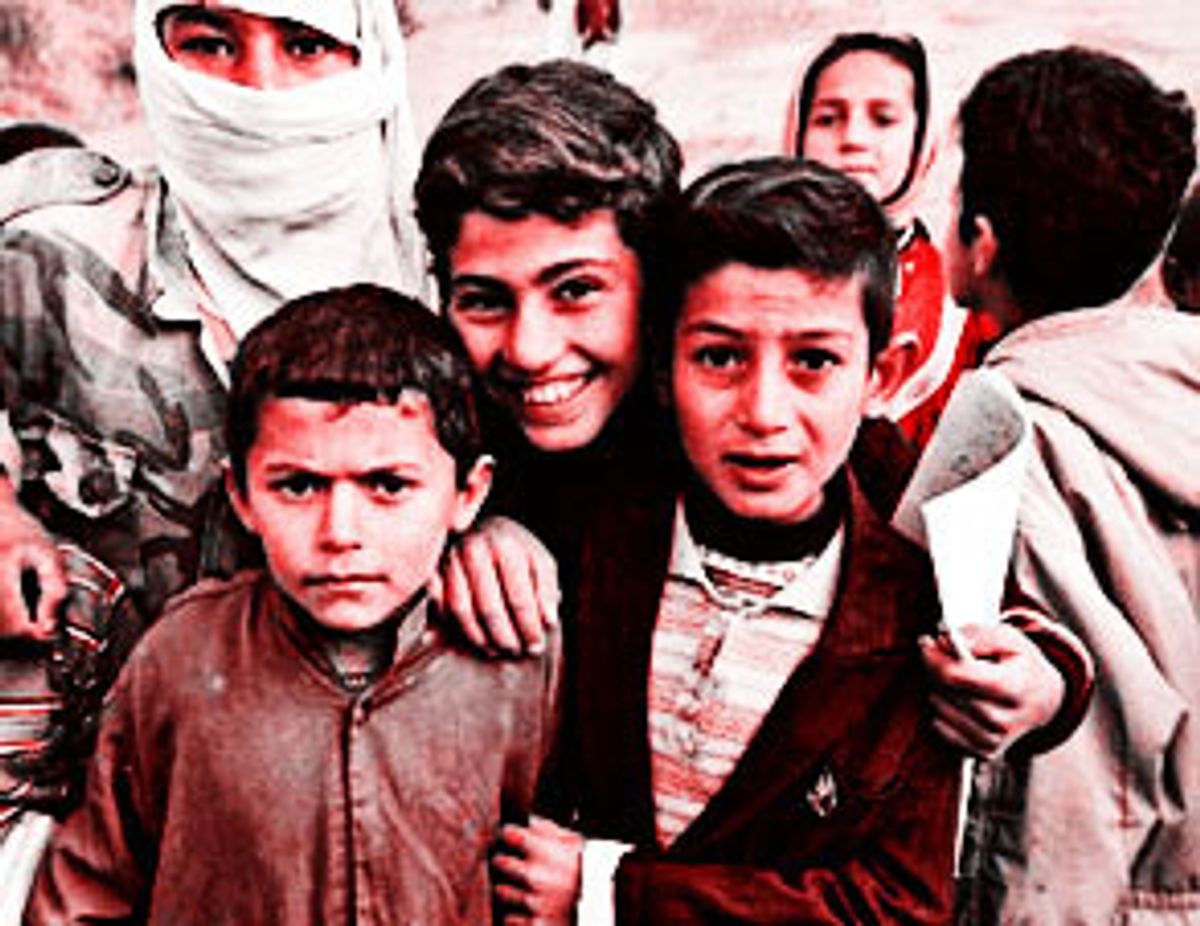 A few weeks ago I stood outdoors in Baghdad talking with two men in their 20s who sell cigarettes from a street cart. The more gregarious of the two, whose English was excellent, asked me outright, "Isn't your country a democracy? Doesn't George Bush have to listen to his people if it's a democracy?" His friend chimed in with the questions I'd been asked a half dozen times already that morning, "Will he bomb us? Can't you make him see that we are not against Americans?"

The argument we hear in the United States - the one President Bush repeated in his speech to the nation Monday night -- is that we are not against the Iraqis, but against Saddam Hussein. That the sanctions and the impending attacks could have been stopped had Saddam Hussein acceded to UN demands. But that argument doesnt ring true for the dozens of Iraqi people I spoke to. I was told before I went not to ask the Iraqis how they felt about Saddam; speaking about him could get them in serious trouble. So instead our conversations focused on this country. They blame the U.S. government for their suffering during the Gulf War and the subsequent 13 years of sanctions. To a person they say they love Americans but despise our president and his administration.

I spoke to these men two days after Secretary of State Colin Powell made the U.S. administration's case to the U.N. Security Council, presenting what he called "solid evidence" that Iraq had not complied with resolutions calling for its disarmament, and the morning after George W. Bush made a speech at the Pentagon saying, "The game is over. Saddam Hussein will be stopped."

This speech had been given considerable coverage on Iraqi television news, and the mood in Baghdad had changed overnight. On this morning, in almost every building, people were fastening tape onto windows to keep the glass from shattering when the bombs started falling. Men were filling old generators with fuel to prepare for the inevitable electrical power outages that would occur if the city were attacked. They welded scraps of metal together to use as shields to protect their homes and businesses. Everywhere we went, we were asked if we could stop the war. The Iraqis knew about the massive antiwar protests in America and asked us why George Bush wasn't listening to his people. They were worried sick, and there was little I could say to reassure them. I was worried too, because now I knew these people.

My husband, George Sapio, and I had been in Iraq for a week with 10 other Americans on a peace and humanitarian mission sponsored by Global Exchange, a human rights organization. We'd started out half expecting an armed citizenry aiming its weapons at us, filled with hatred of Americans. Instead we'd found a country devastated, but filled with kind, hospitable people. Everywhere we went we were met with welcome, generosity and gratitude for our willingness to be there right now, at this time in history, at the brink of this war.

Our group was a "guest of the government," so for much of our stay, we had "minders" accompanying us. But when not on official visits we were able to break away and talk to whoever we wanted, free from surveillance. Even if we were largely seeing what the government wanted us to, the suffering we witnessed was real. We visited a children's hospital, an orphanage, food distribution sites, an oil refinery, weapons inspectors' liaisons, women's groups, a sewing factory, a mosque, the private home of a high holy imam. We went to the site of the Amiriya bomb shelter, where at 4:30 on the morning of Feb. 13, 1991, more than 400 people, mostly women and children, were vaporized by a U.S. "smart bomb" as they slept in this "safe place" where they'd sought refuge. The bomb caused the temperature in the shelter to rise to 900 degrees Fahrenheit in moments; the bodies were incinerated, the remains blasted into the concrete floor. We stared at the outlines of the children sleeping curled up or stretched out, some of them hugging a sister or brother or mother. One woman was standing, breast-feeding her baby, when the bombs hit. Her image is burned into the concrete wall, her mouth frozen in a scream.

We traveled to neighborhoods, were invited to the homes of families for conversation and meals. We attended a brilliant theater production, a concert of traditional Iraqi music, and went to the studio of a prominent Iraqi painter. The artists we visited had very little to work with. The actors and director of the ensemble comedy were starved for news of theater from outside Iraq. The musicians said they were so alienated from the world of music, what with no new sheet music, CDs, or tapes. The painters have little or no access to canvases or oil paints, which are banned because they are considered "dual-use" items, and could be employed to manufacture weapons of mass destruction.

The situation in the hospitals and schools, of course, is even more devastating: not only is there a severe shortage of medicine and equipment, but there is barely any potable water. Iraq had a sophisticated healthcare system and excellent education system before 1991; both were free and provided by the government. But water treatment and sewage plants throughout the country were destroyed during the 1991 bombings, and more than half of them remain inoperative. Every day some half-million tons of raw sewage are dumped into the Tigris and Euphrates rivers and other fresh water sources. Sanctions don't allow chlorine, used globally to purify water, into the country -- again because of its potential to make weapons.

About half the 24 million Iraqis are children under the age of 15. In 1989 the Iraqi infant mortality rate was 40 per 1,000 live births. In 1998 it was 103 per 1,000, according to a report released In January by the Interntional Study Team. Since the Gulf War and the U.N. sanctions, an estimated half million children have died of treatable diseases. Chronic malnutrition is a way of life for millions of children and adults.

When people's bodies are already under stress from deprivation and fear, and when basic sanitation isn't available, other diseases can become epidemic. The director of the Al-Mansour Pediatric Teaching Hospital in Baghdad, Dr. Luay Kasha, told us, "Hepatitis A, hepatitis B, cholera, dysentery, typhus, and malaria are rampant. Cancers have skyrocketed. There's a lot of depleted uranium lying around. We're facing the after-effects of the nuclear pollution. We see leukemia, lymphomas, soft-tissue sarcomas. We see five times higher congenital deformities than before 1991, many miscarriages and ectopic pregnancies."

Treatment is almost nonexistent. "There are eight radiotherapy machines in Baghdad," said Dr. Kasha. "Five are out of service. Two date from the 1970s. France sent this one machine. There is a waiting list of more than three months to use it. That means it is too late for most people."

That truth hit hard in the children's leukemia ward. Every child we saw there will likely be dead in a few months. All the kids were accompanied 24 hours a day by their mothers or grandmothers. Adhra Zeyad is 8 years old. He'd been in the hospital for three weeks. He was dying, but his mother, a beautiful woman named Atared, didn't know it. She said to me, "He will be better soon. The doctors are making him better." The doctor later told me, "How can we tell her the truth? How can we tell any of them?"

In another city -- Topeka, Boston, Fort Lauderdale, or even Riyadh or Amman -- these children would be treated with the latest medical technologies, and their lives would be prolonged, and maybe even saved. But here there is no chemotherapy, because it requires chemicals, which of course are banned. There isn't even aquatherapy for children with muscular dystrophy, cerebral palsy and other diseases because pools require chlorine. We watched an 18-month-old child with cerebral palsy wail in pain as the physical therapist worked on her limbs. Her agony could have been largely avoided, the treatment more humane, if she'd been given the same therapy in water.

Nearly a quarter of the children of Iraq do not attend primary school. They are too busy helping their families earn money by shining shoes, peddling, herding sheep and goats, or begging in the streets. And besides, the schoolbooks are ancient and the school supplies hard to come by. Many of the schools don't have working bathroom facilities or running water, let alone the resources to feed the children during the school day. One woman, when asked if her daughter went to school, told me, "She is always sick, so she stays home with me."

As we leave the hotel on our last day in Baghdad, people from the neighborhood join the hotel staff and the police and military men who have been assigned to the area during our stay. They come to say farewell, to be sure we take their photographs. They smile and wave, blow kisses, flash us the peace sign. They want us to show their pictures back in the United States. They think it will help if Americans see their faces. They think that once Americans see them, recognize that they are simply human, and in need, they might not drop the bombs.

Maura Stephens is a writer and editor in Ithaca, NY.