Saddam may have survived the first strike, but one expert doubts the regime could withstand the dictator's death. 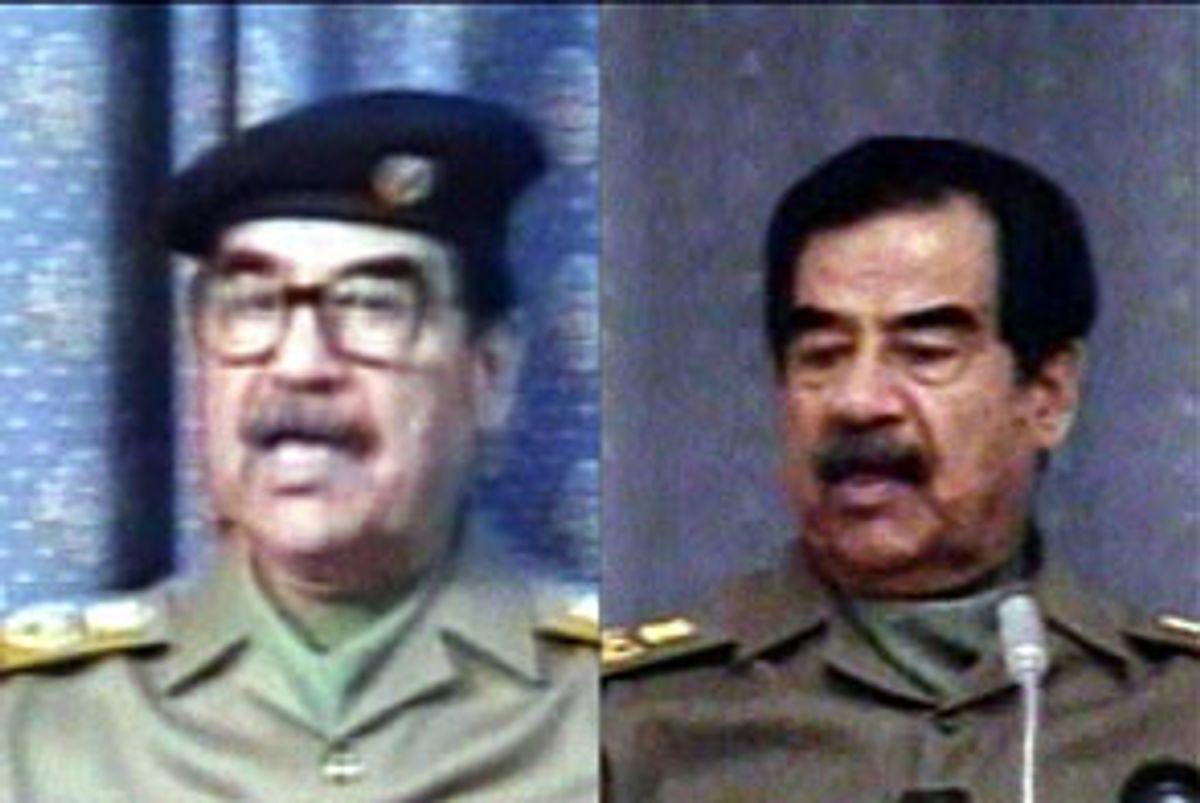 Is he, or isn't he? That's the first unanswered question of the new war.

Following the laser-guided missile attack Thursday morning on Iraqi leadership targets in Baghdad, United States intelligence analysts were trying to determine whether Saddam Hussein might have been killed by the 2,000-pound bomb.

Without U.S. troops on the ground in Baghdad, it may be impossible to tell. But analysts were intrigued when, hours after the attack, Saddam, or a man who looked to some like a Saddam body-double, appeared on Iraqi TV to denounce the bombing.

In this unique, preemptive, regime-changing war, where the U.S. has said it's essentially battling one man, and not an entire country, the question of if and when Saddam is killed becomes paramount, says John Voll, a professor of Islamic history at Georgetown University in Washington. Indeed, broadcast reports Thursday said the Pentagon had put the "shock and awe" phase of the bombing on temporary hold as it tried to determine whether the Iraqi leadership was already unraveling.

Inside Iraq, the question also looms large. "It's not as if Saddam's a symbolic linchpin," Voll told Salon in an interview Thursday. "He's the operational linchpin." Voll stressed that even if Saddam survived the early attack, if he were eventually removed from the equation, his regime could quickly collapse -- especially if the dictator's inner circle turned its collective back on Saddam's heirs.

I'm interested in the "what-if" scenario: What if Saddam were taken out early in the battle? Could his regime survive?

One of the keys is the degree to which the Iraqi military high command is in fact unified, or if the only thing that keeps them together is a live Saddam. If so, then everything collapses.

But if the high command is unified, they don't have to admit that Saddam Hussein is dead. Because there are all these Saddam Hussein doubles around. They can drag out one or other of these doubles.

And that sends a message to the people?

Yes, that Saddam is still alive. You get this whole possibility of having an almost endless supply of doubles. But that scenario only works as long as the high command stays tighter and is unified.

When you mention Saddam's high command. How many people are we talking about?

I would say effectively we're not talking about more than five or six people. And then there are 10 to 15 who are always lurking around. They're the inner circle who are the command modules, if you will, for most of the major military units. That particular inner core can continue to run things unless we succeed in destroying most of the communications networks.

What's the significance there?

Then you get freelance warlord-ism . If you get division at the top, or a really effective breakdown of military communications, then the local military commanders will be on their own and may just set up shop where they are. It's what we found in Afghanistan. If people had their solders, they can set up shop and engage in negotiations with the United States forces.

Who would take over from Saddam if he were killed?

He has a son, Qusay, who's been designated an heir. And I think that son has really good control over the most elite units of the Republican Guard.

Now there are some reports out the Middle East, I'm reading the Islamic Republican News agency: "Uday, the elder son of Iraqi President Saddam Hussein, struck by a brain hemorrhage following a conflict with a member of Saddam's Fedayeen Thursday."

"Mosuah al-Nahrain in its Web site on Thursday quoted sources north of Iraq as saying that very tough and indecent orders, issued by Uday, who heads Saddam's Fedayeen, had provoked the conflict as the young man attacked Uday. Uday's bodyguards then beat the man to injury." What do you make of that?

Of course, any narrative like that is totally credible given what people know about Uday.

He's a brutal thug. And he might have been beating up on this guy and the guy beat him back.

That's the special guard, within the guard. That's the real elite corps. They're essentially family bodyguards and special palace guards.

In that high command of five, what if one of them, learning that Saddam had been killed, decided, "I'm out"?

He'd have to be very careful.

If Saddam were alive, would they still put that body double on TV? Or if he were alive would he definitely want to be on TV?

I think there's a good likelihood that this guy was a double this morning even if Saddam were still alive. He'd be quite willing to put the double on the line just so he could remain in a secure place.

How difficult would it be to prove that Saddam Hussein had been killed, with all these body doubles?

For an outsider to prove it, it could be very difficult. The worst-case scenario from the part of the regime is that a coalition commando force happens to find him in the right palace and can get him into a helicopter and can whisk him away so they can prove he's no longer in control.

If he were killed early on, do you think the chances of the regime unraveling are very likely? How would you stack the odds?

I would say if the real Saddam is dead at some point the dynamic of rivalry among the inner core would mean the regime would unravel from the inside.

That's the only real question; how long would that take.

How successful would Saddam's son be in creating a seamless transition? Or is that where the doubts from the high command come in?

That's where the doubts come in. All of the people in the inner circle recognize Saddam is, for better or for worse, basically a tactical and strategic political genius. I think they see his sons as not being in the same level but rather being very, very dangerous thug-type people. Those would not be people they'd want to follow.

So would members of the high command try to seize that power or simply walk away?

It depends. If the son maintains the control over the inner force, it becomes dangerous to try to seize power. But if there is any kind of shakiness in his control, or if he's had a brain hemorrhage, than the idea of walking away from the inner command might be a more likely event.

If there was a revolt among the high command, would they try to regroup and fight the American forces, or would their national reaction be, "He's gone, that's who they wanted, let's end this now or we're going to be obliterated"?

Right, they would then begin to bargain to be the Saddam replacement.

Would anyone take over from Saddam and fight to the end, other than his sons?

Other than his sons? I don't see anyone who would fight to the end.

I'm not sure I'd use that word. They would pull back and try to bargain or negotiate. It's sort of the warlord option. Of seeing themselves as people who still have something to offer the coalition.

What is it that keeps the Iraqi regime together?

It's a combination of the military, communication and a very sophisticated internal secret police that has worked very effectively for years.

You mentioned the secret police. They're so powerful. Who would they follow?

Now you're asking for my most cynical answer. In these types of secret police operations, they seem to be very professional and tend to sell their services to whoever happens to be in power.

Right now they're loyal to Saddam?

They're loyal to whoever pays them.