In a time of war, our troubled nation yearns for fat guys telling fag jokes and black men dancing. Hollywood answers the call. 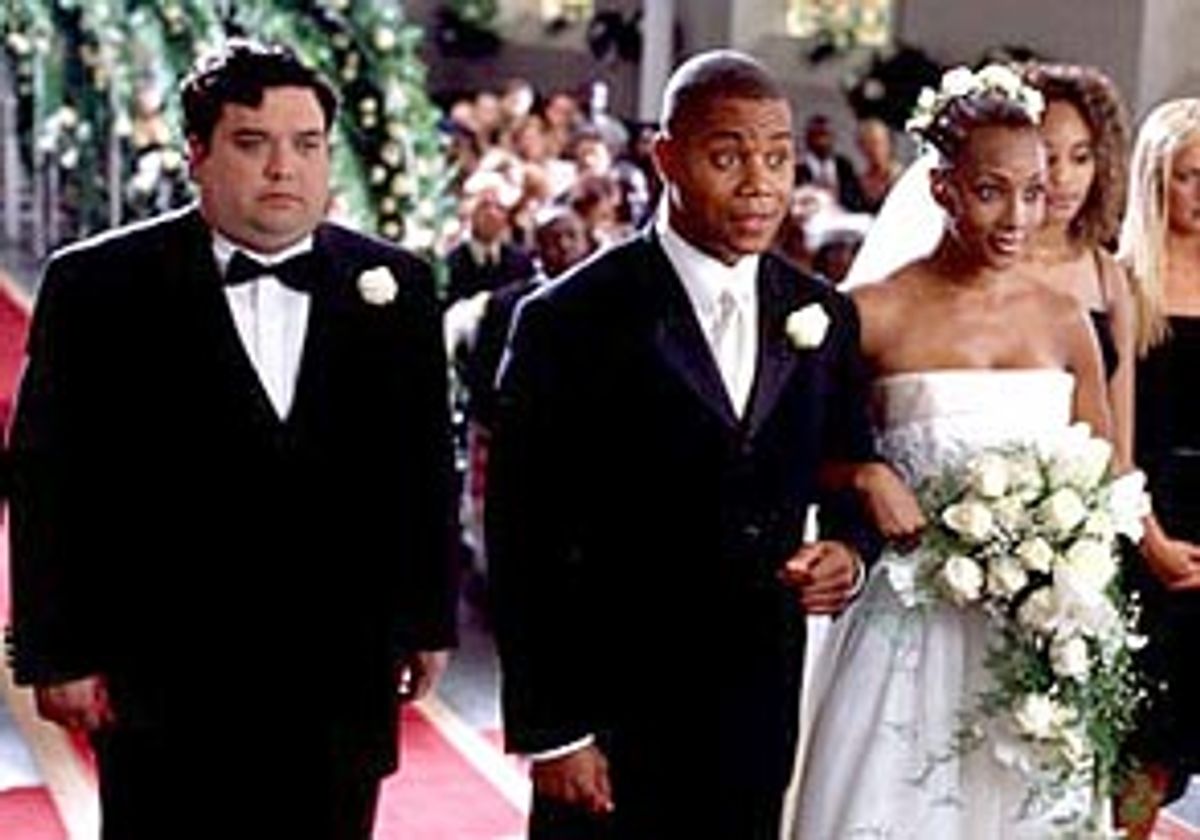 With the country braced for war, a somber mood was evident in a Manhattan screening room Tuesday at a showing of the new film "Boat Trip." Barely a ripple of laughter passed through the assembled critics during the film's 95-minute running time.

Reportedly, many media organizations had considered pulling their critics from the screening, less for safety concerns than due to the fact that nobody cares about "Boat Trip."

But, reasoning that the public needs to be entertained in a time of national crisis, vacation time and personal leave have been canceled for many critics, who have been pressed into service for the crucial job of covering new movies. "Not everyone can report from the front lines," said one critic who asked not be identified. "This is our way of doing what we can for our country."

Despite the quiet reception from the invited audience, it's clear that the film itself honors that same spirit of service. The story of two bachelors (Cuba Gooding Jr. and Horatio Sanz) who find themselves mistakenly booked onto a gay vacation cruise, "Boat Trip" attempts to transport audiences to a happier time in American history. With its homo jokes, dick jokes, drunk jokes and tit jokes, "Boat Trip" recalls the lighter years of the Reagan administration, when comedies like "Porky's" and "Bachelor Party" provided laughter for moviegoers happy to check their brains at the door.

Nonetheless, the harsher reality of our current conflict is clearly evident in the film. Attempting to deflect any anti-Arab prejudice that may surface in the country during the upcoming invasion of Iraq, the film resurrects stereotypes of a simpler time, soothing the audience with an almost endless stream of fag jokes. Even Gooding, the film's star, pitches in, happily playing the bug-eyed black man in some scenes, and even reviving the ever-popular "Brother Jiving to Soul Classic" routine (set to James Brown's "I Feel Good") in the opening scene.

With the United States nearly isolated in the world community and Britain among the few allies who support our war against Saddam Hussein, it's fitting that Roger Moore shows up. In an inspiring demonstration of the transatlantic solidarity that may soon cost British Prime Minister Tony Blair his office, Moore, throwing all thoughts of his own career to the wind, hams it up in the role of "Old English Queen Not Named Elizabeth."

Just as earlier generations of Americans found themselves fulfilling new occupations during previous times of war, Mort Nathan, a veteran producer and writer of such TV comedy hallmarks as "The Golden Girls," finds himself in the unlikely position of directing a feature film. It is a testament to our national determination that Nathan is not stymied by his almost complete lack of talent, his slipshod timing or his crude comic sensibility.

How this will play to Americans nervous about the days and weeks ahead is still uncertain. It may be that with war upon us, the makers of "Boat Trip" will be left asking, "Where is the laughter?"

In New York, this is Charles Taylor reporting.