Sploosh! In this humorless, big-budget Stephen King gross-out, slimy aliens land in the toilet and someone forgets to flush. 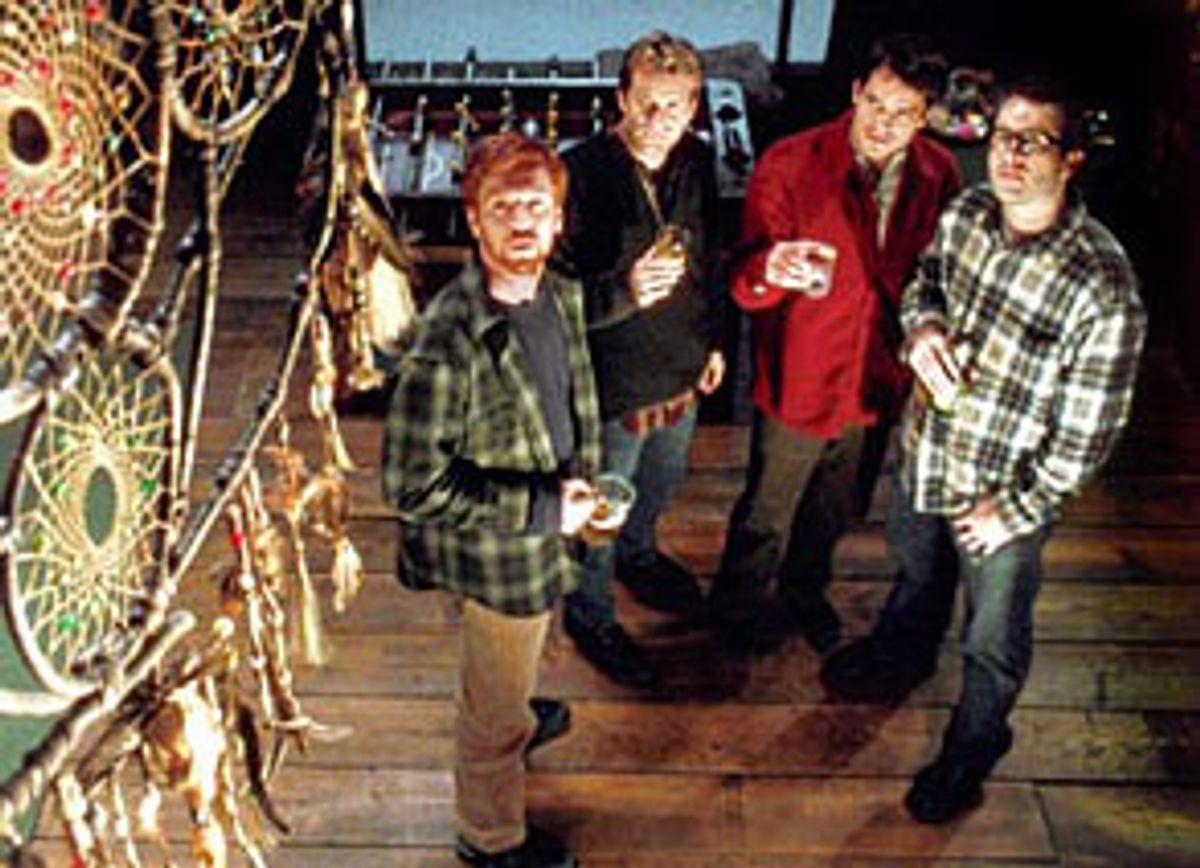 When I was a kid, I loved looking at the newspaper ads for the horror movies I couldn't get in to see (and was too squeamish to see if I could have) and imagining what they must be like. Later, I loved reading the descriptions of those movies in things like "Psychotronic" and marveling at the gross-out scenarios they contained.

So it's a strange feeling to be watching a movie where aliens invade people's bodies, gestate and then make their way out via the poop chute, and to be watching it not in some grindhouse but in a plush studio screening room.

The way those squirmy, squishy alien thingies make their way out of the bodies of their human hosts sounds like a great gimmick for the Sam Raimi of the "Evil Dead" movies or Stuart Gordon. But "Dreamcatcher" isn't the work of some gonzo horror-movie satirist, and it isn't a grade-Z picture on a triple bill at the drive-in with "I Drink Your Blood" and "The Corpse Grinders." It's an A-list movie released by a major studio (Warner Bros.) with a prestige director (Lawrence Kasdan) and a name screenwriter (William Goldman, who co-wrote with Kasdan). The movie is so conscious of itself as a big movie that it doesn't have any of the gross, disreputable humor that a director like Raimi or Gordon would have brought it. The infected humans fart and belch while the beasties are rooting around their insides, and they grow what look like rancid cranberry bogs on their skin. It's all presented without a smidgen of humor, and while the movie is fairly unpleasant (and fairly gross) it's also, finally, so ludicrous that you begin to wonder if it isn't all a big put-on.

I haven't read the Stephen King novel the movie is adapted from, but if his name weren't on the credits you might suspect it was the work of rip-off artists who'd stolen all the elements of King's work -- the worst elements. The movie revels in adolescent gross-outs (all overlaid with an aura of morbidity) and the sentimentality that dogs King. For those of us who've been trying to convince people for years that King is a novelist worthy of their time (his latest, and reportedly last, novel, "From a Buick 8," is a fine piece of writing, as was "Bag of Bones" a few years back, and "The Shining" and "It"), "Dreamcatcher" isn't going to do any favors.

Like several of King's yarns (such as "It" and the short story "The Body," which was adapted into the film "Stand by Me"), "Dreamcatcher" is about the ties that bind a group of kids. The four kids in this case are grown and they find themselves all thinking of their childhood friend, a retarded boy whom they saved from being abused by local bullies. In return, the boy, Duddits (it's the way his speech impediment produces the name "Douglas"), invests them with the power to read each other's minds. He is, you see, not just retarded, but special. Twenty years later, the four have repaired for their yearly boys' weekend at a country cabin. Various disasters start piling up -- a paralyzing snowstorm, encounters with those belching and farting humans acting as alien incubators, and the entire area being quarantined by an elite secret squad of the United States military.

The head of the soldiers, Col. Kurtz (he's played by Morgan Freeman and his name should give you an idea of his grip on reality) has been fighting the slimy invaders for years and he's bent on killing all the infected residents to stop the creatures from taking over humanity. His second-in-command, Underhill (Tom Sizemore) raises the possibility that not all those infected will be taken over, and he begins to suspect the colonel has become so obsessed he's gone mad.

That alone might be enough to suggest the insanity of "Dreamcatcher" -- a movie where Tom Sizemore is the voice of reason. But it just took everything I had to relay that plot with a straight face. And that's only part of the plot. Relating the plot of "Dreamcatcher" to people who haven't seen it is a great way of determining just how much credit your friends are willing to give you for sheer imagination. If they say, "Oh, come on! You must be kidding," then you know they hold your powers of invention in high esteem and are investing you with a capacity for absurdity that many people couldn't achieve even with chemical assistance.

King's novel often cuts among various threads of his story, and Kasdan and Goldman (I'm waiting to hear how the latter justifies this one in his next screed about the demise of quality moviemaking) appear to have worked in the same way. Instead of simplifying the plot, they let the looniness pile up and don't even bother to answer some of the key plot questions. At the end, you're left wondering whether any of the poor quarantined bastards in the infected area withstand the infection or if they're all slated to become collateral damage.

The four actors who play the friends -- Jason Lee, Thomas Jane, Timothy Olyphant and Damian Lewis -- are uniformly bad, though Lee does try to inject some of the same manic scatological quality he had in "Chasing Amy." Lewis, who has to play both his own character and the head alien who's invaded him (and who, for some reason, is called "Mr. Gray"), is especially bad. Morgan Freeman must be just as tired of giving the same damn stolid authority-figure performance again as I am of watching it. What happened to the wily actor of "Street Smart" and "Driving Miss Daisy"? Occasionally you catch a glimpse of him (the last time was in "High Crimes") but those sightings are rare.

"Dreamcatcher" is a pretty good example of how the studios have taken over the junk that used to be left to the exploitation hacks. The hacks here have millions to work with and the end result isn't nearly as much fun as a cheap, gross horror movie can be. If you're going to make a movie about aliens that squirt their way down the crapper on the road to world domination, is it too much to ask for a sense of humor?