Bombs fall on the northern front

As American airstrikes pound Mosul and Kirkuk, the small Kurdish town of Kalak is protected by lightly armed militia, as U.S. special forces hover nearby. 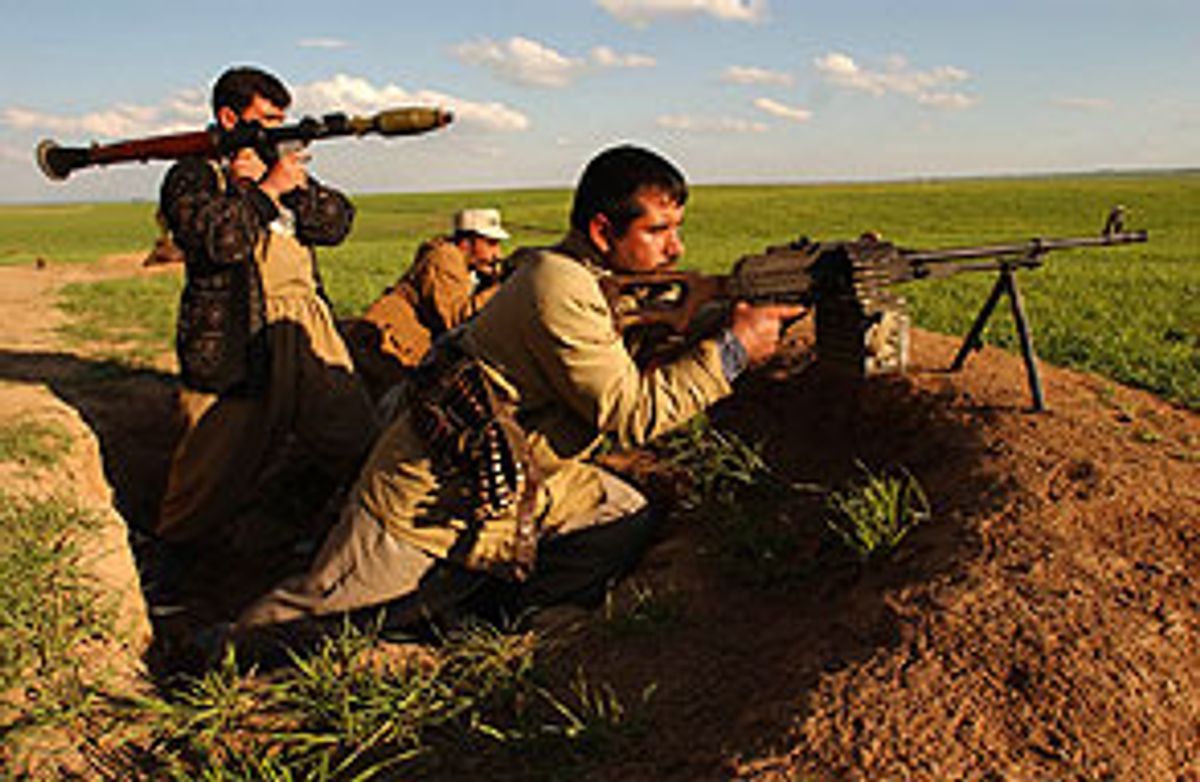 As American and British troops raced to occupy southern Iraq, most of the residents of Kalak, a small northern town pinned between the Saddam-controlled area and Kurdistan, have fled and left the place shuttered. About 30 miles east, American airstrikes hit Mosul, and the crucial oil city of Kirkuk also came under U.S. attack. Members of the peshmerga, the informal Kurdish militia, walk the streets of Kalak lightly armed, while Iraqi soldiers on a nearby ridge fire Russian anti-aircraft weapons and high-powered rifles in the direction of the town. It is not always clear whether they are shooting into the air or aiming for specific targets in Kalak.

American special forces are operating in northern Iraq under a blanket of extreme secrecy. The peshmerga typically welcome reporters warmly. For the most part, we have maximum freedom to write, report and photograph people and places in northern Iraq -- except when Americans are involved. Then peshmerga can be used as a cordon -- they block us from sites, force us to delete images from our cameras. Members of the U.S. special forces were seen in Kurdish military headquarters in Arbil, meeting with senior Kurdish commanders.

Kalak's defense, though, appears to rest entirely with the local militia. And the peshmerga are outnumbered and poorly equipped. To make matters worse, Kalak is a victim of geography, stuck between the front lines and the fast-moving Zab al Khibir River. The town, with the river dividing it from the rest of Kurdistan, seems an attractive target for Iraqi forces who want to slow down an advancing American army. Two bridges join Kalak to Kurdistan; the new bridge is partially under Iraqi control, while the Kurds control the old stone and steel bridge. Some observers in Kalak this morning speculated that the Iraqis could come down out of the hills, take the town and place charges on the second bridge. Fear drives much of the speculation here.

Also on Friday, Turkey moved 1,000 soldiers into northern Iraq to beef up its forces there, and is on the verge of shifting another 5,000 soldiers to the border region. Turkey already maintains several thousand soldiers backed by a few dozen tanks in northern Iraq, to chase Turkish Kurdish guerrillas. So the peshmerga could wind up fighting Turks as well as Iraqis in the days to come.

Early on Friday afternoon an Iraqi sniper targeted a young Kurdish man observing the Iraqi positions through binoculars. The bullet slammed into a wall behind him, lodging itself under a sign that read "Kalak Azadi," or Free Kalak. Then, as the spring afternoon came to an end, Iraqi firing from the ridge grew more frequent and the sound of guns echoed off the rolling hills. Those left in the town took cover in doorways and houses.

The situation has changed dramatically in Kalak since the start of the U.S.-led invasion, and it is rapidly becoming more volatile. As recently as three days ago, the road to Mosul, 35 kilometers away, was open for people who wanted to cross into Kurdistan from Iraq proper. That road is now closed, and members of the peshmerga believe the Iraqi army has mined it near the river and placed explosives on the new bridge. Kurdish soldiers watched an Iraqi bulldozer dig up the road on their side of the new Kalak bridge, and at 2 in the afternoon on Thursday, soldiers placed a large barrier across the roadway. The few refugees allowed to leave Saddam-controlled Iraq -- older men, women and children -- are now completely cut off from the Kurdish area, a zone of relative safety for people fleeing the war. The roads have fallen quiet.

Contrary to the Pentagon's expectations, the Iraqi conscripts have not thrown in the towel at the first sign of war. From Kalak's main street, it is easy to see the distinct shapes of the soldiers moving from one position to another on the ridgeline. For most of the afternoon, they moved quickly in groups of two and three, remaining on the open for long periods. The peshmerga did not fire on them.

Early Friday morning, Mosul, the major city to the west, was the target of American airstrikes, but to date, there have been no surrenders to peshmerga forces, only hints to various Kurdish commanders. Still, most militia members here believe that the Iraqis on the ridge that overlooks Kalak are a hairsbreadth from surrender, and only need the slightest push in that direction.

"Even if American planes fly very low and use a loudspeaker to tell them to surrender, they will do it," said Suleiman Hasso, a first lieutenant in Kalak's Kurdish police force. "They are very poor men, they don't want to fight, they don't want to leave home, they are afraid of everything. With fifty peshmerga, I could send them all the way back toward Mosul."

Mr. Hasso is a giant of a man and offered to take a journalist behind the ridge where the Iraqis were encamped. From a small town just west of the Iraqi position, it seemed that there were hundreds of soldiers on the ridge in makeshift shelters. Most regular army soldiers are conscripts who face prison or worse sanctions if they do not obey Baath party agents. Once in the army, armed political officers make sure that there are no desertions. These agents are part of an "execution committee" whose job is to shoot defectors and dissidents before they can make it to safety.

As a new round of airstrikes hit Mosul around 10 on Friday night, a chorus of shouts came from the Iraqi soldiers in the hills. The shouting is part of a call-and-response system Iraqi commanders use to check the readiness of their troops. A man who doesn't answer the call is punished. Kurdish men in Kalak shouted back, taunting them. The Associated Press contributed to this report.