They die, you buy

Candidate for the most repulsive spam of all time? An ad for a boobs and bombs T-shirt celebrating the destruction of Baghdad. 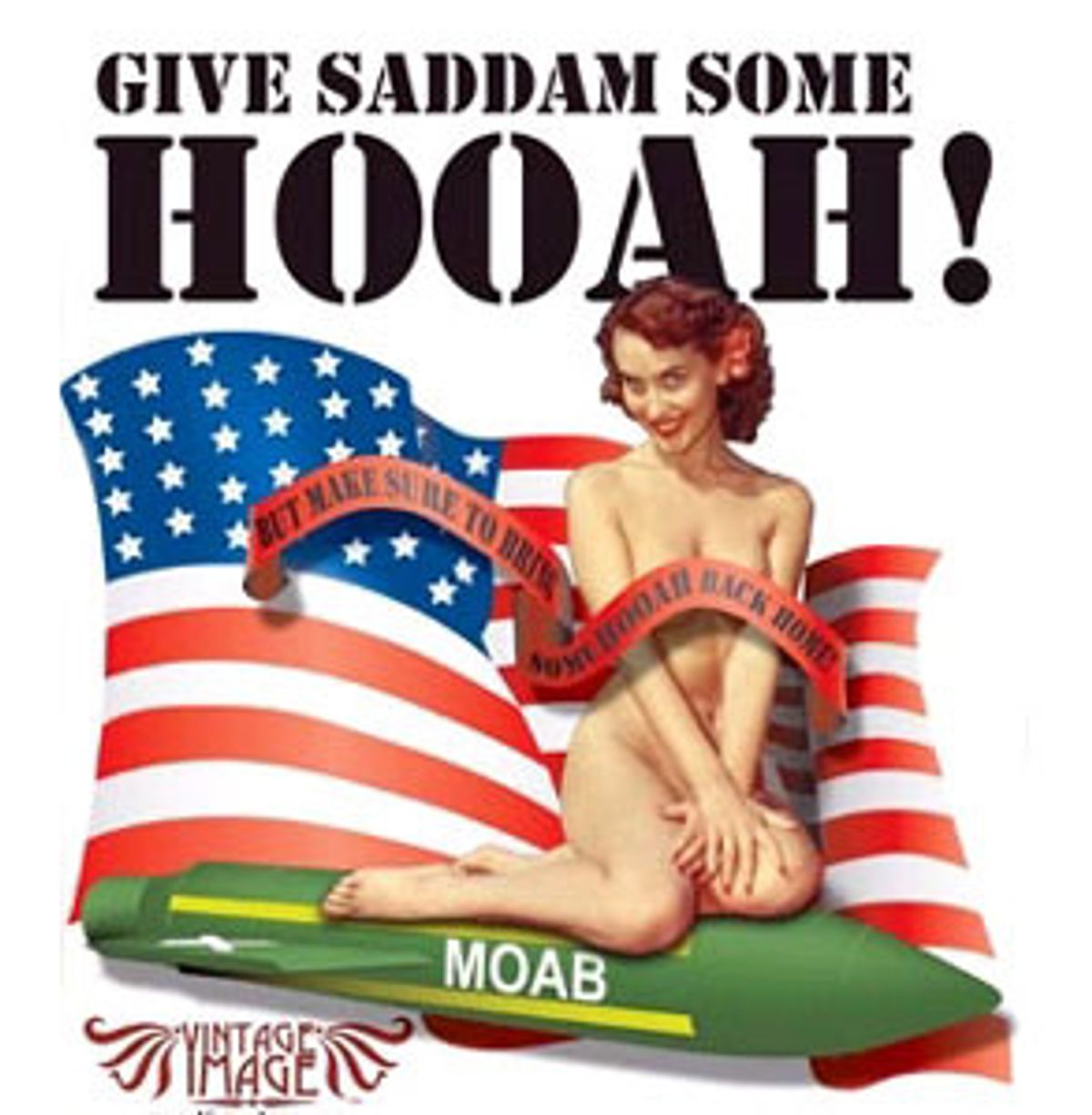 The spam started flowing within an hour or two of the commencement of the massive bombardment of Iraq, the so-called shock and awe campaign meant to demoralize and cow Saddam Hussein into immediate submission. Proving, once again, that the Internet is the most efficient means for the mass distribution of amoral capitalist behavior ever invented.

The first wave carried the timely subject header "Shock and Awe." The body of the spam was an advertisement for a T-shirt emblazoned with the hearty call to arms: "Give Saddam Some Hooah." On the shirt, against a backdrop of the American flag, is a picture of a naked woman sitting on top of a MOAB bomb, the "Massive Ordnance Air Burst" (aka "mother of all bombs") that is the latest lethal addition to the U.S. arsenal. The woman's breasts are covered with a ribbon that reads "But make sure to bring your hooah back home."

An hour later the spam arrives twice more, this time labeled "Hooah for our troops." The newer version has had the benefit of a little more attention to production values, and includes a definition: "HOOAH (hü-ä) interj. Slang used by soldiers, primarily light infantry, airborne troops and rangers referring to or meaning anything and everything except 'no.'"

In the midst of war and terror, it's tempting to pause and consider the ironies raised by this advertisement. The MOAB is a 21,000 pound weapon of mass destruction that the U.S. is threatening to drop on the Iraqis to get them to stop using their weapons of mass destruction. That's kind of neat. Then there's the position of the woman astride the bomb, which summons up memories of B-52 pilot Maj. "King" Kong straddling the nuclear missile in the movie "Dr. Strangelove" -- but surely it was not the intention of the T-shirt's creator to invoke that antiwar imagery. Finally, there's the whole idea of mass death in Iraq being used to hawk T-shirts. One would like to imagine that such barbarism was unprecedented, but no doubt 9/11 and the war against the Taliban inspired similar examples of bloodthirsty idiocy. Who, after all, of a certain age, can forget their Ayatollah Khomeini dartboards?

Of course it might all just be a joke cooked up by someone with Photoshop, time on their hands, a couple of free e-mail accounts and access to spam-bot technology. Maybe there aren't any real T-shirts to be purchased by e-mailing gousa@concepts365.com. If so, it's a stab at humor whose instant, worldwide impact would never have been possible in the pre-Internet age. At the very moment that Iraqis are dying horribly, blown to smithereens by Tomahawk cruise missiles and other state-of-the-art killing machines, the Net is enabling the real-time purchase of T-shirts (or the images of T-shirts) celebrating the slaughter.

It's the miracle of cyberspace. You can't get stuff like this on cable TV -- even on Fox News! Only on the Internet can someone send this "They die, you buy" message out to so many, so fast.

Did Vannevar Bush imagine this when, in his seminal 1945 essay, As We May Think," he cooked up the idea of the Memex machine, the set of associative hyperlinks that prefigured the Web? Did the geeks at DARPA who rigged up the Internet ever dream that their network would become a delivery mechanism for T-shirt advertisements selling blood and rubble? Could even the first Usenet geeks who were so enraged by the legendary Green Card spam of Canter and Siegel in the spring of 1994 possibly have conceived of the blight that unsolicited e-mail would one day become?

Invitations to support the bombing of a heavily populated city for the low, low price of $19.95 were by no means the only obnoxious spam that arrived in my e-mail today. There were also opportunities to view rape, bestiality, father-daughter incest and all the rest of the daily payload dropped on my in box. And much as that onslaught continues to irritate me, day in and day out, I suppose it's not really that bad. The worst the Internet can do hardly compares to a day in the life of a resident of Baghdad -- today.