"Baghdad is burning. What more can we say?" 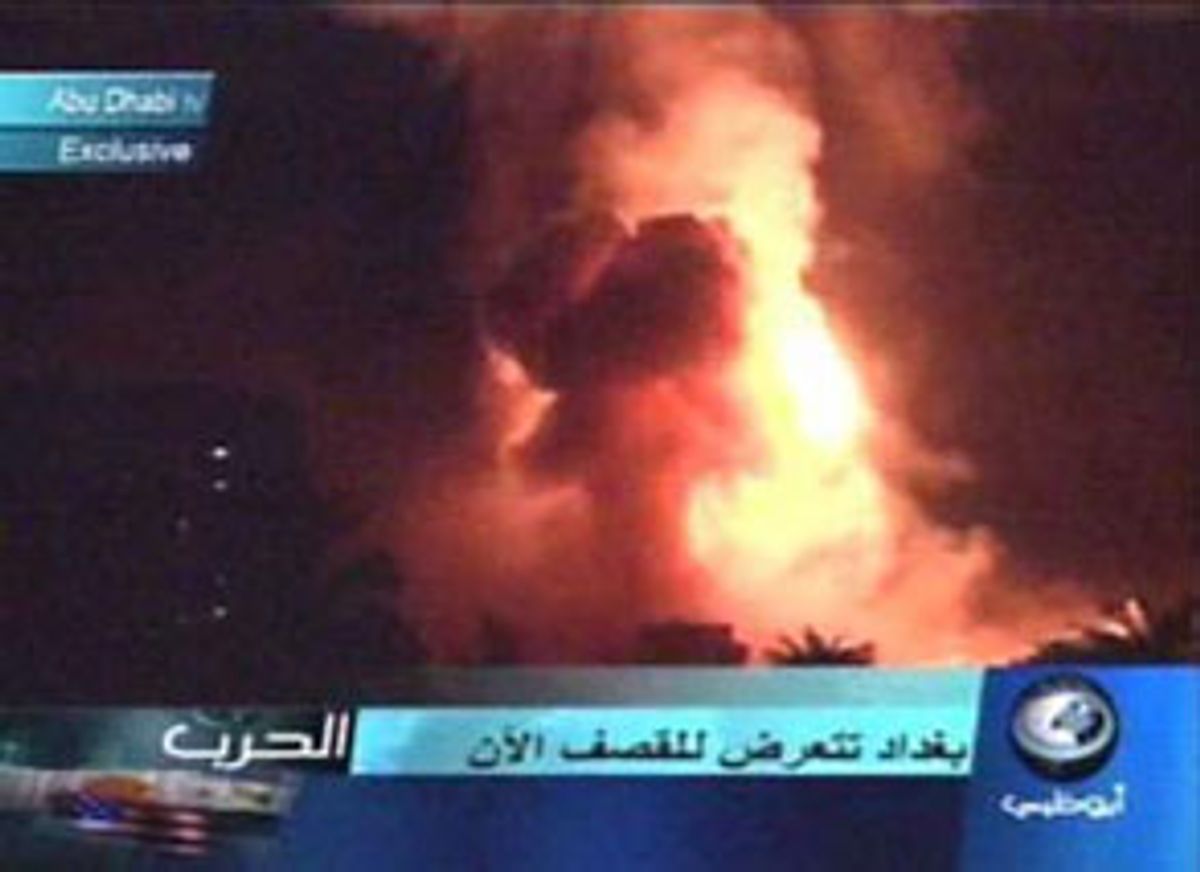 Huge blasts rocked Baghdad as a barrage of mighty explosives crashed down on the Iraqi capital on Friday, sending up huge clouds of smoke and flame.

The U.S.-led aerial attack was heralded by the sound of air raid sirens and explosions, followed quickly by major detonations in the city of 5 million.

Many buildings were ablaze in the heart of the city, with towering red, pink and brown clouds rising high into the night sky.

In response, the Iraqis opened up with anti-aircraft bursts which winked in the darkness.

The spectacular blasts lit up the night sky, illuminating the city even as they decimated it. Clouds of smoke extended high above Baghdad as fires burned; at one point, the sound of a missile roared through the street before exploding into a fireball.

Part of Saddam Hussein's "Old Palace" -- the official seat of government in heart of Baghdad -- was hit. The building next to the palace was on fire; in another part of the compound a building of about 10 stories was hit, with black smoke billowing from it.

White flashes could be seen in the areas west of the palace in Baghdad. The area includes many government buildings, including the main intelligence center and headquarters of the ruling Baath Party.

"Baghdad is burning," said a correspondent for the Al Jazeera television network. "What more can we say."

The lights in the city dimmed but came back on once the bombing started. Red tracer fire shot across the night sky as the U.S. plan to "shock and awe" Iraqi troops began.

The assault was launched even as American officials continued surrender talks with senior Iraqi officials.

More than a half-hour after the attack began, Iraqi radio and television were still broadcasting and the power stayed on.

Anti-aircraft fire was also reported by witnesses over the northern oil city of Kirkuk at about the same time as the attack on the capital was under way.

Earlier, aboard the USS Kitty Hawk, scores of bombs were readied to fire and stored in racks in the ship's cavernous hanger bay. Ordnance crews worked steadily through the day attaching global positioning system and laser guidance kits to 500-pound, 1,000-pound and 2,000-pound bombs and moving the ordnance from the ship's 22 weapons magazine to holding bays.

A semblance of normalcy had returned to Baghdad earlier Friday after U.S.-led bombings Thursday morning and then again at night. There was traffic on the streets, many shops were open and people were out during the daylight hours.

Many shops and cafes remained open, providing the city with a surface appearance of everyday life -- except for the armed Baath Party activists and jeeps mounted with heavy machine guns cruising the streets.

However, there was no sign of army troops in the capital, suggesting that the activists were there not to defend against the Americans and British but to suppress any uprisings and maintain iron control.

Iraq's information minister acknowledged Friday that one of Saddam's homes was hit in an earlier U.S. bombardment, but said no one was hurt.

"They rocketed the residence of his household," Mohammed Sa'eed al-Sahhaf said at a news conference. "But thank God, they are all safe."

Al-Sahhaf lashed out at the "criminal George Bush and his gang."

The Iraqi News Agency said 37 people were injured in Thursday night's raid at heart of Baghdad and in other locations in and around the city.

Standing next to Al-Sahhaf at the news conference was Interior Minister Mahmoud Diab al-Ahmed, carrying a Kalashnikov rifle and ammunition and wearing a military uniform and flak jacket with a knife in the pocket and a pistol on his hip.

"Some of you might may be wondering why do I have a Kalashnikov in my hand and wearing a flak jacket," he said. "Because we have all in Iraq pledged never to relinquish our weapons until the day of victory."

Sahhaf also denied any U.S.-led advance into Iraq and argued that TV images of Iraqis surrendering were fabricated.

"Those are not Iraqi soldiers at all," he said. "Where did they bring them from?"

Al-Sahhaf suggested that any captured U.S. and British soldiers may not be treated as prisoners of war under the Geneva Conventions. Al-Sahhaf said Iraq was considering how to treat them.

"Those are mercenaries. Most probably they will be treated as mercenaries, hirelings and as war criminals. ... For sure, international law does not apply to those," he said.

A busload of journalists was taken to the main Al-Douri power plant, which was damaged in the 1991 Gulf War, where at least 12 human shields from Switzerland, Turkey, France and the United States are staying.