"View From the Top" 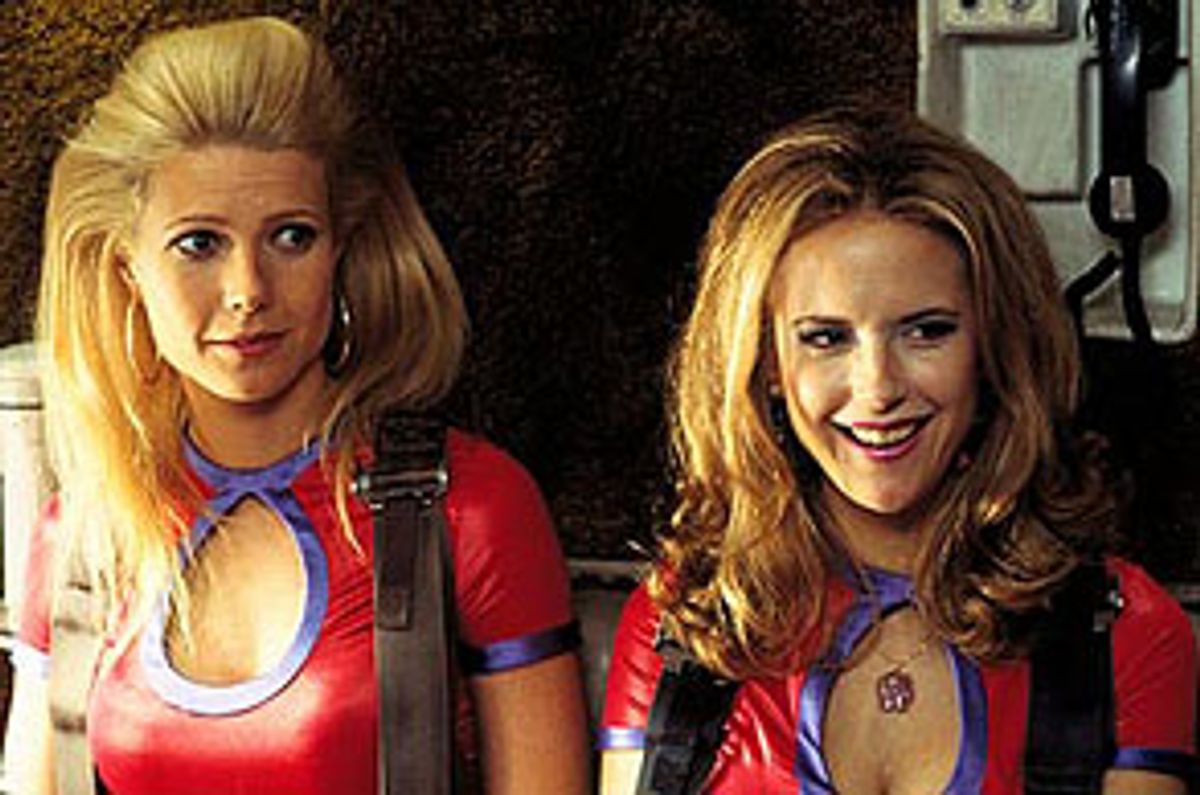 The art of making a good-natured, conventional comedy has been all but lost. Few contemporary filmmakers have any sense of pacing when they're directing comedy; they hurl jokes at us like hardballs, as if it were possible to bully us into laughing.

That's why it's crucial that Bruno Barreto's "View From the Top" doesn't get lost in the mix. There's a good chance that it will make you laugh, but even if it doesn't, you have to give Barreto credit for respecting his audience. The movie's jokes have a light, springy touch; if one doesn't tickle you, it sails by quickly to make room for the next one. We never feel assaulted or corraled by the movie's humor. Barreto is probably best known for the drama "Four Days in September," but his flair for comedy is a marvelous surprise: He suspends the audience in that perfect state between relaxation and anticipation. Even if we don't laugh, we're left to feel the choice is completely our own.

You can tell a director knows what he's doing when every actor in an ensemble rises perfectly to the occasion, and when even the smallest jokes in a screenplay (this one is by Eric Wald) have a mischievous gleam. Gwyneth Paltrow plays Donna, a small-town Nevada girl who believes she's destined only to rise through the ranks at the local Big Lots, even though she dreams of bigger things. Then she sees flight attendant pioneer Sally Weston (Candice Bergen) on television. Weston is the Mary Kay of air hostesses, the quintessential woman who reached for her dreams and grabbed. She's written a book called "My Life in the Sky," and Donna picks it up and devours it. We see her perched behind it, reading eagerly, the bright blue of the book's dust jacket echoing the color of her eyeshadow.

So Donna, with her sunny disposition, meticulous manners and unshakable scruples, starts at the bottom of the ladder, with a crummy two-bit local airline -- as the cigar-muncher who hires her notes, "We got five planes. We fly gamblers and drunks." Undaunted, Kelly sets her sights on working for Royalty, the crème de la crème of airlines, the airline on which Sally Weston made her name. And it's a class act, all right: The Royalty uniforms, unlike the easy-care polyester eyesores we're used to seeing in real life, are trim zippered suits done up in fine fabric, topped with a neat pillbox hat.

"View From the Top" is an escapist fantasy, a fable about the way so many of us struggle not to be trapped by the class into which we were born. We can read Donna's class status by the shorthand of her costumes: In her old life, she wears a succession of stretchy, Day-Glo leopard prints (sometimes with matching sunglasses) and flashy rhinestone barrettes. But at one point we see her poring over a fashion magazine, gazing at a spread that shows two similar but, as any lover of fashion will tell you, hardly identical outfits: One page shows a beautiful yellow coat ensemble labeled "High Style"; the other shows a similar outfit in an inferior cut and fabric, designated "Cheap and Basic." The camera doesn't linger on the pictures to make its point, because all we need to get the idea is a fleeting glance at them. They're a stand-in for all the things Donna wants out of life -- in other words, to not always have to settle for the cheap and basic.

The movie never makes fun of its lower-class characters: At worst, they're light caricatures, hinting at the way people look and dress when they're hoping to become somebody else. And while you may not want to buy Gwyneth Paltrow as a trailer-park cutie, there's no getting around the fact that she seems believable and sweet in those spandex outfits and upswept ponytail dos. The idea, and Paltrow conveys it wonderfully, is that real patrician beauty has more to do with cheekbones than with money, and class background has nothing to do with having actual class.

And that's why you cheer for Donna as she makes her way, conscientiously, up that career ladder, undaunted by the wicked ministrations of her former best friend and arch-rival, Christine (Christina Applegate) -- we just know she's bad news when she steals a bunch of candy-colored jet-shaped guest soaps from the bathroom of Sally Weston's bathroom. And you want her romance with Ted (Mark Ruffalo, in a performance so charmingly relaxed he could be wearing PJs the whole time and we'd hardly notice) to blossom. He's perfect for her, even if all the members of his ultranice Cleveland family wear matching red sweaters at Christmastime. It's a kind of normalcy that Donna both fears and longs for.

There's something very old-fashioned and sweet about the way "View From the Top" uses Paris to represent the pinnacle of all Donna's dreams. Barreto adds some nice fillips to the story. When she finally gets to Paris, we get a glimpse of her in that "High Style" yellow coat, with a black beret plunked slightly askew, like a pancake, on the side of her head, an early 21st century version of a '50s Avedon photograph. Later, Barreto uses a series of slow, circular pans to show us the small-but-tidy Manhattan studio apartment Donna finally settles into. The first spin shows us how delighted she is to be there (she has a view of the Chrysler Building from her window!), but each successive one shows how exhausting her "ideal" life of constant travel to glamorous places actually is, as we see her stepping through that door and dropping her wheeled suitcase with an exhausted thud. Barreto even saves the ending from the deadly coziness that it veers toward. (Personally, I'm not a fan of "See? Life in the big city isn't all it's cracked up to be" endings, but this is one I can live with.)

Little gags are tucked into every corner of "View From the Top." Mike Myers shows up as Royalty training guru John Whitney, a pompously jocular middle-management type who secretly harbors bitterness that his one glass eye has kept him from becoming a top flight attendant himself. (Myers, never one to pass up a joke about an infirmity, turns that eye into a gold mine. Just when you think you're not going to laugh at him anymore, he comes up with some other bit of ridiculousness to get you going again.) Whitney is one of those lower-rung honchos who's so hung up on procedure -- his slogan is "That's procedure!" -- that his very rigidness becomes a joke in itself. And when he tells his class of attendants-in-training to get out of their seats, look under their desks and remove the dollar bills that have been taped there, you're ready for the line that follows: "You have to get off your ass to make a buck!" If you've ever had to sit through one of these "learning is fun!" training classes -- the sort that make you wish you were anywhere else on the planet -- the joke won't be lost on you.

Every actor has plenty of moments to shine. I laughed when Christine, contemplating the possibility of getting a New York-to-Paris route, says with blasé matter-of-factness, "I hear all those Europe guys are uncircumcised." And Candice Bergen, dressed in crisp pastel suits that look as if she never, ever sits down in them, makes the best of some terrific lines and sight gags. When Donna goes to Sally for advice, she assures her she can help. "I am Sally Weston!" she intones. "I invented this," whereupon she stands up and, with chipper efficiency, reenacts that stiff, two-fingered pointing gesture that flight attendants all over the world use to indicate the emergency exits.

But "View From the Top" belongs mostly to Paltrow. Audiences seem to be divided on her: Many people succumbed to her shy, breezy charm immediately after "Shakespeare in Love." Others remain hung up on her golden-girl beauty or, more understandably, her flat and somewhat nasal voice. But Paltrow is simply a glowing presence, and she has a great but gentle flair for comedy. She is also, whether dressed in psychotically colored animal prints or thousand-dollar coats, fabulous to look at. She plays Donna like a reassurance that you can dress on a dime as long as you have confidence, cheekbones and slender hips. And in a pinch, you can do without everything but the confidence.