Why are these people smiling?

With war underway, and a Bush victory a possibility, the antiwar movement appears to be in denial about its future influence. 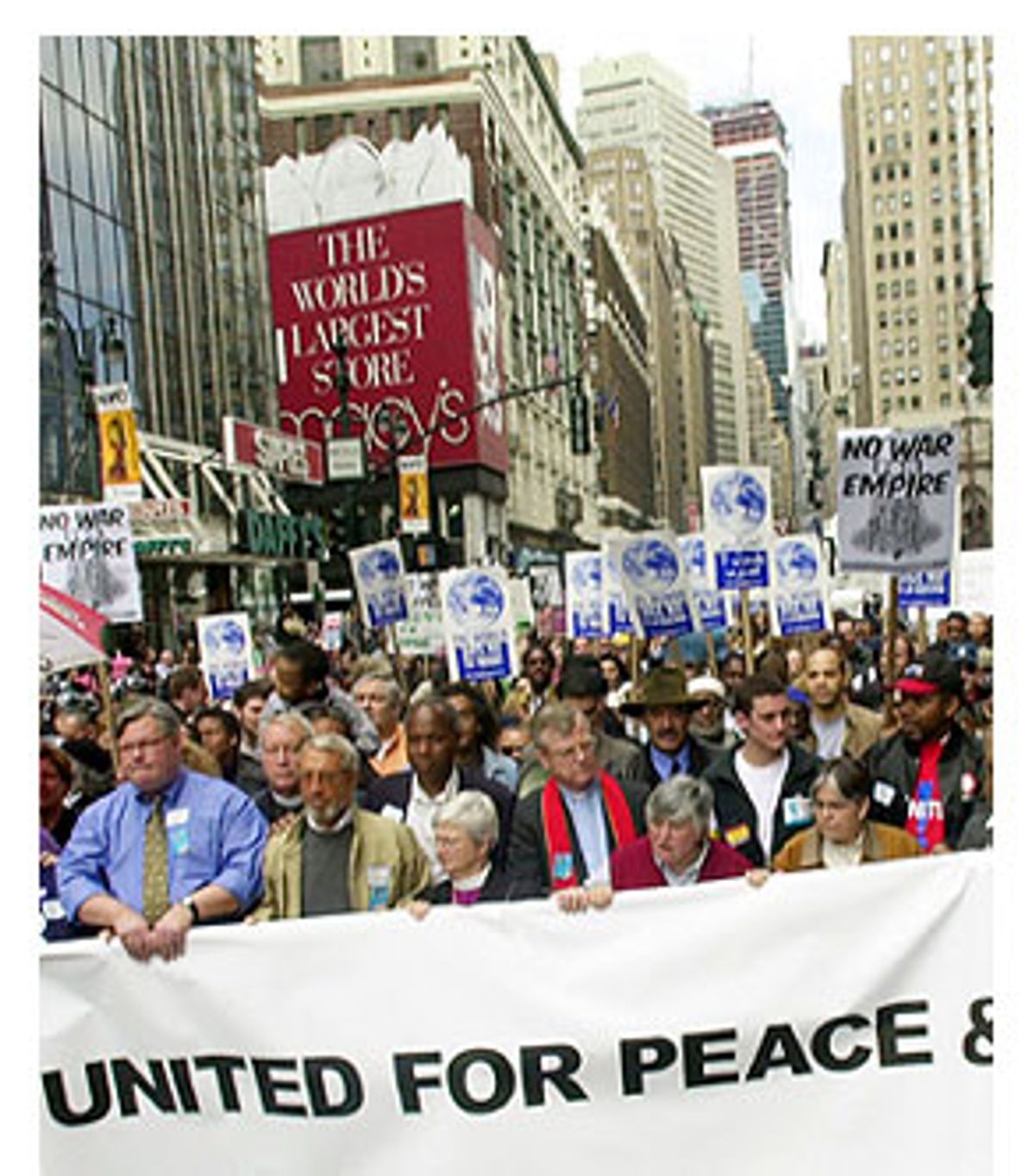 Saturday's peace protest in Manhattan was so jubilant, you'd never know there was a war going on. On one of the most gorgeous days of the year, an estimated 100,000 to 200,000 people flooded Broadway, marching from Times Square to Greenwich Village in one of the largest antiwar protests in America since the war's start. The demonstration was one of many across the globe -- hundreds of thousands took to the streets in London, 90,000 in Paris, 10,000 in Naples and 15,000 in Calcutta. But while recent protests abroad have been marked by militancy -- with people throwing stones, fake blood and, in Athens, Molotov cocktails at American embassies -- the march in New York was overwhelmingly peaceful and strangely cheery. For all the rhetoric of atrocity, it felt like a street party.

"I always feel so energized after I go to these," said a 30-year-old artist who goes by the name Machine. Lithe and statuesque, Machine was wearing sequined hot pants, fishnet stockings, shiny platform heels and a huge feathered headdress. His sign said, "Baby, I am the bomb." Around him were drag queen nuns and two people wearing stars-and-stripes-patterned suits and dancing on stilts. A dozen women in red, white and blue bobbed wigs with matching skin-tight outfits and huge missile-shaped strap-on dildoes fanned out to the street, flouncing and dancing as they sang "Show me the way to the next little war," to the tune of Kurt Weill's "Alabama Song."

There's often a contradiction at protests between a crowd's elation and its somber message, but it seemed particularly stark on Saturday. Despite the efforts of the world's broadest antiwar movement, war had begun. Bombs rained on Baghdad, and everyone in attendance seemed convinced that many Iraqi civilians would be slaughtered.

So why were so many dancing in the streets?

"I guess it's just the good energy here," said 24-year-old Temima Fruchter. "Plus it's really nice out. And there's instruments. And Muppets." (A few people were carrying Muppet dolls. Their symbolic relationship to geopolitics was unclear.)

"There's a certain joy inherent in freedom of speech," said Rene Stephens, a 22-year-old who works at Citizens Campaign for the Environment. "I don't think it dilutes our message."

That depends on what the message is. One that resonated throughout the crowd was a refusal to be cowed by those who claim that dissent during wartime is treasonous -- and it's easy to see how that kind of defiance is giddy-making. There also was the usual rage about the direction that George Bush has taken the country, a rage that, in some ways, exists independent of the war in Iraq or its outcome.

If that overweening fury toward Bush can be harnessed after the war ends, the protesters believe, it could be a powerful force for checking the president's far-right domestic agenda and unilateral foreign policy. "It's not going to be easy, but we can still try to contain the Bush administration," said Tanaquil Taubes, a Manhattan psychiatrist whose sign said, "Honor Our Soldiers but Impeach Bush." "A lot of people here are afraid of what America is becoming."

Yet with the war underway, whatever anti-Bush momentum has been gained on the ground will likely dissipate if Iraqis welcome American troops as liberators. And in these very initial stages, that's exactly what's happened. The Guardian, a liberal British paper, quoted a sobbing man in Safwan, "You're late. What took you so long? God help you become victorious. I want to say hello to Bush, to shake his hand. We came out of the grave."

United Press International quoted an American pastor who went to Iraq as a human shield and left as a hawk. Iraqis, he said, "told me they would commit suicide if American bombing didn't start. They were willing to see their homes demolished to gain their freedom from Saddam's bloody tyranny. They convinced me that Saddam was a monster the likes of which the world had not seen since Stalin and Hitler ... Their tales of slow torture and killing made me ill."

Of course, the war has just begun, and the potential for greater horror is still high. The shocking and awing of Baghdad looks harrowing on TV; Turkey's incursion into the North has frightening implications for the Kurds; and American forces have yet to encounter Saddam loyalists thought to be dug in in Baghdad.

But if at the end of the war Iraqis believe that the chaos and suffering of the war was worth it, progressives will have to figure out a way to maintain a protest movement that can both celebrate the liberation of Iraq and fight Bush's domestic and diplomatic policies.

Many antiwar protesters, though, seemed unprepared to contemplate that the war could have any positive effects on the Iraqi people all. All acknowledged that Saddam is a monster, but few imagined that Iraqis might hate him even more than war and occupation, and that the imperfect salvation of a savagely repressed people might be a positive side effect of even the most unjust and cynical war.

"I don't think that will happen," said Ching-Lin Weng, a 32-year-old interior designer, when asked how she would feel if Iraqis cheered American forces. "The media can lie and nobody will know the truth. They prefer to have their own government rather than a government from another country, even though their government is bad."

In an article in AlterNet last week, Mark Levine chided the left for failing to prepare itself for a Bush victory in Iraq. With the best-case scenario of stopping the war increasingly unlikely, he wrote (apparently without irony), "the movement is being forced to fall back on a second scenario, 'Everyone Loses,' in which the warnings of a protracted and bloody war that destabilizes the Middle East and increases terrorism bear their bitter fruit. However unpalatable in terms of destroyed lives and infrastructure, this latter scenario would at least quash the Administration's imperial dreams and force the kind of soul searching of United States' policies that is a major goal of the movement."

But the left might not get such a contradiction-heightening catastrophe. It might be proven wrong. "[T]he antiwar movement would be well advised to plan for a third scenario: 'Bush Wins,'" Levine wrote. "In such a scenario, especially if there is no major upsurge in domestic terrorism, the antiwar movement will find itself publicly discredited and politically marginalized; remember the Y2K dooms-dayers? ... If the movement doesn't move with full effort to lay the groundwork for a Bush Wins scenario the massive organizing and consciousness raising of the last year could well prove fleeting, forcing the movement to start from scratch in mobilizing public opinion a year or two down the road when the chickens of an over-extended empire come home to roost."

In the streets, though, not many were having the discussions Levine wants to spark. Instead, there was a hint of denial Saturday in the way some demonstrators explained away the footage of cheering Iraqis in Safwan.

"You saw 'Wag the Dog,'" said Richard Frumess, in response to a question about Safwan. A 55-year-old business owner from Kingston, N.Y., he conceded that camera people "may have found a few celebrating, but they showed images of Afghans celebrating, and look what's happening there."

One woman made a sign specifically to defy reports of an Iraqi welcome for the United States. Erika Bernabei, a 22-year-old from Brooklyn, taped a newspaper headline to her red and black-striped poster saying, "Troops to Surrender and Avoid All Out Attack." Beneath it, the poster said, "Fear != Consent. In solidarity with the people of Iraq."

Bernabei, a nonprofit worker with spiky, cinnamon-colored hair, was chanting, "We're queer! We're cute! We're antiwar to boot!" She explained that she was unconvinced by reports about Safwan. "What I believe is that they're being complacent because they're so fucking afraid. I have no doubt they'll smile at soldiers with huge guns. I really truly doubt the people of Iraq are cheering bloodshed."

Jef Leroy, a Belgium-born 28-year-old Ph.D. student at Cornell, also dismissed the reports. "How objective is that footage? I have a hard time trusting footage that comes out of a war zone, especially if it's from the American media."

Mary Callaghan, an attorney wearing a "Patriots for Peace" sign around her neck, asked, "What if Osama bin Laden had the power George Bush has and he conquered New York City? Do you not think there are people in New York City who would greet him with open arms?"

One marcher who has contemplated a Bush victory, at least in the short-term, was Taubes. "I don't mind going down as, 'You fool, he was a Hitler and the U.S. came in and liberated the country.'" Why? Because she's convinced that if nothing else, the massive global peace movement has changed the way the war is being waged. The protests, she says, have increased pressure on the administration to avoid human casualties and not to exploit Iraq's resources after the war.

"He's trying to prove the peace movement wrong, and I'm all for that," she says. "Maybe this war will be shorter and more humane because of these demonstrations."