Is the CIA spamming Iraqi generals?

It's the latest in high-tech psychological warfare: E-mail and voice-mail invitations to surrender. But so far there are few signs that the strategy is working. 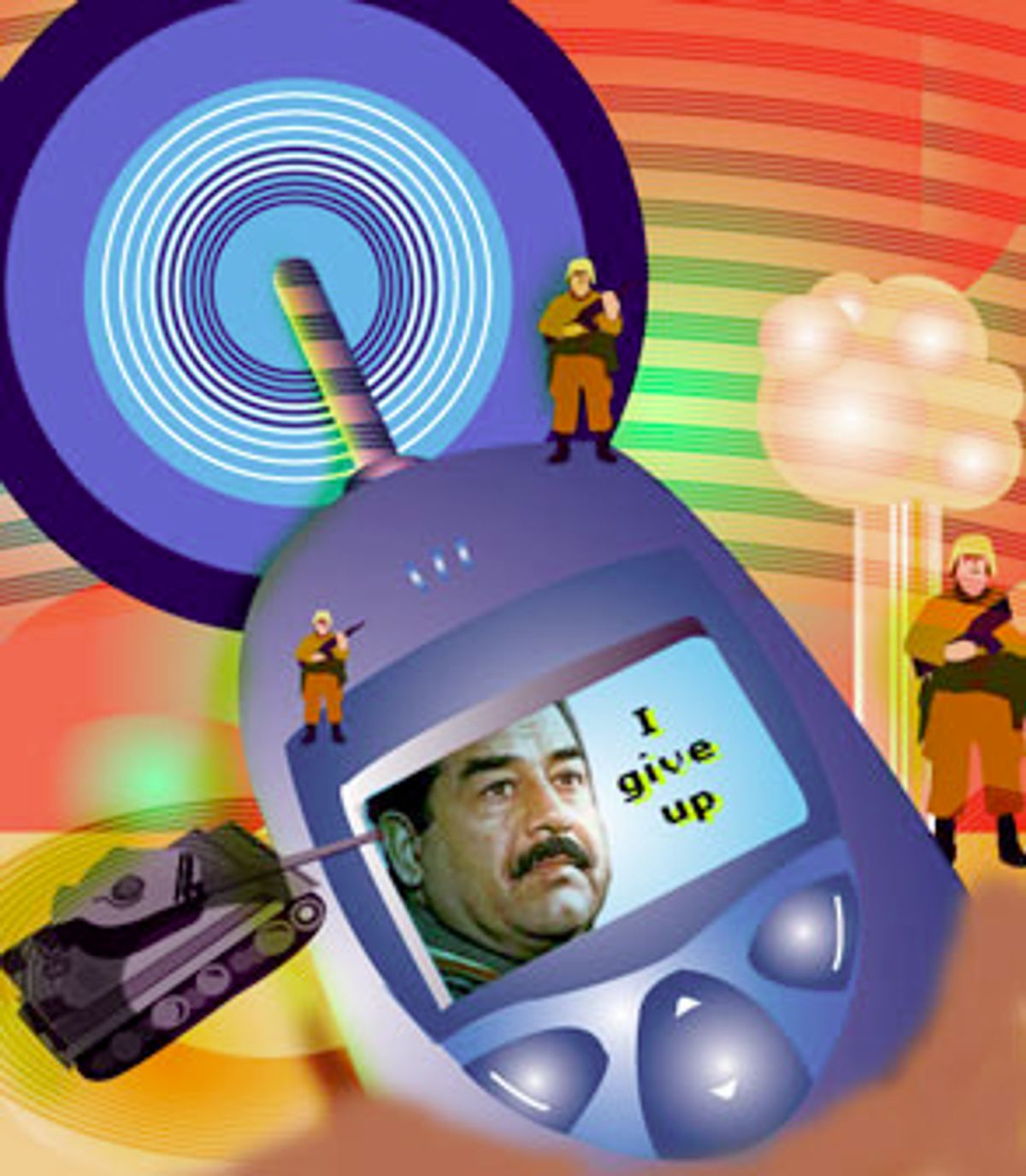 On Friday night in Baghdad, at the exact moment American bombs were falling on Saddam Hussein's key power centers around the city, Gen. Sultan Hashim Ahmad, the Iraqi defense minister, was conducting a press briefing. As he spoke, explosions rocked the city. Yet remarkably, the building he was in, the Iraqi Defense Ministry -- a huge complex on the eastern bank of the Tigris River that one would guess might be near the top of the list of important places to bomb -- was left standing.

Why hasn't the United States hit the Iraqi Defense Ministry? On NBC's "Meet the Press" Sunday, Tim Russert asked Secretary of Defense Donald Rumsfeld that question. Rumsfeld was coy: "Obviously we didn't hit it," the secretary said, without offering much explanation. But as media commentators speculated over the weekend, one reason may be that U.S. officials are conducting informal talks with members of the Iraqi defense establishment in an effort to persuade them to lay down their arms and embrace the invading Western military.

U.S. Defense Department officials have acknowledged this strategy. "Is there country-to-country dialogue taking place?" Rumsfeld said on Friday afternoon during a press briefing. "The answer is no ... Is there contact between coalition forces and Iraqi forces? The answer is, most certainly. There has been over the past period of weeks, and those discussions have intensified."

According to several press reports, U.S. military and intelligence personnel have managed to establish remarkably close contact with Iraq's top military leaders. The Americans don't just know these generals' home and office telephone numbers; the CIA, it's been reported, has a robust Rolodex of e-mail addresses, cellphone numbers and other high-tech means to contact both the warriors and their family members.

Jack Kelley, a reporter for USA Today, wrote on Monday of Iraqi Maj. Gen. Abdul Qassab, who is apparently the object of intense wooing from the U.S. Every day for the past few months, the general has received an anonymous phone call telling him to "give yourself up. You cannot win. You will be saved if you defect."

Reuters has also reported the text of e-mails being sent to Iraqis asking them not to use weapons of mass destruction. One read as follows: "If you provide information on weapons of mass destruction or you take steps to hamper their use we will do what is necessary to protect you and protect your families. Failing to do that will lead to grave personal consequences."

The CIA's efforts to call Iraqi generals with a friendly reminder that they'll be annihilated if they don't give in fits into the United States' larger strategy in this war -- one relying on what officials have called "capitulation," the mass surrender of much of the Iraqi military, as much as it does on the military damage wrought by precision bombing and the invading ground forces.

Indeed, "Shock and Awe," the name for the blitzlike massive bombing campaign the U.S. has been conducting over Baghdad, is specifically intended to break the will of the enemy. "Since before Sun Tzu and the earliest chroniclers of war recorded their observations, strategists and generals have been tantalized and confounded by the elusive goal of destroying the adversary's will to resist before, during, and after battle," the military strategists Harlan Ullman and James Wade write in "Shock and Awe," the 1996 book that introduced the term that has become the most annoying buzzword of this war. "Psychological and intangible, as well as physical and concrete effects beyond the destruction of enemy forces and supporting military infrastructure, will have to be achieved. It is in this broader and deeper strategic application that Rapid Dominance perhaps most fundamentally differentiates itself from current doctrine and offers revolutionary application."

Although this war represents the biggest -- and most high-tech -- test yet of an effort to convince the enemy that it's better to surrender than to fight, the U.S. military has tried, in previous conflicts, to connect with individuals from the enemy's side and get them to hang it up. "The first attempts to do this were during the 1999 Kosovo air campaign," says Charles Borchini, a fellow at the Center for Emerging Threats and Opportunities and a former psychological operations -- or psyops -- officer in the Army. "There were attempts to contact key officials in Serbia to get them to stop fighting, much the same way we're doing here."

The CIA used a slight variation on this technique in Afghanistan in 2001, too. At the same time that the U.S. Air Force was attacking Taliban warriors with laser-guided bombs, American intelligence agents were deployed throughout the country armed with briefcases stuffed with hundred-dollar bills, conducting face-to-face meetings with warlords to convince them that it was in their best interest to switch sides.

How does the U.S., in the heat of battle, manage to contact Serbians or Afghans or Iraqis who are presumably trying to hide from Americans? There's no easy answer to that question, experts say. Suffice it to say, the CIA has resources that go beyond the Yellow Pages -- if you're a foreigner, the CIA can spy on you, and it's not too hard to find out your phone number and e-mail address. Robert David Steele, a former spy and the founder of OSS.net, an intelligence company, said in an e-mail that his firm "can reach anyone in the world, including an Iraqi, within 3-5 telephone calls or 1-3 e-mails. We believe the U.S. Army is at least as capable -- they are as intelligent an organization as we know of with respect to 'information operations.' What they do in 'IO' is at least as important -- perhaps more important -- than what they do with tanks and artillery."

But experts say that just getting somebody's phone number is the easy part. The hard part is contacting the enemy leader without having the contacts detected by others on his side. In Iraq, electronic communications are censored and monitored; a general getting an e-mail from the U.S. Department of Defense could reasonably expect to be executed in short order. That's why the U.S. is probably exercising a certain amount of discretion in its efforts to contact Iraqis. The CIA could be sending veiled messages, for instance, or its notes might be passed through the leaders' friends or family members. Abdul Qassab, the Iraqi officer named in the USA Today story, has received messages through people in London and Jordan and in a hand-delivered message dropped off at his home.

Do such techniques work? Borchini says that he saw a result in Kosovo, but a delayed result. He's not sure that U.S. broadcasts to the population worked to quickly end that conflict, but he thinks that the U.S. efforts might have paid off more than a year later, when Slobodan Milosevic was ousted from office after a popular uprising against his rule.

Certainly the CIA's campaign in Afghanistan worked to get warlords to switch sides, but the timing of their defections is important to remember, experts say. Many warlords switched sides only after the U.S. had won a few major battles and it became clear which side would emerge victorious. Experts suggest that the same will hold true for Iraq, but that the military there is not convinced, after less than a week of war, that Saddam's end is nigh.

The talks that the United States is conducting with members of the Iraqi military can be successful only "in the context of somebody who is desperate to avoid getting killed, and from everything I'm seeing right now these guys aren't certain of defeat," says Kenneth Allard, a military analyst at the Center for Strategic and International Studies. "That point has not yet come on this battlefield."

How should the U.S. convince the enemy that they have no chance to win? "The best way to do it is to systematically demolish from the face of the earth the Medina division of the Republican Guard," Allard says. That division, positioned on the outskirts of Baghdad, is part of the Iraqi military considered most loyal to Saddam Hussein, and Allard says that the only thing that will persuade the other members of the guard to change their minds about Saddam is if the U.S. hands a frighteningly punishing blow to this group of soldiers. "It is an enemy that you have to bludgeon into the earth."

He added: "It ain't rocket science. It's street fighting."