In Crawford, Texas, near the president's home on the range, discouraging words about the war can't be heard. 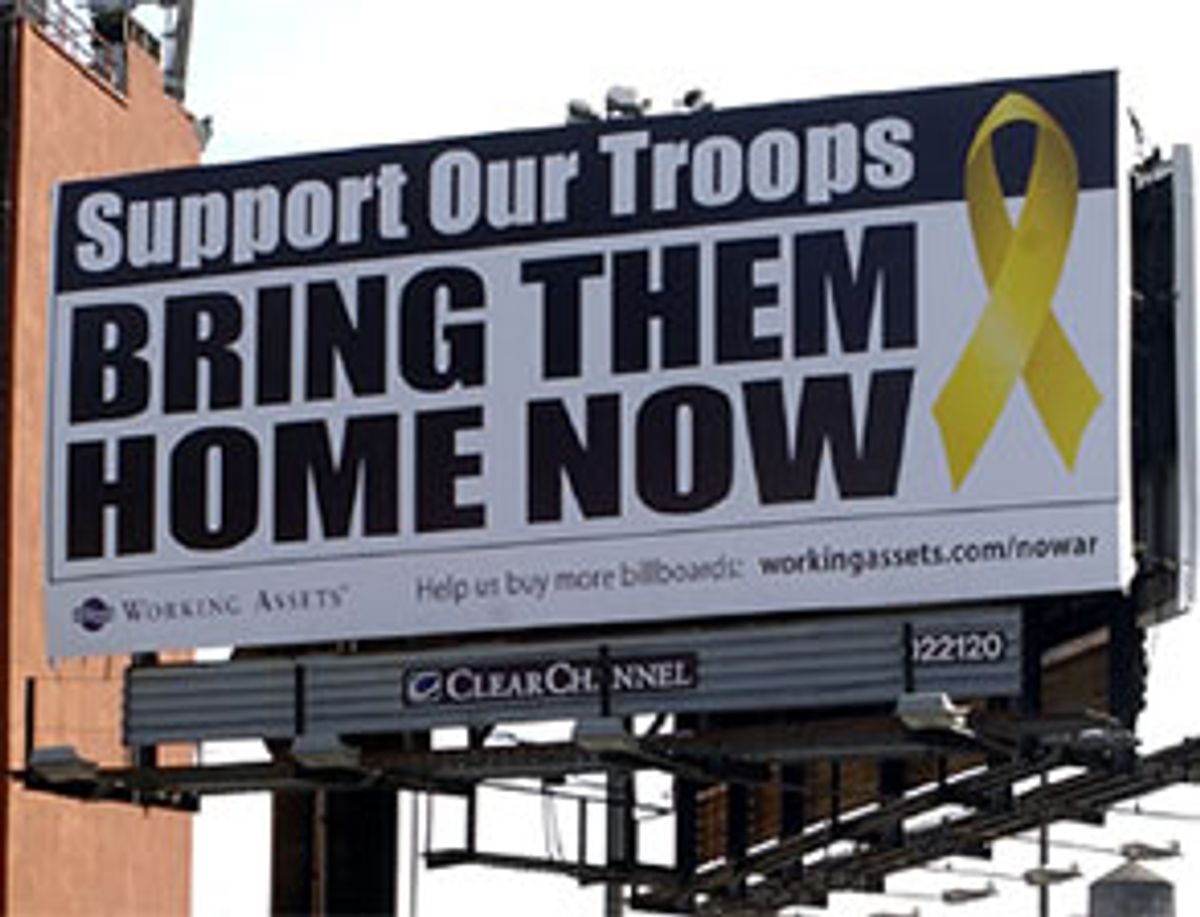 Is this antiwar message too hot for Crawford, Texas?

That's what four billboard companies have decided, by refusing to run an advertisement containing the message on billboards in the Texas town near President Bush's ranch.

Working Assets, a socially progressive telecommunications company that has contributed more than $200,000 to antiwar efforts, has placed advertisements with the message on billboards in New York, Los Angeles and the San Francisco Bay Area. In the ads, the pro-peace slogan is flanked by a yellow ribbon and a solicitation for donations to pay for more ads. So far, the company has raised more than $60,000 in donations from its own customers and supportive viewers of the billboard. Another one will go up in Detroit this Friday.

Two of them, Lamar Outdoor Advertising and Star Outdoor, both in Waco, Texas, went so far as to receive the vinyl for the 14-by-48-foot ad, and then decided not to run it.

"The last time I checked this was a free country," says Lou Manso, a media buyer from MetroMark International in San Diego, Calif., who is placing the ads for Working Assets. "It's so ironic that the president is sending our troops to defend the same rights that my clients are being denied."

Manso does concede that the billboard owners have the right to reject it, but he doesn't understand why. "This is such a harmless ad I couldn't imagine anyone turning it down on any terms, but it's their inventory, so they're exercising their right to refuse it."

Other peace activists have already confronted media censorship of their antiwar messages. MetroMark bought ads for MoveOn.org, an online advocacy group with more than 2 million members, that argued "Iraq Al-Qaida: There's Simply No Link." The ad ran in more than 110 newspapers around the country on March 5, but the Delta Democrat Times in Greenville, Miss., and the Sun Herald in Biloxi, Miss., refused to print them.

MoveOn.org also ran into trouble with its own antiwar billboards. Viacom refused to place ads in Washington and Detroit that said "Inspections Work. War Won't," according to Joan Blades, a co-founder of the organization.

"I thought it was kind of shocking that they were saying no to it," she says. But after bad publicity generated by Newsweek coverage, Viacom agreed to run them, says Blades.

So, why can't Working Assets' "Support Our Troops" ads get seen in Crawford? The billboard companies aren't saying. But Michael Kieschnick, president of Working Assets, is convinced that the censorship has less to do with peace, war and politics than property.

"The state motto is 'Don't mess with Texas.' The billboard owners probably were afraid that someone would come by and burn them down or pepper them with a shotgun, and they didn't want to risk property damage," says Kieschnick, who's from Texas, grew up there, and says he has thousands of relatives back in the Lone Star State. "Billboard owners themselves probably don't have a lot of politics."

Manso, the media buyer, says that the billboards owners have been "vague" about why they've rejected the ads, but several mentioned that they were concerned about the reaction from "the community." But he's still hopeful about getting the Working Assets message heard in the president's home state.

Clear Channel, which owns the billboards on which the ads were placed in San Francisco and New York, says it will start running the ads in Houston next Tuesday.