The Food Network spices up its stew with a new "reality lineup," including a "Bachelorette"-style cooking competition. But it's still a foodie's best friend. 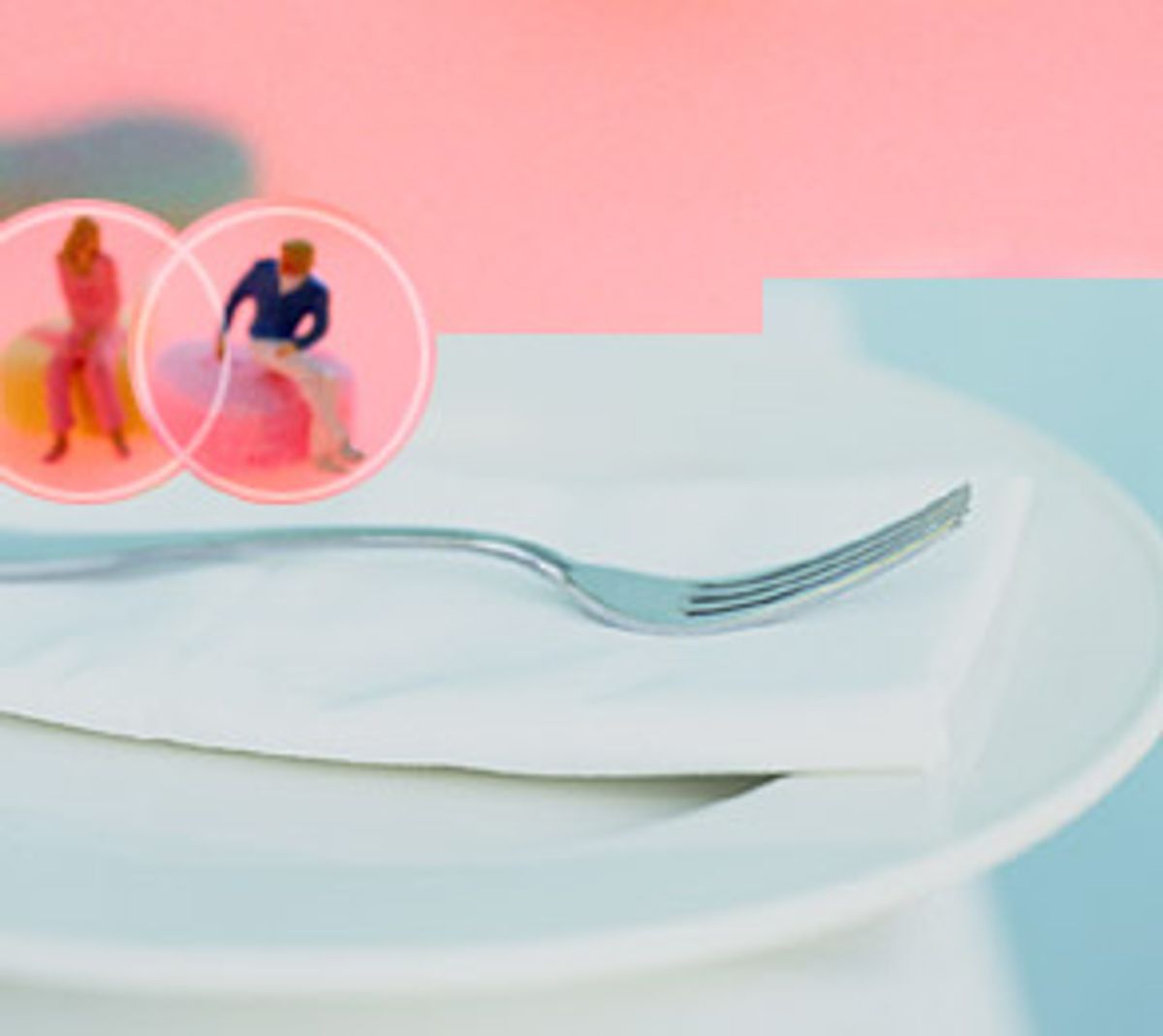 Last week a fantasy of mine almost came true. In the vegetable market near work, a cute boy (casual but not grungy, Semitic but not too hairy) roamed the squash-lined aisles with the kind of confusion you want to heavy-pet into stillness. He had bought a hunk of yellowfin tuna next door and was asking the stock boys which vegetable would complement it best. Armed with a bag of asparagus, he hovered over a wicker basket overflowing with French beans.

I inserted myself into the conversation -- trying to be charming but not obnoxious -- and suggested the slim beans but added he had done well choosing asparagus because I love asparagus, only it's out of season so he should be careful. "It's important to have color," I smiled. Later I saw him loitering by the grape tomatoes, asking another worker if he should buy the yellow pear-shaped guys or the red ones. I was jealous; he was supposed to ask me that. Then he'd say, "Hey, you look like you enjoy food. Why don't you come over and make this with me?"

Years later we'd tell this story to our kids and grandkids over and over again, how we met among tarragon leaves and fingerlings and wasn't it romantic. How we went home together and, after making a spectacular shrimp risotto, kicked back and watched the Food Network, a station whose programming is guided by same principles upon which our love was founded -- that food is nice and comfortable and connects well-meaning people to each other.

Back in the real world, my fantasy fell short at the checkout counter where the boy ignored me, talking on his cellphone instead. I had no choice but to go home and watch "The Naked Chef" all alone -- and fully clothed. For me, the Food Network has always been the perfect escape. Not only from my dating woes, but also from television in general. Every time I tune in, I see nice people doing nice things with nice food. It's warm and fuzzy and not at all threatening -- like PAX, only without the Jesus nonsense.

Playing nice seems to go against the grain of winning programming these days, but Food Network is doing extremely well. "Fear Factor's" snake-brains-for-dinner may pull in big-time ratings, but Food Network is equally successful without the gimmicks or gross-out factor. One of cable's fastest-growing networks, Food Network broadcast in 77 million homes in 2001 -- that's 9 million more than the previous year.

I'm interested in all the dicing, zesting, spluttering, steaming and eventual consumption that cooking entails -- but I was like this before I had cable. What's noteworthy is how Food Network hooks people who aren't foodies or cooks, people who think a McRib is gourmet eatin', who have no interest in where their food comes from or how to make it.

Eileen Opatut, senior vice president of programming, explains that food is a panacea for all kinds of crap out there -- both on television and in the world. "When the world is out of control, food is something you can feel good about," she told me over the phone. "There is immediate gratification in food." For the last five years, Opatut has stayed true to her belief that the subject of food doesn't need the kind of angry dressing other networks heap on their programming. On her network, she says, you'll find no "slings of torture," even though mean-spirited programs do well elsewhere (see "Joe Millionaire," "Big Brother" and "Survivor," if you must).

Instead, Opatut and her staff hand-pick shows that reflect the channel's commitment to airing informative, interesting and funny programming without stooping to cheap tactics. "Food is our friend," she said. "I don't ever want to use food in a derogatory way."

So when I heard that Food Network was introducing a new "reality lineup" this spring, I wasn't sure what to make of it. The idea seemed a little absurd -- after all, Food Network has always been "real." It's not like they show movies or cartoons -- even Emeril Lagasse's short-lived sitcom was on another network. And what about the inherently degrading nature of reality TV as we know it? Food Network is too nice for that.

I breathed a little easier after watching the shows. It's clear that Food Network's definition of reality is unlike that of its TV brethren. The format is the same, with its competition-driven shows that pit strangers against each other for some sort of prize, and they're definitely out to woo the same audience (viewers aged 18 to 34, who make up Food Network's fastest-growing demographic). The difference is there'll be no cockroach eating or back-stabbing on the nice channel. Which, for many, will be a relief.

Fortunately, "Date Plate" isn't like other dating shows -- for one, it's sincere. You won't find any pop-up blurbs or insulting cartoons, nor ex-girlfriends piping in commentary from a souped-up Winnebago stakeout bus. In "Date Plate," two contestants get $50 and two hours to drum up a meal for a single of the opposite sex.

After watching a short video diary in which the single describes herself, the contestants choose their menu based on what they think she'd like. With the help of two easygoing chefs (one for each cook), they shop for ingredients and cook a meal, including dessert. Then they wait unseen for the girl's decision, which is based solely on the food each prepares. In this show, it's not about who's got the hottest bod, but who leaves your taste buds the hottest. The winner gets a real date with the single, this time leaving the cooking to professionals.

"Date Plate" proves what I already know: You can tell a lot about people by the ingredients they use and how they cook. Naughty boys sear, good ones roast. In the series premiere, the woman chose her cook because his dish was creative and humorous, even though the other meal was "more like what she normally eats."

What really stands out in "Date Plate" is the caliber of its contestants. Gone are the lame-brained boys and narcissistic coeds we've grown accustomed to; "Date Plate" features people I'd actually like to go out with. Take the boys in the first episode -- either one could have been that guy at the vegetable market. One's a jovial opera singer with a great head of curly hair, the other's a sensitive bartender (and both have nice arms). Compared to the introductions in normal dating shows, in which a guy might describe himself as a flag football freak who likes hot girls, these contestants sound downright poetic.

"Food is quite possibly the most sensuous thing. Anything having to do with your taste buds or your mouth is sensuous," says the 22-year-old barkeep. The woman they're fighting for is equally likable; a media professional whose hobby is carving wood in the shape of butts, she's funny and cute and normal.

Since none of the contestants in "Date Plate" is a food professional, it's like watching your well-meaning but not-so-skilled boyfriend make you dinner. (This in contrast to the swift-fingered gourmet on those Turning Leaf wine commercials.) Watching the men cook a meal designed to win a woman's heart is sweet and cathartic, and actually much more interesting than wincing through a Jacuzzi in "Blind Date."

The feel-good quality of "Date Plate" fits in with all of Food Network's let's-play-nice programming. By ending the show on a high note -- i.e., before the real date actually begins -- the viewer leaves with the cozy feeling that love will win out in the end.

"Date Plate" is one of three new reality series premiering on Food Network aimed at attracting new viewers. Also debuting is "Food Fight," a cooking competition that pits "civilian" cooks against each other (in a recent taping, the NYPD battled the FDNY in a flank-steak grilling competition), as well as the second season of "Cooking School Stories."

In "Cooking School Stories," viewers follow seven young wannabe chefs as they carve their way through a two-year culinary program at the Art Institute of California in Los Angeles. In the first episode, after learning a bit about the characters' humdrum home lives, we see them in the test kitchen, tentatively cutting carrots in julienne style, mincing parsley "into dust," and attempting to make a roux. The mild-mannered chef-professors help the students by praising their efforts and gently explaining where they went wrong in their flour-water ratio. Unlike the teachers profiled in books like Anthony Bourdain's "Kitchen Confidential," these guys don't ever raise their voices or make their students feel foolish.

Having never stepped foot inside a cooking institute, I had always assumed that the first year of culinary school must be as intimidating, stressful and intense as your first six weeks in medical school or the Army. If that's true, you'd never know it from this show. Food Network once again succeeds in making a potentially pressure-filled situation bucolic and nice -- in this case, frankly not the best recipe for exciting television.

I did perk up when the students had their first big test. The assignment was to whip up three distinctly different sauces in 30 minutes. "Here we go!" I thought excitedly, remembering how many episodes of the time-sensitive "Iron Chef" kept me on the edge of my couch. Will they beat the clock? Will they add too much salt? Will losers get a beating? (I grabbed a brownie.)

Over a bad rock soundtrack, the teams get busy. Fire leaps from the stoves, mushrooms fly and sauces thicken under the students' whisks. All does not go well. One group has time to make only one sauce. Another pair goes five minutes over their allotted cooking time. As the students slouch back to their butcher-block tables, I'm expecting the weak to get bitch-slapped by the chefs -- "How dare you vacate your station!" one would yell, tossing his toque into a sauté pan. Instead the teacher says, in a calm voice, "Yes, this is a little runny, but good effort." And the guy who finished late isn't docked points at all.

As these chef newbies get deeper into their schooling, I expect the stakes will be raised. At some point there may be catfights and illicit sex and ego-shattering test results -- I sure hope so. For audiences used to this kind of addictive drama in their reality shows, merely being on the inside of a cooking school doesn't quite cut it.

Hardcore Food Network fans like myself will probably watch anyway, because the show has plenty of practical information. For those of us nursing cooking school daydreams, "Cooking School Stories" is a great way to experience the process without shelling out the time or money. So what if it doesn't have the excitement factor of "Survivor"?

This season, Food Network proves that malice needn't be an ingredient for interesting, if not always provocative, television. Is it reality? Not exactly. Does the new lineup signify big changes in Food Network's direction? Not at all. For all the pomp, the network's new shows are pretty much exactly like their old shows, albeit with younger characters.

For Food Network, "reality" means helping viewers live in the real world while preserving the voyeurism of the genre. "Date Plate" instructs viewers on how to choose fennel. "Food Fight" explains how to cook beef for 30. And "Cooking School Stories" is packed with info any home cook would be glad to have -- do you know the correct angle for sharpening knives?

As with any trend, reality TV is bound to grow predictable and annoying (if it hasn't already). When audiences finally tire of watching C-list celebrities wince through a glass of rat's milk, Food Network will show them how to turn that milk into a classy béarnaise. What could be more real than that?

Carly Jacobs is a freelance writer and television producer in New York.