Americans should stop listening to the fear-mongers and travel overseas. It's the best way to start bringing the U.S. back into the world community. 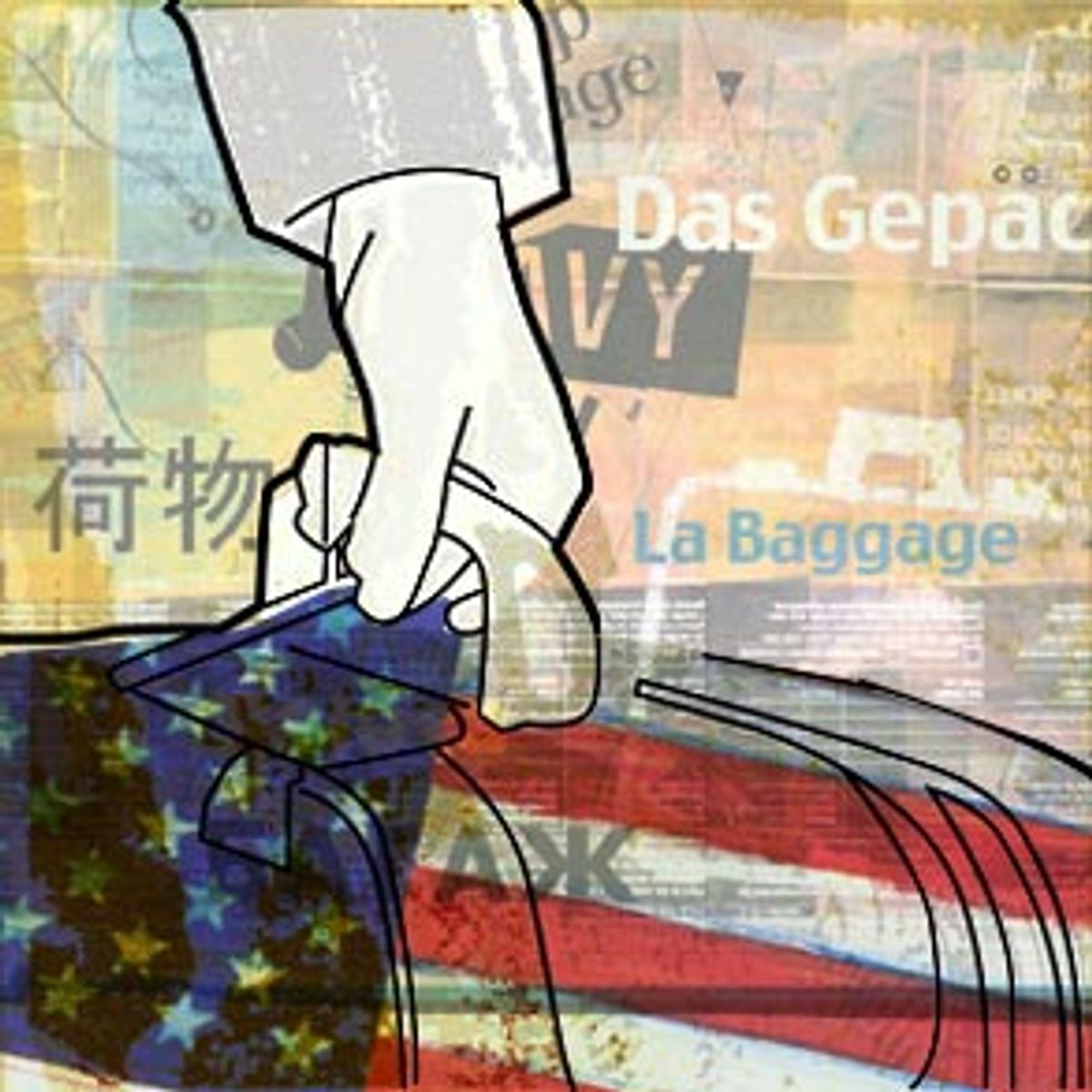 In October of 2001, as American bombs peppered Afghanistan, I opened my suitcase and began packing. Sunblock and snorkel, Scrabble and socks, all found their place in the Chinese puzzle of my luggage. As I was jamming a Telephoto lens into my sneaker, my friend Velo rapped at the door.

"I can't believe you're leaving," he said. "Aren't you terrified?"

"It's too much trouble to change my flight."

"The airline would understand," Velo frowned.

"I know." I plucked my travel clock from the nightstand, and slipped it into my toiletry kit. "But I have a meeting. As awful as it sounds, I have to be in America by Tuesday."

Outside my window, the sun glittered on the Celebes Sea. Velo and I were standing in my hotel room in Indonesia, where I'd just completed a two-week assignment for Outside magazine. Riots in Jakarta, and the threat of reprisals against Americans, had earned the most populous Islamic nation in the world a grim travel warning from the U.S. State Department. This was the last place on earth my mother would want me to be.

Yet few places in the world had ever seemed safer, or more welcoming and friendly. Remaining in Sulawesi was a lovely thought; it was the idea of returning to the United States, with its post-9/11 hysteria and militarism, that filled me with dread.

Today, with the United States blasting its way to Baghdad in a war that has polarized our citizens and appalled much of the world, the notion of traveling anywhere may seem preposterous. I take the opposite view. There has never been a better time for Americans to travel, or a more important time for us to do so.

I say this not because hotel rates are low, or travel meccas like Nepal and Bali are blissfully uncrowded, or desperate airlines are practically giving away tickets. It's my conviction that, if we hope to arrest the damage wreaked by the Bush administration and salvage whatever goodwill remains on this planet, we have to get out of our bunkers and meet the world's inhabitants. And they have to meet us.

As the world knows from watching TV footage of boisterous antiwar demonstrations in San Francisco, New York and other homefront cities, not all Americans support the shock and awe being rained on Iraq by the Bush administration. Citizens of countries from Southeast Asia to Latin America to the Middle East, accustomed to governments of corrupt and self-interested bureaucrats, are well aware that Americans are not synonymous with their leaders -- especially our present leaders, who assumed power in what many educated people, from Italy to Iceland, interpreted as a corporate coup d'état.

For months leading up to the war, the hawk lobby in Washington and in the media did its best to demean France, Germany and other countries opposed to invading Iraq and instill an us-vs.-them feeling in the American public. It wasn't a hard sell. Like the rest of the human race, Americans are subject to primal impulses rooted in eons of tribal behavior. It doesn't take much to throw us back to our old habits: snorting at outsiders and stomping around the fire pit while "sheltering in place." There is nothing the White House would rather see than a nation of shut-ins, held hostage by fear and animosity. George W. Bush may have set foreign policy back 50 years -- but he's turning our global consciousness back 40,000.

Despite all this, America itself, as opposed to the cabal that has hijacked it, is still widely admired and respected. People are fascinated by our country and its high and low obsessions. In February, as I traveled through Burma and Thailand, Michael Jackson and the Columbia disaster were front-page news. If I mentioned to a Thai (or a traveling European) that I was from the U.S., the reaction was consistent: "America! Great country! But hey -- who's this Bush cowboy, and what does he think he's doing?"

This was true six weeks ago. How true will it be six weeks in the future, as images of death, destruction and orphaned children continue to saturate the global airwaves? No one can say. One lesson we are learning from the Bush administration is that a handful of supremely arrogant people can create enormous, possibly irreversible harm -- and they can do it very quickly.

I see travel as an antidote to this mess. If our leaders are degrading the image of America and Americans, we have to restore that image with dialogue and eye contact. If our own diplomats are forbidden to express their displeasure with this administration's policies, you and I must take their positions in the field. And if our sense of the world is withering away, starved by the scraps of information we are so selectively fed, we must gorge ourselves on the feast of overseas travel.

Despite the illusion of worldwide awareness created by satellite television and the Internet, nothing compares with actually walking the streets of foreign lands and talking to local residents. Our perspective on our world and its people is narrowed by a news industry that, like our government, thrives on anger and anxiety: television graphics of crude country maps outlined in flames or emblazoned with tanks and war planes. To travel with open eyes is to redraw those maps, and connect with the human faces and universal concerns behind the cardboard cutouts on the evening news.

In August 1999, I traveled to Iran to write about the millennium's last total solar eclipse for Salon. When I arrived, I broke from my small American group, choosing to watch the event from Esfahan's huge public square. The vast plaza was packed with more than 50,000 Iranians. There were reporters and cameras from all over Persia, Europe and Central Asia. Shortly before the miraculous moment when Iran would be cast in shadow, a demonstration erupted across the square. Banners were lofted and American flags set afire as scores of demonstrators chanted anti-U.S. slogans. The cameras muscled in, and the noisy rant was prominently featured in news reports across the world. For millions of viewers, this was just the latest eruption of rage from Iran: a nation of fist-waving extremists, with an undying grudge against the Great Satan.

Here's what those viewers didn't see: the moment the demonstration began, all the Iranians in my vicinity -- men, women and young people -- moved toward the visiting American, forming a protective ring around me and my gear. One man put his hand on my shoulder, assuring me that I was safe. Another poked my arm, and sneered at the pack of demonstrators. "They should get a job," he muttered.

In an era where communication has become almost borderless, the Bush administration is isolating America, and Americans, from the planetary community. Our most important challenge is to reverse this trend. Travel -- more than anything else we can do as individuals -- shatters that isolation, and forges bridges of goodwill and understanding. A conscious traveler is nothing less than an ambassador-at-large: a voice and presence with astonishing power, able to shatter the spiral of suspicion, and to honor the humanity of everyone he or she might encounter.

As an American traveler, one faces tough questions about our government's unilateralism, the Kyoto Accords, the export of pesticides, our gun culture and the death penalty, among others. How we reply, surprisingly, is actually not so important. In my experience, the main purpose of these queries is to get us to listen. For though it may seem preposterous, people in developing countries -- and throughout much of Europe -- sincerely believe that having the ear of an American is tantamount to having the ear of America.

They're absolutely right. As we all know, Americans who travel are very vocal about their experiences. An intense dialogue with an Egyptian teacher; a cup of chai with a Tibetan refugee -- we might share these encounters with dozens of friends, who pass them on. Some anecdotes even branch out through the Internet, adding to the popular wisdom about countries and cultures far removed from our own. A simple story about a Tehran shopkeeper -- who presses a cassette tape of traditional Iranian music into the hands of an American visitor, refusing any payment -- can counteract months of dehumanizing propaganda about the "axis of evil."

How can we take the lessons of travel, and roll them over into positive action? Over the past few months, I've set out to explore these questions. The result has been the creation of an international online community called Ethical Traveler. I launched this Web site for everyone who has traveled -- whether on a monthlong trek across the Himalayas or a three-day cruise around the Bahamas -- and believes that travel has expanded their worldview. It's for those of us whose journeys, long or short, have inspired deeper concerns for this planet and its people. Ultimately, it will become a forum through which travelers can join their voices, and take actions that make this world a more open and welcoming place.

The community is in its formative stages, but it's growing fast. Travel and tourism is the largest industry on earth -- and I'm confident that, someday, an alliance of open-eyed travelers will have at least as much power as an association of rifle owners. Meanwhile, keep your passports current, pull out your maps, and -- as soon as possible -- consider a vacation far from the security of the homeland. Those frequent-flyer miles will never be more valuable than they are right now.