Brawl in "The Family"

ABC's clumsy new reality series takes a cartoonish swing at class and cultural difference. But the Italian-American family at its center won't play the network's game. 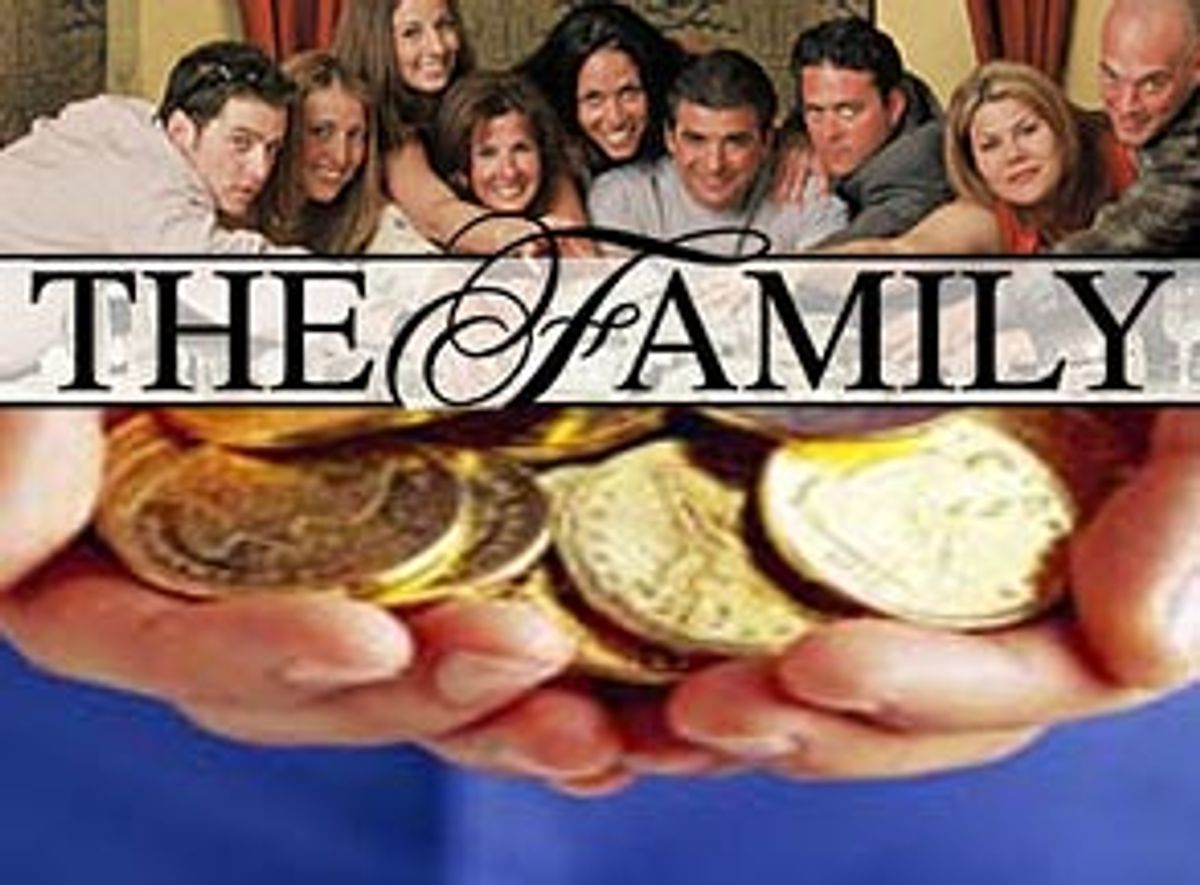 Americans don't discuss class, we telegraph it. "She looks like a guest on Jerry Springer," we say. "He's a thug in gold jewelry who drives a souped-up Lexus." "She blasts 'Achy Breaky Heart' in her Pontiac Firebird on her drive home from Hooters every night."

In keeping with this policy, ABC's new reality series "The Family" (Tuesdays at 10 p.m.) isn't about class. This is not a show about thrusting a working-class Italian-American family into a glitzy setting and editing the whole experience down to confrontational, vainglorious or ignorant comments. "The Family" is about, uh, money ... and family! How far will these cretins, er, family members go to win a million dollars? Will they openly challenge each other for the money like common trash, or play nice and seethe under their breath, like well-behaved WASPs? Is Italian blood thicker than bottled bubbly spring water? Stay tuned and find out!

Think of it as "Survivor: Palm Beach," only the contestants are related to each other, and the judges (aka the "secret board of trustees") are the house staff. There are reward challenges, in which the family competes on the unfamiliar turf of tennis courts and polo fields for unfamiliar prizes like yachting trips, and elimination challenges, which place two family members on the chopping block for one to be voted off by the staff. Replace Jeff Probst with what appears to be a robot replica of George Hamilton, and prepare to be underwhelmed, both by the ratings and by the dippy "Falcon Crest"-style spectacle.

Naturally we're presented with the same cartoonish TV wealth we saw in the laughable waltzing and fine dining of "Joe Millionaire," a "Little Orphan Annie" vision of wealth that must've sprung, fully formed, from the head of some middle-class housewife during the Depression and has somehow survived ever since. The family is fed snails and frog legs; challenge winners are rewarded with a ride on a Lear jet, during which they're served champagne and strawberries dipped in chocolate. Ringo Allen, the social secretary, gives the group a lesson on which forks and spoons to use. Rich folks are so nutty, aren't they? With their crazy silverware and their weird foods and their champagne! But when family members tell the camera, earnestly, "I could really get used to this," you wonder if they're referring to getting drunk on champagne around the clock (who couldn't?) or having more than one fork on the table at the same time.

Not surprisingly, the show's creators go out of their way to make the family members look like jerks. Why, they hardly know how to play tennis! Listen to silly Cousin Dawn Marie referring to the U.S. Open as the "U.S. Opening"! Watch how Aunt Donna has the gall to tell the French chef that her family prefers dried basil to fresh! "None of us had ever sailed before," offers Cousin Robert. Never sailed before? Just imagine! Who are these clods?

If you're still not getting the message, who better than the house staff to pipe in with petty observations and empty snobbery? Ringo proclaims that he's personally offended by Cousin Mike's tattoos, as well as his foul and deeply reprehensible act of reinserting his dirty napkin into a napkin ring. In deciding whether to eliminate Cousin Melinda, the French chef, Frank Porcher, offers this evidence against her: "The only time I saw [her] in my kitchen, that was to ask me for ketchup!" The horror!

But even the staff has a heart eventually, choosing loudmouthed but determined Dawn Marie over the relatively innocuous Melinda. "Dawn Marie is a train wreck in high heels," says Ringo, "but she's also a fascinating woman, and I would like to see [her] go all the way."

Still, the creators of "The Family" won't let the compassion of the house staff slow down their compulsion to expose their contestants as common folk. In "The Family Craps" competition, family members are asked to speculate about the results of an absurdly insulting quiz they took earlier. "More than half of you have had sex in another family member's bed. True or false?" Hamilton asks with a pompous sniff, apparently oblivious to the fact that he's only demeaning himself. "Someone here has spent a night in jail, true or false?" (That one, by the way, is false.) "More than half of you have worn someone else's underwear ..."

Such blatant jeering poses a question: Does "The Family" really aim to compare this middle-class Italian family to millionaires who employ butlers and stylists, or to compare them to upper-middle-class WASPs who presumably sail and play tennis, have lovely table manners and don't screw in each other's beds?

"Competing against each other is what we've been doing our whole lives," Anthony tells us, and it shows. But while we're urged to judge the family's open confrontation as unseemly, it's not easy to do so. These people may be irritating and a little dense at times, but they're also very straightforward and honest with each other. There's shouting and tears, but everyone seems perfectly comfortable with it. In fact, the lowest insult among them seems to be an accusation that one or the other is acting "fake." Shame doesn't come from repressing too little (as it might in so-called classier circles), but in repressing too much.

In the end, we feel the most sorry for the show's editors. It must be frustrating for them, trying to drum up shock and moral outrage among a family that seems immune to both. The best they can do is repeat some of Anthony's bolder comments over and over again. "My dad trying to control everything annoys me, because I like being in control," he tells us. "Beating my father would be the most satisfaction I could possibly get out of this game." How sick, how primal! Or so it might seem, until you realize that he's probably said the exact same thing to his dad a million times before. What insights does his mother, Donna, have to share? "My son Anthony is a friggin' horndog," she offers. Sure, it seems tense when Anthony condemns his mother for putting Cousin Maria on the chopping block, at least until we see that Donna is right there, a few feet away, and so is Maria, and neither one seems all that upset by any of it.

Ultimately, despite the fact that the family is clearly comfortable with its internal feuding, the show's producers seem determined to cast the competition in a negative light. If they wanted a viciously mean vibe, why didn't they cast a family of hopelessly repressed, passive-aggressive types who communicate in coded language and veiled insults? While even the house staff has quickly caught on to what's interesting and likable about this family, remarking on how tenacious and frank they are, the show's creators are still stubbornly beating home the story line they pitched months before the show was even cast.

This attachment to a prefabricated plot is emerging as a fatal flaw of bad reality programming. It's a flaw that superior shows like "Survivor" and "The Amazing Race" avoid by creating drama out of what's really happening, presenting the full range of experience -- tense exchanges, warm moments, comic relief -- instead of stubbornly focusing on mean-spirited behavior and insults.

Thus, while players on "Survivor" enjoy the luxury of being skillfully edited until they're larger than life, members of "The Family" are reduced to cartoonish, squabbling ghosts of their real selves. No wonder no one is watching.