John Travolta's sneaky! Samuel L. Jackson is tough as a boiled owl! But that's all there is to say for this nonsensical military action flick. 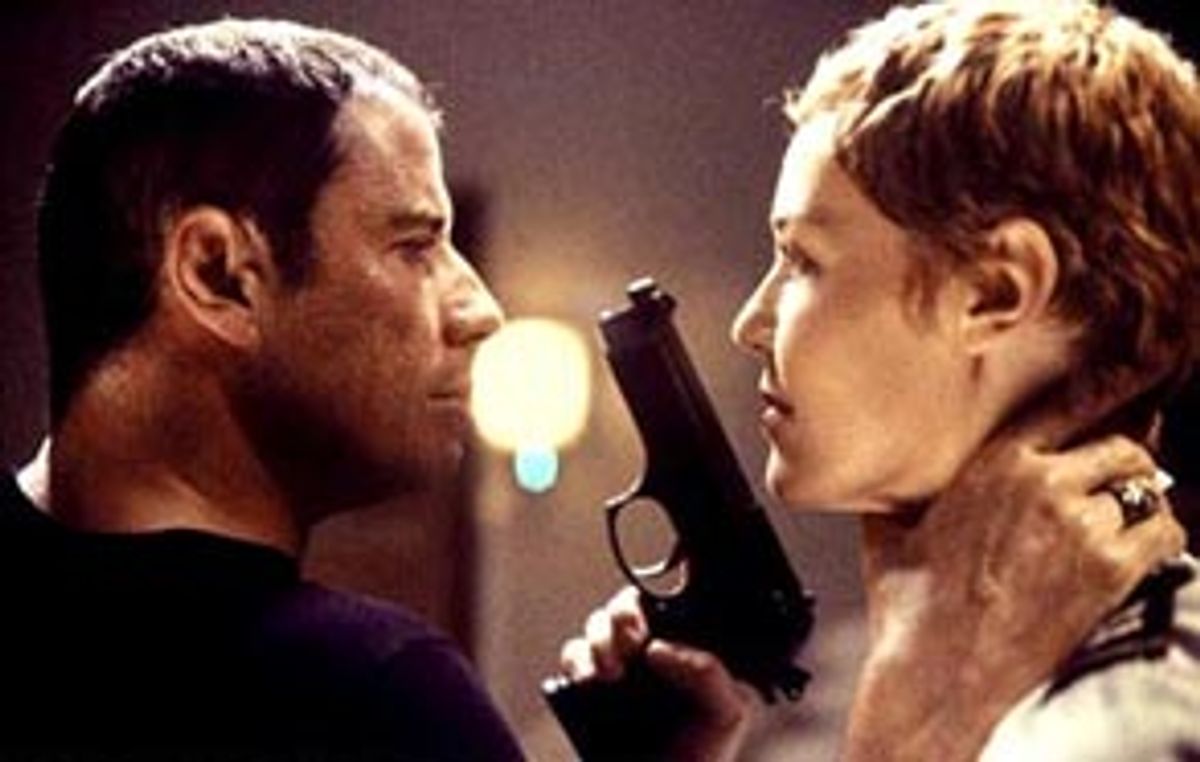 What's happened to the middles of American movies? John McTiernan's "Basic" is just the latest example of a thriller in which the beginning and the end make at least a tiny bit of sense, but the connecting stuff in between is just an inscrutable muddle of dumb twists, red herrings and ho-hum shockeroos -- it's like a boa constrictor with a huge, undigested blob of plot bulging from its belly.

There's lots of action in "Basic," and the movie wouldn't be so bad if it were honest enough to acknowledge that's its only reason for existing. But "Basic" struggles mightily to earn those fancy adjectives "complex" and "multilayered," and it's neither. During a routine exercise in the jungles of Panama, a group of elite Army Ranger trainees, led by tough-as-old-boots commanding officer Samuel L. Jackson, suddenly seem to go bonkers, shooting at one another and blowing up their surroundings with grenades.

Brian Van Holt and Giovanni Ribisi are the only survivors, and they both spend the first section of the movie refusing to talk at all, only to tell conflicting stories when they finally do spill the beans. Apparently, they too have seen many, many movies in which "Things are not always as they appear," and so John Travolta, a former Ranger who is now a possibly corrupt DEA agent, is brought in to worm the truth out of them.

Connie Nielsen, an actress who has lent class and gravity to just about every movie she's appeared in (from "Mission to Mars" to "Gladiator" to the unreleased French film "demonlover"), plays the Army captain assigned to "officially" investigate the case, and she has a tough time accepting the renegade Travolta. But not even she can improve "Basic."

The script, by James Vanderbilt, piles one implausibility atop another under the auspices of building suspense. One survivor claims a beleaguered soldier who had been taunted by Jackson killed the sergeant and then tried to bully the others into helping him cover up his mistake; the bodies were subsequently blown away by a hurricane. The other soldier has a significantly different story, which means we get to see two versions of the bloody jungle skirmish (told in flashback sequences) -- twice as nice if you like that sort of thing.

But if you actually want a movie that makes sense, you're out of luck. By the time you get to the part about the white soldier who switches dog tags with a black one to disguise his identity (apparently, the Army never thinks to check up on this sort of thing), you may not believe your eyes and ears. None of the actors -- not even Nielsen, who's hampered by a weird Southern accent, or the generally terrific Ribisi, who shambles through the movie speaking in a flat, nasal monotone that's simply bizarre -- gives a performance worth watching.

John Travolta was at one time one of the finest actors walking the face of this planet, but he now roams its surface like a cursed soul, doomed to give the same performance again and again. This time, is he a good guy who only seems bad, or a bad guy who might turn out to be good?

Only McTiernan -- the king of the "Die Hard" empire, but also the man who gave us a highly entertaining remake of "The Thomas Crown Affair" -- knows for sure, and he may be the only one who cares. By the time "Basic" rounds its last corner toward that final plot twist, you might feel like part of an elite squadron yourself. Congratulations! You've just completed the most useless and tedious training exercise in the world. Watching a movie should never be such torture.