Wild in the streets

Even ultra-liberal San Francisco is growing weary of the ongoing direct action protests. 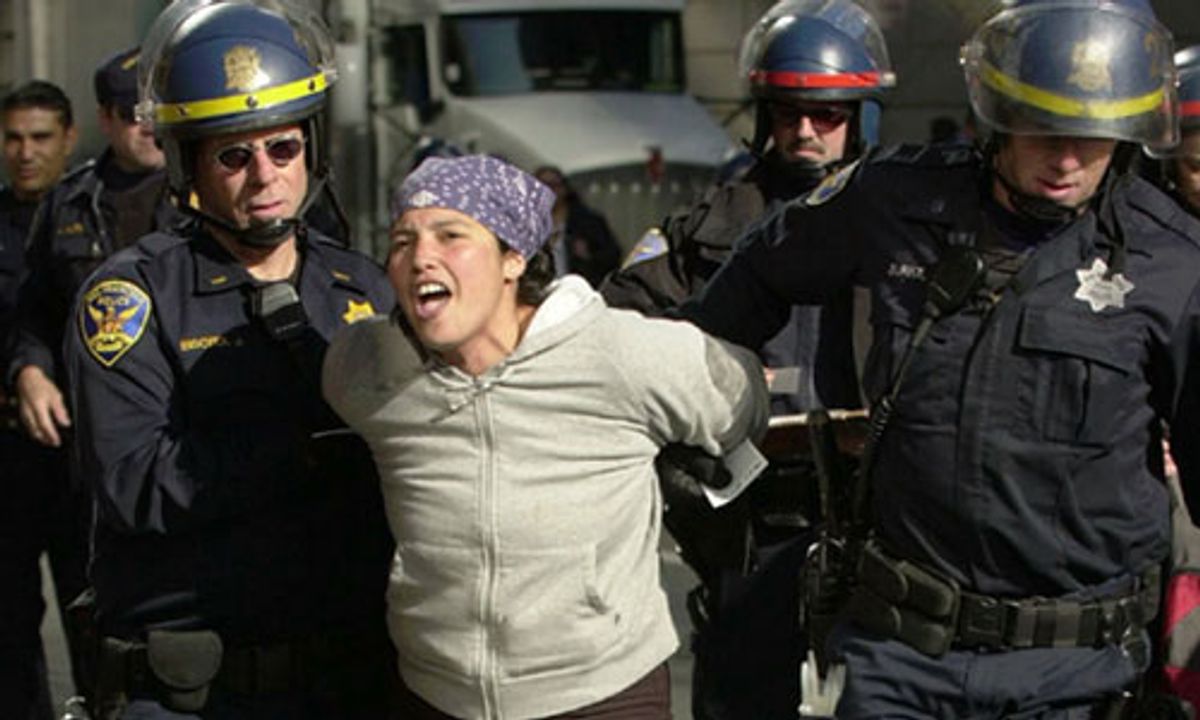 Tuesday evening at 6:30 p.m., some 110 bike riders streamed down Market Street through the Financial District, flashing the peace sign to downtown commuters. Flying a flag proclaiming "Bikes not Bombs," the cyclists pedaled their antiwar protest.

"If we really want peace and security, people need to confront their own fossil-fuel addiction," said Patrick Reinsborough from Direct Action to Stop the War, a loose coalition of some 100 smaller groups, such as the Brass Liberation Orchestra, the French Kissers, Global Intifada, Freedom Uprising, Hippies Gone Bad, Dykes Against Military Narcosis [aka DAMN], Angry White Folks Undermining Colonialism and Killing [AWFUCK] and Bikes Not Bombs. Last Thursday, they used civil disobedience to turn the streets of San Francisco into a state of "anarchy," as the acting chief of police called it, blocking more than 30 intersections and resulting in more than 1,400 arrests in a single day.

But by this Tuesday night, the protests had largely quieted -- for the moment -- and a comically huge police presence dwarfed the mini Critical Mass of Bikes Not Bombs. Flanking the bikers, a line of motorcycle cops kept the pedalers for peace contained in one lane. Six squad cars, with lights flashing, followed the bikes, along with two completely full city buses; every last bus passenger a cop decked out in riot gear. Yet no arrests were made.

In the last few days, the cost of policing the protests has become more controversial than the war itself in mostly antiwar San Francisco. City officials, most vocally Mayor Willie Brown, have charged that the protests are costing anywhere from $450,000 to $1 million a day, in police overtime and other services -- at a time when the city is facing a $350 million deficit, the worst in its history. "It's like defecating in your own nest," Mayor Willie Brown said of the protests, speaking to reporters at City Hall on Tuesday afternoon.

On the fractious Board of Supervisors, how to pay for the protests has become a divisive issue, with the board's most conservative member, Sup. Tony Hall, introducing a resolution Tuesday asking for the city attorney to "pursue legal remedies" to recover the costs of the protests incurred by the city from the organizers of the actions themselves, to protect taxpayers. Yet the board president is Green Party member Matt Gonzalez, and he appeared at a press conference with protesters on Tuesday to call for a hearing by the city's budget committee to look into the big numbers being thrown around by city officials. Gonzalez and others suspect the city may be using the high cost to try to discourage protesters from taking to the streets again.

"Clearly, it's political opportunism by the Brown administration to try to blame the protesters for the city budget crisis," says Reinsborough of Direct Action to Stop the War, a 30-year-old environmental educator and community organizer who lives in San Francisco.

But who are these roving bands of demonstrators who've tied the city in political, logistical and fiscal knots in just a week? Even if it seems the police have overreacted since last week's massive demonstrations, it's easy to understand why: Direct Action to Stop the War isn't an organization at all, but a loose coalition of some 100 small groups, and it's committed to spontaneous events that rely on an element of surprise.

That's not to say they're disorganized. It takes a lot of organization to create the kind of disorganization that beset San Francisco last Thursday. That disruption took almost two months of planning by Direct Action, which formed last October when Congress voted to authorize military force in Iraq.

It's hard to generalize about a group as diverse as Direct Action that subscribes to only one shared belief: the war is unjust, and must be stopped. But dropping in on one of their planning meetings, you get an impression of young, white, activist San Francisco, mixed with a stiff dose of graying "I still remember my Vietnam War protests" types for good measure.

Direct Action operates on an "affinity group" and "spokescouncil" model, a organizational structure used by anti-nuke protesters in the late 1970s, which traces back to the earliest anarchist movement in the 19th century. Each affinity group typically has five to 20 members, and the group makes its own decisions about what action to take. Within each affinity group, different protesters take on prearranged roles during the action: medical aide, legal observer, jail support and a "vibes-watcher" charged with keeping everyone's spirits up. Groups also get together to do larger demonstrations, in so-called "clusters" of several affinity groups. Last Thursday, for instance, a group called Code Orange for Liberation linked up with Global Intifada, St. Patrick's Brigade, Charliesia Alexis and OPP for their action downtown.

At a weekly spokescouncil meeting on Monday night at St. Boniface Church in the Tenderloin, the protesters started the meeting by calling out words that described how they were feeling: "Hopeful!" "Tired" "Grateful!"

Affinity groups send a "spoke" to the meeting to represent the group at the spokescouncil, where decisions are made by consensus. Anyone can come to the meetings, but it's the spokes who do the talking for their groups, while their fellow activists whisper to them and pass them notes. The protesters sit in a circle and discuss the proposals for future actions -- anyone for blocking the Stockton Tunnel? -- which are written on butcher paper, and plastered on the wall.

While individual affinity groups decide what they want to do, it's the coordination through the spokescouncil that made it possible last Thursday for the protesters to divide and conquer San Francisco's downtown. That pre-organization enabled the coalition to absorb the hundreds of other protesters willing to risk arrest who arrived spontaneously without a group at Justin Herman Plaza for "direct action orientation."

For instance, Les Beats -- aka Beatniks Engaged Against Tyranny -- was a group of 15 who'd formed the Monday night before the war started. They adopted the theme of a French picnic when they occupied the intersection at Washington and Embarcadero last Thursday under a "Baguettes Not Bullets" banner. But they were able to recruit 50 unaffiliated protesters to their cause from Justin Herman Plaza.

Juliette Beck, an organizer for Public Citizen who protested with Les Beats, said that tactical teams also made sure that there was a videographer at each intersection, and a communications team bicycled the city carrying radios and walkie-talkies to keep the different affinity groups and clusters plugged into what was happening elsewhere. "That gave us a sense of solidarity," she said.

And it's the dispersed but coordinated network of many groups making their own decisions that makes the police response perpetually vulnerable to seeming either overzealous, with dozens of officers chasing after a parade of bicyclists, or woefully outnumbered, as they were in last Thursday's anarchy.

Surprisingly, for San Francisco, the overmatched police earned more sympathy than the protesters in some normally liberal quarters. The San Francisco Chronicle's Rob Morse even found a protester to praise the cops: "If this were Washington, we'd all be bloody by now," said an honest older protester. "The cops here are really great." Added Morse: "And so they are. They're worth every penny of that $500,000 a day that will never go to General Hospital or housing for the poor." Morse blasted the demonstrators as "high on their own rage and self-righteousness," and asked: "Why should a self-appointed army of occupation forcibly try to make San Franciscans feel pain, especially when we're against the pain of war already?"

"I think also that's a very small cost to pay given what we're talking about here," said Jason Mark, a spokesperson for Global Exchange, who joined the protests last week. "On Thursday, America really did change, it really did become a different country in launching this unprovoked war. We showed the world that, first of all, a great many Americans are not willing to consent to or cooperate with this war." Mark added that he thinks the San Francisco Board of Supervisors should send the bill for the cost of the protests to Washington.

The protesters seem aware that they may be losing the battle of public opinion. When social services are already being cut, it's easy for opponents to paint them as spoiled (mainly white) narcissists, taking money away from the poor. They're trying to strike back. On Wednesday morning, activists were stationed outside BART stations in San Francisco handing out leaflets to commuters, in what one organizer called "Phase 2" of the direct action, an "outreach" to explain to San Franciscans why their city had been shut down. "Our protests have cost the city money. But the unjust war with Iraq is costing the city significantly more," reads "An Open Letter to the People Who Live and Work in San Francisco and the Bay Area -- Why We Take to the Streets." "And, we must ask ourselves, 'Is democracy only acceptable if it comes with a low pricetag?'"

Some Direct Action supporters even work for social service agencies facing budget cuts. Martha Hawthorne, a public health nurse who works at Castro Mission Health Center, took a vacation day last Thursday to protest at the intersection of Powell and Bush streets with a group of fellow bluegrass musicians. She says focusing on the costs of the protests is ignoring the cost of the war itself. "When you compare that to a B-52 bomber, when you compare it to one day of occupying Iraq, it's nothing."

But can the protesters keep the focus off the morality of their own actions and on getting their antiwar message heard? Stay tuned. Direct Action to Stop the War has put out a call for another mass day of civil disobedience on Monday, April 7.