Explosion kills about 50 in crowded market. 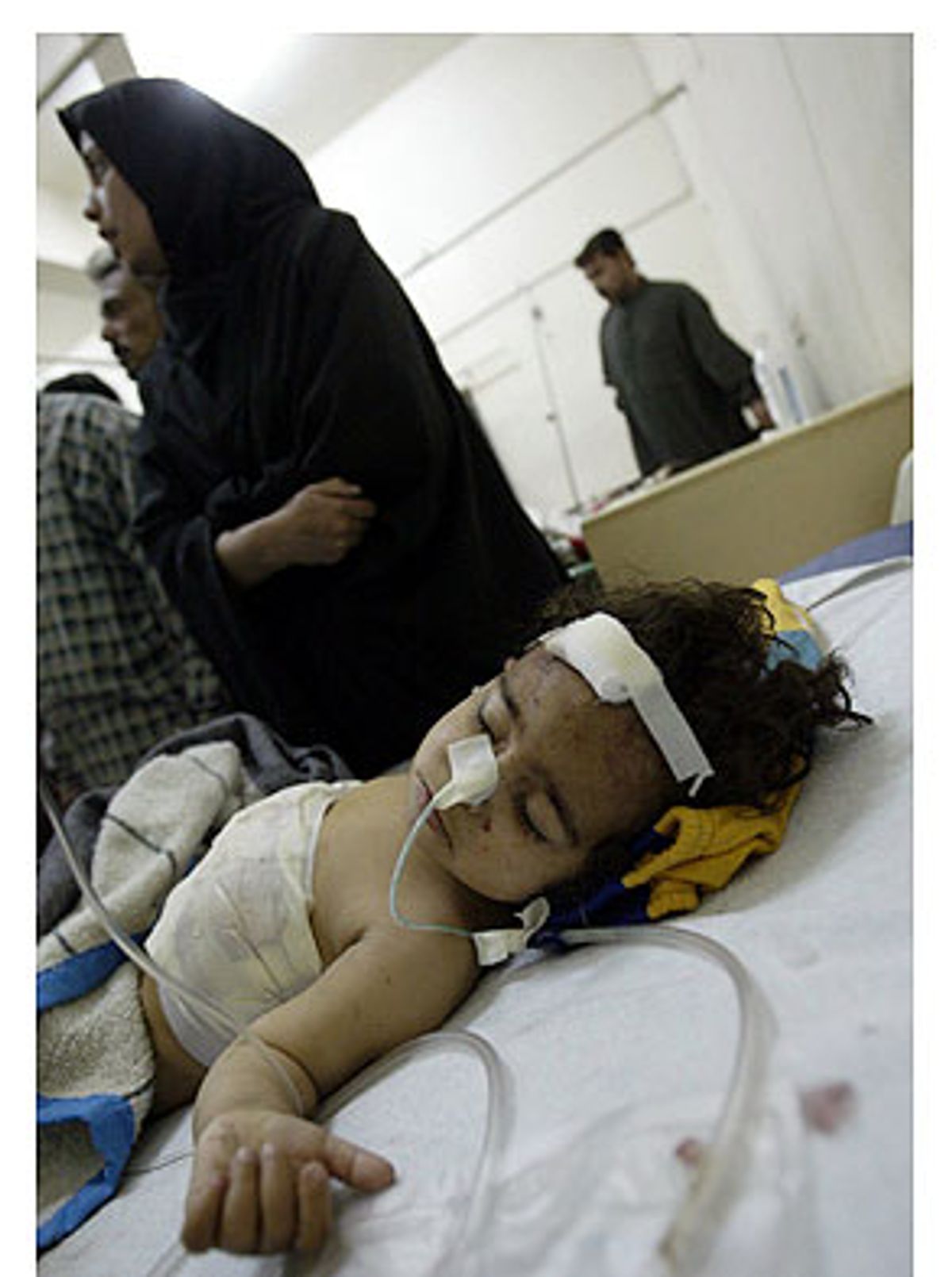 Iraq's information minister said at least 58 people were killed Friday in a crowded market in northwest Baghdad by what local officials called a coalition bombing.

The market was strewn with wreckage and there were bloodstains on a sidewalk. Crowds of mourners wailed and blood-soaked children's slippers sat on the street not far from a crater blasted into the ground.

The U.S. Central Command in Qatar said it was looking into the report. Iraqi officials have blamed U.S. forces for explosions at another market that killed 14 people on Wednesday. The Pentagon had denied targeting the neighborhood.

"Why do they makes mistakes like these if they have the technology?" asked Abdel-Hadi Adai, who said he lost his 27-year-old brother-in-law Najah Abdel-Rida in the blast. "There are no military installations anywhere near here."

Information Minister Mohammed Saeed al-Sahhaf said 58 people were killed, and said the number was likely to rise because many others were wounded. There were conflicting reports, however, on the number of casualties.

Haqi Ismail Razouq, director of al-Nour Hospital, where the dead and injured were taken, put the death toll at 30 and the number of injured at 47; surgeon Issa Ali Ilwan said 47 were killed and 50 injured. Witnesses said they counted as many as 50 bodies.

There was no immediate explanation for the discrepancy.

"Most injuries were caused by shrapnel," said Dr. Ahmed Sufian. "Blood was everywhere when the casualties began to arrive. "The women and children were screaming. We were overwhelmed. What will they hit next? This hospital?"

The Al-Nasr market is in the working-class district of al-Shoala. Witnesses said the bombing took place when the market was at its busiest, around 6 p.m. They said they saw an aircraft flying high overhead just before the blast.

The explosion left a crater the size of a coffee table on a sidewalk in front of a row of food and other shops. Curiously, nothing was blackened in the immediate surrounding area.

Water was seeping from ruptured pipes and corrugated iron was dangling from the roofs of the damaged shops.

A red Volkswagen was parked only a few yards from the crater, peppered with what could have been flying shrapnel.

At the hospital, relatives of the dead and wounded wept hysterically and yelled the names of their loved ones. Many searched for relatives or friends.

Speaking from his hospital bed, Ali Kheidir Saleh, 23, said he was in a house near the market when the blast brought down part of the house.

Another of the injured, 52-year-old construction contractor Salman Zaki Kazim, was struck by shrapnel in his hip. He was shopping for a TV antenna, accompanied by his granddaughter and son-in-law, at the time of the bombing. Neither was hurt.

At the scene of the bombing, women in black chadors were sobbing outside homes where some of the victims lived. Men cried and hugged each other and participants in a funeral procession shouted the Muslim creed, "There is no God but God," as they walked through the market.

Down the road, residents gathered at a Shiite Muslim mosque, crowded around seven wooden coffins draped in blankets. Some of the men stood silently. Others sobbed into trembling hands. In the background, women cried, "Oh God! Oh God!"

Another witness, Omar Ismail, a 35-year-old engineer who witnessed the explosion, said body parts were strewn across the street.

"Why do they hate the Iraqi people so much?" he asked.

Iraqi state television, meanwhile, said three Iraqis had been arrested for spying for the United States, alleging they were assigned to inspect areas of Baghdad that had been attacked to determine if they needed to be hit again.

The report identified the men as Ibrahim Abdel Qader, Ghareeb Ahmed Hamadeh and Hussein Shahed. Qader was quoted as saying he was given about two pounds of TNT from "foreigners -- Americans," and Shahed said he was recruited by an American he identified as "Gen. Mike" who was from the CIA.

Explosions in the capital late Thursday night and early Friday were aimed at disrupting communications between Saddam Hussein's leadership and his military, U.S. officials said. Airstrikes also targeted positions of the Republican Guard -- Saddam's best-trained, best-equipped fighters -- in a ring outside the city.

The airstrikes hit at or near the Information and Planning ministries and at telephone installations -- "as if government buildings are empty of human beings and there are no civilians in them," Sahhaf said.

The attack gutted a seven-story telephone exchange building in an area called Al-Alwya.