The latest round of bombs appears to have finally cut off Iraqi access to the Internet. 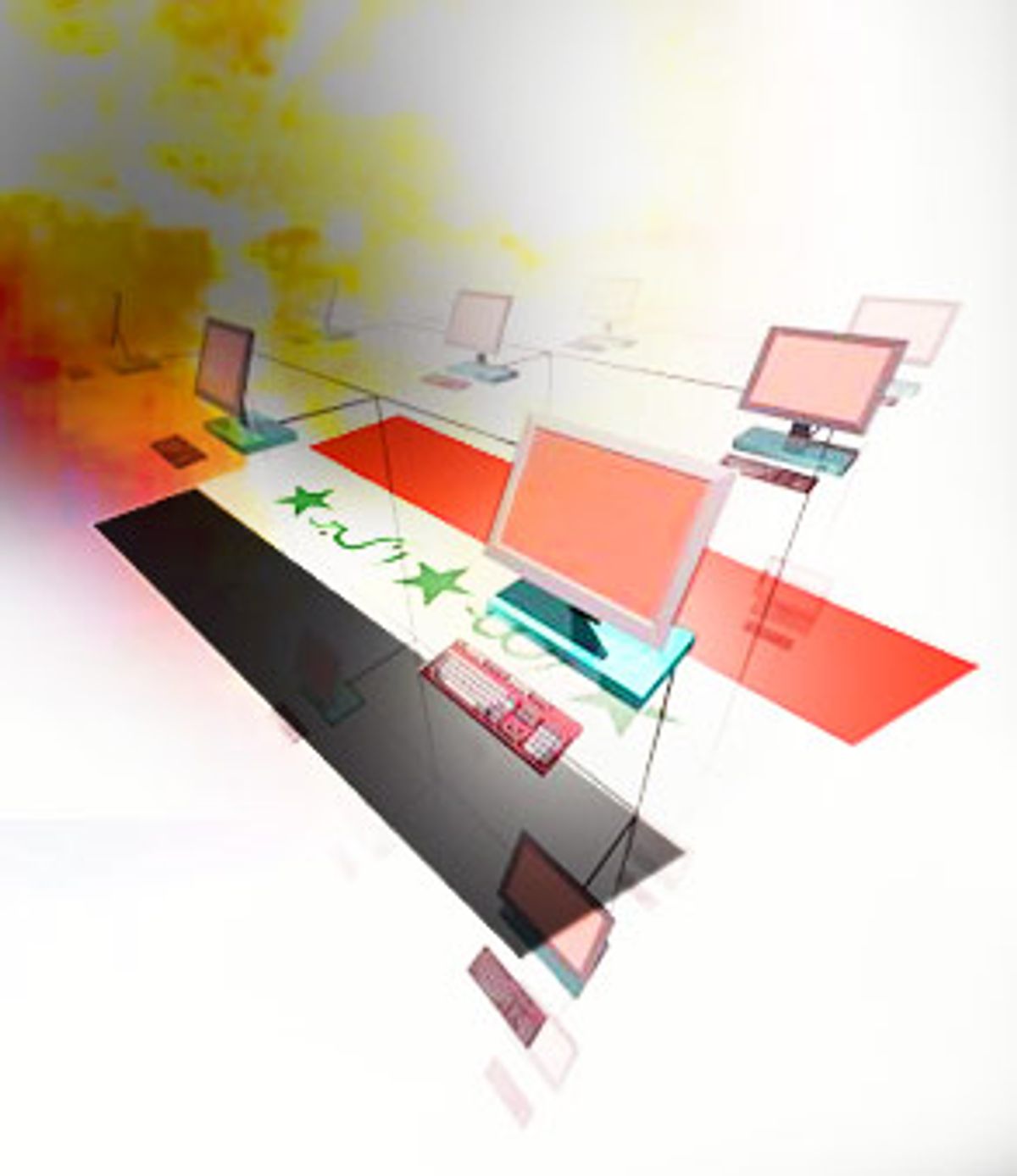 Yet Babil Online, the home page of an Iraqi newspaper run by Saddam Hussein's son Uday, was still reachable following the bombing.

A headline atop the front page of Babil Online exhorts visitors to read an article about the war, which includes several postmortem photos of what appear to be U.S. troops. The images were displayed last week on Qatar-based Al-Jazeera TV. Subsequently, the TV network's Web site came under repeated denial-of-service attacks.

Meanwhile, two primary Internet access points for Iraqi citizens -- among them a high-profile blogger using the alias "Salam Pax" -- have been unreachable since the weekend.

A Cisco switch that connected Baghdad residents to the Internet stopped responding Saturday morning, Iraq time. The device, located at Internet protocol address 62.145.94.250, served as a Web gateway for many citizens.

The headers of a March 19 e-mail message from Salam Pax, author of Where Is Raed? a popular blog chronicling life in Baghdad, showed he connected to the Internet using the switch. Pax's electronic journal has not been updated since early last week.

Also apparently affected by the recent missile strikes was a satellite gateway carrying traffic for users of Warkaa, one of Iraq's two government-controlled Internet service providers. A Web-based monitor that had previously displayed traffic statistics for Warkaa's satellite link became unreachable early Saturday. In the days just prior to the recent attacks, the monitor at times showed hundreds of Internet connections. (A screenshot of the monitor is here.)

Besides connecting Iraqis to the Web, Warkaa also provided e-mail service for many residents.

The downing of Iraq's Internet access was criticized by representatives of Voices in the Wilderness, a U.S. group campaigning to end sanctions against Iraq.

"There are Iraqis who depend on the Internet to keep in touch with family and friends outside the country. By cutting that off, you've made them even more isolated from the outside world, which will further hurt their morale," said Jeff Guntzel, one of the group's coordinators. He said Voices has been unable to communicate with a team of representatives in Baghdad by phone or e-mail since late last week.

Despite pummeling the city with thousands of sorties over the past 10 days, U.S. military planners have taken pains to avoid harming Baghdad citizens with the bombing campaign. U.S. officials have also repeatedly stated that the aim of the war is to remove the current regime from power, and not to harm Iraqi citizens.

Some observers have speculated that the United States left Iraq's Internet infrastructure untouched for the first week of the war in order to maintain communications with potential defectors in the high ranks of Iraq's government and military personnel.

But Peter W. Singer, a fellow at the Brookings Institute, said he doubted that preserving Iraq's Internet capabilities was high on the priority lists of U.S. military planners.

"Internet access is still limited mostly to elites in the country. The U.S. is mostly concerned about protecting things like water and electricity and bridges," said Singer.

With Internet access apparently cut off for Iraqis, Babil Online's value as a propaganda tool is now limited to Arabic speakers outside the country.

But Singer said the mission of Iraq's Information Ministry has been not only to fire up nationalism but also to manipulate world opinion and to raise international protests against the war.

Babil Online may have escaped the attacks because of its physical location -- the site appears to be hosted on a server not in Baghdad but in Beirut, Lebanon.

Domain registration records show Lebanese ISP TerraNet as Babil Online's host. The registrant of the domain, Alaa Sami Kadhem, is also listed as the owner of Baghdadlink.net and Warkaa.net, two domains used by the Iraqi government.

Kadhem and TerraNet's general manager, Suheil Zurub, did not respond to e-mails asking about their involvement in Iraq's Internet infrastructure.

Officials at California-based Mentat, which manufactured the satellite gateway used by Warkaa, said they were unaware that the device was being used by Iraq's government. Mentat executives said they shipped one of the company's SkyX Gateway systems to Al-Manara International in Dubai, at the request of Mentat's customer Atlanta International Teleport (AIT) of Douglasville, Ga.

While it's possible that Warkaa and Uruklink were merely "unplugged" by their satellite link providers, Robert G. Ferrell, a security analyst with the U.S. government, said it was more likely that the recent bombing was responsible for the outage.

The weekend missile barrage appears to have knocked Uruklink.net, Iraq's main government site, and its accompanying e-mail server, offline. A traffic counter contained in the code of Uruklink's home page still appeared to be registering visits this weekend. But Sean Donelan, a networking reliability expert, said the counter was likely being loaded via copies of the site temporarily cached by Google or some Internet service providers.