Why I dropped my drawers for peace. 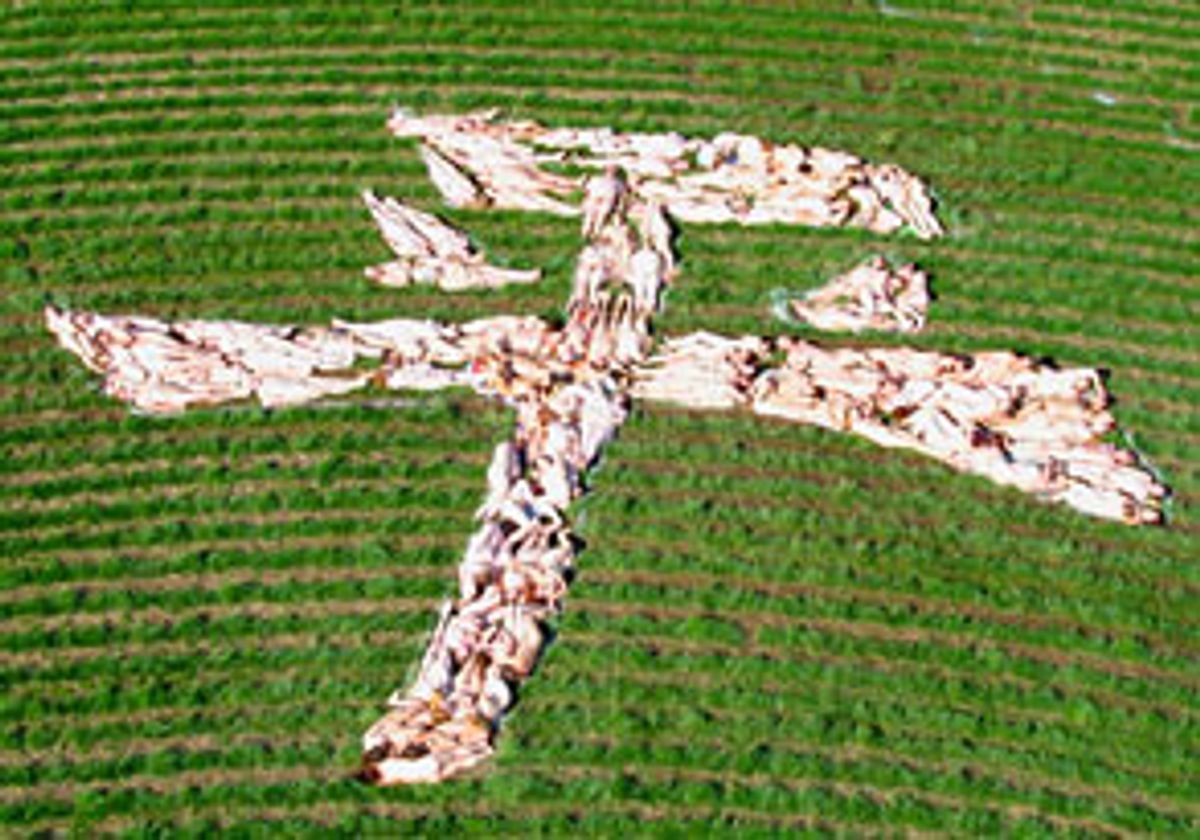 It was the first e-mail I'd gotten all day that actually caught my interest: 250 people were needed for a nude peace protest. It would take place in a rural, secluded spot, outside of Portland, Ore. The protesters would disrobe, form the Chinese symbol for peace, and a photographer would climb up into a cherry picker and take their picture from above. I wasn't really sure how nudity was going to help the peace movement, but I'd never gotten naked in front of more than two people at a time, and the idea of doing it for something I believed in seemed like a great idea.

I don't know what I expected it to be like, but I had a slightly sentimental view of the whole thing. Did I actually think that dozens of naked people were going to stop the war? No. But I did think, "Wow, we are going to make a dent in this peace movement." Turns out the only thing we made a dent in was the mud beneath our butts.

So this is what a nude protest is like: You spend the gas money to drive 30 miles in the pouring rain (of course it's pouring rain) to a spot on someone's ("I'll remain anonymous, thank you") private land. Only you realize as you pull up and hand in your permission slip (which you signed without reading, and now you're thinking, wait a minute -- why did they ask for my blood type?) that this spot may be rural, but it sure as hell isn't secluded. This was evidenced by the row of boys sitting on some pickup trucks, apparently having a tailgate party in honor of the protest. I don't know for sure which team they were rooting for, but I'm guessing it was the skins.

What were these guys hoping to see, I wonder, as we hold hands and let out some "oooommmmsss" before forming our ancient Chinese symbol? I look at the people standing in the mud with me, and well, let's just say that it's obvious, even with our clothes still on, that we're not shooting a Sports Illustrated swimsuit edition here.

After a few more oms, we head over to where someone with poor planning (or a strong sense of irony) has outlined the Chinese figure in white chalk in the muddiest section of the field. I looked up the symbol on the Internet before deciding to participate (there are some designs I just won't contort my body into), so I know that it looks like back-to-back F's with a few pen blots. But from where I am standing, all it looks like is a high school football field's 30 yard line gone awry.

As the boys wait patiently on their tailgates, we lay down in our clothes in the wet grass and mud (and try not to knock each other in the head or shoulders or hands). By the time we're in some semblance of order, any hope of keeping our clothing clean and dry has gone out the window. We're closer to each other than I've been with any of my family members in 16 years. And our conversations are much the same:

Once we disrobe and lay our clothes on a plastic tarp that is way too far away from the design, it is even more obvious that our tailgating fans are not getting superbods here -- we are mostly bellies and thighs, shriveled and puckered privates, lots and lots of hair. But our fans stick around, as we tussle back into place, trying to keep our asses out of the mud, with the photographer yelling directions from atop his cherry picker. Things like, "There's a hole over there!" (which seems obvious) and "That woman's ass is breaking up the straight line of the design -- have her move in some" (which I think was directed at me).

As we shove and shiver, spoon and giggle, I have to wonder if the boys can actually see our symbol of peace from where they are. Or are they just scanning the crowd for a nice boob, a curvy ass, a perky nipple (and they are all perky by this point). Are we fodder for their fantasies? Or, more likely, a story to tell tonight with friends, as they laugh about our folds of fat and droopy skin?

At one point, just as we are getting settled into place and the photographer has stopped yelling at my butt, a crowd of neighbors (calling themselves "Bikers and Rednecks for Bush") forms beneath the cherry picker. They are closer than the tailgaters, and much more aggressive, whistling and jawing at us. There is a rustle through the symbol as people get nervous, wondering aloud what the bikers and rednecks are doing here, whether someone should call the police. The woman next to me yells, "Is someone guarding our clothes?" and someone else asks, "Is that a video camera?" in a way that would make me run away screaming, except for the fact that I would then be running away screaming. Naked.

But then the photographer yells, "Lay down!" "Be still!" and so we did. After a few minutes, he yells, "OK, you're done!" and we whoop and holler, then rise and attempt to slide our muddy, wet, shivering bodies back into pants and skirts and shirts.

The pickup party stays through the entire thing, even this ragtag ordeal of "Where are my shoes?" and "I knew I shouldn't have worn pantyhose!" Then, when the last participant is dressed, the boys throw up their tailgates, get back into their trucks and drive on down the road.

But the neighbors beneath the cherry picker stay. It is hard to tell their intentions, beneath their hats and beards, and as I walk by them to my car, I try not to think, "Run!" or "Oh no, what if they have my license plate?" or "What was the theme song to 'Deliverance'?" But as I drive out, one of them is smiling and directing traffic for us with his baseball cap, and just for a second, I think I see a flicker of respect in his eye.

Or maybe it's just a lasting reflection off my wet, bare skin.

Shanna Germain is a freelance writer and photographer and the Editor-in-Chief of Nervy Girl Magazine.