"Why is my country turning against me?"

At an emotional Fort Dix support group, families of soldiers wonder why the country isn't unified behind them. 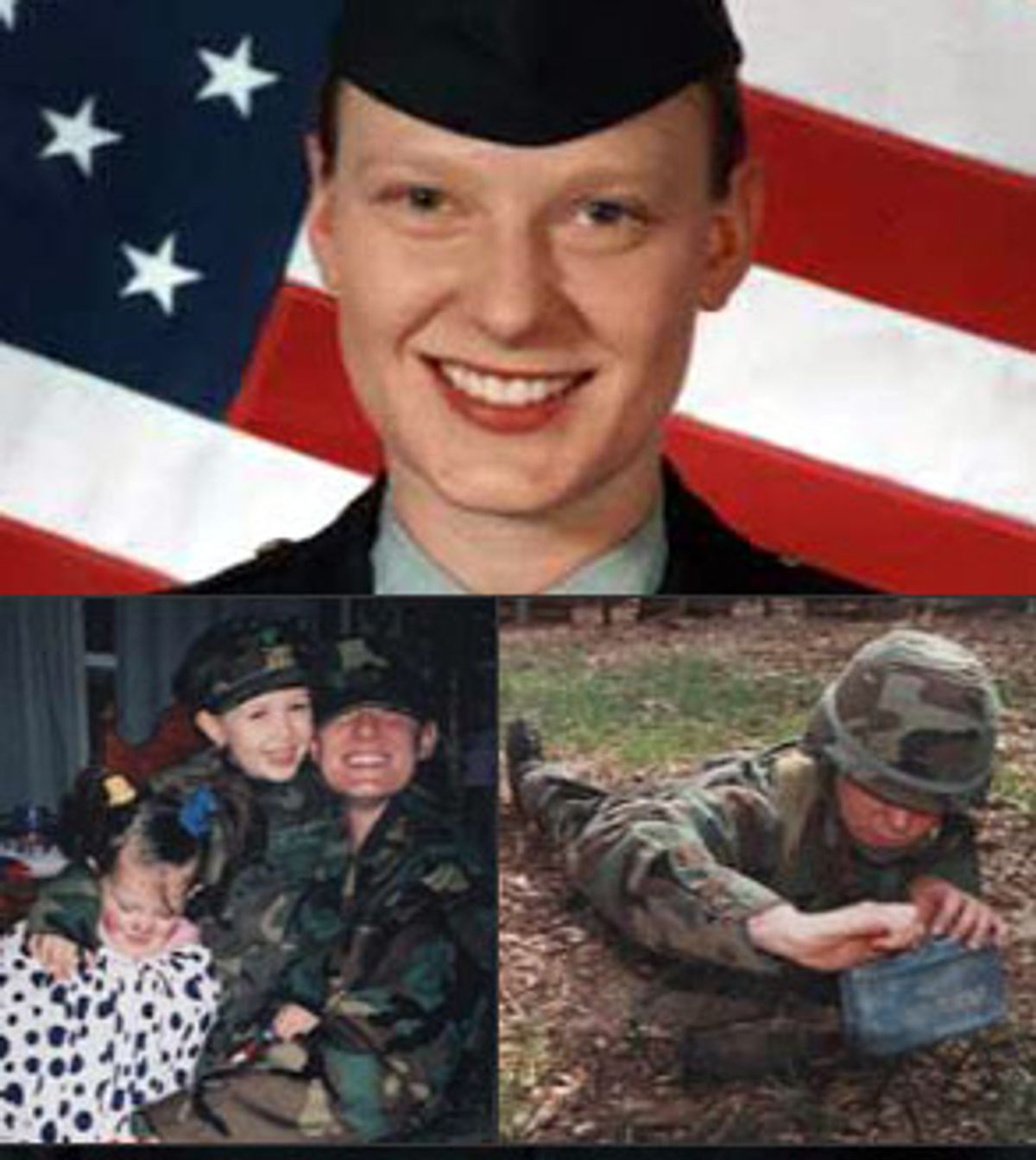 Army Sgt. Heather Marie Wright has always had a fierce patriotism for her country, from the American flag T-shirts, purse and belt buckle hanging in her closet right down to her insistence on sleeping only on made-in-the-USA sheets. Earlier this month, dressed in her Army battle dress uniform, Wright, 25, served as her niece's kindergarten show-and-tell project. Last week, for good luck wearing the same dog tags her grandfather wore in Korea, she shipped out to Kuwait.

"'Re's probably crapping a brick right now, but she's got her game face on and she's ready to go," her sister, Debra Husted, says proudly. "She's tough as nails and this is what she was meant to do."

Husted, whose ponytail, jean jacket and sneakers make her look more like a high school student than a 28-year-old mother of two, says her daughters are acutely aware their aunt is gone. Whenever Shawnna, her 3-year-old who's hard of hearing, spots a yellow ribbon on a house or business near their home in Warminster, Pa., she pounds her chest with both fists -- sign language for "soldier."

"It upsets both Shawnna and Kayla terribly, not to know where their Aunt 'Re is," Hulsted says. "It kills me, too, to see my baby sister going off to war. But 'Re told me before she left, 'Don't worry. I'm making the world a better place for you.'"

She only wishes the world -- or at least America -- felt the same way.

Heather Marie's mother, Sandra Wright, says her daughter is astonished by the antiwar protests taking place across the country. In fact, members of her unit were so troubled by recent media coverage that their commander began restricting how much television they could watch. "Why is my country turning against me?" Heather Marie recently asked her mother over the phone.

I tell her there's rallies for the military, too," Sandra says. "She says, 'That's not what they're showing on TV.'"

"It messes with their heads," says Husted. "'Re thinks, I signed my life away to defend these people, and this is how they feel?"

Husted and the Wrights' reactions to the war -- pride, fear and a confused anger at what they perceive as a dearth of national support -- are par for the course for soldiers' family members, if the Hearts Apart support group at Fort Dix, N.J., is any indication. The largest training and mobilization center in the Northeastern U.S., Fort Dix has deployed 17,000 troops for the "global war on terrorism" since the twin towers fell on Sept. 11, 2001. That's twice as many soldiers as were deployed for Desert Storm, and it's not over yet; 6,000 more troops are on the ground now, awaiting their orders.

Hearts Apart is a chance for troops' loved ones to come together and share practical advice -- Do e-mails or snail mail have a better chance of getting through? How do you explain the concept of war to young children? -- as well as the intense emotions they feel about being left behind in what some feel is an unsupportive, sometimes even antagonistic, climate.

Although Fort Dix's group has met on alternate Tuesday mornings for over two years, the meeting on March 25 was the first one since the war in Iraq officially started. Nearly 20 family members -- twice as many as usual, and hailing from as far away as Philadelphia and the Bronx -- gather around a table in a nondescript conference room in the base's Community Service building.

Coffee brews on a countertop, next to a stack of shiny Deployment Guide magazines, but people are more interested in the box of tissues being passed around. Nearly everyone is tearing up, or looking down into their laps, trying not to cry. Several people clutch photos of their loved ones, proudly dressed in military uniforms. The circumference of the room is swarming with newspaper and television reporters, cameramen and photographers, waiting to record their grief. In fact, the gaggle of media is so dense that when several family members arrive late, they're unable to get through the door.

The meeting starts with one mother offering to talk about how scared she is about her son, stationed somewhere in the Iraqi desert. As she begins to sob uncontrollably, a television news reporter maneuvers quickly to her side and grips her shoulder in sympathy -- then leans forward to put his microphone a bit closer to her mouth.

Hearts Apart outreach supervisor Amanda Espinoza, a petite woman with curly black hair and watchful, worried eyes, encourages members to talk about what they're going through. She moves quickly around the hexagon-shaped table, squeezing shoulders in empathy, patting hands, speaking rapid-fire Spanish to one man who has driven all the way from New York to spend time with fellow parents, but cannot speak English.

Linda Johnson, a 40-something woman in faded jeans and Birkenstocks, admits she thought her son, Troy, would be relatively safe since he was driving fueling trucks behind the front lines and not engaging in combat. Then, on March 23, she saw TV footage of the Fort Bliss, Texas-based maintenance company who'd taken a wrong turn into an Iraqi ambush and ended up prisoners of war. "My fear for any of the soldiers, not just my son ... is that they will be captured and treated horribly," Johnson says, in between sobs. "I can't fathom that happening to my son. It's more than I can bear."

Since Troy, a 24-year-old Army Specialist, shipped out to Kuwait in December, he's been regularly calling his family back in Hamilton, N.J., good-naturedly complaining about the fierce sandstorms that forced his unit to sleep in their trucks and worriedly checking on Melanie, his girlfriend, who is four months pregnant. Last week, Johnson says, Troy called to say his cellphone was being confiscated, indicating he was moving into more dangerous territory. Between now and November, when Troy's tour of duty is officially over, Johnson worries anything could happen to the son she affectionately calls "the gentle giant" because of his imposing size, shaved head and surprisingly sweet demeanor.

"I told my son, 'Please. I know you think you're ready for this war and you know how to shoot a gun, but mentally, you have no idea how [the Iraqis] think.' They don't care about human life. I worry that this will turn into a guerrilla war, and Troy will have to do terrible things."

"It's a pet peeve of mine. You ask these people, 'What would you do differently?' and none of them have an answer," she says. "I'm from the Vietnam era. I don't necessarily believe in war. Many soldiers and their families don't necessarily believe this war is right," Johnson adds, reaching for more tissues. "However, at this point, our soldiers feel they're protecting our country from terrorists. And that they eventually will bring freedom to the Iraqi people. We have to support them and say prayers for them."

Denise Raney, who resembles a smaller Angela Bassett, drove nearly two hours from Hillside, N.J., to attend the Hearts Apart meeting with her 15-year-old son, Justin. Her eldest son, 22-year-old Phillip, is an M.P. in the Army and was sent to Kuwait last week, just two weeks after returning from a mission in Kosovo.

The last she heard from Phillip was a phone message on March 23, saying only, "Mom, I'm fine. I'm here." But Raney isn't sure where "here" is. Her eyes well up at the possibilities.

Aside from dealing with a lack of information about her son's whereabouts and well-being, Raney, too, is pained by what she sees as a lack of support for troops here at home. "We're facing so much negativity," she says. "The media covers antiwar protesters, but not how many people support the troops and how much we love them. Once the president declares war, we have to get behind our troops. They're over there giving their lives."

Justin, a high school sophomore, has been involved with ROTC for the past two years and is already planning to join the military after he graduates. He blushes and shrugs when asked if his older brother's proud of him for following in his footsteps. "I just want him to be safe, be smart with his actions, and hurry up home soon," he says softly.

Army Sgt. 1st class Tim Jayne has been gone since December, leaving his wife, Denise, alone with their three small daughters, ages 7, 4 and 22 months. "He didn't want to leave, but this is what he trained for," Jayne says.

She last spoke to her husband four weeks ago, when he was able to call for several minutes from an undisclosed location in the Kuwaiti desert. The good phone connection made Tim sound like he was just next door, which, Jayne says, made the conversation that much more painful. "He seemed OK, but he protects me from the truth. He'll always say things are fine."

While Jayne is putting together a care package of things her husband is craving -- everything from eyedrops to cinnamon Pop-Tarts -- she says she still feels "totally hopeless."

"My daughters dream about [their father] all the time and think he's still here," she says. "When they realize he's not, they wake up crying. We're always crying."

Jayne says she doesn't have a problem with people protesting the war -- so long as they support the troops. Like others at the meeting, she says it's hard to find sympathy for what she's feeling.

"I don't have a lot of people in my community," she says. "I don't have anyone, actually, to talk to. It's nice to be able to come here and be around people who really understand what you're going through."

Lt. Col. Paul Womack, an Army chaplain sitting in on the meeting, nods at Jayne and tries to be reassuring. "I wish we had a magic wand and could fix everything," he sighs. "But we can't just take this away. We have to live through the experience."

Debra Husted says her family is trying to "suck it up" and be strong about her sister going off to Iraq. Hopefully, history will be on their side: Four generations of her family have fought in wars, and all have safely returned home. "'Re is the first female in our family to go," Husted says confidently, "and she'll come home, too."

In a way, the antiwar sentiment at home has strengthened 'Re's commitment to her country. In her most recent letter home, she wrote, "I feel [serving in the Army] is my way of expressing my love for everyone: from friends and family to the people I stand next to in line for coffee. I raised my right hand to give my life for every person I have ever known and for every person I will never meet."

Whether or not she gets appreciation from U.S. citizens upon returning home, 'Re will certainly be greeted as a hero by one group of die-hard supporters.

"Kayla's kindergarten class loves 'Re," says Husted. "All the kids want to be soldiers now."

Stephanie Booth is a freelance writer who lives in New Jersey.