Dean, McAuliffe and the DNC wine and dine the party faithful in New York, pretending affirmative action, abortion and ethanol are really what's on their minds. 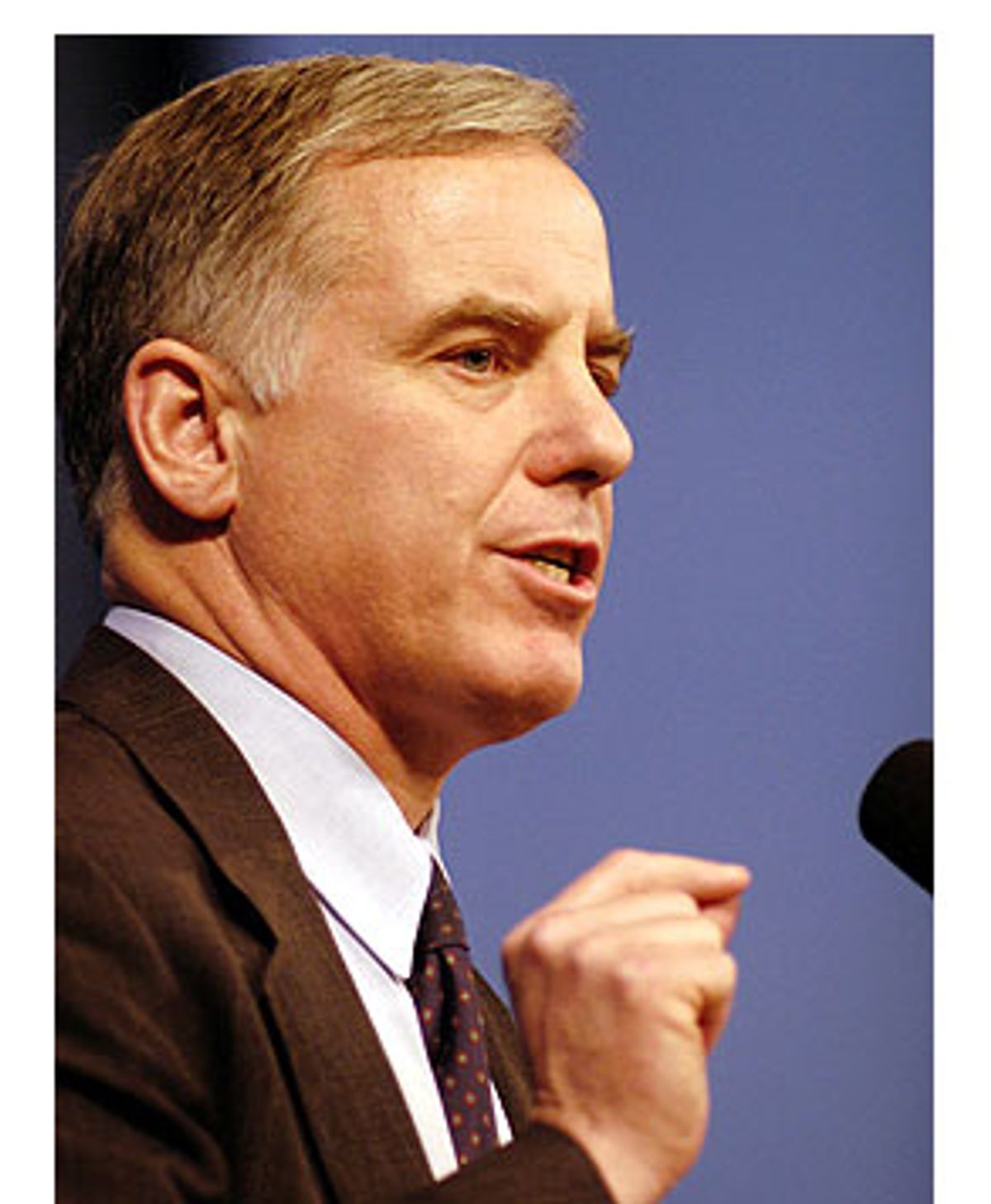 On Tuesday evening the most credible antiwar presidential candidate came into a crowd of wealthy liberals on the Upper West Side of Manhattan -- "ground zero of antiwar sentiment," as described by Judith Hope, a former New York state Democratic Party chair -- and he hardly mentioned the war at all.

"Nobody asked me about it," explained Dr. Howard Dean, the feisty former governor of Vermont, when asked about his reticence.

But surely Dean -- who has distinguished himself from his better-financed and better-known primary opponents largely because of his spirited opposition to the Bush administration's foreign policy in Iraq -- typically mentions Topic A at his campaign appearances?

"I said I was going to tone down my criticism of the president once the war began," Dean explained as he made his way from a Democratic National Committee fundraiser at the posh Sambuca restaurant to a private fundraiser for his presidential campaign. "I'm not gonna change my policy. I support the troops but I haven't changed my views on the policy."

Wearing a blue pinstripe suit, with a CBS Evening News crew clip-on microphone adjacent to an American flag lapel pin, Dean was then asked if the presumably antiwar crowd wouldn't enjoy hearing from a credible Democratic candidate who -- unlike his war-supporting Democratic rivals Sen. Joe Lieberman of Connecticut and Rep. Dick Gephardt of Missouri, or somewhat more nuanced, less gung-ho supporters like Sens. John Kerry of Massachusetts and John Edwards of North Carolina -- had carved out a firm antiwar stance? Dean politely disagreed.

"Most of the people I know who are against the war don't want to talk about it anymore," Dean said. "They're too depressed and discouraged."

Another reporter then asked Dean if he was merely muffling his opposition to "Operation Iraqi Freedom" because President Bush enjoyed skyrocketing approval ratings, as did his war. He looked incredulous. "With these guys?" he asked, motioning back toward the room of moneyed, middle-aged matrons.

Dean was in the middle of a whirlwind week, including visits with the influential American-Israel Public Affairs Committee, the Building and Construction Trades Department's National Legislative Conference, and the Children's Defense Fund in Washington, a Democratic dinner in Atlanta, and a slew of fundraisers from New Rochelle and Bedford, N.Y., to Greenville, S.C., and on to Palm Beach and Miami, Fla. His Upper West Side appearances at two fundraisers for the DNC's Women's Leadership Forum -- one at Sambuca, and a more exclusive one across the street at the fabled Dakota -- were just dots on his itinerary.

Yet it seemed illustrative of the Democratic condition that Dean of all people would demur on the subject of the war -- and that the activist crowd would let him. Whether they're just looking forward to November 2004 when (hopefully) the war in Iraq will have come to a satisfactory conclusion -- or whether they are, as Dr. Dean characterized them, "depressed and discouraged" -- this is an odd time for Democrats.

It certainly doesn't recall the candidates of yore -- Sen. Gene McCarthy, D-Minn., whose opposition to the Vietnam War in 1968 propelled him to a near-defeat of incumbent President Lyndon Johnson in the New Hampshire primary; or Sen. George McGovern, D-S.D., whose grass-roots 1972 antiwar campaign actually garnered him the nomination. Which may, of course, be the point. After all, we don't talk much about McGovern anymore.

The flickering lanterns hanging from 1 West 72nd Street teasingly beckon. But the "pre-reception" fundraiser at the Dakota manse of Matt Mallow and Ellen Chesler -- two of the donors-cum-"longtime friends" who enjoyed overnight stays at the Clinton White House -- was closed to all but those 30 members of the WLC willing to pony up $5,000.

While this reporter huddles outside waiting for the Dean staffer who, he was erroneously promised, would escort him into the affair, DNC chairman Terry McAuliffe swaggers past the Dakota sentry and up to the DNC staffers. The convivial, congenital back-slapper is staggered at the news he's just heard. The first quarter of fund-raising for the declared presidential candidates has ended as of March 31. Reports aren't due at the Federal Election Commission until April 15, but now's the time for campaigns to whip it out and disclose how much money they've raised since the first of the year.

"Edwards raised seven-point-four million," McAuliffe says. He's amazed, he says, not only that Edwards has apparently beaten sort-of frontrunner Kerry in fundraising, "but that they kept it so quiet!" Dean's campaign says that he'll have raised about $1.5 million. None of the others have come to the table.

Shifting gears, McAuliffe calls Dean "great for our party," and labels him exciting, claiming he is bringing new voters into the Democrats tent. He then bids adieu and heads inside.

With late word that no media riffraff will be permitted a gaze into the Chesler-Mallow chateau, I cross the street to Sambuca. It wasn't originally on the schedule, McAuliffe says, but the response to word of Dean's appearance has been so overwhelming they needed to find space to accommodate 90 people for the larger event. The CBS crew sets up their lights. Servers pour glasses of Pinot Grigiot and Cabernet. Guests spill in.

"I went to a preview last night," an older woman says to another, younger attendee. "'Phonebooth.' Colin Farrell was there. He brought his whole mishpacha from Dublin -- his cousins, his aunts ..."

The conversation soon turns to a different sort of violent image. "Are you pro-war?" the older woman asks.

"I'm not against the war," says the younger. "I'm in favor of undermining Saddam Hussein."

"No one disagrees with that," snaps the older woman. "But look, do you believe in the Constitution?"

It goes on from there. The room fills. McAuliffe is besieged by a woman concerned that Bush's religiosity is guiding him into a battle of civilizations. The word "apocalypse" can be overheard as McAuliffe gazes at her politely.

Dean comes in. He makes small talk. Some about the war. Some of it not. "So you're a broker?" he's heard saying. The hors d'oeuvre trays come out, and the smell of Swedish meatballs wafts through the room.

Susan Turnbull, national chair of the WLF, tells reporters that Dean didn't talk much about the war across the street at the Chesler/Mallow abode. He was asked about affirmative action, abortion and judges, she recalls. Uncommitted to any candidate, Turnball says that Dean's essentially antiwar stance "is going to play differently in different communities. Obviously in New York you see a lot of people who are supportive of his message."

She emphasizes that everyone supports our troops.

Judith Hope appears. She endorsed Dean today, despite being under "a lot of pressure" to go with other candidates. "I just could not do it, because I feel so strongly that Howard's the real thing. And that comes so rarely in American politics."

That characterization would probably be disputed by at least one of Dean's rivals. At a California Democratic convention on March 15, Dean accused Kerry and Edwards of supporting the war and pretending before Democratic crowds that they hadn't. Hours before, however, Edwards had been booed for asserting "that Saddam Hussein is a serious threat, and I believe he must be disarmed including the use of military force if necessary." On the floor of the Senate a few days later, a Boston Globe reporter overheard Edwards complaining to Kerry that Dean "got up there and lied." In a private letter, Dean apologized to Edwards, specifying that Edwards had in fact been honest before the California convention, but in an interview with the Des Moines Register, continued the criticism generally, saying that "it seems to me he has changed his position."

The room is called to order. After Turnball and WLF New York co-chair Jodi Schwartz call for "regime change" in the U.S., McAuliffe takes the stage and discusses how great things are for the Democrats -- the DNC is out of debt, they purged the millions of incorrect voter addresses from DNC computers, there are five more Democratic governors than two years ago, were it not for the untimely deaths of Sens. Mel Carnahan, D-Mo., and Paul Wellstone, D-Minn., the Senate would be theirs. The war goes essentially unmentioned.

McAuliffe does call the campaign to defeat Bush "a crusade that we're all on," a jarring comment to make, not only because it was made in a room full of Democrats gearing up to buy matzah.

McAuliffe, pleading neutrality, allows himself to call Dean "a spectacular individual who's brought energy, enthusiasm, and excitement to this party." He recalls Dean's appearance at February's DNC winter convention where Dean "lit up that crowd" by "talking about what we fight for as Democrats." (That speech, of course, began with Dean pointedly asking, "What I want to know is why in the world the Democratic Party leadership is supporting the president's unilateral attack on Iraq?")

Dean makes no similar inquiries this evening. His one allusion to the war is to slam a Bush administration move to cut veterans' health benefits. "Most Americans would prefer making sure our folks who are fighting are treated properly when they come home!" he says. He says he wants to bring in a foreign policy that makes "Americans walking down the street proud to be Americans again." But he focuses on domestic issues -- a balanced budget, universal health insurance, abortion, fully funding special education, correcting the rightward tilt of the U.S. Supreme Court.

He sends a shout-out to Hope. Since this is a DNC event and the DNC doesn't take a position on candidates before it has an official nominee, Lenore Blitz, a member of the Kerry for President finance committee, tells me that she finds this inappropriate. Blitz won't tell me how much Kerry has raised other than "we've done very well; we're going to be very competitive."

The Middle East comes up once -- but not Iraq. A woman says that Bush has been extremely supportive of Israel and wants to know Dean's position.

"I don't think the president has been very supportive of Israel," the former governor says. "If you want to be supportive of Israel you need peace in the Middle East." He says Bush is the first president in generations not engaged in the struggle to bring peace between Israel and the Palestinian territories. He goes on to slam Bush's mollycoddling of the Saudis' funding of madrassas and terrorist groups like Hamas. A new item on Dean's call for the president to develop an energy policy -- he now talks up ethanol, the controversial gasoline substitute beloved mostly by business leaders in that key primary state of Iowa.

Dean continues, straining to raise his voice above the cacophony of a raucous party in the back room. Hope dramatically whispers to an older woman: "He can win. He can win. Trust me."