As the U.S. hunts for germ weapons in Iraq, world health officials scramble to stop a fatal mystery disease that spreads like the common cold. 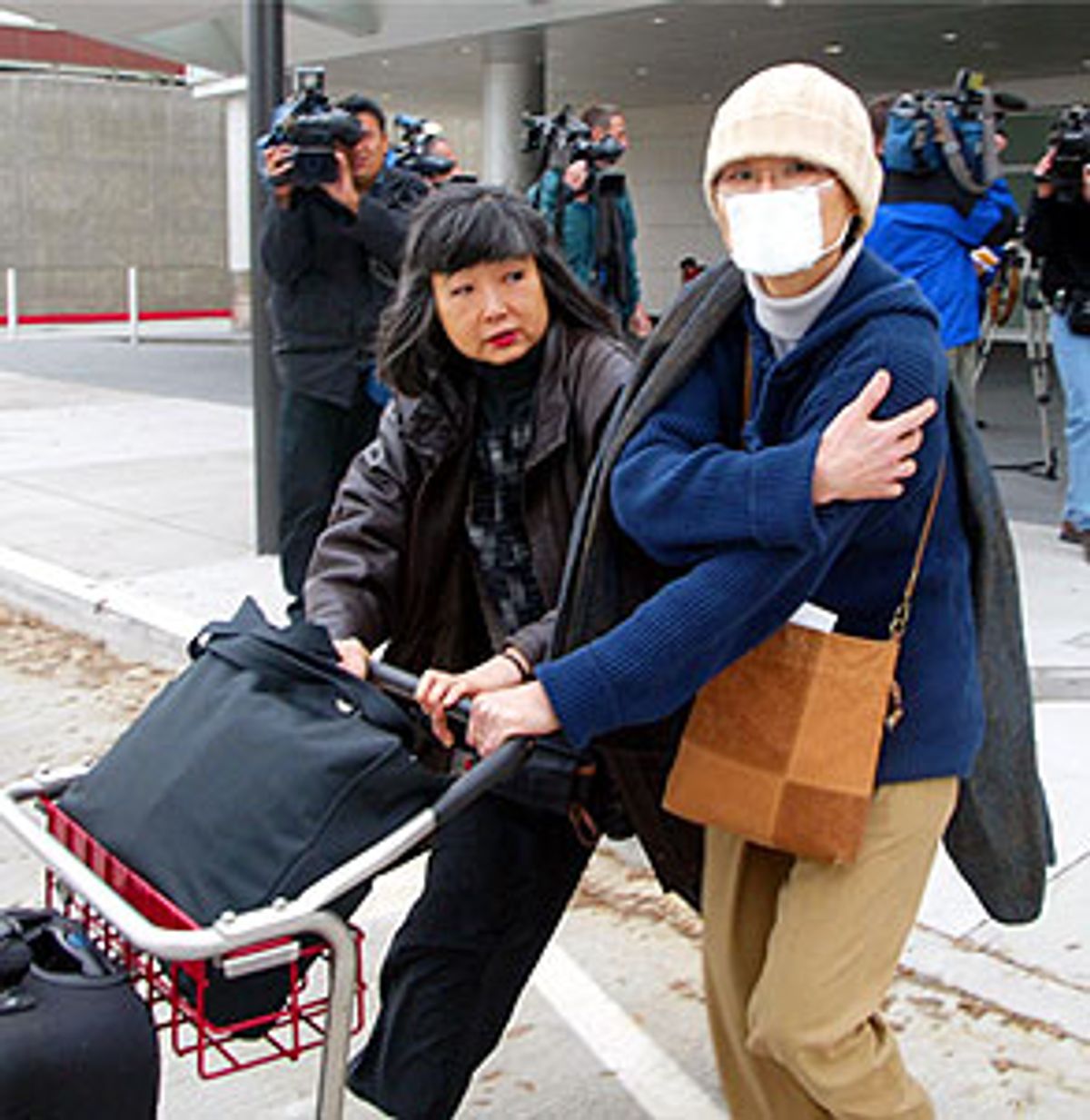 Ever since AIDS began its terrifying spread, scientists who track emerging infections have been warning about the potential for another global outbreak, something that might resemble the Great Influenza Pandemic of 1918, which ultimately killed 50 million people. The latest news of quarantines and deaths due to a highly contagious mystery virus -- from Hong Kong, China, and Vietnam, as well as Canada and the United States -- could be a frightening picture of the start of such a natural disaster. As the U.S. government hunts for germ weapons in Iraq, while urging American doctors to vaccinate 10 million people against the long-vanquished smallpox virus on the tiny chance that terrorists might get hold of it, U.S. public health officials have been working hard with their colleagues abroad to get a handle on severe acute respiratory syndrome, or SARS.

Nature, in all its whimsy, has thrown us a big, fat, ugly curve -- a virus with a harmless background that suddenly turned lethal.

In Hong Kong this week, hundreds of contaminated people were rounded up and bused to quarantine camps. In Singapore, schools were closed and nurses were posted at the airport to ferret out sickly-looking arrivals. In Toronto, two hospitals stopped their admissions to avoid spreading the disease. And in San Jose, Calif, an American Airlines flight from Tokyo was held on the ground until five crew members and passengers reporting SARS symptoms could be removed to a hospital and everyone else on the plane could be briefed about how to monitor themselves for signs of the illness. Those hospitalized were later declared disease-free. But clearly the newly identified disease is raising the public's anxiety level.

One virologist, who wished to remain anonymous, described the potential, in a worst-case scenario, for "total panic."

Researchers scrambling to identify the cause of SARS believe it may result from the genetic mixture of two strains of a previously innocuous organism called the coronavirus, or possibly of a coronavirus and another bug. This chance recombination might have occurred inside a mouse, a chicken or a pig before the virus jumped to humans.

Human coronavirus infections -- responsible for about a quarter of all common colds -- are usually so mild that no one has ever tried to make a vaccine to prevent them or a drug to treat them. That's no one's fault, considering the seemingly limited threat posed by the infections, but it puts the world at a disadvantage. While intensive care can keep most SARS patients alive, there are no drugs designed to combat the infection.

"In terms of antivirals and vaccines, we are way behind," says Ken McIntosh, a Harvard microbiologist who helped discover coronaviruses back in 1965. Like other virologists, he is not necessarily surprised by the evidence that this virus family has given birth to a killer; coronaviruses mutate easily, and are notoriously free and easy with their genetic material.

"I always thought something like this would happen. It was just a matter of time," says Pierre Talbot, a coronavirus expert and chief of the Armand-Frappier Institute, a public health research center at University of Quebec.

But hypotheticals do not translate into research grants, and Talbot's lab is one of only a handful in the world working with coronavirus. "It's not HIV," he says. "It's not a very popular field."

"No one thought [coronaviruses] were very important," adds Stan Perlman, a virologist at the University of Iowa.

Until now, of course.

So far, SARS has infected more than 1,800 people in 13 countries, killing 62 of them, in the past few months. Most of the infections have hit middle-aged to elderly people, though in one reported case, the virus was identified in a 1-year-old child adopted from China and brought to Massachusetts. The initial symptoms -- fever, chills, dry cough -- are like common upper respiratory ailments, but this bug is capable of overwhelming the immune system. About 10 percent of SARS infections lead to severe breathlessness, oxygen depletion and organ failure, and about a third of the severe cases die -- particularly old patients and those with existing medical problems.

Up to now, SARS has had a fatality rate of about 3.5 percent. If that sounds mild compared, say, to the virus that causes AIDS, consider this: The pandemic flu of 1918 killed "only" about 2.5 percent of those whom it infected. That amounted to 50 million people worldwide.

SARS is not the first scary microbe to emerge in the era of globalization, but it could be the one most likely to spread. Ebola killed its hosts too quickly to get out of Africa. Hantavirus and Nipah, which hopped from mice and bats, respectively, were plenty deadly, but did not spread person to person. Only mosquitoes (and blood transfusions, it turns out) transmit West Nile. The difference with SARS is that you can get it from someone coughing in your elevator.

Public health officials are still a bit uncertain as to just how contagious SARS is. Most cases seem to spread to close relatives or healthcare workers heavily exposed to virus-containing droplets from coughing and bodily fluids. But there have been a few breakout cases -- spread on hotel floors, airplanes and apartment buildings, for example -- that don't fit the pattern.

There appears to be a subset of "superinfectors" whose coughs produce aerosolized viral balloons that can float in the air for hours. Using the example of one Hong Kong apartment complex where more than 200 people were infected with the disease, World Health Organization officials speculated -- without offering any evidence -- that the virus occasionally spread through sewage.

The appearance of a highly contagious coronavirus would not surprise Pierre Talbot. In research conducted at a neonatal clinic in Brittany, Talbot found traces of one human coronavirus on aluminum table tops and sterile latex gloves up to three hours after patients left a room. "It survives in the environment quite easily," he says. "People are going to have to be very prudent with this virus."

Added Larry Anderson, who is running the CDC lab investigation of SARS, "This is the first new virus infection associated with such serious disease which is transmitted, we suspect, by respiratory droplets. I think it will be difficult to control the spread of SARS."

Even though SARS, a virus thought to have been brewed in nature's cauldron on a farm in southern China, has the potential to create global panic, it is possible that the epidemic could burn out in a month and never seriously threaten us again. Viruses sometimes pass through a few hosts, mutate and lose their juice, notes Kathryn Holmes, a coronavirus expert at the University of Colorado. "If it's new to the human population," she says, "it's impossible to predict."

Up to now, U.S. authorities have been effective and probably fortunate in controlling the spread of SARS. Except for a handful of close relatives and health workers, the 69 known suspected SARS patients here were all sickened in Asia. By keeping them off the streets, U.S. officials have prevented community outbreaks so far. The same is largely true of Vietnam and Singapore.

But that is not the case in Hong Kong, where officials have dusted off a colonial-era law to place as many as 1,000 people in two vacation camps requisitioned for quarantine. About 240 residents of the Amoy Gardens Apartment were being moved to the camps Tuesday night. Their 33-story building was sealed off to keep them from spreading the infection, which has killed 16 people in Hong Kong, but hundreds managed to flee the building when they heard about the impending quarantine. The handling of the Amoy outbreak, and the rapid spread of the disease in Hong Kong, has led to criticism of that government's handling of the epidemic.

In Canada, with over 100 suspected cases, the fear is palpable. "This is a big deal," says Donald Low, chief of microbiology at Toronto's Mount Sinai Hospital. "It's not just an Ontario problem, but a Canadian problem, a North American problem."

Meanwhile, the World Health Organization says Chinese officials haven't allowed its investigators into Guangdong province to find clues about the disease's origin or determine whether the epidemic is still burning there. WHO officials believe it is. Nonetheless, scientists expect to have the genetic sequence of the coronavirus in a week or so, which may help them to find drugs to treat it, and may enable them to figure out where it came from.

In the past, virulent new flu strains have arisen in Southern China. It seems to be particularly good at breeding new viruses, possibly because peasants there live close to their animals, and many shoppers choose their poultry from the cage to pluck and kill it themselves. Bedding down with swine and handling live fowl are both good ways to expose oneself to species-jumping viruses.

But just as viruses can become more lethal by jumping from host to host, they can also lose their power over time. For example, bad flu bugs rarely last more than one season.

Three decades ago, during the war in Southeast Asia, a physician named Richard Wenzel surveyed antibodies in the blood of Marine recruits training at Camp Lejeune, in North Carolina, to determine what types of germs were passed around the densely populated barracks.

In 1971, Wenzel found, more than half the recruits showed evidence of coronavirus infection. The 1970 and 1972 recruits, however, had hardly any coronavirus. For Wenzel, this suggests that perhaps "an epidemic one year doesn't mean it's going to be an annual event."

But that may be wishful thinking.

With a different war being fought, this time in a country reported to have biological weapons, President Bush has asked the nation's doctors to vaccinate up to 10 million people against smallpox, a viral disease that was eradicated 25 years ago but which "evildoers," it is hypothesized, may possess.

Many have refused to answer the call, and this week 10 states suspended the smallpox shot because of safety concerns about it. Wenzel, now chief of internal medicine at the Medical College of Virginia Hospital in Richmond, has been among the smallpox program's most outspoken critics.

The SARS threat, which could end up requiring considerable vigilance and resources, bears out what many state and local health officials said about the smallpox vaccine program: that it was a waste of their precious time and energy.

"I'm more worried about smallpox vaccine than I am about smallpox currently," says Wenzel. Meanwhile, his hospital is treating its first possible SARS patient.