The Madonna video you can't see on MTV

A bootleg copy of her bomb-throwing "American Life" video proves provocative -- but not nearly as disturbing as her decision to yank it. 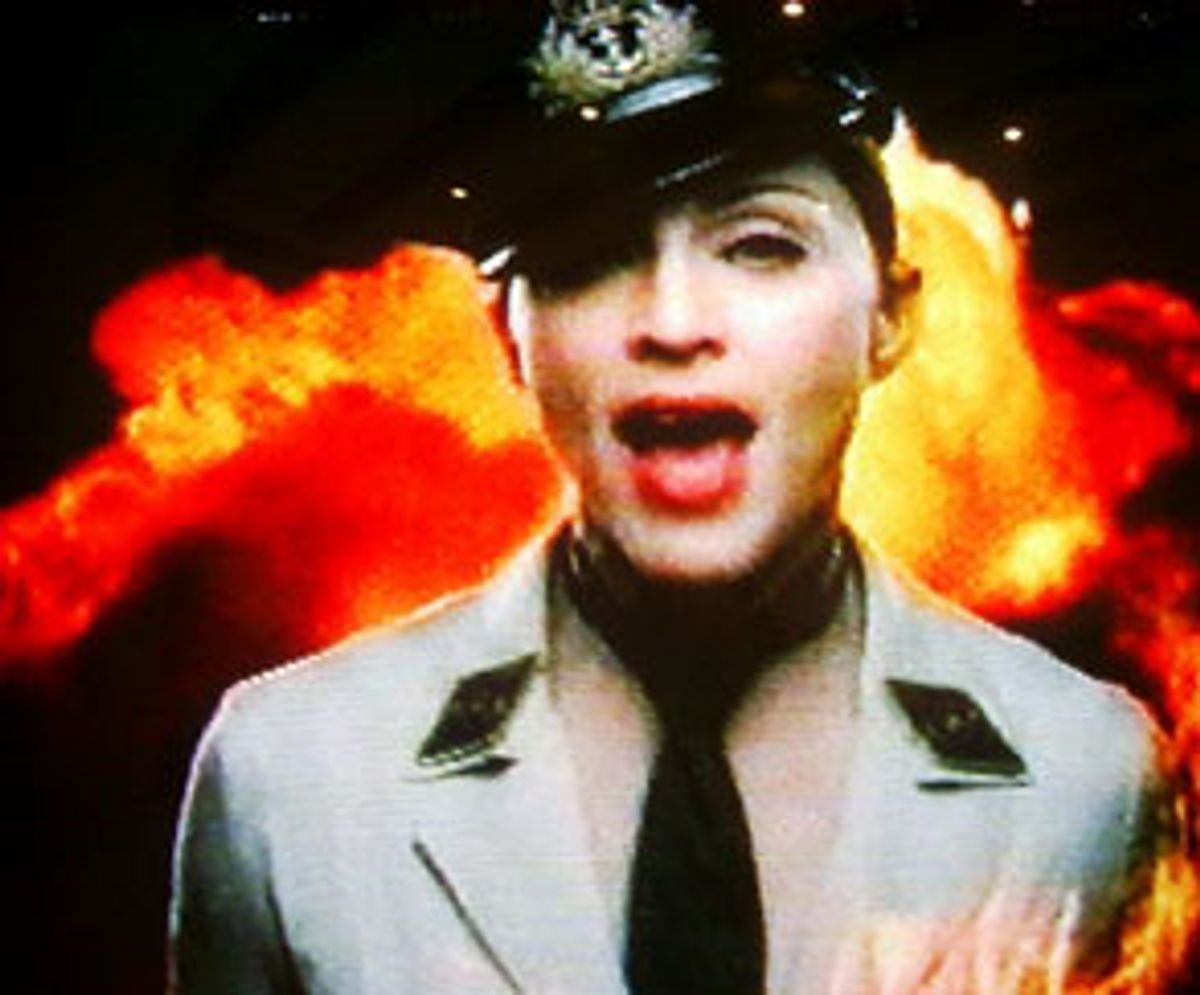 It is impossible for man to look straight at the present, he is so terrified by it. We stand on the stern of the ship looking at the wake and saying, "We're in very troubled waters." -- Marshall McLuhan

After almost a decade of throwing back Baja stuffed shrimp platters and 32-ounce margaritas, while we debated whether Britney wore the medium or the super-sized boobs in her latest Pepsi commercial, times have finally changed. The mood has shifted and suddenly it's much more difficult to enjoy all of our usual shallow pleasures. There's a new self-consciousness, and no one, aside from maybe Catherine Zeta-Jones and a few of the producers of "Chicago," is prepared to push themselves or their ideas front and center.

And then there's Madonna. Strong, tough, in-your-face Madonna, she who taunted Catholicism, flaunted her body, vaunted gay culture, and did all of the above before it was cool -- or rather, before it was cool in the mainstream, and well after it was cool among young urban artists and intellectuals. Surely, in these turbulent times, Madonna will offer up some powerful message about the war. She has unapologetically stuck her neck and everything else out so many times before. Sure, she's no spring chicken -- but, more important, she's no Dixie Chick.

It came as little surprise to hear that Madonna's latest "controversial" video, for the single "American Life," features "disturbing images of war." In fact, such news is patently predictable at a time when disturbing images of war fill every channel, and "controversial" is a word that describes any music video or song that isn't merely about partying or wearing incredibly expensive jewelry but keeping it real deep down inside -- which seems to mean keeping what's real to yourself. For all her past complaints about her privacy, Madonna has never been comfortable hiding herself. So why did she pull her video at the last minute, blocking its release in the U.S.? How is it possible that, on Monday night, Germans got to see a Madonna video called "American Life," while Americans were left in the dark?

Just last week, Madonna seemed determined not to run away from criticisms of the video: "I feel lucky to be an American citizen for many reasons," she told MTV, "one of which is the right to express myself freely, especially in my work." Yet on Tuesday she issued a statement outlining her reasons for pulling the video's U.S. release: "Due to the volatile state of the world and out of sensitivity and respect to the armed forces, who I support and pray for, I do not want to risk offending anyone who might misinterpret the meaning of this video."

Hold on. Madonna doesn't want to risk offending anyone? Madonna is worried about those who might misinterpret the meaning of her throwing a hand grenade at George W. Bush, who proceeds to light his cigar with it? Wait -- she's already explained that, too. She told MTV, "The ending of the video is really important. I throw this hand grenade ... But it gets caught. And the one who catches it takes something that could be violent and destructive and takes the destruction out of it by turning it into something else. That's my hope for an alternative, not only to this war, but all wars." Ah, yes. Can't you hear them out there in the streets, yelling, "Cigars, not wars!"?

Listening to Madonna talk about her own art is as uncomfortable as hearing an intelligent politician like Bill Clinton mincing words about his affair with Monica Lewinsky. This is a talent that the former president and the first lady of pop share: No matter what outrageousness occurs behind close doors, the wider public is spoon-fed watered-down vagaries as a matter of policy. "Truth or Dare" long ago proved that words are not Madonna's strongest suit. But that doesn't mean that the "American Life" video -- or its delayed release -- is necessarily an empty attempt to drum up publicity or controversy.

Madonna's comments about the grenade might even make some sense, if they didn't fly in the face of every other image in the video (which you can view here). In fact, the grenade-as-cigar-lighter is perfectly in keeping with the video's disconcerting collection of images, a dizzying and extremely dark collage, which seems to suggest that the decadence of life in America is inextricably linked to our military dominance overseas. While such notions may be particularly uncomfortable at a time when our troops are so vulnerable, and we're consistently reminded of the moral imperatives of our involvement, it's still refreshing to see a mainstream artist willing to raise it, instead of just feeding us more glittery distractions.

In fact, it's those distractions that Madonna seems determined to skewer. While explosions occur and bombs drop on a screen in the background, models half-dressed in military garb walk down a runway, followed by what appears to be a young Arab boy draped in ammunition, and several covered Muslim women. Madonna carves "Protect Me" onto one of the stalls of a public restroom, indulges in some "Rhythm Nation"-style dance moves in a hallway, and then, tossing a half-full latté over her shoulder, raps about the pursuit of happiness via Pilates classes, personal trainers, metaphysical enlightenment and, yes, strong coffee.

At first glance, of course, this offering appears hopelessly cheesy and literal. What can Madonna be thinking, rapping about caffeine and yoga while bombs drop on the screen behind her? But then, her ability to fearlessly capture cultural shifts has always depended on an embrace of clunky, on-the-nose lyrics that often seem unwieldy at first. Papa, don't preach, I'm in trouble deep? Come on, Vogue, let your body move to the music? It's true that, from a distance, her passions look fabricated, particularly when viewed through a skeptical urban lens: We've known about these things for years -- gay culture, Marilyn Monroe, fetishism, cowboy attire. But Madonna has made a living by appropriating and exploiting cultural elements she collected along the way. If they didn't belong to her at first, she quickly made them her own.

And while she has often been praised for her ability to spot and embrace the images and ideas that have run their course on the fringe but that still have the ability to shock the mainstream, as a trend-spotter, Madonna is merely in step with a much larger herd that transforms those images and ideas into consumable goods. What sets her apart is how artfully she combines seemingly incongruous snapshots, concepts and sounds into a whole that feels intensely personal yet still reflects the culture at large. The indulgences of modern life, presented in contrast with what's happening overseas, have the power to make us uncomfortable and uneasy, and somehow Madonna's latest video evokes the same feelings. While her weapons may seem blunt at first glance, over time, her absurdly over-the-top, clumsily broad approach seems to capture some essential frequency of the times. And, in a strange reversal on most pop art, her creations seem to miraculously evolve into something subtler and more powerful upon repetition.

Despite the ominous predictions in the New York Times on March 31 that Madonna "may be looking at the final stages of a long career," "American Life" is destined to attract the kind of attention and emotional responses that guarantee her career is far from over. While critics might be tempted to follow the Times' lead, proclaiming that Madonna has lost her touch or that she's overstepped the boundaries of what Americans find acceptable, her work isn't nearly as shocking as the overreaction on the Drudge Report and elsewhere might suggest.

What's truly remarkable about our times is not these "controversial" works and the predictable debate about whether or not they're created just to grab the public's attention, but how few artists are willing to reflect the ugliness of the current political and cultural climate. While Neil Young, John Lennon and Country Joe McDonald took on the war abroad and in the streets during the Vietnam era, and U2 bellowed melodramatically about Bloody Sunday, our Jennys from the Block boast about "rockin' this business" and being grown-up enough to date Ben Affleck.

As Madonna's latest offering suggests, it's such shallow diversions -- her own and ours -- that got us into this mess in the first place. As Marshall McLuhan wrote, "Too much of anything, however sweet, will always bring the opposite of whatever you thought you were getting." Madonna may not be the most articulate spokeswoman for the times, but she has managed to capture the anxiety of American life at a time when affluence, escapism and dread are interchangeable elements of our daily experience. "American Life" is another example of her uncanny ability to personalize and amplify the contradictions and paradoxes of modern life.

Culturally, we can only benefit from pop artists who dare to hold a mirror to our times. No matter how warped that mirror might seem to some, Madonna's latest reflection is no more shocking than a random spin through the channels, from CNN to the Home Shopping Network to the WB and back to Fox News. It's a particularly bitter irony that the disaffected, reality-averse culture she savages so well in "American Life" seems to have persuaded her to shelve the video indefinitely.