Sigourney Weaver shines as a writer who helps a New York fire captain, played by Anthony LaPaglia, find the words to remember the men he lost on Sept. 11. 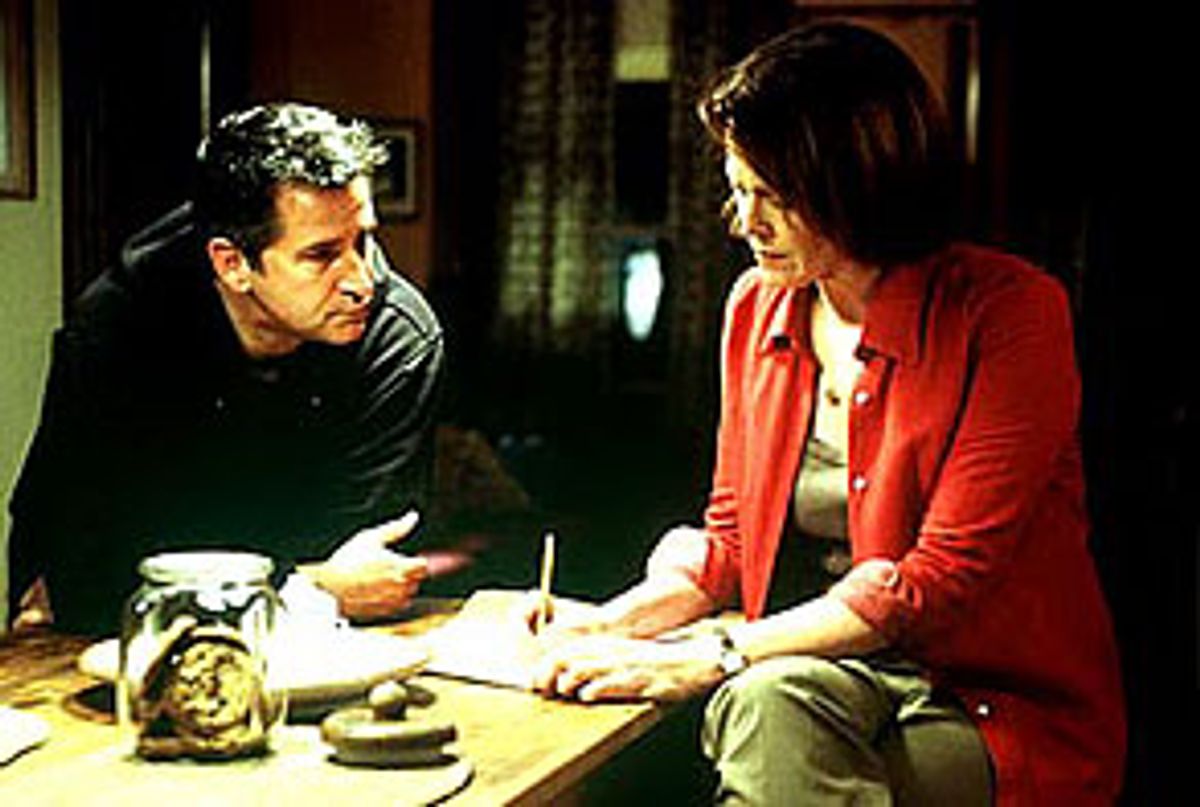 Immediately after Sept. 11, in New York at least, the world of writers seemed to be divided into two distinct groups: Those who rushed to express their feelings in writing, simply because they felt words were all they had; and those who were frozen, wholly unable to write at all, paralyzed by the sense that words -- previously their most reliable tools -- were suddenly, dishearteningly, useless. Neither approach was necessarily good nor bad. But it seemed clear that both groups, by writing or not writing, were bumping against the same shadowy but concrete uncertainty: We were struggling our way out of helplessness like a cat who'd been tied up in a bag.

"The Guys," directed by Jim Simpson and adapted from the play by Anne Nelson (which was written shortly after the Sept. 11 attacks and first performed in New York in early December 2001), is more about the seeming inadequacy of words than the triumph of them -- even as it ultimately acknowledges that, yes, as a way of capturing the essence of human experience, words are all writers have. Sigourney Weaver plays Joan, a journalist living on Manhattan's Upper West Side who's unabashed about telling us, in voice-over, how comfortable and well-worked-out her life is: She has a husband who loves opera as much as football, two intelligent, well-behaved children and a nice apartment nestled in a neighborhood that's populated with people who are very much like her in terms of education, class and political views. The way Weaver delivers that voice-over tells us that while Joan is a smart, likable person, with compassionate politics (in her 20s, she spent time in Latin America as a journalist), she's also at least a tiny bit smug -- even though she's only medium-well-heeled, she's still far removed from the way many other people in her city live.

But after Sept. 11, she, like almost every other New Yorker, becomes plowed under by feelings of sorrow and inadequacy. She has barely begun to burrow through those feelings when, less than a week after the attacks, she serendipitously meets Nick (Anthony LaPaglia), a fire captain who has lost far too many of his men and who finds himself faced with the daunting task of writing eulogies for four of them. Unable to get a word down on paper, he agrees to let Joan help him.

And so Joan and Nick sit down -- Joan with her pad and pencil and her genuine, but as yet untested, concern, and Nick with a stoic sense of professionalism that is nonetheless drenched with grief. He doesn't really know how to describe the men he's lost: One of them was his best friend; another was a "probie," a very young firefighter whom he never got a chance to know. ("It's terrible to say," he explains haltingly to Joan. "I can't even remember his face.") Joan coaxes the details out of him by asking questions, the journalist's stock in trade: What did so-and-so do in his spare time? How did he talk about his family? By listening to Nick and drawing him out -- his inability to talk about his men is part shyness (you can tell he doesn't think of himself as an articulate person) and part numbness at the realization that they're really gone -- she's able to form a shorthand mosaic of who these men were and what they meant to the people around them.

The scenes between LaPaglia and Weaver are the core of the movie, and they're spectacular. Less effective are the brief scenes connecting them, which consist of Joan's own reflections about Sept. 11 and its aftermath, imparted to us in voice-over. She sits at her typewriter and taps out lines like, "New York: My beautiful, gleaming, wounded city." That's not to say that people in New York (as well as non-New Yorkers with a special affinity for the place) didn't actually feel that way after Sept. 11. It's just that the prose feels embarrassingly purple. The gruffness of New Yorkers is actually a very vibrant form of friendliness, once you know how to read the code. In the days and weeks after Sept. 11, you could simply sense how that gruffness was imbued with layers of meaning and shared sorrow. Few of us would have said anything about our "beautiful, gleaming, wounded city," because we didn't have to -- the way the guy at your local coffee joint handed your change back to you, or the way a fireman holding down the fort at the fire station would nod and smile gently as you walked by, said it all.

It's unclear how the movie intends those connecting scenes. Are we supposed to read them as Joan's stumbling, inadequate, embarrassingly overwritten way of coming to terms with the tragedy? Or are they supposed to be genuinely moving, a writer's way of putting her own thoughts and experiences into words that resonate with the rest of us? Simpson himself doesn't seem to know what he wants those scenes to say, and they muddy the movie. Certain scenes are also marred by piercing, overwrought string music -- the eerie buzz of silence would have said so much more. There are places where it simply feels as if "The Guys" is trying far too hard. You don't have to dress up Sept. 11 a whole lot to get your point across.

But the scenes between LaPaglia and Weaver, directed and played with a straightforward austerity that occasionally moved me to tears, make up for every one of "The Guys'" flaws. Simpson (who, incidentally, is married to Weaver) and Nelson adapted the play for the screen together, and they have a fine ear for the way people talk to and respond to each other. When Joan, after listening to Nick's recollections of his men, strides over to the computer and taps out a few paragraphs for him to read aloud, you hear that she's writing in his voice, not hers. Reading the words aloud makes Nick nervous, but he doesn't sound unnatural. At one point he explains to her that all the men would take turns cooking meals in the fire station's kitchen; some of those meals were OK and some were barely edible, and one of his men always played amateur food critic, wisecracking about the quality (or lack thereof) of each concoction. As part of his eulogy, Joan writes, "The restaurants of New York are lucky he went into another line of work" -- a line that makes Nick laugh, and, more importantly, one that he knows will make his surviving men laugh as well.

LaPaglia plays Nick with his whole body. He's more sturdy than stocky, and when he reveals to Joan that he loves to dance in his free time, she recognizes (and we do too) that he's incredibly light on his feet even when he's just moving across a room. LaPaglia plays a guy who, as part of his job, needs to hold his cards close to the chest; flamboyant outpourings of emotion aren't going to help his men at a time like this. So he carries all his sorrow and heaviness in his eyes. We can see that he's a little wary of Joan at first, as he explains to her what his men mean to him. But the more he talks to her, the more he warms up to her: He opens his grief out to her like an embrace, and she instinctively feels the warmth of it -- it makes her feel connected rather than isolated or burdened.

Weaver is subtly sensational here. Early in the movie, she explains in voice-over why she didn't hesitate to help Nick. For one thing, the urge to do anything to help was instinctual. But she's also starkly honest with herself: "When was the last time I heard anyone say, 'I need a writer'?" "The Guys" is something of a wish-fulfillment fantasy for everyone who felt wholly useless after Sept. 11: What if a fireman (or anyone else who was suffering deeply) came to you for help and you were actually able to do something for him, other than just baking cookies or bringing flowers by the firehouse?

As Weaver plays her, Joan seems fully aware she's living out that fantasy, but she also takes the job at hand very seriously. She seems deeply affected by the realization that she never really knew that much about what firemen do from day to day. From Nick, she learns the difference between an engine and a ladder company. And in one of the picture's most moving scenes, she shows up at her local firehouse with some flowers and spends a few minutes chatting with the six or seven men (who are, incidentally, played by real New York City firemen) hanging around out front. "Do you have a kitchen in there?" she asks timidly, looking for all the world like a shy young girl who wishes she could fold herself up into invisibility (something to behold for an actress of Weaver's physical stature and commanding presence). She presses on awkwardly, to the men's puzzled amusement -- "Is it upstairs or downstairs? Are any of you good cooks?" -- before saying goodbye shyly and reminding them that if they ever need anything, the people in the neighborhood are eager to help.

In that scene, Weaver captures the sense of uselessness that so many of us felt after Sept. 11 -- but you also sense that something has shaken loose in Joan, something that has made her a better, more fully aware person. It's nothing so trite or condescending as finding out what "real" people (as opposed to writers!) do for a living. The connection Joan forges with Nick -- and, by extension, with the men who have worked with him -- is much deeper than that. He talks about his men, and she makes them whole on the page: Together they bring them to life once more, not just for the few lapping flickers of time it takes to read four or five paragraphs, but for as long as those left behind -- families, friends, colleagues -- hang onto the memory of them.

At one point, Joan breaks down in frustration, confessing how helpless she feels in the face of Nick's suffering. "All I have are words," she says plaintively, to which Nick replies, with a great deal of kindness, "Those are your tools." The rumbling comfort imparted by "The Guys" is that he's not wrong. Words, and not just written ones, are sometimes all we have. And sometimes they surprise us by being almost adequate to the task at hand.