"The Man Without a Past" 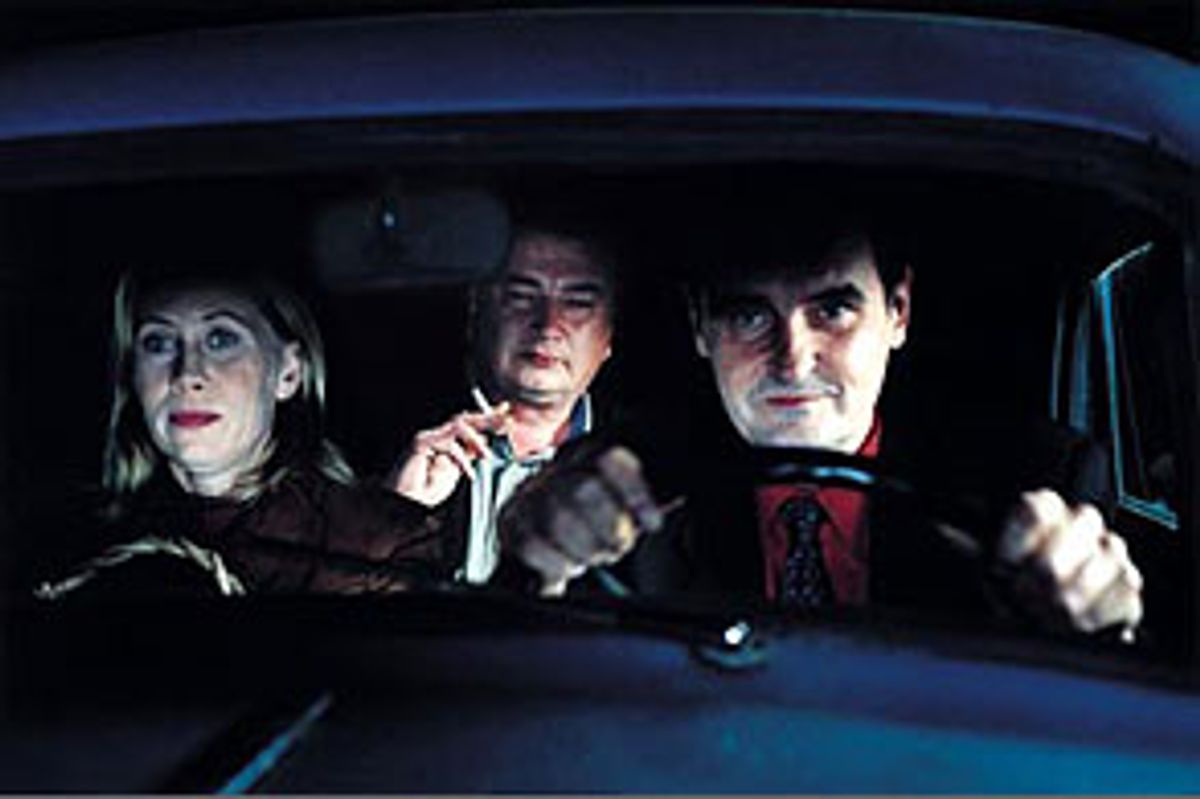 If the saintly downtrodden poor of Charlie Chaplin's early comedies adopted the stoneface countenance of Buster Keaton, the result might be something like Aki Kaurismäki's "Man Without a Past." Everyone in this Finnish movie -- from the amnesiac hero to little kids encountering a body by the river, from a lovesick Salvation Army officer to a bankrupt contractor reduced to robbing banks to pay his workers, from the inhabitants of a scrubby community of the poor to the corrupt security officer who charges them rent for their pathetic little hovels -- all greet each new turn-up, good or bad, with the same "What're gonna do?" shrug. This is a comedy where even the dog is deadpan. And after a while, their deadpan manner comes to seem almost eloquent.

Aki Kaurismäki is definitely a hipster, and in his previous films (the four or five I've managed to see; he's made 26) the deadpan tone was somewhat akin to the comedies of Jim Jarmusch (who, fittingly, is a big Kaurismäki fan). That approach made for some priceless moments, like Jean-Pierre Léaud walking into a tough bar in "I Hired a Contract Killer" and ordering a ginger ale. (When the badass patrons stare at him menacingly he snarls, "I eat guys like you for breakfast!") It also made some of his movies, like "Leningrad Cowboys Go America," little more than stunts.

There's nothing disaffected or deathly cool about Kaurismäki's work here. In "The Man Without a Past" the director's deadpan style is his solution to making a poignant comedy without falling into sentimentality. The movie has the spirit and, in its stripped-down way, something of the lyricism of silent comedy. It's minimalist all right, but not in a way that shuts out emotion. And because Kaurismäki doesn't squeeze a response out of you, you feel free to respond. The uniform tone winds up both emphasizing the emotions and keeping them beautifully in check.

The story is set in motion by a horrible act of cruelty. A man (Markku Peltola) travels to a city in southern Finland to find a job and is mugged by a trio of brutes who beat him and leave him for dead. When he awakes in the hospital -- after being pronounced dead -- he has no memory of who he is. Wandering the city in his broken-down state, he's taken in and cared for by a worker's family who live in a dilapidated trailer. With their help he gets on his feet, takes his own trailer, and earns a little money doing odd jobs at the local Salvation Army store. There he begins a romance with Irma (Kati Outinen), a Salvation Army officer whose fallen face looks like it long ago abandoned hope of anything good coming her way.

If you come to "The Man Without a Past" not having seen any of Aki Kaurismäki's previous movies, it may take a while to get used to. Don't let the style fool you into thinking he's heartless. This is an extraordinarily good-natured movie. Apart from the beating the hero receives, and some snippy attitude from a civil servant, nobody here has an unkind word for anyone else. Little kindnesses keep cropping up, like the free meal given the man when he wanders into a cafe to beg a cup of hot water (in the best Chaplin style, he carries a used tea bag in a matchbook), or Irma's outfitting him with a free suit from the Salvation Army's stores and then arranging for him to get a job, or the electrician who wires the man's new trailer and helps him repair a jukebox he finds in the dump. Even the bank robber only steals his own money (frozen by the bank) and makes sure the teller doesn't give him too much.

The movie's makeshift community of the poor may remind you of the similar community in Vittorio De Sica's fable "Miracle in Milan." The poor here have banded together on the fringes to fend for themselves and take care of one another. These people live close to the edge, but you soon stop worrying about them, because their unruffled approach tells you they've seen worse and they'll get through this. Even the closest thing here to a villain, that corrupt security officer (Sakari Kuosmanen) who turns a buck charging the poor rent for their lodgings, is a big softy who doesn't follow through on any of his bluster. He's all bark and no bite. His dog isn't even that. A blond mutt with ears going out into lazy points, the pooch has been named "Hannibal" by his owner to accord with his killer nature. (Some killer; the mutt doesn't so much as bark in the entire movie.)

Kaurismäki is lucky in using actors who tune right in to his wavelength. Markku Peltola has a broad face with features that don't fit together. His beady eyes and thin mouth share space with a prominent, hawklike nose. Much of the comedy in the movie comes from Peltola's ruminative regard for everything from a bowl of cabbage soup to the cigarettes he rolls. One of the movie's running gags is that he keeps running into officials -- welfare officers, bank workers, employers, cops -- who ask him his name. The movie's conceit is that he finds more of an identity as an amnesiac than he had as just another unemployed worker. His ordeal doesn't keep him from being involved in life. He takes pride in his new trailer, dingy though it is, and even plants a little vegetable garden outside. (It's a typical Kaurismäki joke that the garden produces tiny little potatoes.) When he hears the Salvation Army band practicing in the store's basement, he suggests that some rhythm numbers would perk up their repertoire and broaden their appeal. The band has a good start for a rhythm combo -- they've got matching outfits for one thing. Soon they're playing to a gathering of folks that don't just stand there listening to their hymns but get up to dance. This is one of the movie's loveliest scenes, a ragged version of the country dances you might see in a '30s French film.

There's great music all over the soundtrack, including a couple of numbers by the '60s band the Renegades, and a performance from the Finnish singer Annikki Tähti who plays the manager of the Salvation Army store and whom the band recruits as their vocalist. The affection Kaurismäki lavishes on Tahti as she sings (she's been a star in Finland since the '50s) lets you know that his style isn't the result of a lack of feeling. You see the same affection when Irma slips into her lonely little bed at night and tunes the radio to vintage rock 'n' roll, or in the pained look of a welfare officer as her boss accuses Peltola of wasting their time.

Kaurismäki is one of those directors -- Bill Forsyth is another -- whose comedies don't signal us when to laugh. It's possible that everyone who sees "The Man Without a Past" will laugh at different things. For me it was the stiff, formal manner in which two men turn away from each other after shaking hands, the jubilant way Peltola pronounces "jukebox" in Finnish ("Yoo-ka boxy!"), and everything Hannibal does. The camera barely moves in the course of the movie, and the actors tend to remain rooted in the same position in each shot. But it never feels static. For a director so committed to deadpan, Kaurismäki is far from affectless or aloof. His deadpan comedy about people's capacity for kindness has the sweetest soul of any picture around right now. It's a little ray of grimy sunshine.