"The Cutting Room" by Louise Welsh

A Glasgow antiques dealer finds horrible pictures in a dead man's house, in this captivating thriller from a new Scottish writer. 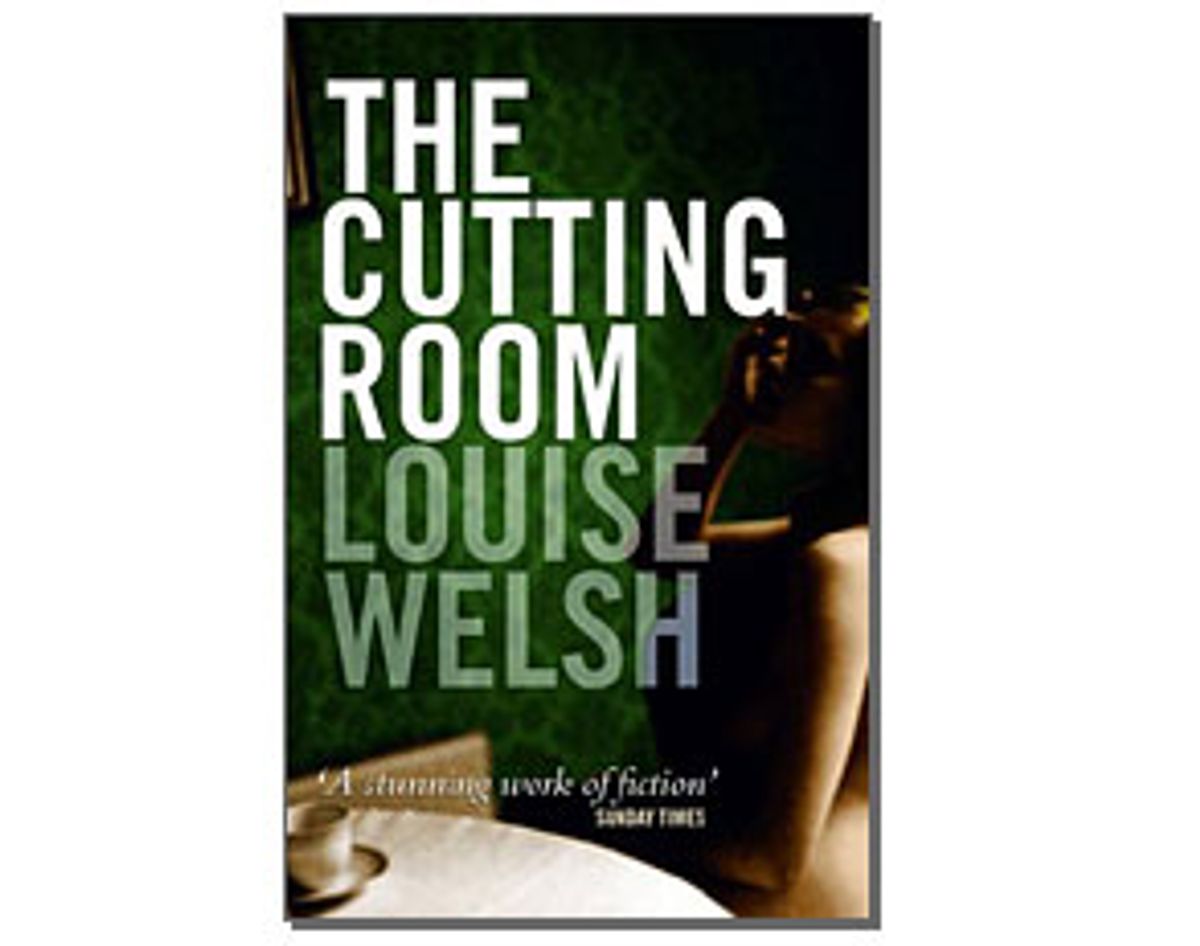 In recent books, writers like Stephen King and Val McDermid have been addressing the question of where novelists and readers become culpable in the suffering of victims. Welsh can hold her head up. There isn't a moment in "The Cutting Room" where she crosses that line.

"The Cutting Room" is being sold as a thriller and, technically, it is. I hesitate to describe it that way, for fear that some readers, wary of a genre exercise, will pass it by. But I also realize that hesitation might seem like a backhanded slap at the fine writing being done in crime fiction. To say that the book is more than a thriller, and that Welsh is more interested in character and in the sharpness of observation than in genre convention, is to imply that all crime fiction sacrifices character and observation to plotting. Rather, what makes Welsh different is that the urgency and motion of the plot come more from the way her hero is pursued by his own conscience than by any outside forces.

In "The Cutting Room," the hero is Rilke (make of the name what you will). He's in his early 40s, and he's a gay auctioneer for one of Glasgow, Scotland's perennial but less salubrious auction houses. (For American readers, even the company's name, Bowery Auctions, denotes a certain seediness.) "My apprenticeship had been served in an atmosphere of regret," Rilke says. "The regret of my elders at the passing of 'the good stuff,' the Georgian silver, treasures and spoils of empire that according to CP had littered the staterooms of his day. I'd rolled my eyes and cursed him for an old man. Now I mourned junk-shop Victoriana and art-deco bibelots. I missed the street hawkers and book barrows of Paddy's Market's prime, shook my head at what passed for quality, and pitied youth. The best was not yet to come. It had vanished for ever."

Welsh's description of the inside of Bowery Auctions, floors of closely packed detritus that will never travel beyond its present storage, is a grander version of a Dickensian hovel, like the sinister rag-and-bone shop where the dead Scrooge's belongings are divvied up by charwomen for what they can get. Like the city beyond it, the auction house feels, in Welsh's vision, stifling and musty, a place of utter deadness, and yet crowded with the emanations of ghosts.

One of those ghosts ends up haunting Rilke. Called to the mansion of an elderly spinster whose brother has just died, Rilke finds a trove of the kind of antiques he didn't think existed anymore. Sensing a windfall for his company, he agrees to the old woman's demand that the three-story house be completely cleared in one week, a third of the time it would normally take. She also tells Rilke that her dead brother, a lifelong bachelor, has a private study that she wants Rilke alone to attend to. "I would appreciate your discretion," she says.

In a typical thriller, ominous figures with some involvement in the crime would come out of the woodwork and go after Rilke to keep their secret from being exposed. This is of no interest to Welsh. "Let's just say I can't leave her there," Rilke explains, and it's all he needs to say. The clear implication of Rilke's quest is to make sure that the dead woman is more than just another item to be stored among the junk of the past.

Rilke is spurred by nothing more than his sense of decency. It's a mark of the way Welsh avoids any trace of genre familiarity. Rilke is not the typical sentimental figure of hardboiled fiction -- the lone, good man who cares. He's a cynic, as adept at summing people up as he is at mentally cataloging the effects of someone's estate. He takes a seen-it-all attitude toward the professional scavengers who inhabit the city's auction houses, understanding them as creatures who feed off carrion. If he doesn't condemn them it's only because he knows he's in the same trade.

But Rilke's also a humane cynic. He doesn't deny people's good impulses, and he doesn't delude himself about what people are capable of. He's not so jaded that he can suppress a moral shudder when he encounters what people are capable of at their worst. And Rilke is at home in the grunginess of Glasgow, never romanticizing it but regarding it with a cold, though not unfeeling, eye.

Fittingly, Rilke is the creation of a writer alive to people. Each character in "The Cutting Room," from Rilke's blowsy broad of a boss to a tranny drug dealer, no matter how small, comes off the page vividly. Sometimes we can't make up our minds how we feel about even the most likable of them -- like the aspiring young filmmaker Rilke befriends, who sees the snuff photos and talks of them in terms of special effects and the "ghastly beauty" he compares to images from classical art.

"You know your art history," he says. "We're trained to enjoy these images," and he's not wrong. At that moment, however, there's a glimmer in this decent young man of the detachment from violence that has become full-blown in the actual killer.

After Rilke, the most prominent character in the book is Glasgow itself. Welsh gives a strong sense of a city that has become its own gloomy monument: its life lived in pockets, the smoky pubs and shabby auction rooms and used-book stores, the park where Rilke does his cruising, the dwellings that are both shabby and chic. Life in "The Cutting Room" feels like a conglomeration of openly lived secrets, all existing on the teeming margins. In one brilliant section where Rilke makes his way to a grimy little porn shop, Welsh includes a long description of the buildings and the people he meets on the way -- a group of Sikh pensioners lounging outside a grocery, a fearful old man hoarding his trove of scrap metal, a cop taking a suspect into custody, office workers being disgorged from their high-rises at the end of the workday. None of it feels as if it's getting in the way of the story; it all feels like an essential connection to the life of the city, and we're conscious that Welsh takes the pulse of the city and puts it, breathing, onto the page.

"The Cutting Room" is further proof of the renaissance of Scottish fiction, a movement often credited to the likes of Irvine Welsh, James Kelman and Geoff Torrington. With the exception of Alan Warner (author of "Morvern Callar"), however, the vitality of Scottish writing has been better represented by crime novelists like Val McDermid, Ian Rankin, Denise Mina and John Harvey. Louise Welsh may prove able to straddle the two camps, attracting the readers of both literary and genre fiction. You can find traces of morality tales, urban fiction, crime stories and Gothics in "The Cutting Room" without finding any single point of comparison that mirrors the book's unique voice or hardened humanism. It's a brilliant debut.