"It's a catastrophe for tyranny. It's a great day"

Pro-war liberal Paul Berman celebrates the fall of Baghdad. But the real fight for Iraqi freedom, he warns, lies ahead -- and will take years. 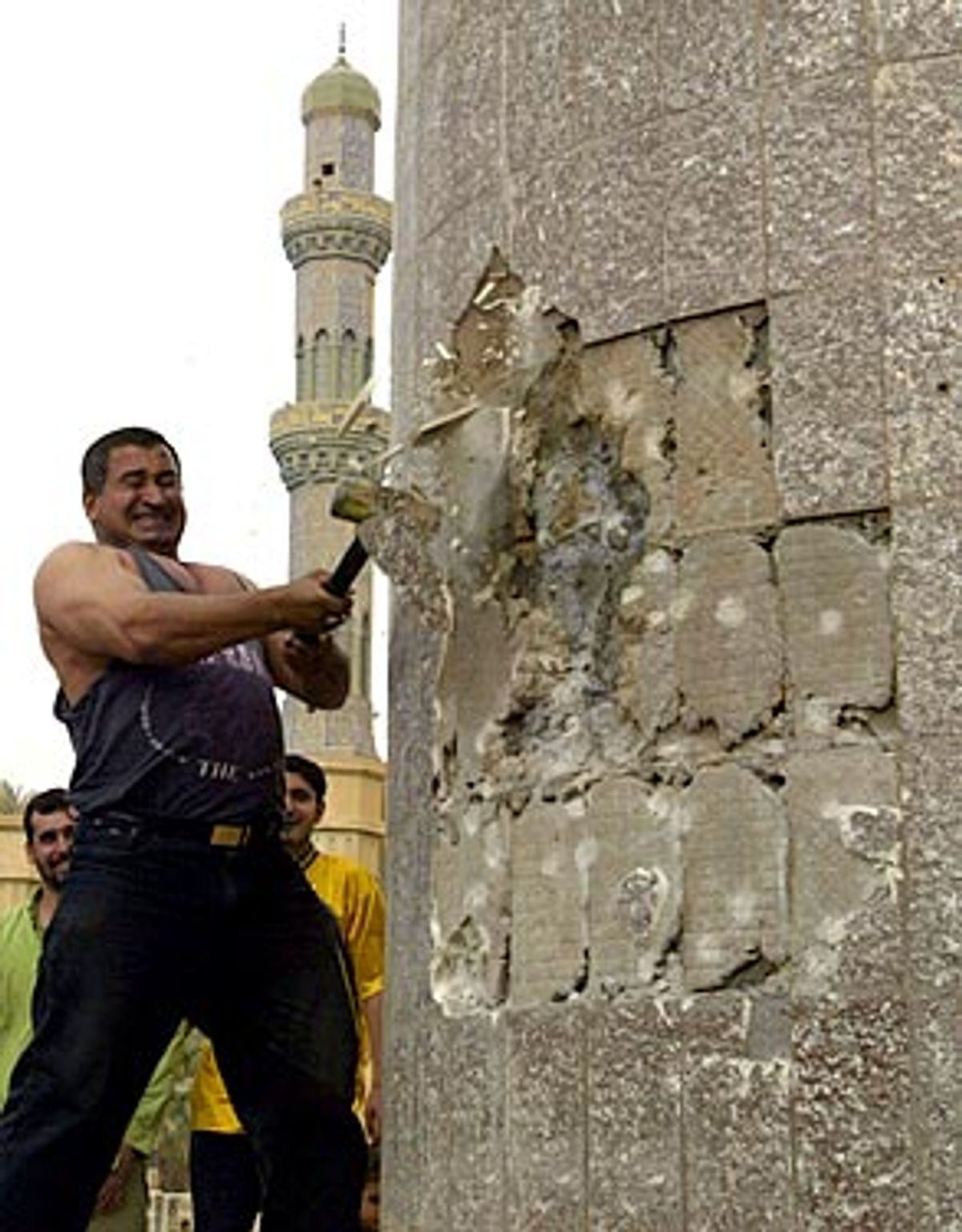 When the Iraq war began, Salon talked to Paul Berman, author of "Terror and Liberalism" and a liberal intellectual who favored the military intervention to topple Saddam Hussein's regime, even though he didn't entirely trust the methods and motivations of the Bush administration. In that interview, Berman said that the American left should reconsider some of its traditional arguments against the war and instead march in support of overthrowing the fascist dictatorship -- one he compared to Nazism. Now that Baghdad is largely under the control of the U.S. military, and at least some Iraqis are dancing in the streets, many liberals and those on the antiwar left wonder where to go from here.

Salon spoke to Berman about his reaction to the day's events.

So this is a good day. How have you felt watching TV?

I've been ecstatic. It's a revolutionary moment. It's a catastrophe for tyranny, obscurantism, bigotry and fascism. It's a great day.

Was this what you'd hoped for?

I hoped it would be quicker than this, but yes.

I would imagine that for people who were against the war, it's somewhat of a confusing day. How should the left be thinking about this?

First, I would advise the people who feel confusion to explore their own confusion. The worst thing people on the left can do is to look for ways to cling to some old-fashioned ideas that are not always appropriate.

Certainly, today, at least, is a victory for the Bush administration.

I guess that's right. I don't give a damn about that. What's important about today is the overthrow of this horrible tyrant. People on the American left should get over their obsessions with the horrible Bush in order to be able to recognize the grandeur of the moment. Just because the horrible Bush's father was president in 1989 did not mean that the revolutions of 1989 were horrible. They were great. The overthrow of Saddam is a great accomplishment.

OK, and so what should the left be concerned about now? It's a joyous moment, but one of great uncertainty too. And some of the left's worst fears in terms of imperialism and occupation could still be borne out.

What we on the left should do is press for a genuine liberal revolution in Iraq, which is to say press our own government to do more, press our institutions to get involved. There are two gigantic left-wing impulses that have been at odds here and we have to choose which is more relevant -- anti-imperialism and anti-fascism. What I hope is that everyone recognizes that we're in an anti-fascist moment. We should make sure the fascism of Iraq is really and truly overthrown. And so if in our anti-imperialist ardor we end up pressing the U.S. to do less in that region, to pull out quicker, to turn over power quicker to whatever colonel will ask for it, that would be a mistake.

But do you support Ahmad Chalabi and the Iraqi National Congress as the Bush administration does? There are indications that the Iraqi people will not accept leaders who have not been a part of the country for so many years.

We have no idea. The truth is that the Iraqis have no idea. It would be foolish to imagine that they do or could. They've had no political parties. They've had no way to express or even form opinions. No one inside the country has been able to put themselves forward as an opposition leader or even as a dissident. They're starting at zero. I'm sure it will be a long while before they're in a position to have legitimate political parties and leaders. It will be a long while before they can conduct normal business without killing each other.

They're in much worse shape than much of Eastern Europe, which came out of Communism with alternate leaders. And worse shape than Germany, which had been under Hitler for only 12 years and which did have some old, well-established parties that could come in from exile or back from the camps and play a role.

We ought to remember that Germany was not set up as a full democracy for a long time. In some ways, Germany was not a full democracy until 1989. The first thing the U.S. and the allies did was to ban the Nazi Party, which was the principal party of Germany. The allies did a lot and took control of all the German institutions and began to reshape them. All that took a long while. The European Recovery Act of 1948 was a big deal.

We ought to remember that in terms of the left -- in regard to the European Recovery Act and the Marshall Plan -- the American left split. Some people opposed all that -- the people who had been associated with Henry Wallace, who was the [Ralph] Nader of his day, and people who were on the Communist Party side of things. But the socialist democrats and the liberal left was for all that. And we ought to be able to look at that split and realize some were wrong. We want more engagement from the U.S.

More engagement from the U.S. than the United Nations?

Obviously, security -- the military -- will remain in American and British hands and that's as it should be. The U.N. has a dismal record on all that. But I think bringing in the U.N. and France and Germany is a good idea. And it will add to the legitimacy of the effort and add to its success because France and Germany have a lot of capabilities. It would be completely stupid for the petty rancor between Bush, Chirac and Schröder to continue to do damage, because it does damage to Iraq.

How do you feel about sending possibly more American soldiers over there?

I feel perfectly fine about it. I wish there were American soldiers in Afghanistan too.

But at what point does it become an occupation?

You mean, how does it become its opposite? It's true that it can turn into its opposite. We ought to keep an eye on Halliburton and the Bechtel Corp. and the other American pirates whose interests are not those of the U.S. or those of Iraq. That's a danger. Somehow the U.S. was able to avoid that in Germany in the 1940s.

There's been some talk too that Americans won't tolerate a Shiite regime, representing the Iraqi majority, because they're afraid that regime would ally itself with Iran. Is that possible?

For the moment it's inconceivable that any new government will be formed in Iraq, and the Iraqis are not in a position to do anything for themselves. Of course, if we walk away, power in Iraq might fall into the hands of the Baath Party and Iraq's neighbors. That's one of the reasons why it's going to take a while to form an Iraqi government. One of the goals should be to encourage liberal development in Iran, next door. The dictatorship of the extremist mullahs in Iran is very dangerous.

Do you think we should invade Iran?

No. But I do think there is an Iranian liberal movement, a real dissident movement, and we should look on those people as our comrades and allies and help and encourage them.

So to get back to the left, what's the big issue here?

The big issue is to make sure that the efforts on behalf of Iraqi liberalism and a new Iraqi society will be ambitious enough, well-funded enough and include enough of the institutions of American life. We can't count on Bush to do it right. He's had a pathetic record on all this. He's not been helped by people on the left, which has only worsened the problem.

What kind of American institutions are you talking about?

American universities have established relations with universities in Eastern Europe. [George] Soros helped found a central European university. I think that this kind of thing in connection to Iraq and the Middle East is a good idea. In the last portion of my book, I try to point to a few ways in which people could do something. Never mind what Bush is doing. Let's define our own policy to do more, not less, on behalf of liberal revolution.

Instead, people tend to say, "Oh, I don't trust the Bush administration, therefore we should do nothing at all." But really the nature of American society is such that there are a lot of things people can do whether or not the government is doing it for them.

Immediately after the defeat of the Nazis, the U.S. State Department and the Army were running things in the American sectors of Germany and wanted nothing to do with the German unions and the German democratic left. But the American unions sent in their own people to support the German social democrats and the unions. And that was a really important thing to do.

Do you have faith in Bush?

Well, I guess the Bush administration turns out to be pretty efficient militarily, which is good. But I don't have faith in them and never have. I don't have faith that they have a commitment to a liberal notion of freedom and a just society. I think they need to be pushed on that. The American left should get involved, in that we ask ourselves why the American follow-through in Afghanistan has been inadequate. One of the answers has got to be that there's been no pressure on the Bush administration.

Nobody's marching in the streets [for the U.S. to stay in Afghanistan]. Instead, the pressure on the Bush administration from the antiwar left has been to get out as quickly as possible. And the Democratic Party isn't making speeches demanding more engagement.

Oh, you know, when we talk about pressure from the left I don't even think about the Democratic Party.

Right, neither do I. My impression is that the Democrats have been caught between the antiwar left on the one hand and the Bush administration on the other and have not been able to define a sharply marked position of their own.

Right. And as far as the marching for sustained liberal engagement in Afghanistan and Iraq, I'm skeptical that Bush would pay attention to that.

The recent antiwar marches have been huge and sometimes really disruptive. When they see hundreds of thousands of people marching in the streets they know they could get in the situation that faced LBJ and Nixon.