A battlefield far from the front

With the anger of the Muslim world focused on Iraq, jihadis extend the war to volatile Kashmir -- leaving 24 Hindus dead and hope deeply strained. 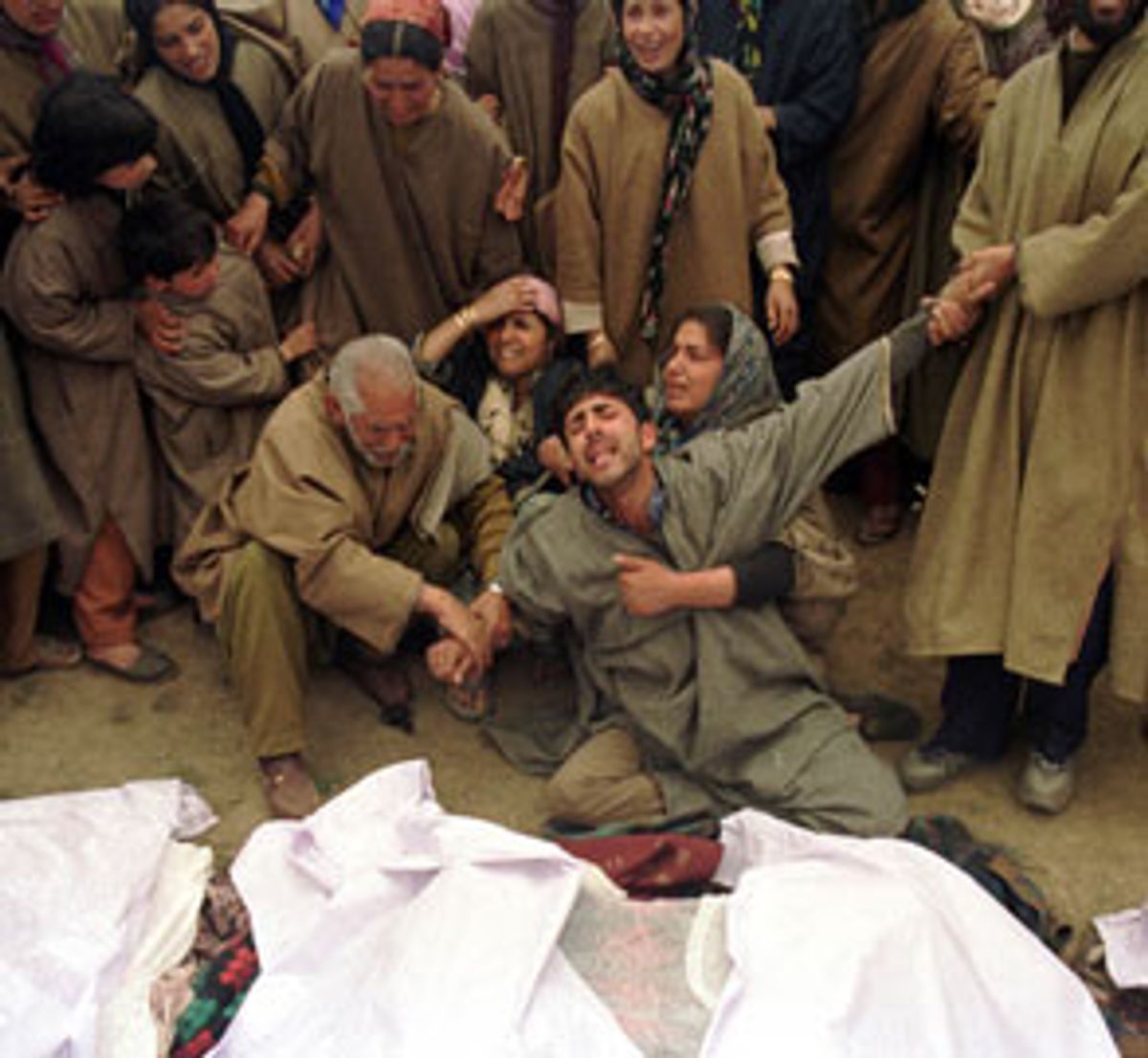 In the chill of Kashmir's lingering winter, gunmen in military uniforms crept into a backwoods village where a dozen Hindu families had bundled up for bed. The masked men banged on doors with rifle butts, corralling as many villagers as they could into the town square -- men on one side, women on the other. They removed jewelry, slicing one woman's ear to recover a gold earring. An hour and a half later, the intruders unloaded a flood of bullets that left more than half this village's Hindu residents dead.

As morning draped sunlight on Kashmir's worst massacre in three years, survivors swayed and wailed over 24 corpses lined up in the dirt -- 11 men, 11 women and two boys, aged 2 and 3. An old Hindu man slumped under a tree just a few yards from the bodies of his two daughters and two of his three grandkids and broke into a feeble sob. His Muslim neighbor stroked his arm and whispered, "Be patient now."

But soon after, when Chief Minister Mufti Mohammed Sayeed, the Kashmiri head of state, arrived by helicopter to survey the scene, the grandfather rose to his feet. He gestured sharply at his dead family and bellowed as he paced back and forth, echoing the question everyone in Nadimarg was asking: How could this happen?

Inspired by the same brutal logic that brought down the World Trade Center, Muslim jihadis fighting for ownership of Kashmir are capitalizing on a global climate of religious tension. Both democratic India's regression into religiously based politics, marked by the rise of a pro-Hindu ruling party, and the spectacle of the U.S. attack on Iraq have given Kashmir's jihadis fresh propaganda for religious war. Their timing comes near the one-year anniversary of the horrific violence in India's western state of Gujarat when Hindu mobs slaughtered 1,000 Muslims in the streets.

The leader of Lashkar-e-Toiba, perhaps the scariest militant outfit in Kashmir, said this week that killing Hindus is justified. "Our policy of Kashmir through jihad is absolutely right," he was quoted as saying in several Indian papers. "We would like to give India a tit-for-tat response and reciprocate in the same way by killing the Hindus, just like it is killing the Muslims in Kashmir."

In the latest phase of a dispute that spans a half-century, India and Pakistan are once again squaring off over Kashmir. Since a standoff last year when the world's two newest nuclear powers had placed a million troops along their border, a nervous status quo has prevailed. But the massacre in Nadimarg -- and the worldwide repercussions -- are a clear signal that tensions are building again.

India and Pakistan have fought three wars over the Himalayan state, which rests along their northern borders. The first was in 1947 when the subcontinent expelled its British rulers. Since then, Pakistan has controlled the western third of the state, with the rest controlled by India.

In the decades following Kashmir's independence, India allowed the ethnically and linguistically distinct Kashmiris some limited autonomy. But when state elections in 1987 were rigged in favor of a pro-India party, a cadre of young nationalists, already frustrated by institutional decay in the state, took up arms. Many of them believed that the entire state, both Hindus and Muslims, should be independent of the two regional powers that surround it.

But the militancy has given Kashmir years of bloodshed. Since independence fighters first picked up guns in 1989, at least 50,000 militants and civilians have died. The penetration of Islamic fundamentalists into the militants' ranks has further spoiled the message of religious unity. While the early stages of the insurgency were nationalist in tone, Pakistani pan-Islamists had by the mid-1990s begun to distort the objectives of the struggle, casting Kashmir as part of a broad war for Islam that includes battlegrounds in Chechnya, Afghanistan, and now Iraq.

Last week, Indian Foreign Minister Yashwant Sinha argued that a preemptive invasion of Pakistan would be more logical than the U.S. invasion of Iraq. Pakistan officials promptly warned of a "befitting" response. U.S. Secretary of State Colin Powell quickly intervened, urging an end to the volatile words that could create an apocalyptic spiral.

The latest tensions come after a hopeful lull. After India administered the region's first fair elections in decades, Sayeed's pro-India administration came confidently into office last October promising to make friends between separatists who want independence and Delhi, which refuses to let go. And for several months, a harsh winter imposed a freeze on the violence.

But under warming skies, as emotional anti-U.S. protests have filled town squares across the state, the valley's posse of Islamists has seized the moment to re-create a mood of terror. They know that their greatest support comes when people are polarized.

Peddling horror in the name of Allah, they have in recent weeks sliced off the noses of six villagers suspected of spying for the army. They've assassinated a separatist leader who had gambled on dialogue with Delhi to the ire of his hard-line compatriots. And in Nadimarg, they've sown new religious hatred between the 8,000 Hindu Pandits who live among 5 million Muslims in the valley.

Though Nadimarg is just 30 miles south of Kashmir's capital city of Srinagar, the drive takes nearly two hours. The village is tucked deep into the countryside where rolling, dirt roads wind through yellow mustard fields, white-flowered apple orchards and dense forest. Along the way, small girls in headscarves chant morning prayers in schoolyards. Grimy boys in woolen coats play cricket with balls made of tape.

The village stretches along the banks of a ravine. The Muslims live on the opposite side of the divide from the Hindus, who have painted pink "om" signs -- the Sanskrit symbol for peace -- on their red, two-story brick homes.

Most of the village's 50 Hindu families fled south near the onset of the insurgency in 1990 along with as many as 150,000 other Hindus in the valley. Some 8,000 of them stayed behind, living in more than 100 different villages.

Sayeed's new administration had begun preparations to bring the Hindus back to the valley, but for now that is out of the question. "How can we live among them?" said R.L. Raina, president of a camp where some 2,000 refugee families live in the plains of Hindu-majority Jammu.

During the exodus of Hindus, Nadimarg's 11 remaining families took confidence from the assurances of their Muslim neighbors and stayed behind. Local police promised them protection.

But in the attack, police said, the six constables on duty were easily overpowered. Less than a dozen gunmen, dressed in army fatigues, bulletproof vests, leather boots and helmets, cornered them and seized their rifles. Eyewitnesses said the attackers spoke both Kashmiri and Urdu, the language of Pakistan.

Mohan Lal Bhat, 19, said he crawled out of his home's second-story window and hid behind tin rafters while his father, mother, sister and uncle were dragged from the house. He saw the men gather his family and his neighbors around a lantern beneath a Chinar tree, and watched as they opened fire. "I feel useless," said Bhat, his cheeks red from sobbing. "What can I do? You tell me."

After the shooting, he said, the militants walked as far as the local school when they heard a child cry and returned. He recounted their words: "'Our work is not completed. Go back and shoot him.'"

As a messenger sprinted five miles to the nearest police post in Zainpora, Bhat said he held 2-year-old Manu, whose mother had shielded him against the fire, for over an hour. The boy was only shot in the foot, but by the time medics could reach the village, he had bled to death.

By morning, security personnel and armored trucks had swarmed the village. At the murder scene, next to the kerosene lamp that lit the execution, dried blood colored a bed of leaves where only two blue flip-flops, a muddy black shoe and a skullcap remained. Nearby, incense smoke curled above the row of corpses draped in clean white sheets, where mourners pressed spoonfuls of holy water, symbolic of the Ganges, between their purple lips in preparation for cremation.

The massacre site quickly became a political stage. Sayeed came by helicopter and stood over the bodies, shaking his head as witnesses gave testimony. Just 20 feet away, a pro-independence leader, Shabir Shah, rallied a crowd of equal size with the cheer, "Hindu, Muslim, Sikh, Christian, we are all brothers."

While India's religious tensions have peaked in recent years, Muslims in the valley say they share a common identity -- known as Kashmiriyat -- with their Hindu neighbors. They say the exodus of thousands of Hindus out of the valley was engineered by state forces, not Muslim separatists.

In the days following the massacre, Nadimarg's remaining Hindus packed their belongings in preparation and set off for Jammu, while their neighbors looked on in fear and shame. "We feel we have cheated them," said Mohammed Ismael Mir, a neighboring Muslim. "We asked them to stay and then this. They stayed here on assurance of their neighbors."

Government officials intercepted the outcasts just as they were preparing to leave, with a promise to pump up security if they remain. They agreed to wait a few more days while they reconsidered. Political stakes remain high as the country awaits their decision.

Under a gray sky on the day after the massacre, a local journalist who had covered the insurgency since its inception sat among visiting reporters on a leafy knoll beyond the corpses smoking a cigarette. "The air is ripe for more violence," he said, shaking his head. "This is not over." Then he opened his wallet and pulled out a scrap of paper from which he read a poem written by a friend. "Before Satan gets you," he read, "get the hell out of this place."

Mike McPhate and Jessi Hempel are writers based in Berkeley, Ca.

Jessi Hempel is a freelance writer based in Berkeley, Ca.