The only thing you'll be mad about is spending 10 bucks to watch Jack Nicholson and Adam Sandler try too hard. 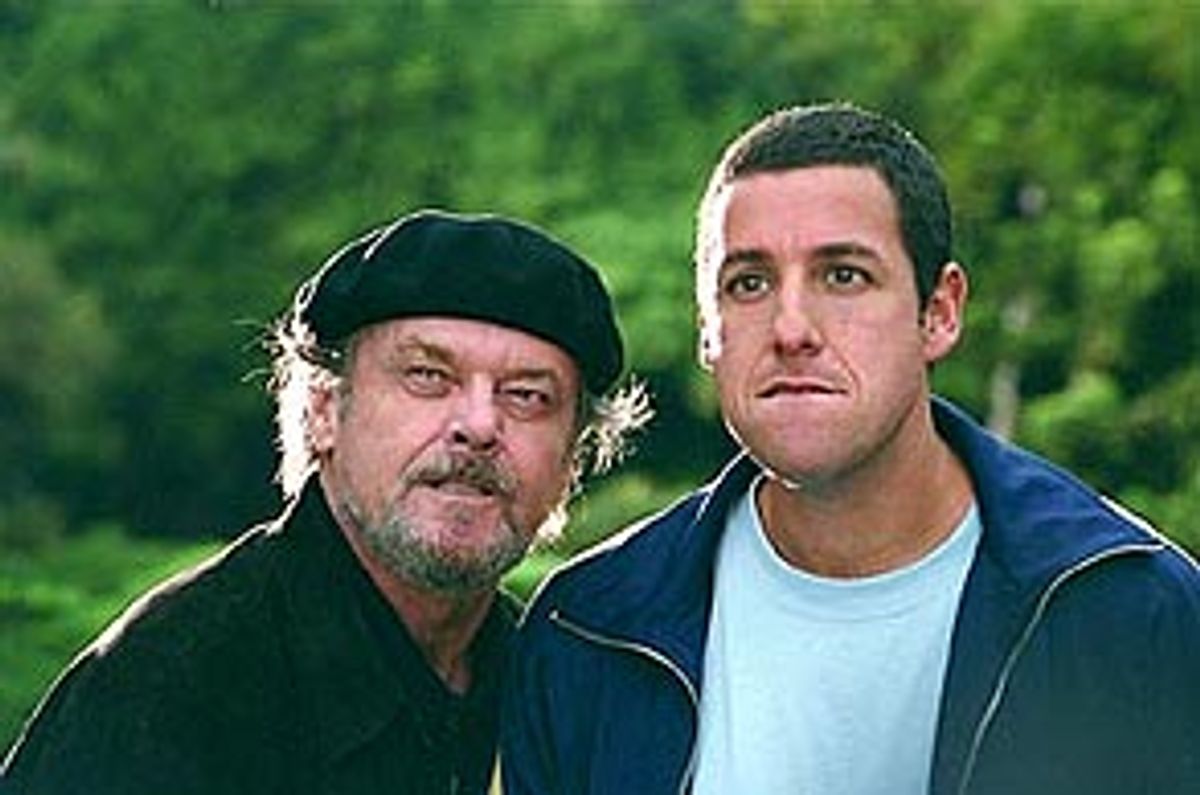 "Anger Management" is so almost-but-not-quite funny that it feels like one colossal ripoff. A truly bad comedy can make you enraged at having wasted the price of a ticket, not to mention your time -- you may not be happy, but at least you know you're alive. But "Anger Management" doesn't allow you even that much catharsis. The jokes surge past in wobbly, wavy rhythms, like oblique meteors; sometimes they graze you, but they never quite hit. You keep asking yourself, "I could be laughing at this. So why aren't I?" And the more you question your responses, the less energy you have left to simply laugh.

"Anger Management" is designed to make you uncomfortable with yourself. Director Peter Segal ("Nutty Professor II: The Klumps") and writer David Dorfman seem to be striving for the same level of prickly energy as, say, Jay Roach's "Meet the Parents," which crackles by, pleasurably, on a current of paranoid unease. That's one of the hardest types of humor to pull off: The jokes depend on your checking and double-checking your own responses, and by the time your brain has made all the proper synaptic leaps ("Would I have ever thought I'd see Jack Nicholson make Adam Sandler stop his car on a busy bridge for the sole purpose of singing 'I Feel Pretty,' and is the scene living up to the expectation that I never knew I had?"), the laugh window has closed with a lazy thud.

If you're wondering why on earth Jack Nicholson would be making Adam Sandler sing "I Feel Pretty," you're not the only one. It's the kind of joke that relies on its incongruity for laughs -- it's detached from everything except its own desire to please, and "Anger Management" is filled with similar gags. Nicholson plays Doctor Buddy Rydell, a surly, threatening anger-management specialist of dubious qualification. The ultra-meek Dave Buznik (Sandler) has been plunked into his care by a court judge (played with earthy dryness by the late, and wonderful, Lynne Thigpen) after the requisite pileup of ridiculous coincidences. The big joke, of course, is that Dave is hardly a mass of anger; if anything, he's one of those guys who takes things in stride to the point of being a pushover.

And ideally, that should make every dust-up between him and Buddy -- as when Buddy cranks up the therapy level by moving right into Dave's apartment, or when Buddy urges Dave to pick up a girl in a bar by telling her about the impending explosion in his pants -- even funnier. But it doesn't. By the time we see Buddy moving in on Dave's girlfriend Linda (Marisa Tomei, appealing as ever but almost completely wasted here), who falls for him after he pays her a few slimy compliments, the envelope has been pushed so far that it's just a saggy paper bag.

To make "Anger Management" work, Nicholson and Sandler should have the chemistry of a great romantic-comedy team. They have something, but it's not quite that. One of the problems is that, while Nicholson is just being Nicholson (at this point, all he has to do to give this type of performance is uncomb his eyebrow hairs a little), Sandler is working hard to become something a bit more than just Sandler.

Sandler has always gotten a bum rap, and not even his searching, ardent and delicately odd performance in Paul Thomas Anderson's sideways romantic musical "Punch Drunk Love" has helped much. I'm not a huge fan of Sandler's comedies; I have to admit that I've seen only two or three of them. But even in the movies that were chores to sit through ("Big Daddy"), I've often found Sandler sort of shyly likable and just threatening enough, under the surface, to be interesting. He blurs the line between being the wholly regular guy and the weird kid who's likely to come out with a zinger that makes no sense. He's both the most affable kid on the block and the playground outcast.

Maybe that's part of why Sandler's audience loves him so much -- he's willing to make himself look freaky and awkward to get a laugh, something they're not willing to do themselves. And say whatever you like about him, but even when he's playing dumb humor, Sandler never makes himself superior to his audience. That's made him a very rich man, but it has certainly hurt him among critics and "discriminating" audiences. It's practically a national pastime to hold Sandler personally responsible for the stupidity of his audience. I can't tell you how many letters I've gotten over the years, after panning this or that art-house snoozer, that run along the lines of "I'll bet you're really looking forward to the next Adam Sandler movie" -- a taunt that rivals "Your mother wears army boots" for acerbic wit and originality of thinking.

Sandler is more whipping boy than waterboy. But between him and Nicholson, he was the one who kept me even remotely interested in "Anger Management." I happen to like his half-zonked-out line delivery. He's often half a beat behind the rest of the world, like a guy whose best friend is the snooze button on his alarm clock. At his best, he can make the dorkiest joke wonderful. When Buddy praises Linda, who's a poetry teacher, for one of her poems by crooning, "Shades of Emily Dickinson," Sandler's Dave stems the creep of Buddy's slime with his pure, guileless enthusiasm: "I loved her on 'Policewoman'!"

"Anger Management" is filled with cameos, though I'll give away only one (John Turturro plays an unnervingly amusing halfwit thug), since seeing who pops up and where is much of the meager fun that "Anger Management" has to offer. But then, "Anger Management" feels like a setup right from the start. I insert the obligatory spoiler alert here, not because I'm going to give away any specifics, but only because I have to note that one of the things that makes "Anger Management" so unfunny is that you never feel it's the universe that's playing this long practical joke on Dave. It always feels as if someone, rather than merely the randomness of existence, is working against him. "Anger Management" takes place in a world where bad stuff can't just happen for humor's sake; everything has to be explained at the end. For instance, by the movie's end we're made to realize that the supposedly hilariously zany logic of Buddy's making Dave sing "I Feel Pretty" was intentionally zany. Who'da thunk it? When a comedy's ending actually undoes everything that made it even the tiniest bit funny to begin with, you wonder why you ever bothered to plunk yourself down in that seat. It should be enough to make you want to throw something at the screen. The problem is, it isn't.