Kurds swarm into Kirkuk and take hammers to a hated statue of the dictator. 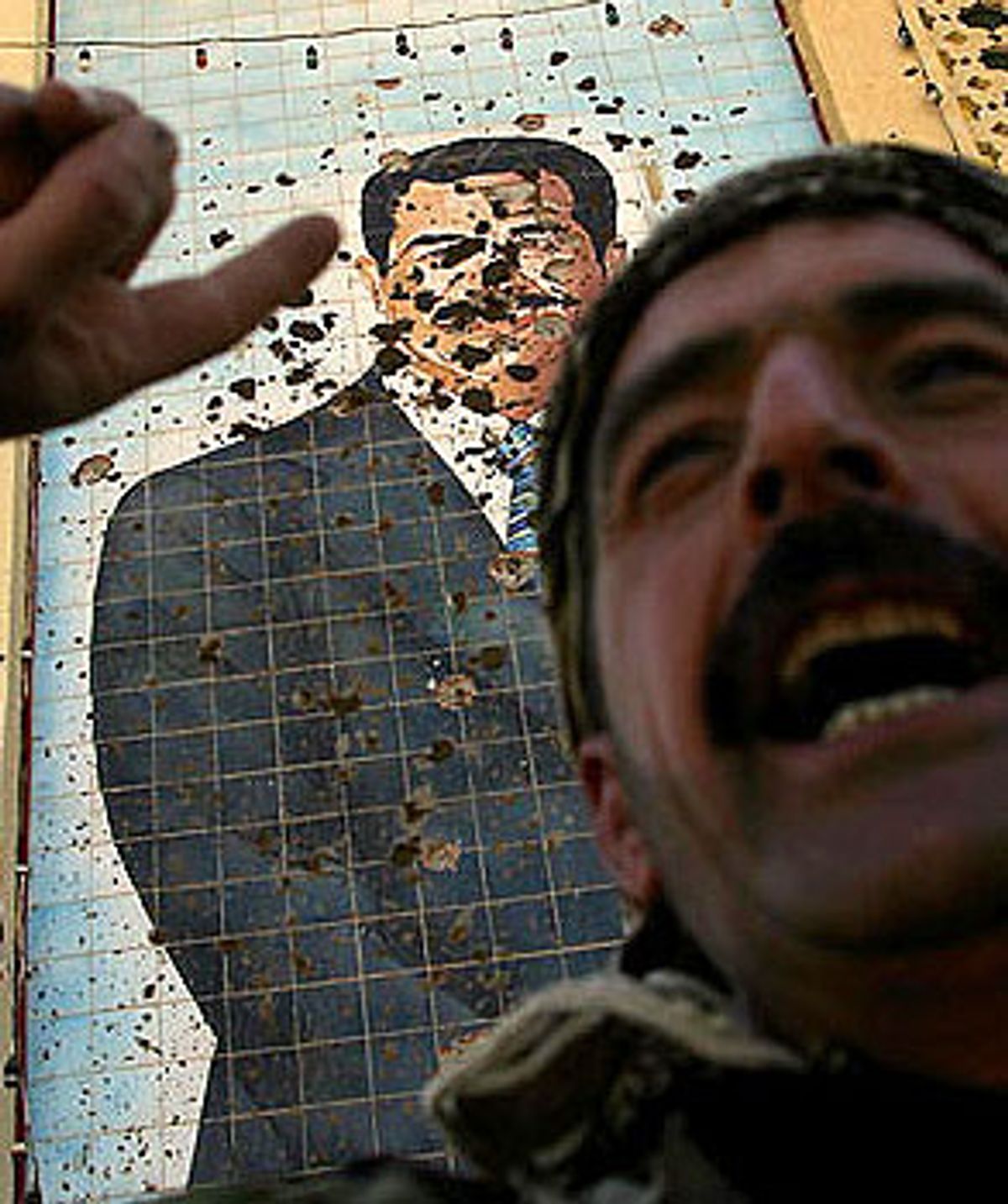 The people of Kirkuk had no heavy equipment to pull down a 30-foot bronze statue of Saddam Hussein Thursday afternoon, so they used their bare hands. The statue presents Saddam in Bedouin dress; someone spray-painted "USA" in black letters on the base. The regime had erected this image only a year ago, and Saddam placed it in a small park in the center of a busy city intersection.

The statue was meant to be worshipped, and there are many others like it in Iraq. At the rate they're going, they will not last long. The crowd of several hundred people around the statue were not worshipping it when we arrived.

One man in his 20s showed me how he bloodied himself trying to destroy the monument with a hammer. "I boxed him in the head and he made me bleed," he said, and held out his hands for me to inspect -- the kid was unbelievably proud of martyring his hands on Saddam. Then he climbed up to the statue's neck and beat him around the head and the eyes. When this was not enough, the young man and his friends painted the face red, and the paint resembled blood -- a nice touch.

The statue boxer and each of his friends had a green strip of cloth tied around their heads -- the official color of the Patriotic Union of Kurdistan -- but they did not have weapons. They were probably not members of that political party, but wore the green strips of cloth that day as a kind of uniform, to show the people of Kirkuk which side they were on. The statue boxer found a hammer somewhere, and when he struck the surface, it bounced off. After a depressing number of blows, he cracked it and finally knocked a small piece from the statue.

The boy struck again and the hammer fell, disappearing inside the new hole. Scores of others threw any available piece of debris at the head -- chunks of concrete, glass bulbs -- all of which fell back into the crowd. When the statue didn't give in, the crowd tried to pull it down with steel wires around Saddam's neck, but that failed, too -- they had nothing but their hands on the ends of the cable. "Look, Saddam is being pulled like a donkey," one amused Arab man said after seeing the noose around the neck. And so the cast bronze Saddam remained upright at the center of a cyclone of hurled rocks and garbage. The people shouted and cheered with joy and hate.

Then the crowd had a new idea: The young men standing on either side of the giant figure began to rock it back and forth. It took them a few minutes to get the rhythm right, one side pushing while the other waited for just the right moment to push back. We heard a shriek, and the metal became fatigued and bent, until the thing collapsed in a mangled pile. It went over slowly, like a sinking ship. As it teetered, the crowd of several hundred people, Arabs, Kurds and Turkomen, shouted in unison. The young men got out of the way just in time, and when the statue hit the ground, they danced on its head and body and beat it with their shoes.

The statue weighed tons, but when it collapsed, we could see it was hollow. We couldn't hear the noise of it hitting the ground; the crowd's cheers drowned it out.

Kirkuk itself fell when the Iraqis retreated or melted away, and the peshmerga simply showed up in battered pickups and taxis. The Iraqi army units surrounding the city had quit; they'd beat it out of town; they decided that war was not the answer. A friend who saw some Iraqi soldiers surrender said they were grinning ear to ear as they turned themselves in. They left their vehicles and tons of weapons lying in fields for anyone to pick up, and the Kurds were scrambling to nab the equipment.

Once the peshmerga learned that the city was open, they instantly rushed in to fill the power vacuum. We followed them blindly. As we drove down the road from Arbil, we saw people in cars waving bunches of yellow wildflowers out the windows -- a sign of spring, and a celebration of all the liberated Kurdish towns and villages.

At the village of Dibes, there were no checkpoints, and the soldiers there told us that the way to the city was open. They were all so happy they could barely handle it. When we started our approach to the city, the Kurdish soldiers weren't tense; if anything, they seemed ecstatic to be fulfilling what they saw as their ethnic and national destiny. We were worried that we would all die of happiness because the soldiers weren't paying attention to the security situation ahead. As the convoy raced toward the center of the city, we started seeing armed men without any particular affiliation -- not peshmerga, not regular Iraqi Army. Not hostile. Just newly minted gunmen of indeterminate loyalty.

The peshmerga occupation of the city was haphazard and inconvenient for the Americans, but the Kurds of Arbil and Suleimaniya moved in anyway -- they were seizing their lost capital, and saw an opportunity that wouldn't come around again. The moment they had Kirkuk under their control, Kurdistan became, if not a wealthy statelet, then at least one that was comfortably well off, with billions of dollars in potential oil revenue. Outside the city there are massive oil fields that will produce for years.

For the participants, the Kurdish occupation of Kirkuk was almost deliriously giddy. But it also produced a feeling of sick dread in so many of us here watching the events.

On Thursday, Turkey threatened to invade northern Iraq if the Kurds did not withdraw from Kirkuk. If Turkey made good on the threat, there would be new fighting between third parties in a country under U.S. military occupation. Someone called it a "war within a war," and the phrase is catchy. Turkey has considerable military resources on its southern border -- at least 15,000 troops. Many Kurds in northern Iraq are alternately incensed and anxious about Turkey's statements. As a result there is a frenzy of deal-making.

After a moderately creepy drive down an unsecured road, we found ourselves a kilometer from a burning oil well -- a twisting gout of flame with black shrouds of smoke. Then we got lost in the desolate suburbs of the city and drove badly, distracted by abandoned buildings and places where snipers might hide. The peshmerga we were following were lost as well, because Kirkuk is a big town, with a million people in it, and the outlying streets go in random directions. We passed trucks brimming over with peshmerga who had stopped for roadside consultations on the right way into the city.

The Americans entered with the Kurdish forces, but I never saw them working. This was not surprising -- there were very few U.S. soldiers in that first wave of fighters driving into Kirkuk, and they kept a low profile. When we pulled into town, we heard fighting in the west of the city, but regular people were out and walking around like nothing was wrong.

At the first big intersection, we watched an old woman beat the head of a Saddam statue with a piece of concrete. A few minutes later, she put her hands up to God, with tears running down her face, and kissed me on the cheek. We drove to the main square where the Bedouin Saddam waited.

While I was watching the statue destruction show, I suddenly saw Shahab, a resident of Kirkuk, in the saddle of a gray horse. It blew my mind that there was a man on a horse while Kirkuk was going through the throws of liberation. What was that man doing on a horse?

While he grazed the horse on the grass growing around the statue, I asked him what he was doing in the saddle while Bedouin Saddam was getting a historic beating. Shahab said, "Saddam wouldn't allow me to bring my horse here until now, so now I can bring him here to eat. I also want to tell you that in 1988 my aunt and her son disappeared during the Anfal campaign. The secret police came and took them and no one ever saw them after that. Saddam killed them." Shahab told me the names of the disappeared: Zara Jamir and her son Ferman Azadi.

Imagine a million conversations at once, all pointing to such events, all stemming from the same hideous system. I felt after listening to them that the regime had destroyed a member of every Iraqi family, because in a crowd of hundreds of people, every one of them that I spoke to near the statue had terrible stories, communicated in telegraphic bursts.

Near Shahab grazing his old nag on Saddam's grass was a man pissing on the dictator's symbolic grave. People from Kirkuk were doing what they needed to do after decades of Saddam. Some had planned their rituals out, like Shahab; others were spontaneous. Men danced Kurdish and Turkish dances, winding their arms across their shoulders and moving in a circle. As the day went on, families came out with their children, everyone wearing their best clothes.

A wave of looting began to ebb; I thought that the looters had kept themselves to Baath Party offices and stores, but it was impossible to be sure. On the way out of town, a man was rolling a giant galvanized water tank down a hill. It made him seem like an ant. Other buildings were burning.

Everyone at the Saddam statue wanted to apologize about the looting, because they were ashamed to see their city collapse into lawlessness so quickly after the Baath Party pulled out of town. I don't think the bank was looted, but government buildings were fair game. And in a police state, everything is the government, so there were many places ripe for plunder. Once looters go into a place, they take everything, including electrical fixtures.

We stood in the center of joyful crowds in which older men wanted to give sweets to the visitors, women begged to make satellite phone calls, and earnest men wanted to make speeches about the importance of human rights. The Kurdish men standing on the marble pedestal waved homemade American flags with a few stripes and a few stars. They had taken strips of cloth and Magic Markered the stars and stripes on them. The men chanted and clapped, saying, "Thank you, thank you, Mr. Bosh."

Baravan, my Kurdish translator, watched Saddam come down and couldn't translate for a few minutes because he was overcome -- his circuits were blown. It seemed that Iraqis have a hard time believing Saddam's regime is gone until the likeness comes crashing down. Only with the destruction of their false god can they think of a new life.

In the late afternoon before the long drive back to Arbil, a student came up with an urgent question. "Please, mister, do you know when the American army is coming?"