"The Spooky Art" by Norman Mailer

In a new volume of advice to young writers, the great man of American letters weighs his own legacy -- and finds it wanting. 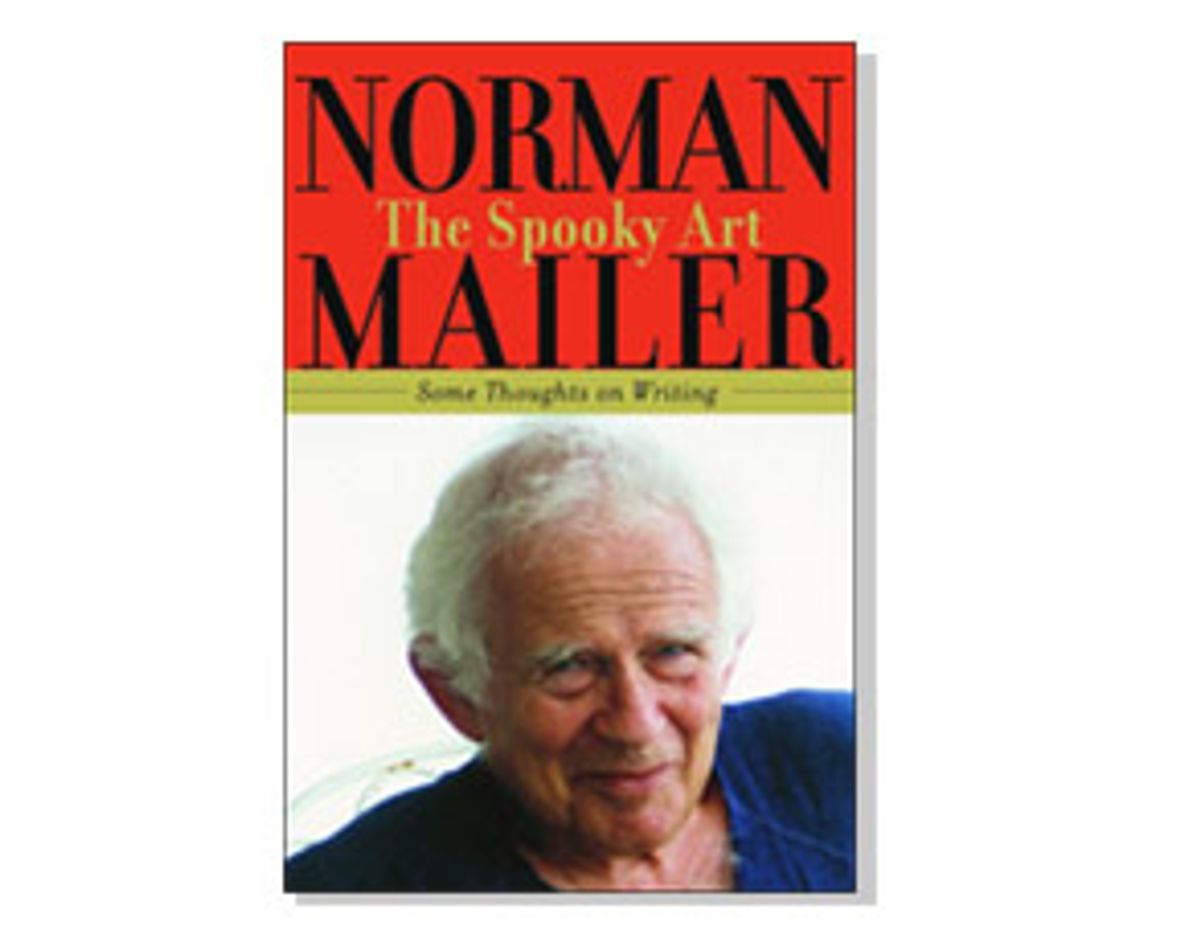 Fifty-five years ago, Norman Mailer published "The Naked and the Dead" and became famous. He has never stopped being famous, although these days his celebrity has less to do with what he writes than with who he is, or, for that matter, with who you are. For anyone born in the last 30 years, especially, Mailer is probably better known for his appearance in the Muhammad Ali documentary "When We Were Kings" than as the author of "The Naked and the Dead."

Now Mailer is 80, and the unspoken rationale behind his new book, "The Spooky Art," a selection of essays that deal loosely with writing, is that we are in the retrospective stage of his career. He remembers saying in 1958 that he would settle for nothing less than making a revolution in the consciousness of the time, and acknowledges his youthful hubris. "I certainly failed, didn't I?" he writes. "At the time I thought I had books in me that no one else did." It is not the fighting talk we're used to from Mailer, who always seemed to set such a high benchmark for himself only to be thwarted by the scope of his ambitions. He is a writer of whom it's often said that no one could "dare" write the kinds of books he does -- a diplomatic way of saying that his choices are perverse and sometimes wrong.

In "The Spooky Art," Mailer gives generous ground to his critics. By his own admission, "The Naked and the Dead," against which his later novels were measured and frequently found wanting, was "sloppily written [with] hardly a noun in any sentence not holding hands with the nearest and most commonly-available adjective." This generous self-criticism sets the tone for a book ostensibly targeted at "young writers who wish to improve their skills," but predominantly concerned with the trial of being Norman Mailer. What a trial it is, too -- especially at the hand of the reviewers whose opinions Mailer is compelled to read in spite of himself: "It would be like not looking at a naked woman if she happens to be standing in front of her open window," he writes. "Whether ugly or lovely, she is undeniably interesting under such circumstances."

Well, maybe, but the metaphor speaks volumes about Mailer's macho burlesque. Who uses language like that anymore? Mailer, you feel, does it out of stubborn pride; to do otherwise would be an act of submission. Just as his books feel more lived than imagined, so the way he writes reflects the man he is. When Kate Millett castigated him as the arch-villain chauvinist in her 1970 feminist polemic, "Sexual Politics," his reaction was typically overblown: He wrote an entire book to refute her. Millett, he said in "The Prisoner of Sex," was a pug-nosed "literary Molotov," and the "Battling Annie of some new prudery." A subsequent issue of National Lampoon caricatured him as Norman the Barbarian, fighting the forces of feminism and the Bitch-Goddess Media.

This is all great fun for the tabloids, but has left little time for Mailer to be a novelist. Many of his books have the feel of a man continually distracted, not only by the confusion of contemporary life but also by the confusion that reigns in his own mind. Gore Vidal, a writer with whom Mailer shares a cynicism about the state of fiction, thought it doubtful that Mailer should be writing at all: He was too much a demagogue, Vidal once wrote, with no precise mission except that dictated by his ever-changing temperament.

Mailer's retort, at least in "The Spooky Art," is that he's not the one being fickle; it is the media, which jerks novelists in and out of fashion as it sees fit. Joan Didion, for one, seems to agree, arguing that contrary to the critics, Mailer has written the "big book" at least four times, including both "The Deer Park" and "An American Dream," novels that were largely derided at the time of their publication.

The truth lies somewhere in between. Mailer once described himself as "a terribly slack man," and it may be the pithiest, most astute observation he ever made. He is a beautiful writer but a poor editor, and his sprawling novels sometimes feel like exercises in literary masochism. Although he has produced his fair share of great books, the many duds are magnified by his keen sense of expectation. Too often they come saddled with advance hype as his definitive masterpiece, only to drop stillborn onto the birthing floor, defeated by the scale of Mailer's ambition. He thought "Harlot's Ghost," his vast, 1,300-page novel of the CIA, seven years in the writing, would be his big one. It wasn't. (Mailer blames this on bad timing; in 1991, when the book came out, the Cold War was out of fashion.) Instead, the book that many now consider the landmark of its era is his "An American Dream" (1964), a proto-"American Psycho" in which Mailer's protagonist, Stephen Rojack, doubles as the novel's antagonist, at once sympathetic and despicable. Like Bret Easton Ellis' Patrick Bateman, he gets away with murder most foul.

Likewise, Mailer entertained high hopes for "Ancient Evenings," a sprawling epic set in the Egypt of Ramses, which took even longer to write than "Harlot's Ghost." As a break, he took on the assignment of writing "The Executioner's Song." No one now reads "Ancient Evenings," which Ian Hamilton, in the London Review of Books, found "bloated and distorted by Mailer's infantile megalomania." But "The Executioner's Song" -- Mailer's dazzling epic of the life and death of Gary Gilmore, executed in Utah in 1977 -- has become his greatest testament. Even today it has a remarkable urgency and topicality that will surely outlive most of Mailer's novels.

One reason for the discrepancy is that while Mailer is a master of language he is rarely a master of plot. In "The Spooky Art" he makes a virtue of the fact, arguing that plot constricts the writer. In fact, his books work best when the plot is provided by historical events, as with "The Executioner's Song," in which his hyperattentive eye for detail has the vigor of his best fiction, without the flaws of the worst. He called it a "true life novel," and his refusal to judge his subject gives it a depth and integrity all the more powerful for what it seems to say about American life. You can feel Mailer's sympathy for his characters throughout, but it's a severe sympathy that never skates over Gilmore's faults.

Mailer was well-equipped to write about violence; as a writer the metaphor he seems to reach for most often is that of the boxer, and his novels have a tendency to romanticize violence as a reflection of male virility. There are contradictions. Mailer is always creating homosexual characters (and in the case of his Picasso biography, inventing homosexual encounters) and when not in Brooklyn, he makes his home in the gay summer resort of Provincetown, Mass., at the tip of Cape Cod. If there is a juicier irony, I'd like to know what it is. Even his old sparring partner, Gore Vidal, is now a friend and sourpuss-in-arms -- literature's Grumpy Old Men, reminiscing, according to Mailer, "in mutually sour fashion over the various pirates, cut-throats, racketeers, assassins, pimps, rape artists and general finks we had encountered in our separate travels."

Although not even Mailer would be so presumptuous, you get the feeling that he identifies most with Tolstoy, whose books, he notes approvingly, "carried to us an image of a huge landscape peopled with figures who changed the landscape." In spite of his valiant efforts to chronicle his nation's own social and political landscape in the 20th century, he thinks American literature is still waiting for its "War and Peace," and is not optimistic about the prospects. Contemporary literature is his blind spot; Jonathan Franzen, Michael Chabon and Alice Sebold, among others, have revived the "spooky" art of the literary bestseller, but Mailer is too preoccupied with himself to have noticed. While he concedes, for example, that "Franzen writes superbly well sentence for sentence," Mailer is "not happy with the achievement ... since rare is any page in 'The Corrections' that could not be five to ten lines shorter." Rich indeed, from a man whose 1,300-page "Harlot's Ghost" closed with the words "to be continued." (We're still waiting.)

George Orwell once wrote that no decent person cared twopence for the opinion of posterity, but you cannot read "The Spooky Art" without concluding that Mailer cares all too much (and too humanly) for the legacy he leaves behind. It explains why he's so petulant toward his critics, who will influence the final determination. In one essay he recalls being at a party and spying Philip Rahv, a reviewer who had penned a damning verdict of "An American Dream." After deliberately squeezing himself onto the sofa beside Rahv, Mailer is triumphant. "He was in an absolute panic, waiting for me to Strike," he writes, as if this were a measure of his worth. "Rahv had his virtues, bless him, but physical courage was not one of them." Later in the same chapter he wistfully regrets the fact that he never "punched out" a reviewer. There may still be time, if he's quick about it.

Aaron Hicklin is editor in chief of Black Book.