Is Bush a stuffed pussy?

What the latest trend in taxidermy can teach us about foreign affairs. 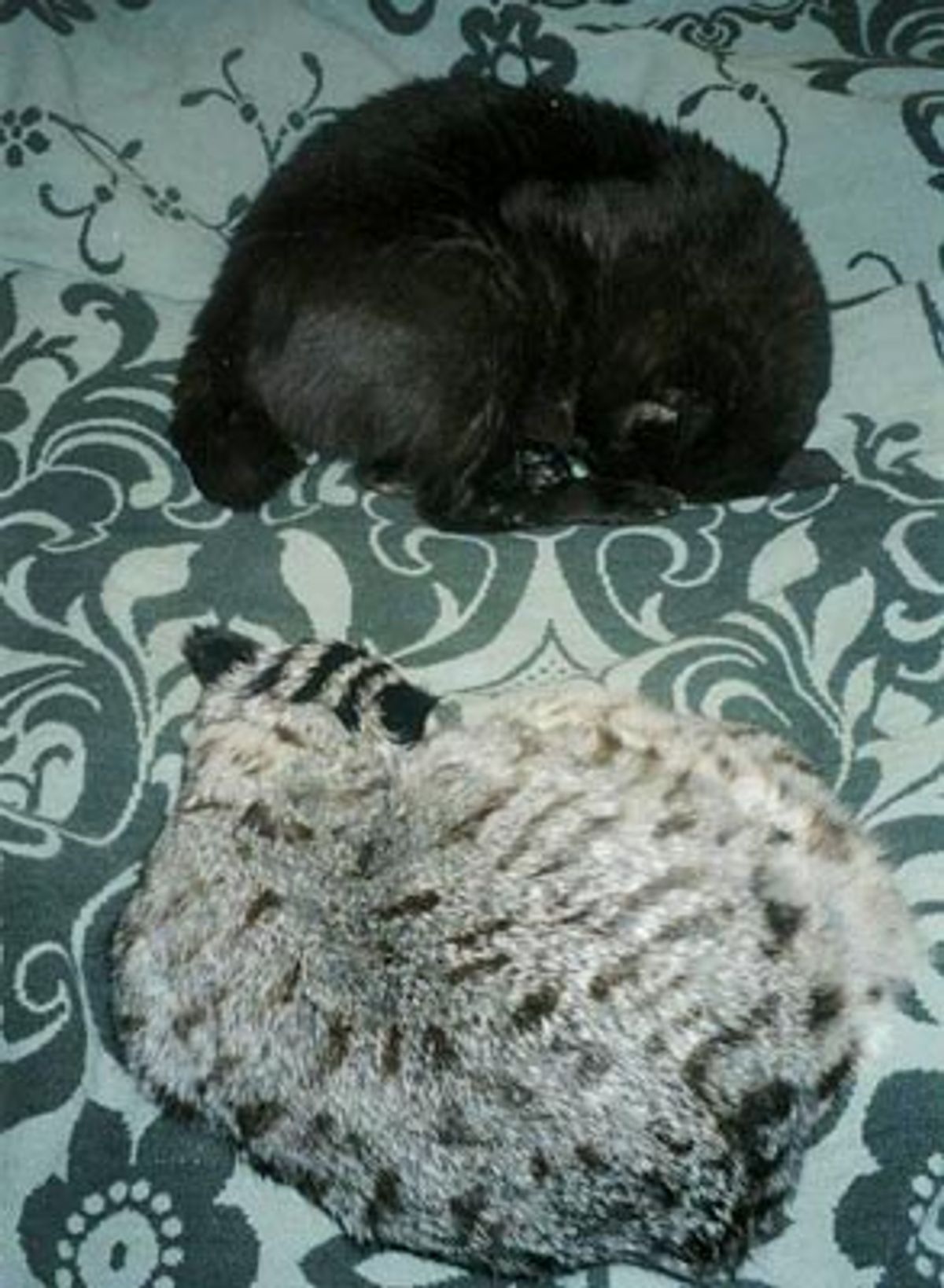 I was walking to my friend's house recently, thinking about the statue of Saddam that had just toppled over in Baghdad, and how fitting it was that it was hollow inside. I passed the pet store on her corner when I noticed a brilliant tabby napping in the window. Aww. I tap, but the cat's so blissed out it doesn't wake. I'm thinking, lovely you, so used to "tap-tap-tapping" by bothersome wankers, you're quite numb to it. So I go inside the store because I must touch the cute kitty cat, give myself a bit of calm amid my anxiety about the war.

The owner's wearing a grin.

"Coming in to pet the cat?"

So I pet the little cat. But when my hand touches it, the little cat feels stiff, and I scream. For a second I thought it might have baked dead in the sun, and the owner didn't quite know it yet.

These stuffed dead cats are for sale; they cost $29.99, these perfect replicas of napping kitties. The store owner tells me the biggest customers are cat fanciers, the same people whose refrigerators and sweat shirts are adorned with pictures of cartoon kitties in sailor suits, or real ones sporting humiliating boas and pert straw hats. People with allergies to cats buy them, too. Also lonely old ladies who love cats but can't take care of them. Or just plain old weirdos who like the prop drama potential. They stuff them in Christmas stockings or decorate their mantles with this kitschsy carnage.

But how is the cat, um, manufactured, I ask? He tells me it's made of dyed rabbit fur pulled over a Styrofoam sleepy kitty form, which has been tempered and tortured into the shape of a happy tabby. You've likely seen cheap miniature equivalents in every Chinatown across the continent. Those little puffs of fur are marketed as cat toys or key chains, but whatever you call them, they're one horrific karmic invention. And yet this cat in the window is a work of art. With its rubber nose, whiskers and closed eyes, the repose is so brilliantly sculpted, all spinal hills, and tucked tail, and jutting shoulder bones, you can actually see the damn thing breathing. At least I did, or maybe it was window glare.

Now, I'm no PETA spokesperson, but I was left indescribably saddened -- miserable even -- by the thing. It made me nauseated to look at it, to touch it, to even think about it.

But I bought it anyway, thinking it might be a good companion for my cat, Chicken. Or maybe a way to fool my friends with the taxidermic equivalent of a fart cushion. I paid the sick man and was forced to carry the Cabbit (or is Rabbiten better?) in the store's translucent bag. My furry quarry pressed up against the plastic like a sick joke. I avoided eye contact with the people passing by. They were staring. Can you blame them?

My friend Joanne screamed when I showed it to her. Then she touched it and shuddered.

"Eww, get it out of here," she said. When I asked her what exactly repulsed her about my Cabbit, she stammered, "I don't know. It's just, it's awful, isn't it? It's just so awful."

The poor bastard, I thought, placing it lovingly back in the bag.

When I got home, I gently removed it (static cling, gross) and put it on my couch. I even pressed it down into the pillows to give it the impression of (dead) weight. Then I petted it. (How could you not?) Then I gave it a name, Poor Bastard. Then I wondered how it died, squeezing my eyes against the image of an oblivious bunny being gutted by a feral tom.

Can you imagine a sicker fate than being annihilated by the thing you fear the most, only to have your sorry skin wrapped around the form of your greatest predator? It's no small fear. Smart people use more sophisticated versions of this argument when talking about American imperialism. They say the "cat" is America, and the "rabbit" is Iraq. The cat kills the rabbit, it skins the rabbit, then hands the skin back to the rabbit, under the condition that the rabbit models itself on the victorious cat. Dovish pundits, those who were against war with Iraq, question George W. Bush's motives, citing Nicaragua, Iran, the Philippines and Panama as past victims of this kind of American political and cultural taxidermy. America topples the "dictator" or "madman" and places its own "puppet" in power. Saddam Hussein will be replaced by someone. This person will appear from the outside to be good for Iraq, certainly better than Saddam. But democratically elected, benevolent, kind or otherwise, what is at his very core will always remain unknowable, and uncertain. And America will be back at it again, installing another poor bastard to helm an increasingly angry, precarious country.

Perhaps I am making too much out of this. But I'm guessing this fear is at the core of the cringe factor people experience when they come in contact with my Cabbit, Poor Bastard. Taxidermy is against human nature. Because no human wants to toy with the integrity of their own core, or to be cloaked in anything but their own authentic skin. It is what we all strive for as humans.

But I tell you who's not fooled: Chicken, my (real) cat. I thought she'd be scared of Poor Bastard, cowed by its creepy presence. But she took it in stride. She took one look at its sleeping form, inched closer, sniffed, and then bit down hard on its beef-jerky ear. When she started dragging Poor Bastard toward her, I knew if I didn't intervene I'd be vacuuming tufts of fur for weeks, months, years. Because Chicken sees Poor Bastard for what it is, not another cat, not a roommate, not even a little buddy. Poor Bastard is not like her, because Poor Bastard is a rabbit, and Chicken cannot wait to sink her teeth into it, to rip it to shreds, to kick it around the room, and then to simply, completely annihilate the thing. And it's only natural, because that is what animals do to each other, don't they?

Lisa Gabriele is the author of the bestselling novel, and "SECRET Shared" which she’s written under the pseudonym, L. Marie Adeline. She is also the author of "Tempting Faith Di Napoli" and "The Almost Archer Sisters" under her own name.