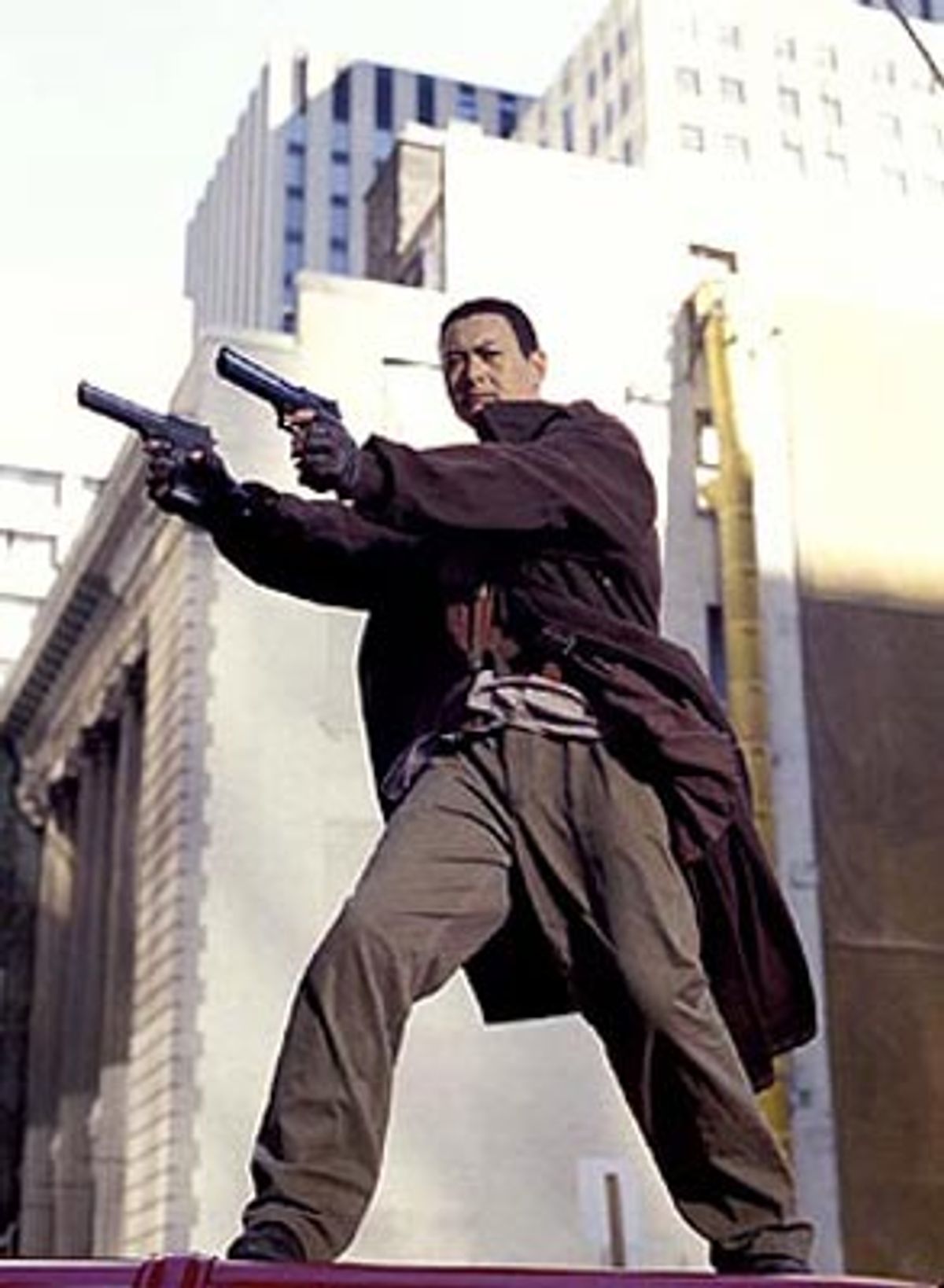 You couldn't make a case for "Bulletproof Monk" as a superior example of movie craftsmanship. The narrative is as slapdash as it is in most big-budget action movies. The images lack luster (surprising since the cinematographer is Stefan Czapsky, who has done striking work for Tim Burton and on Danny DeVito's wonderful "Matilda"), and the martial arts sequences have been edited (by Robert K. Lambert) with typical Cuisinart busyness. So why is "Bulletproof Monk" so much more enjoyable than the usual run-of-the-mill action junk? Why does it send you out of the theater in such a good mood?

"Bulletproof Monk" absolutely refuses to take itself seriously, and it's precisely how it refuses to take itself seriously that makes all the difference. Striking an ironic stance has become the way for commercial movies to get away with being crap; simply acknowledging cliché has become a way for movies to claim that they are superior to the rest of the junk out there.

Yet "Bulletproof Monk" never winks at its outlandish plot twists and even more outlandish dialogue. The filmmakers, director Paul Hunter and screenwriters Ethan Reiff and Cyrus Voris, don't apologize for making a far-fetched action movie. And for all the haphazard qualities of "Bulletproof Monk," what they've come up with is a genuine, unembarrassed example of the kind of naiveté that can return us to the movies as a place of make-believe.

The presence of Chow Yun-Fat links "Bulletproof Monk" to Hong Kong movies. American movies have tried for years to come up with equivalents to the kinetic genre-scrambling of Hong Kong movies (which in turn are indebted to Hollywood). They've appropriated Hong Kong directors and stars, but often the result feels even more soulless than the usual Hollywood product. The stunts and effects and hyperbolic firepower lifted from Hong Kong, instead of liberating Hollywood pictures, only made them seem more calculated. (The exception is "The Matrix," which seemed to be inventing a whole new genre as you watched it.) Conversely, a self-awareness has started to creep into Hong Kong movies, like the recent "Fulltime Killer" in which super hit man Andy Lau stages his killings as homages to action movies. (He pins a guy's hand to a bar with a fork and berates him for not having seen Alain Delon in "Le Samourai," and dons a Bill Clinton mask to reference the bank robbers in "Point Break.")

What distinguishes Hong Kong movies at their best (and sometimes even when they're just passable) is that they don't feel as if they've been made by or for people who have become jaded. Sometimes, their nearly incoherent story lines actually make it easier to slip into them on a make-believe level. I don't want to inflate my pleasure in them by making claims for all of the Hong Kong pictures I've enjoyed as works of art (though I'd certainly make that claim for some). But collectively Hong Kong cinema has been a high-water mark for the art of being a moviegoer. To put it simply, Hong Kong movies have allowed us to be audiences again, to believe in what's on the screen for the few hours we sit in our seats because the people on-screen believe in it.

In the great movie renaissance of the 1970s, filmmakers and audiences moved beyond genre films. Our current predicament is far worse; directors aren't challenging the conventions of genre but they haven't mastered the craft of genre. The spirit of fun seems gone from many commercial movies, replaced by the crassest kind of profiteering.

In the last 15 years or so, Hong Kong filmmakers have often seemed to be the only ones doing the classic Hollywood genres with anything like the spirit of classic Hollywood. I don't just mean much-praised pictures like John Woo's "The Killer" ("Magnificent Obsession" as a gangster film) and "Hard-Boiled," but also lesser-known ones like Peter Chan's romantic drama "Comrades: Almost a Love Story," featuring a great movie-star performance from Maggie Cheung, and Tsui Hark's "A Better Tomorrow III: Love and Death in Saigon," which puts nearly every recent American historical melodrama to shame. Watching these movies, for me, at least, has been like discovering that parts of your heritage you believed had vanished are actually alive and flourishing in a foreign land. You feel at first disoriented and then right at home.

This may help to explain why you can walk into "Bulletproof Monk" in a foul mood (like I did) and come out feeling refreshed and happy. Chow Yun-Fat plays the Monk With No Name (a nod to Clint Eastwood's Man With No Name, in the Sergio Leone westerns), who has been protecting an ancient scroll for 60 years. The scroll stops time for whoever protects it, giving them the strength and appearance of youth, and will also allow whoever reads it to control the world in whatever way they choose. Since 1942, the Monk has been on the run from a now decrepit Nazi (Karel Roden, as familiar and terrible as all the hissing Nazis from '40s movies), who wants the sacred parchment to regain his own youth and to establish the master race on earth.

The Monk has wound up in America, where he encounters a young street thief named Kar (Seann William Scott), who may be the chosen one to inherit his mantle. Kar tells the Monk he has learned his knowledge of martial arts from studying at the Golden Temple. He's referring to the rundown Chinatown movie palace where he's the projectionist. (In one of the best jokes, the Monk realizes Kar has learned his moves from martial-arts pictures and says, "No wonder your technique is so sloppy.")

There is also a bad girl called, for those of you who have trouble with names, Bad Girl (Jaime King, the actress and model formerly known as James King), who keeps crossing Kar's path and is a figure of mystery. Bad Girl is as much at home with a street gang who hang out in an abandoned subway tunnel as she is at the opening of a human rights museum.

The movie is just as silly as that description sounds. It's also resolutely good-natured, with nice character bits from the Japanese actor Mako (as the owner of the movie theater) and from Suresh John as a Punjabi cab driver. The director, Paul Hunter, a veteran, alas, of music videos and commercials, may not have the chops to keep the action sequences clear, but he knows how to keep them free of potential sadism. (If your kids are over 10 or so, "Bulletproof Monk" is a fun outing for all of you.) The excitement here isn't from the punches and body blows but from the speed of the combatants as they execute impossible leaps and fly through the air.

An early scene, where Kar faces down that subway gang, is carried off with some wit (much of it thanks to Marcus Jean Pirae as the gang's strutting Cockney leader, Mr. Funktastic -- he even has his moniker tattooed across his chest in gangsta script). The wit in the conception of the scene where Kar and Bad Girl meet and do flirtatious battle -- combat as foreplay -- saves it from the sloppy editing. And Hunter isn't so addicted to rapid-fire technique that he can't take time out to appreciate King's delicate snub-nose profile.

Models who turn to acting are always an easy target for the smartasses -- whether moviegoers or critics -- who want to get off a few easy laughs at their expense. There's no way of telling, from "Bulletproof Monk," whether King can act. In action movies, though, the way a performer moves is the performance, and on that not-inconsiderable level, King is a lot of fun to watch. She's got a dancer's slim build and kohl-lined raccoon eyes, and there's something improbably tough about her sleepy little face, the way there was whenever Dennis the Menace screwed his mouth into a tough-kid pout. Watching her twirl and kick when Bad Girl flies into action, or put reverse moves on Scott, affords the ticklish pleasure of seeing someone who has found her niche.

The real romantic presence here is Chow Yun-Fat. And in any movie with Chow, how could it be any other way? A colleague of mine speculated that, in terms of the years he's been working and the success of the movies he's been in, Chow may be the top movie star in the world. Whether that's accurate or not, at times Chow has felt like the truest movie star around. If Hong Kong filmmakers know how to make American-style movies, they also know how to find performers -- Chow, Jackie Chan, Maggie Cheung, Michelle Yeoh, Tony Leung, Brigitte Lin and Anita Mui among them -- who, in terms of sheer charisma and style, let you bask in the glory of watching movie stars.

Watching Chow points up the difference between a star who knows how to be fully attentive and alive when he has reined himself in and a stiff like Harrison Ford who stands around taking up space. Everything Chow does is shot through with slivers of humor. Even when he's in his silent and commanding mode, you get the sense of someone for whom being in front of a camera is the most natural thing in the world. And he possesses what I can only call -- and I know it sounds corny -- the inner light you see in some movie stars, the ability to allow themselves to be transformed by an emotion that lifts the movie to a place where the audience doesn't feel silly or ashamed for responding.

That's what Chow emanates at the end of the movie, which wraps up the story in the loveliest way possible, honoring both the responsibilities he passes on to his young successor as well as the romance we want from a movie. You can point to all sorts of failings of craft in "Bulletproof Monk," but you can't find a failing of spirit. It leaves a light, sweet aftertaste.