Christopher Guest and his "Best in Show" cohorts are back, mocking the survivors of '60s folk music in this work of sideways comic genius. 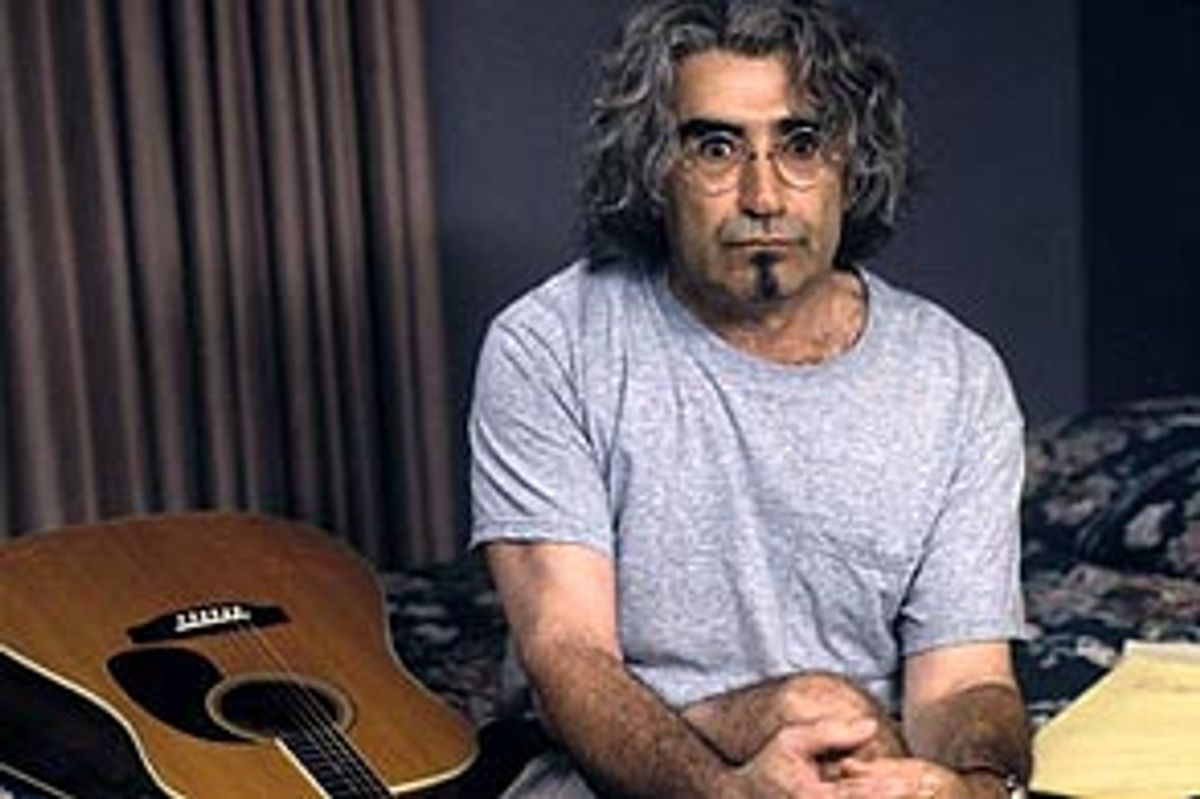 Dying is easy, comedy is hard and somewhere in the middle are Christopher Guest and the ensemble of actors with whom he's worked for years, who simply live on film. "A Mighty Wind," a documentary-parody about three '60s folk-singing groups who reunite for a memorial concert at New York City's Town Hall, is the third picture Guest has directed with these actors, whose core group includes Eugene Levy, Catherine O'Hara and Michael McKean.

The first of those movies, "Waiting for Guffman," had some ramshackle charm, but it moved along on wobbly training wheels; "Best in Show," a mockumentary about the high-stakes world of purebred dog competition, was funnier, sweeter and much more smoothly constructed, a comedy in which the director, the writers (Guest and Levy, who also wrote "A Mighty Wind") and the actors had reached pitch-perfect accord, their ears alert and all cocked toward the same silent whistle.

But "A Mighty Wind" tops both of those movies by subtly undercutting them: It's a fine-grained picture that goes for the sideways laughs rather than the straight-ahead ones. This is sketch comedy as method acting. When Levy and O'Hara take the stage as the long-estranged ex-husband-and-wife folk duo Mitch & Mickey to reprise their big hit song, about a kiss at the end of the rainbow, we're not thinking about how spot-on their comic intonation is, or about how accurately they've captured the flavor of the era's music. We're seeing a disconnected couple vanquish 30 years of alienation and distance -- just fleetingly -- by dusting off some old arrangements and re-creating a few harmonies that must have once been second nature to them.

We look at them and want to laugh -- it is, after all, Levy and O'Hara we're looking at, and their mere presence (the caterpillar expressiveness of Levy's eyebrows, the sneaky stubbornness of O'Hara's broad smile) is enough to put you in a giddy mood. But their characters, so wholly lived in, invoke something complicated in us: We see them not as silly old hippies stuck in the past but as acerbically nostalgic former lovers locked in separate compartments of the present. Their banter is funny and strange and disconnected, sidestepping every obvious laugh and going instead for the most rueful ones, the ones that lurk deeper inside us and are harder to draw out -- the kind of laughter that catches in your throat.

I'm still not quite sure how to parse the response that "A Mighty Wind" drew out of me. The setup sounds too slight to amount to much: After the death of beloved folkie superagent Irving Steinbloom, Steinbloom's son Jonathan (Bob Balaban, in a performance that turns anal-retentiveness into a kind of Dada poetry) decides to stage a memorial concert, starring the groups that Steinbloom so lovingly shepherded during his lifetime.

One of those groups is the New Main Street Singers, led by the perpetually grinning Terry and Laurie Bohner (John Michael Higgins and Jane Lynch, whose performances hit just the right degree of smug cluelessness), a candy-color-coordinated ensemble who pick and grin their way through numbers like "Potato's in the Paddy Wagon." (The one remaining member of the original Main Street Singers, played by Paul Dooley, is relegated to the background, quietly playing one of the group's dozen or so guitars.) Another is the Folksmen, a highly principled but virtually hitless outfit comprising Alan Barrows, Jerry Palter and Mark Shubb (played by Guest, McKean and Harry Shearer, respectively -- together again in a kind of "This Is Spinal Tap Unplugged"). And the third is Mitch & Mickey, whose two members, since their '60s heyday, have gone on to build new and separate lives: Mickey as the wife of a dopily cheerful catheter salesman (Jim Piddock) and Mitch as the shellshocked survivor of dozens of nervous breakdowns (when he speaks, the words march out in a single-file nasal monotone; he forces them out one by one on belabored little gusts of breath).

The concept might not seem like enough to support a complete movie. But "A Mighty Wind" never feels thin or belabored. Guest allows each character to breathe -- we get a good sense of what each one wants from this reunion. The New Main Street Singers, for example, are so aggressively ambitious they'll play anywhere; the Folksmen, well into middle-age, pretend not to care much, but they secretly hope the concert will rekindle their career -- you get the sense that real life never measured up even to the mediocre success they formerly enjoyed. (Success that might have been greater if their stingy record company had actually put holes in the center of their records. Although, as Shearer's Mark Shubb cheerfully notes, there was always the DIY approach: "If you punched a hole in 'em, you'd have a good time.")

Guest's mode of working is something like that of Jacques Rivette or Mike Leigh: He and Levy sketch out the characters and write a detailed plot outline, but leave the actual dialogue to the ensemble to improvise. "A Mighty Wind" proves the group has the process down to a mystical science: This is the sort of thing that comic actors can pull off only when they're completely in sync with each other. And the music meshes with the story perfectly. The models for the three groups were, most likely, the New Christy Minstrels, The Kingston Trio and the Canadian husband-and-wife duo Ian and Sylvia. But the songs aren't so much vivid facsimiles as impressionistic re-creations, and everything actually sounds good. Even the intentionally slick and overprocessed Mitch Miller-ite song stylings of the New Main Street Singers are weirdly seductive. They're like cheap folkie crack: You know they're bad for you, but you just can't break away from their allure.

One of the mysterious things about "A Mighty Wind" is that, aside from the exuberant and outlandish musical finale (which features a single line that had me doubled over -- a line I invite you to discover for yourself), I can't remember many specific moments that made me laugh. The jokes in "A Mighty Wind" are largely telepathic -- they seep in gradually. Much of what's funny about the movie comes from the distinctive look of each of its characters: Harry Shearer sports a chrome dome and one of those Amish-looking beards that looks as if it's hooked on behind his ears. Parker Posey, as one of the youngest, perkiest members of the New Main Street Singers, has a brief but fabulous sequence in which she maniacally strums a mandolin in front of a group of incredulous schoolchildren.

Fred Willard has a marvelous turn as the New Main Street Singers' not-all-there manager, who sports a spiky Billy Idol haircut that screams "I'm in with the In Crowd." And Jennifer Coolidge, as dim-bulb sexpot publicist Amber Cole, gets laughs even before she opens her mouth (as well as after -- she speaks in a bizarre pidgin-Latina-Swede accent that makes every line a killer). What is it about Coolidge? Even her cleavage is funny. And she pulls off one of the movie's great non sequiturs. When Mickey's husband, a model-train enthusiast, corners her at a party, she nods and smiles blankly and says, "Tank Gawd for the model trains, yeah. If they don't have them, they wouldn't have got the idea for the big trains."

But the most wondrous performances in "A Mighty Wind" come from Levy and O'Hara as Mitch and Mickey. These two form one of the most inspired pairings in contemporary comedy -- perhaps in all of comedy. Their inner compasses are almost eerily calibrated -- each finds his or her comic north in the other. And they play Mitch and Mickey as people who are both better off and yet somehow lost without each other. When we first meet Mickey, she's perched in her cushiony chintz-appointed living room (the shiny coffee table in front of her is adorned with screamingly tasteful china piggies), reminiscing about the old days. We see an old clip of her and Mitch performing; he comes off as cerebral, wooden and charismatic all at the same time; she strums her autoharp with upright schoolgirl earnestness.

Even as O'Hara explains how everything went haywire with Mitch -- and there's no doubt that her current life is a thousand times easier than the old one -- a note of wistfulness creeps into her voice. Later, when she fumes at Mitch for wandering off just minutes before they're due to hit the stage at Town Hall, you can see how much her sharpness cuts into him -- but you also get a glimpse of how her matter-of-factness must have been the chief thing that held him together.

Because Mitch is nothing short of a mess. Levy plays him as a shuffling, unblinking misfit with perennially untamed hair. When he arrives at Mickey's house -- Mitch seems to have spent most of his life in boardinghouses and rest homes; he and Mickey haven't seen or spoken to each other in years -- Mickey's husband, once again eager to talk about his model railroad, asks Mitch if he likes trains. "I took the bus," Mitch replies with glazed straightforwardness, squeezing the words out with a supreme amount of care and difficulty.

The moment is funny -- and yet it's not. A montage of the tortured solo records that Mitch made after the bitter Mitch-and-Mickey breakup flashes by: They have titles like "If I Had a Gun," "Anyone But You" and "May She Rot in Hell" (shades of Richard and Linda Thompson). They're funny too, but they also suggest Mitch's inability to ever shake anything off; he continues to take the world more seriously than anyone ought to, while Mickey has moved on to a universe of chintz and china pigs -- she may be shallow, but at least she's learned to get by.

But when the older Mitch and Mickey finally do take the stage at Town Hall, their differences, just for those few minutes, melt to nothing. You understand that in the course of preparing for and filming "A Mighty Wind," Levy and O'Hara haven't just lived with those characters; they've lived deep inside them.

Not just a put-on (although of course it's that, too), "A Mighty Wind" is steeped in real emotion. Guest and his actors have perfected the art of making it all look more real than real. It's hard to believe these characters don't actually exist in some alternate universe. But there they are on film, at least, a troupe of comic actors who understand that comedy can be the most serious kind of work an actor can do. Thank God for the model trains: Sometimes they're our best way of connecting with the real thing.