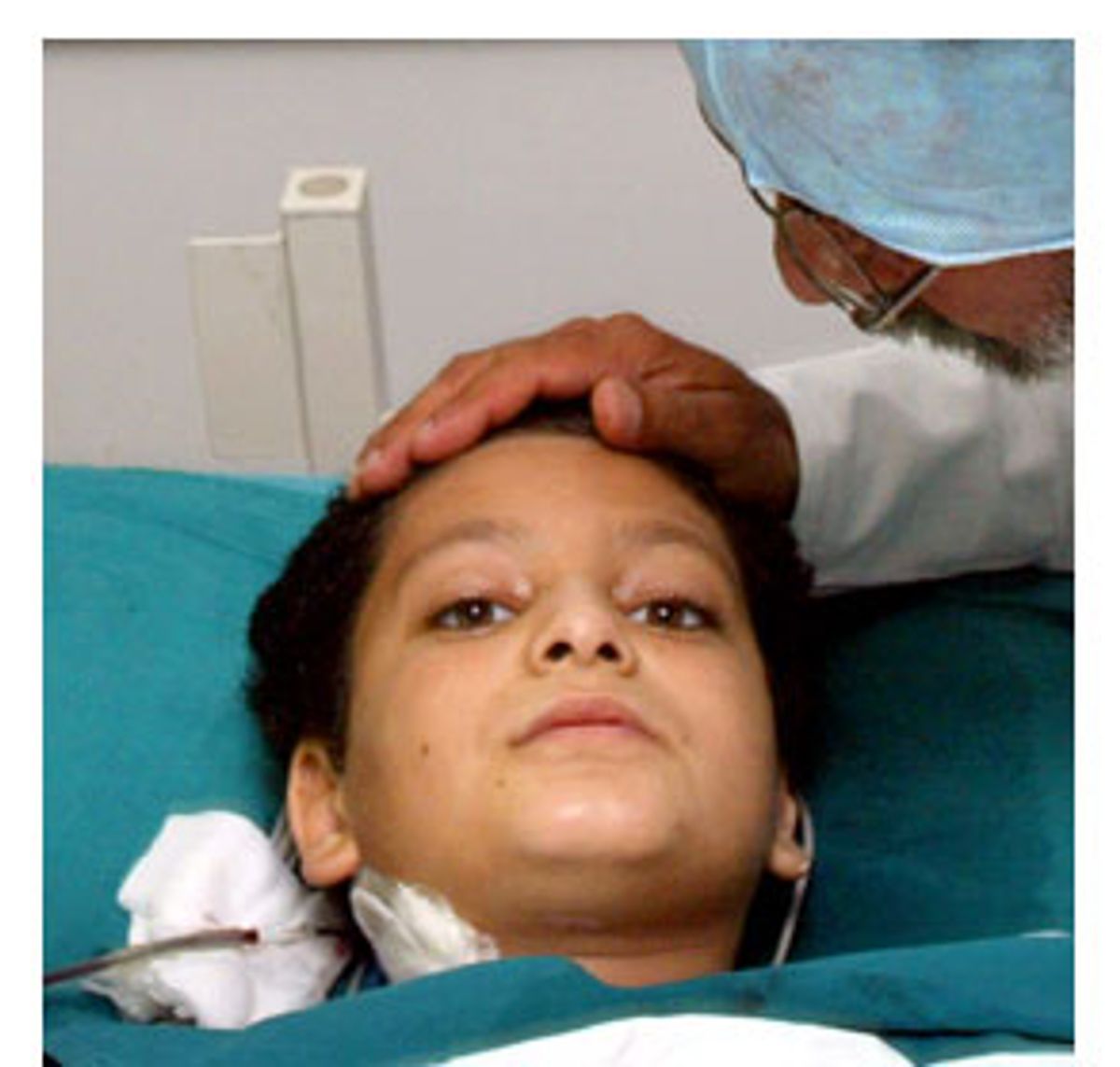 Ever since the war began, I've wished the American media would pick up on the stories and images the rest of the world is seeing, especially when it comes to Iraqi civilian casualties. Now that they have, I wish they'd stop.

On Tuesday, cable news networks discovered the plight of Ali Abbas, a 12-year-old Iraqi boy. Ali's suffering is almost surreal: He lost 15 relatives, including his parents and three siblings, as well as both of his arms, in an errant missile strike on a Baghdad suburb in the early days of the war. His mother was five months pregnant with a fourth child. He's got burns all over his body, some of them are infected, he's in constant pain, and he's had to be moved from hospital to hospital thanks to looters.

Ali's been a favorite story outside the United States for weeks. "Do you think the doctors can get me another pair of hands?" he was widely quoted asking reporters. "If I don't get a pair of hands, I will commit suicide." London tabloids launched appeals to readers on Ali's behalf, and camera crews have come from all over the world to capture his misery.

Clearly, some journalists have used Ali as a poster boy for the human costs of the American invasion, and the amazing 12-year-old called them on it earlier this week. "The journalists always promise to evacuate me. Why don't they do it now?" he asked. "Please take me out of Iraq to be safe and cured."

But if Ali was used by the media up to this point, the manipulation and misunderstanding are over the top now that he's been discovered by American journalists. Ali had been mentioned a few times in the U.S. media before this week, but once the American military was involved in airlifting him to Kuwait, he officially became A Big Story -- a redemption story, the kind we like. "Armless boy becomes symbol of war," was the headline on CBS News.com Wednesday. And from Tuesday night through Wednesday morning, MSNBC and CNN were All Ali, all the time.

Much of the coverage was just plain hokey, like these musings from MSNBC's Mike Taibbi: "You wonder where are his tears, this little boy who lost both arms, both parents, and most of the rest of his family, almost everyone and everything in his 12-year-old world in an American bomb run three weeks ago. Is he feeling better? Less pain?"

But some of the stories have tried to deal with an uncomfortable fact. Ali is, um, well, he's angry at the U.S. for killing his family. "We didn't want war. I was scared of this war," he told reporters earlier. "Our house was just a poor shack, why did they want to bomb us?" He specified that he did not want to go to America for medical care. And American journalists have been flummoxed by how to report on his feelings. CNN hit bottom Wednesday morning, when anchor Kyra Phillips interviewed Ali's doctor in Kuwait, Dr. Imad al-Najada, who explained that although Ali told reporters he was grateful for his treatment, he also said he hopes no other "children in the war will suffer like what he suffered."

Phillips seemed shocked by Ali's apparent inability to understand we were only trying to help him. "Doctor, does he understand why this war took place? Has he talked about Operation Iraqi Freedom and the meaning? Does he understand it?" Poor al-Najada had to explain that the doctors were more interested in treating the boy than indoctrinating him.

"Actually, we don't discuss this issue with him because he is -- the burn cases, and the type of injury, he's in very bad psychological trauma," said al-Najada. "We would like to pass this stage and then we can discuss this issue. But we discussed this issue with his uncle, and the message we get from his family -- they said they are living far away from the American troops, from the military of Saddam, of fedayeen, by 5 kilometers, and they don't know how they hit them by the missiles."

War opponents, of course, will use Ali to show the human cost of the Iraqi invasion -- in fact, he was the lead in David Corn's Nation feature last week, asking whether and how the U.S. should compensate Iraqi civilian casualties. And Ali's suffering, by itself, won't mean the war was wrong, assuming it liberates millions of Iraqi 12-year-olds from Saddam. But it does mean that one 12-year-old suffered enormously, beyond what any child should have to bear. If we're a tough enough country to invade his land and remake it, we should be tough enough to look squarely at his suffering, and his anger, without having it sanitized for our consumption. And if the American media can't deal honestly with his story, then they ought to leave it alone.