An excerpt from "Stiff: The Curious Lives of Human Cadavers," by Mary Roach. 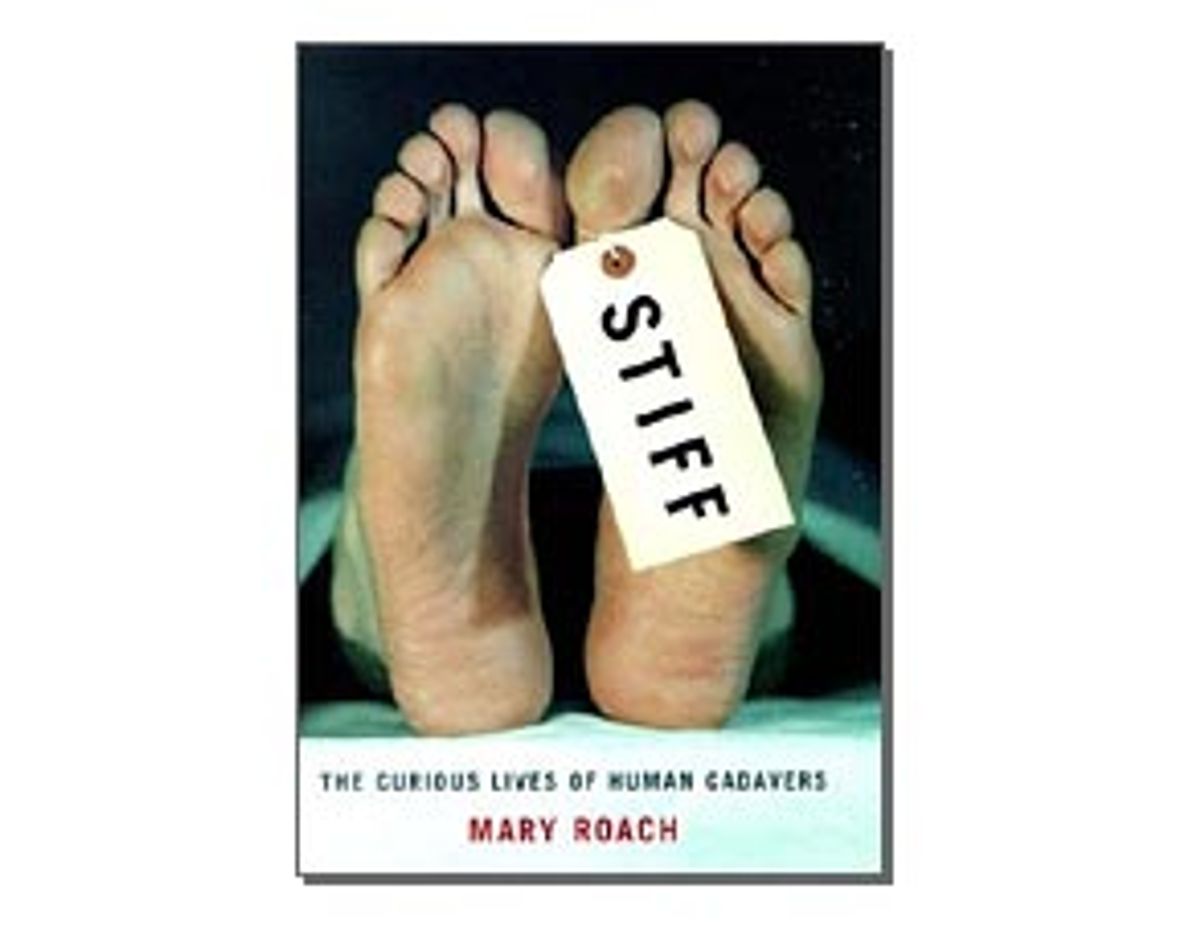 Life After Death: On Human Decay and What Can Be Done About It

Out behind the University of Tennessee Medical Center is a lovely, forested grove with squirrels leaping in the branches of hickory trees and birds calling and patches of green grass where people lie on their backs in the sun, or sometimes the shade, depending on where the researchers put them.

This pleasant Knoxville hillside is a field research facility, the only one in the world dedicated to the study of human decay. The people lying in the sun are dead. They are donated cadavers, helping, in their mute, fragrant way, to advance the science of criminal forensics. For the more you know about how dead bodies decay -- the biological and chemical phases they go through, how long each phase lasts, how the environment affects these phases -- the better equipped you are to figure out when any given body died: in other words, the day and even the approximate time of day it was murdered.

To understand how these variables affect the time line of decomposition, you must be intimately acquainted with your control scenario: basic, unadulterated human decay. That's why I'm here. That's what I want to know: When you let nature take its course, just exactly what course does it take?

My guide to the world of human disassembly is a patient, amiable researcher named Arpad Vass. Vass has studied the science of human decomposition for more than a decade.

This morning, Arpad and I are riding in the back of a van being driven by Ron Walli, who handles media relations for Oak Ridge National Laboratory. ORNL also does research at the "body farm" -- as the decay facility is commonly known. Ron pulls into a row of parking spaces at the far end of the UT Medical Center lot, labeled G section. On hot summer days, you can always find a parking space in G section, and not just because it's a longer walk to the hospital. G section is bordered by a tall wooden fence topped with concertina wire, and on the other side of the fence are the bodies. Arpad steps down from the van. "Smell's not that bad today," he says. His "not that bad" has that hollow, over-upbeat tone that it has when spouses back over flowerbeds or home-hair-coloring goes awry.

Ron, who began the trip in a chipper mood, happily pointing out landmarks and singing along with the music on the radio, has the look of a condemned man. Arpad sticks his head in the window. "Are you coming in, Ron, or are you going to hide in the car again?" Ron steps out and glumly follows. Although this is his fourth time in, he says he'll never get used to it. It' s not the fact that they're dead -- Ron saw accident victims routinely in his former post as a newspaper reporter -- it's the sights and smells of decay.

Just inside the gate are two old-fashioned metal mailboxes on posts, as though some of the residents had managed to convince the postal service that death, like rain or sleet or hail, should not stay the regular delivery of U.S. Mail. Arpad opens one and pulls turquoise rubber surgical gloves from a box, two for him and two for me. He knows not to offer them to Ron.

"Let's start over there." Arpad is pointing to a large male figure about twenty feet distant. From this distance, he could be napping, though there is something in the lay of the arms and the stillness of him that suggests something more permanent. We walk toward the man. Ron stays near the gate, feigning interest in the construction details of a tool shed.

Like many big-bellied people in Tennessee, the dead man is dressed for comfort. He wears gray sweat pants and a single-pocket white tee shirt. Arpad explains that one of the graduate students is studying the effects of clothing on the decay process.

The cadaver in the sweat pants is the newest arrival. He will be our poster man for the first stage of human decay, the "fresh" stage. The hallmark of fresh-stage decay is a process called autolysis, or self-digestion. Human cells use enzymes to cleave molecules, breaking compounds down into things they can use. While a person is alive, their cells keep these enzymes in check, preventing them from breaking down the cell's own walls. After death, the enzymes operate unchecked and begin eating through the cell structure, allowing the liquid inside to leak out.

"See the skin on his fingertips there?" says Arpad. Two of the dead man's fingers are sheathed with what look like rubber fingertips of the sort worn by accountants and secretaries. "The liquid from the cells gets between the layers of skin and loosens them. As the process progresses, you see giant sheets of skin peeling off the body," says Arpad. He pulls up the hem of the man's shirt to see if, indeed, giant sheets are peeling. They are not, and that's okay.

Let us return to the decay scenario. The liquid that is leaking from the enzyme-ravaged cells is now seeping out, making its way through the body. Soon enough it makes contact with the body's bacteria colonies: the ground troops of putrefaction. These bacteria were there in the living body as well, in the intestinal tract, in the lungs, on the skin -- the places that came in contact with the outside world. Life is looking rosy for our one-celled friends. They've already been enjoying the benefits of a decommissioned human immune system, and now, suddenly, they're awash with this edible goo, issuing from the ruptured cells of the intestine lining. It's raining food. As will happen in times of plenty, the population swells. Some of the bacteria migrate to the far frontiers of the body, traveling by sea, afloat in the same liquid that keeps them nourished. Soon bacteria are everywhere. The scene is set for stage two: Bloat.

The life of a bacterium is built around food. Bacteria don't have mouths or fingers or Wolf Ranges, but they eat. They digest. They excrete. Like us, they break their food down into its more elemental components. When we die, they stop feeding on what we've eaten and begin feeding on us. And, just as they do when we're alive, they produce gas in the process. Intestinal gas is a waste product of bacteria metabolism.

The difference is that when we're alive, we expel that gas. The dead, lacking workable stomach muscles and sphincters and bed mates to annoy, do not. Cannot. So the gas builds up and the belly bloats. I ask Arpad why the gas wouldn't just get forced out eventually. He explains that the small intestine has pretty much collapsed and sealed itself off. Or that there might be "something" blocking its egress. Though he allows, with some prodding, that a little bad air often does, in fact, slip out, and so, as a matter of record, it can be said that dead people fart. It needn't be, but it can.

Arpad motions me to follow him up the path. He knows where a good example of the bloat stage can be found.

Ron is still down by the shed, effecting some sort of gratuitous lawn-mower maintenance, determined to avoid the sights and smells beyond the gate. I call for him to join me. I feel the need for company, someone else who doesn't see this sort of thing every day. Ron follows, looking at his sneakers. We pass a skeleton six feet seven inches tall and dressed in a red Harvard sweatshirt and sweatpants. Ron's eyes stay on his sneakers. We pass a woman whose sizable breasts have decomposed, leaving only the skins, like flattened bota bags upon her chest. Ron's eyes stay on his sneakers.

Bloat is most noticeable in the abdomen, Arpad is saying, where the largest numbers of bacteria are, but it happens in other bacterial hot spots, most notably the mouth and genitalia. "It's predominant in the groin and face. In the male, the penis and especially the testicles can become very large."

"Okay, softball." Arpad Vass is a man with infinite reserves of patience, but we are scraping the bottom of the tank.

Arpad stops and looks down. "That's bloat." Before us is a man with a torso greatly distended. It is of a circumference I more readily associate with livestock. As for the groin, it is difficult to tell what's going on; maggots cover the area, like something he is wearing. The face is similarly obscured. They live like rice, pressed together: a moist, solid entity. If you lower your head to within a foot or two of an infested corpse (and this I truly don't recommend) you can hear them feeding. Arpad pinpoints the sound: "Rice Krispies." Ron frowns. Ron used to like Rice Krispies.

Bloat continues until something gives way. Usually it is the intestines. Every now and then it is the torso itself. Arpad has never seen it, but he has heard it, twice. "A rending, ripping noise," is how he describes it. Bloat is typically short-lived, perhaps a week and it's over. The final stage, putrefaction and decay, lasts longest.

Arpad continues up the wooded slope. "This woman over here is farther along," he says. That's a nice way to say it. Dead people, unembalmed ones anyway, basically dissolve; they collapse and sink in upon themselves and eventually seep out onto the ground. Do you recall the Margaret Hamilton death scene in "The Wizard of Oz"? ("I'm melting!") Putrefaction is more or less a slowed-down version of this. The woman lies in a mud of her own making. Her torso appears sunken, its organs gone --leeched out onto the ground around her.

The digestive organs and the lungs disintegrate first, for they are home to the greatest numbers of bacteria; the larger your work crew, the faster the building comes down. The brain is another early-departure organ. "Because all the bacteria in the mouth chew through the palate," explains Arpad. And because brains are soft and easy to eat. "The brain liquefies very quickly. It just pours out the ears and bubbles out the mouth."

Up until about three weeks, Arpad says, remnants of organs can still be identified. "After that, it becomes like a soup in there." Because he knew I was going to ask, Arpad adds, "Chicken soup. It's yellow."

Ron turns on his heels. "Great." We ruined Rice Krispies for Ron, and now we have ruined chicken soup.

On our way out, Arpad shows us a skeleton with mummified skin, lying face down. The skin has remained on the legs as far as the tops of the ankles. The torso, likewise, is covered, about up to the shoulder blades. The edge of the skin is curved, giving the appearance of a scooped neckline, as on a dancer's leotard. Though naked, he seems dressed.

We stand for a minute, looking at the man.

There is a passage in the Buddhist Sutra on Mindfulness, called the Nine Cemetery Contemplations. Apprentice monks are being instructed to meditate on a series of decomposing bodies in the charnel ground. The monks were told to keep meditating until they were calm and a smile appeared on their faces. I describe this to Arpad and Ron, explaining that the idea is to come to peace with the transient nature of our bodily existence, to overcome the revulsion and fear. Or something.

We all stare at the man. Arpad swats at flies.