You can't say TV news didn't do its part for the war effort. A highlight reel, starring Matt, Joe, Sean and Paula. 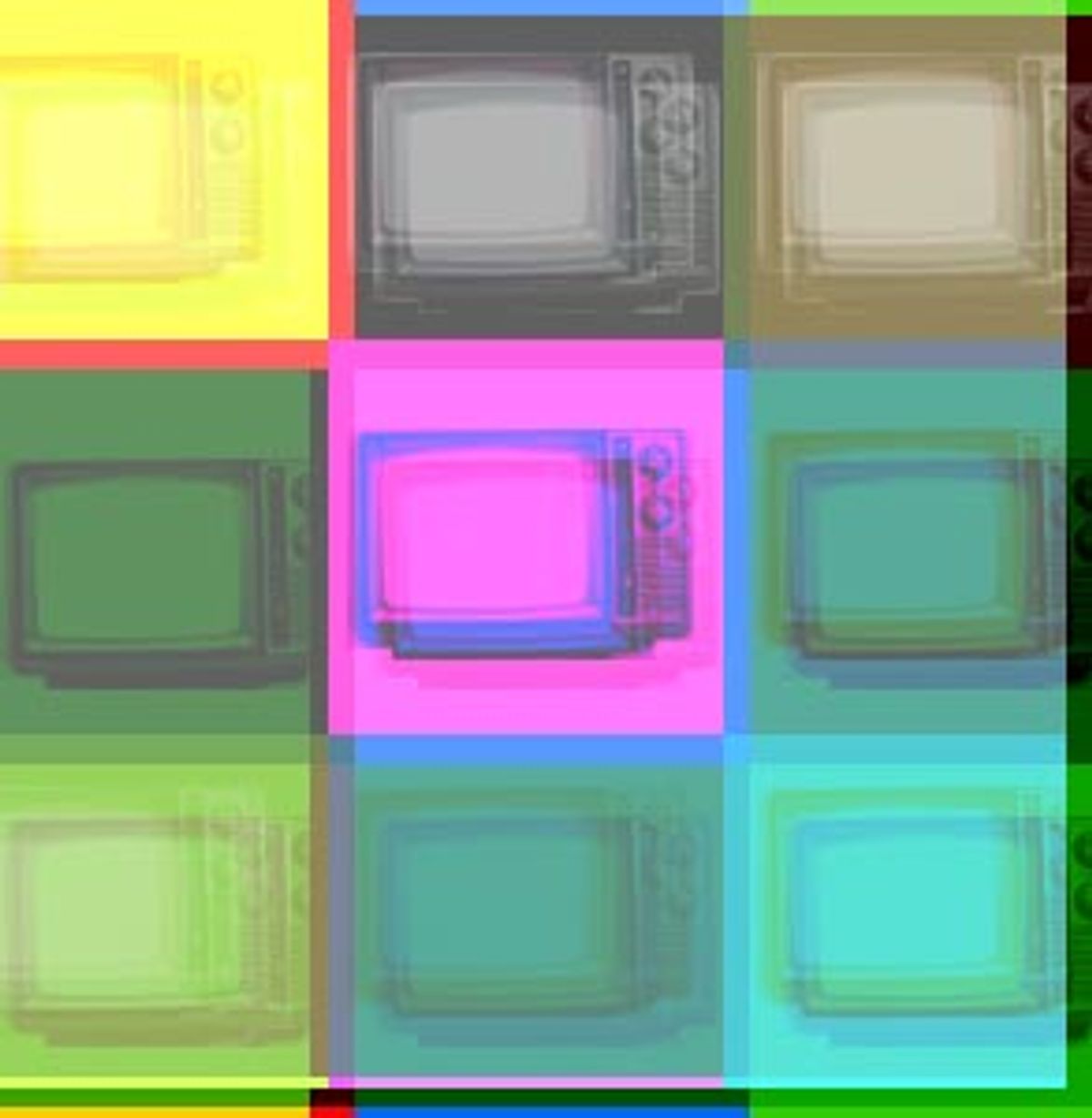 As the war in Iraq raged overseas, a battle also broke out between the rival cable news networks that might best be described as: Who can make White House press secretary Ari Fleischer happiest?

CNN, MSNBC and Fox News duked it out for the attention of a concerned public that, by and large, could get the same press conferences, attack footage and falling statues from every outlet. The competitive credo all three networks seem to have followed from the very beginning -- when in doubt, wave a flag -- was largely a reaction to Fox, which vaulted past CNN in the past year by embracing a conservative coloring of all news. CNN rallied with some shameless patriotism of its own, as did the major networks. But before long it was the struggling MSNBC that may have wrested from Fox the mantle of most blatant, schmaltzily jingoistic network in the land. MSNBC is still a distant third in the ratings race, but it tightened the slack between it and second-place CNN.

Ah, but why give MSNBC all the glory? All the networks have had their moments in the past month. It's time for the highlight reel. So pin that flag on your lapel, and let's survey the top 10 moments in jingoistic war coverage.

10. The "surgical strike"
A favored military term picked up by the most credulous media is the use of "precision" or "surgical" bombings. While bombs in the Iraq war are undoubtedly much more accurate than those used in the past, there were still reports of inevitable missed targets and civilian casualties in the current conflict, a number that might not be determined for some time. But the Pentagon fed that terminology to a willing media, and the more clueless reporters eagerly gobbled it up.

As the liberal media watchdog group FAIR reported, the term popped up frequently on NBC. Reporter Bob Faw described "a community which very much endorses that surgical strike against Saddam Hussein," and "Today" co-host Matt Lauer, in reference to Baghdad, said, "The people in that city have endured two nights of surgical airstrikes." The terms were also casually used on other networks, including CNN, Fox News and CBS.

9. Public Enemy No. 2: The French!
"What do you think of the French in general?" Fox News anchor Neil Cavuto asked Rep. Dan Burton, R-Ind., while interviewing him about how the U.S. should now deal with nations that opposed the war. "They're not a power that I know of ... Why do we even bother with them?

Joe Scarborough, former Republican congressman and host of the nightly "MSNBC Reports" (now called "Scarborough Country"), took a similarly gratuitous swipe at our erstwhile allies who opposed our war with Iraq. Introducing a news segment about U.S. victories over Iraqi troops, Scarborough intoned, "But first, Saddam's French advisors taught him how to do one thing right: surrender."

8. Public Enemy No. 3: Entertainers!
The worst in this department was most certainly Scarborough, who devoted regular segments on his show to mocking celebrities after it became clear the war was nearly over. He showed a clip of Jessica Lange saying, "The path this administration is on is wrong, and we object. We object in our hearts, in our minds. It is an immoral war." Similarly, he showed Ed Asner saying, "I would never give this administration any sign of approval, because I think that they've ripped up this war to satisfy their own needs, not the nation's needs."

Neither of these actors, of course, predicted the U.S. would lose the war. The fact that the U.S. won doesn't make their arguments that the war was immoral or that President Bush is not to be trusted more or less arguable. But Scarborough was undeterred. "I've always found it so remarkable that these leftist stooges, for anti-American causes, are always given a free pass," he said April 10.

7. Public Enemy No. 4: The media!
Among the favorite targets: the New York Times, and especially its elder news analyst R.W. "Johnny" Apple. Criticism of Apple has become so constant as to become a clichi, one often unexamined. As the Web site Daily Howler pointed out, for example, Fox News' Brit Hume complained on April 10, saying, "Let me mention one other person who deserves special mention. And it's R.W. 'Johnny' Apple, legendary reporter of the New York Times. This is what he wrote today. 'News of fierce fighting in Hilla, 50 miles south of Baghdad, and on the eastern and southern sides of the capital belies talk of collapse.'"

The headline of Apple's piece? "Bush's War Message: Strong and Clear." And it featured such fiercely antiwar statements as "Bush has carried the country with him, and most of the second-guessers among Washington's policy experts are keeping their voices down these days."

Fox's Sean Hannity busily trashed the media with statements like, "If you read the New York Times [or] the Washington Post at any point during that three-week period [since the war began], you would think we were losing this war." Of course, when it suited his needs, Hannity was happy to turn tail. While arguing with Rep. Charles Rangel, D-N.Y., about whether Iraqi citizens were welcoming U.S. troops, Hannity chided the congressman, "You're not reading the New York Times."

5. When "war" just doesn't do the trick
Ever forget the name the government has given to the war? Not if you watched Fox News or MSNBC. Unlike CNN, which used a more neutral "War in Iraq" graphic, the two networks seemed locked in a tight competition over who could show the phrase "Operation Iraqi Freedom" more often and more prominently.

Fox News won the contest for quantity, with the words on the screen nearly 24/7. MSNBC, however, scores points for size, with huge hanging signs and wall graphics screaming "Operation Iraqi Freedom" emblazoned throughout its warehouse-like studio.

4. That big clock
MSNBC placed a "deadline" clock on its graphics-heavy screen, counting down, second by second, President Bush's 48-hour deadline for Saddam Hussein and his sons to leave Iraq. Perhaps the network missed the president's statement that war would be "commenced at a time of our choosing"? The clock ultimately ran out, disappearing before any significant invasion news.

3. And now, a word from our sponsor ...
Rather than stick to its version of "fair and balanced" news coverage, Fox News often opted for a much simpler, direct route: looping gratuitous speech excerpts by President Bush, including agitprop like, "The vise is closing, and the days of a brutal regime are coming to an end" and "Against this enemy we will accept no outcome except complete victory." The clips were not related to any story or feature, they were usually just used to lead into or out of commercial breaks, to make sure they maintained a pro-war state of mind, we guess.

2. The war promo
House ads MSNBC ran between programs and during commercial breaks functioned like movie trailers, both promoting the war and touting its heroes in such heart-tugging cinematic style they could have been produced by the Defense Department's Tori Clarke. MSNBC ran one promo, scored with "The Star-Spangled Banner," that flashed phrases like "land of the free" and "home of the brave" over shots of soldiers, tanks and Iraqi children. The Microsoft-NBC joint venture also ran promos using similar footage over the sound of patriotic speeches, such as John F. Kennedy's "pay any price" inaugural address, and others by President Bush.

1. The Osama-Saddam connection
Ultimately, Fox wins the top prize not for its relentlessly pro-war anchors and news angles, but for the simple graphic that so often brought viewers back from commercials. "War on Terror" the intro began, before whooshing off the screen as a new phrase jumped on and took its place: "Target: Iraq."