What do you do when six single women descend on your community seder? Duck. 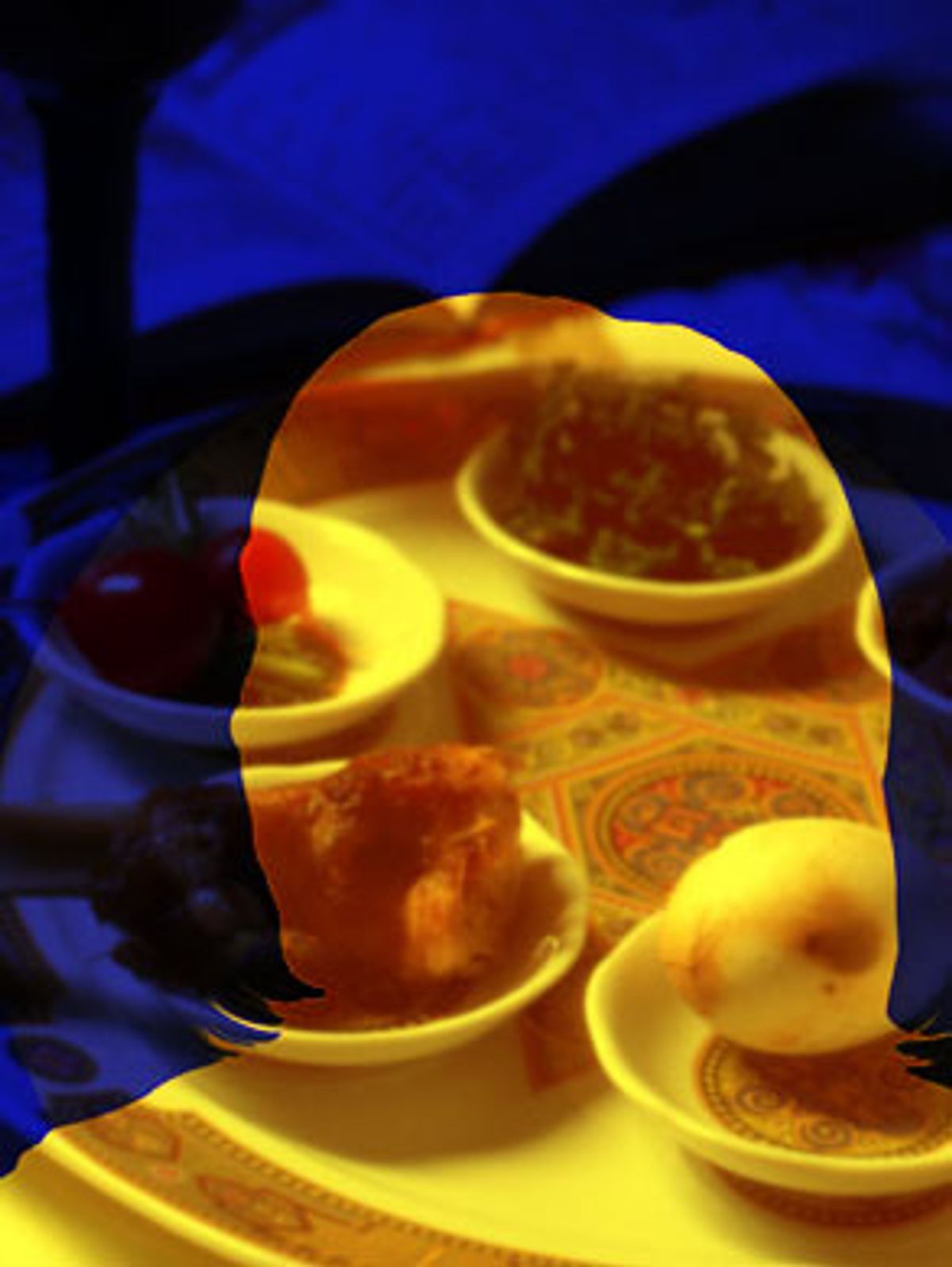 It's not anti-Semitism, because I'm squarely of the tribe. To the best of my knowledge, it's not self-hatred; I mean, some of my best friends are Jewish. It's just the way things have rolled so far. The last guy I dated was Palestinian, the guy before that, Irish. Before that, Italian. Hungarian. Slav. Welsh. Norwegian. There was an Adam Rosenstein in college, but he broke up with me, in part because I was "too Jewish." (He later straightened his hair and changed his last name to Reed, so the problem may not have been all me.) And my male Jewish friends don't seem to kiss any mezuzahs either. They've all got excuses: "I dig straight hair," "They're neurotic," "They're too high-maintenance." And the old standby: "All the cute girls at the kibbutz junior year were from that Swedish peace group."

As for me, I've always blamed it on geography: I spent my 20s bouncing around between Idaho, Japan and Wisconsin, regions that don't really attract the Hillel set. I'll concede that it could also be a matter of taste. Hell, even the Palestinian was blond.

But my parents keep reminding me, as if I needed reminding, that I'm not getting any younger. And at a fundamental level, I do believe that the more shared background and cultural commonality you have with someone, the higher your chances of making it in the long haul. That's why I'm here at Jewish Community Center's annual seder, in a big green banquet hall in San Francisco, where for $50 a head, you can celebrate the Israelites' exodus from Egypt with 300 fellow wanderers who for some reason couldn't -- or wouldn't -- get home for the holidays.

And so why is tonight different from all other nights? Because I'm sitting alone at Table 26, which the nice lady who took my credit card number promised was designated for unattached men and women in their 30s and 40s. All around me, men pull chairs out for their wives, young couples rock babies wrapped in pink coverlets, and 75-year-old women pull waiters aside to insist that their husbands can not have any salt with their meals. Over here at Table 26, it's just me all by my lonesome at a table set for seven, and I'm staring at a bottle of grape juice, a bottle of Manichevitz, and a miniplate decked out with a slice of horseradish, a dollop of haroset, a thimbleful of salt water, and an abnormally small hard-boiled egg.

I spot a work friend of mine across the hall, and wave to him, feigning bright-eyed goodwill. He and his (Chinese) girlfriend have chosen a young couples' table, and I'm tempted to switch seats last minute. But just as I'm gathering up my things to join him, a fellow single takes a seat next to me. She introduces herself as Susie, and she is a cheerful woman in overalls. Just as we are exchanging pleasantries, two more women about our age settle in. One is a wholesome sturdy-looking dark blonde with chin-length hair -- a biochemist named June. The other woman, also blond, tastefully made up and wearing a glamorous black sequined top that I'm sure she feels is wasted on the present company, looks exactly like Ivana Trump.

We are soon joined by another attractive blonde with a soft, wide face and her hair up in a barrette. She takes a seat to my left, and as we all begin to settle in, fast giving up hope that any men will join us, the rabbi calls for attention. He explains that our table is our community, and suggests we begin the ceremony by taking a few minutes to introduce ourselves to the people who will be our "families" for the night.

I learn that Ivana Trump is a yoga instructor named Stephanie, that June has a degree in biogenetics, and that Susie only wears overalls. They in turn learn that I am a reporter doing a story on being single and Jewish and investigating whether or not Jewish men are good to date.

Kiss the spirituality of the event goodbye. The table erupts into a cacophony of frustrations -- women interrupting each other, women thumping the table for emphasis -- and soon the rabbi and the kiddush chanting, along with the other 272 people in the dining hall, have been completely forgotten:

"The problem? Look around you! There's the problem! There are no single Jewish guys left!"

"May as well finish Elijah's glass too, clearly no men are coming to this table."

"Aaah, the problem is that they all get so spoiled by their mothers."

"Yeah, and why do they all have sensitive stomachs? What is up with Jewish men and their stomachs?"

"Do you think I'm too picky because I insist in my online dating profile that I want a Caucasian?"

"This rabbi is so great. He's the one who introduced me to my dating coach."

"Fourteen years we were together, but why should he marry me, I mean he was getting everything he needed, we were living together!"

"We've been together for five years, and suddenly he's having commitment issues?"

"Oh my God, look at you writing this all down! You're just like that woman on 'Sex and the City'!"

I do not point out that if there were any sex in my city I wouldn't be here, nor do I point out that while Sarah Jessica Parker's character worries incessantly about hemlines, restaurant lines and parting lines, never once have I heard her express an opinion over the only thing on most writers' minds, deadlines. I'm about to do so, when the rabbi interrupts us, with an unwelcome plea (directed specifically at our table -- Oh, those troublesome single chicks) to settle down and remember why we are here tonight. Something about the Jewish people being released from slavery.

"Whatever for slavery," says June.

Appropriately chastened, we move along with the ceremony, saying "Amen" at the appropriate places, singing the songs we know, and following along as well as our patchy Hebrew will allow. Finally it's time for the actual meal, which the crowd ushers in with a rousing rendition of the story of the Four Sons, sung, oy gevalt, to the tune of "My Darling Clementine." We settle in to eat, but not before Rebecca, a stunning redheaded latecomer, reports that there is a table of seven single men on the other side of the hall: Table 11. It turns out that we haven't been separated from the men as part of religious protocol, but rather through an administrative glitch, for which the ladies soundly rip the rabbi a new set of tzitzit.

Forget all that milk and honey rigmarole. Table 11 is the new Promised Land. As the only one there with a good excuse to make an approach (what man, Jewish or otherwise, can resist being quoted by the press?), I am bidden -- nay, commanded -- to invite them to join us. I take a deep breath and head on over.

All I see before me is a circle of yarmulkes, and it's difficult to tell whether any of the men underneath them are attractive. "Please join us," I beg, pointing to our table. The men nod, smile, make enthusiastic motions to show that the minute they are through eating, they will report for duty, with pleasure.

But an awkward silence follows, and that's when I blow it.

I mention, nicely enough, that there has been some discussion at our table of the way all Jewish men seem to be controlled by their mothers. Glasses freeze in transit. Eyebrows raise. The warm welcome I originally received chills. None of the men stand up to follow us. I skulk back to the table in shame, and inform the Sisterhood that I may have Really Fucked Up.

Jennifer, Rebecca, June, Stephanie and Susie all reassure me that we don't need guys to have a good time anyway -- in other words, the good ladies lie -- and the conversation turns to a spirited comparative study of dating services: For those of you who might be curious, Table for Six yields materialistic men and beautiful women. Speed Dating, once de rigueur among husband hunters, has been supplanted by "Hurry Dating," which gives you two minutes, not eight, to "get to know each other" before deciding if you're interested. JDate gets you lots of responses, but also yields lots of dorks. Match.com isn't self-selecting enough. And eharmony is promising because they require you to take a two and a half hour personality test, so, as Susie puts it, you feel like you've "really got someone taking care of you." "Do you know how much money I've spent on these things so far?" she continues. "It's such a waste. Not that I'm ever going to stop, mind you."

Our conversation stops dead when a few intrepid bachelors do actually show up at our table. By now we are four ritual wine glasses into the celebration, and so riled up over being single that the poor suckers don't stand a chance. There's Scott, 27, an exceedingly handsome dark-eyed junior high school teacher with a hip mustache. Jeff, 28, a redhead who does something undefined for the University of San Francisco, and David, 41, a tall, schleppy-looking corporate lawyer who says, "You're going to quote me? That's OK, I get quoted all the time."

After about 15 minutes of high-energy but slightly hostile group conversation about Jewish mothers and the evening's unfortunately gender-segregated seating, our new coed party is interrupted by the rabbi and his perpetual insistence on prayers and songs. The men leave, bidding barely courteous farewells.

Alone once more, the women proceed to eviscerate their potential suitors. Scott, who was by all accounts gorgeous -- who could have been a model, for Moses' sake -- is summarily dismissed as too young. David's pants were too tight, according to Jennifer. And Susie, the kindergarten teacher, says, "Ugh. I feel like we were on 'Happy Days.' Jeff was Ralfie, Scott was Potsie, and that David guy, he was trying to be Fonzie!"

Stephanie nods. "Yeah, David was so arrogant, just because he's a lawyer. He didn't say anything deep at all." Apparently the speed-dating thing trains you well, because they certainly didn't speak for longer than eight minutes, and Stephanie seems satisfied that she's had enough time to make her judgment.

The evening is now over. No Jewish matches have been made, although I leave with a backpack full of business cards from my tablemates. When I get home, drunk and full up on macaroons, I check my e-mail. One of my oldest and dearest friends, a Jew named Josh from Larchmont, N.Y., has written to tell me he's met a lovely new woman.

How much do you want to bet she's not Jewish?