"Boomtown" creator Graham Yost has given the TV cop 'n' lawyer formula an extreme makeover. Will NBC give his fresh and unique show a second chance? 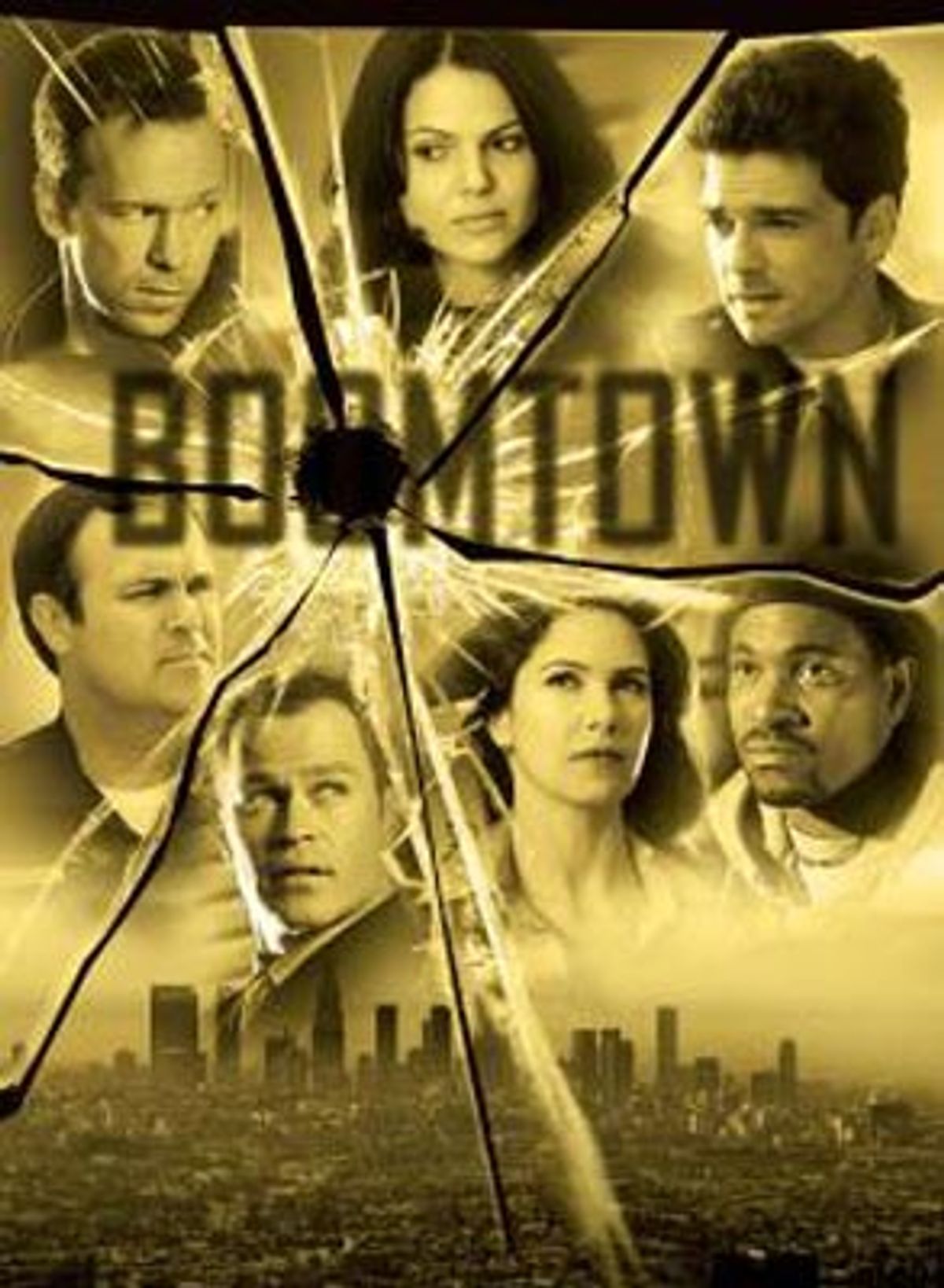 Scruffy renegade cops. Wise-guy detectives. Arrogant but high-minded lawyers. Regardless of the latest reality trends molding the networks' programming strategy, procedural dramas populated by stock characters navigating familiar story lines regularly constitute the main course in their fall lineups. Each year, the McDrama rises again, and you can have it any way you like it. You can stick with the classic ("Law & Order," "NYPD Blue"), get it with extra cheese ("CSI: Miami"), go animal-style ("The Shield"), or skip the meat altogether ("The Practice").

The allure of the McDrama is also its weakness: You always know what you're getting. When will we get tired of having the same old thing, over and over again?

Maybe when it stops improving. NBC's "Boomtown" (Sundays at 10 p.m.) provides ample evidence that, as long as talented writers, directors and actors are applying their creative skills to a particular genre, they can transform a paint-by-numbers into an original work of art. Creator Graham Yost ("Speed," "Band of Brothers") recently told New York Times film critic Elvis Mitchell on NPR's "The Treatment" that he was influenced and inspired by "Hill Street Blues," a show that arguably did for the cop McDrama what bacon, chili and cheese did for the burger. Similarly, Yost takes the basics of the McDrama and twists them into something that feels utterly fresh and unique.

From the breathtaking opening credits of "Boomtown," it's clear that Yost has a passionate drive to reach beyond the typical limits of televised drama. The Los Angeles skyline rises from the desert, and the camera sails into the open window of the tallest building, into a lush apartment, over a reclining woman, and into a framed picture next to her that becomes three-dimensional. The musical theme is minimal, allowing the provocative collage of images to dominate your senses. Generally, I couldn't care less about the opening credits of cop dramas, most of which are as blandly macho and as dull as the institutions they depict. "Boomtown's" credits, though, launch the show with confidence by reflecting its creator's courage of conviction. Regardless of what comes next, you know that this is a show that dares to take itself seriously.

Then again, plenty of McDramas take themselves far too seriously. Just take in a few milliseconds of the trumped-up, painfully melodramatic dialogue of "CSI" or the "Ally McBeal"-esque fantastical plots and heavy-handed moral dilemmas of "The Practice." While "Boomtown" may share some of the melodrama and the moralism of such shows, it has the cinematic elegance, the nuanced dialogue and the skilled, appealing actors to pull it off.

Neal McDonough shines in his role as David McNorris, an ambitious, self-centered deputy D.A. whose alcoholism has threatened to topple his career late in the season. McDonough has a piercing elfin look that used to provoke me to yell, "I hate that guy!" whenever a promotional spot for "Boomtown" appeared on my TV screen. Still, pulling off the repugnant but charming power player isn't easy. In last week's episode, McNorris' self-destructiveness and grandstanding landed him in some especially rough terrain. In one particularly vivid scene, he boozily plays prosecutor and defendant to his own crime. While even the best actors can slow to a crawl or, even worse, mimic Al Pacino when faced with such challenging material, McDonough somehow managed to mix delusions of grandeur with self-loathing without breaking his character's manic stride.

Donnie Wahlberg is appropriately understated as Joel Stevens, a beleaguered, emotionally weary detective. Stevens' partner, "Fearless" Bobby Smith (Mykelti Williamson), reinvents the overconfident, showoff detective as a sensitive, emotional character. The rest of the cast is unexpectedly diverse and multidimensional; every time you think, "Ah, here's one of the flat characters," something about them can spark your interest. Gary Basaraba vacillates between irritating and wise as Ray Hechler, a veteran patrol officer, and the "tough metro reporter" Andrea Little (Nina Garbiras) is alternately judgmental, forgiving, enraged and foolhardy. You might say it's just what you'd expect from a journalist battling a drinking problem, but Garbiras is as interesting to watch and as easy to respect as Allison Janney's C.J. on "The West Wing."

While "Boomtown" has been alternately praised and lambasted for the so-called gimmick of presenting each plot from multiple perspectives, the show's strengths transcend its unique storytelling style. Most scenes are beautifully shot, transforming familiar L.A. landscapes that look flat, gray and scrappy through most lenses into warm, full spaces. The photography captures L.A.'s best trait, its sunshine, in all of its finest moments: a pink sunrise on the beach in Santa Monica, the long shadows of magic hour on some hillside neighborhood crowded with craftsman houses and towering palm trees, a supernatural pink and orange sunset over the downtown skyline.

Of course, any director can get a little ambitious with camera techniques and creative plot structures -- such manipulations alone could never save the McDrama from itself. What comes through the strongest in Yost's work is his ability to translate emotions into images. In one episode, Fearless confronts a demon from his past. As he's standing outside his enemy's house, time-lapse photography and special effects show us time going backward: The house changes color, the trees get shorter, a billboard disappears and a younger Fearless crosses the street to the house, 15 years earlier. These aren't just tricks with smoke and mirrors; we can sense the weight of what the character is facing before we even know the details of his back story.

Today's TV writers and directors are perhaps the first generation in their profession to grow up watching TV serial dramas with acting and filming of a high enough quality to be shown on a big screen. While sitcom writers have been raised on great shows for years, from "I Love Lucy" to "The Mary Tyler Moore Show" to "M*A*S*H," the well-made TV drama is a relatively recent development. The influence of good TV drama can be felt in Yost's ability to transform what could be just another McDrama into a show that feels as passionate and unexpected as most good films, with the benefit of multiple hours to develop characters and story lines over the course of a season.

NBC may still be on the fence about "Boomtown," but no one else is. Critics have generally embraced the show, its ratings are improving, it recently won a Peabody Award, and, based on online fan sites, at least, word of mouth seems to be growing. As Yost said to Mitchell during their NPR interview, "The movie theater was our family church," and this passion clearly comes through in "Boomtown." Surely a show that's as richly cinematic and as well-written as most good movies should get a chance to build an audience in our living rooms.