The agony of crow's-feet

ABC continues to build its legacy of skin-deep programming with a new installment of "Extreme Makeover," in which the road to fulfillment goes through the plastic surgeon's office. 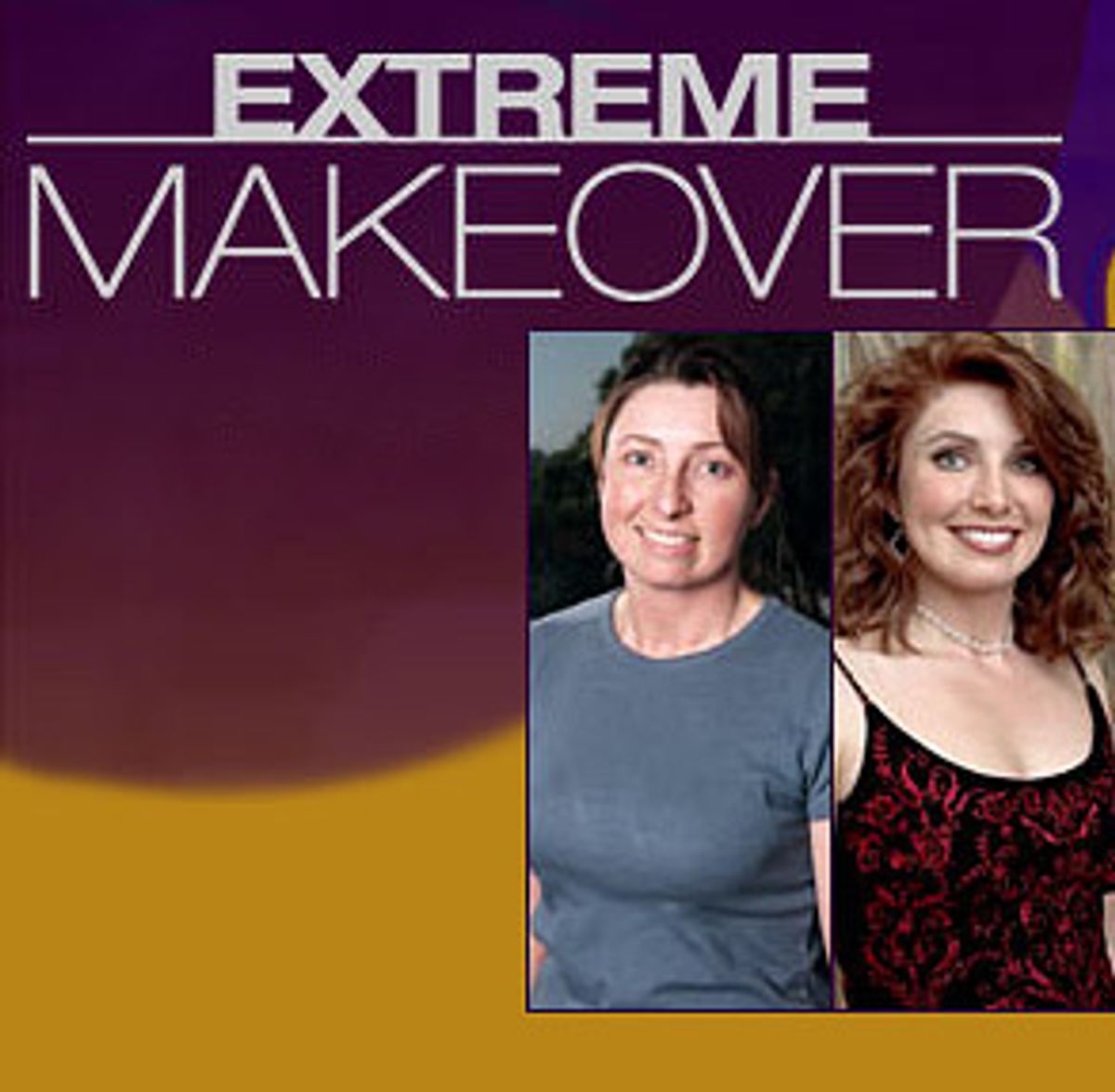 Now that the wildly unpopular reality show "You're Not Hot" -- uh, I mean, "Are You Hot?" -- has convinced you that your looks fall somewhere between mediocre and repulsive, ABC has brought back "Extreme Makeover" (Wednesdays at 10 p.m.), the next logical step in the kind of skin-deep programming the network is becoming known for.

If Lorenzo Lamas' laser pointer didn't make you feel deeply ashamed of your smallish breasts, uncapped teeth or soft inner thighs, the scalpel-happy experts at "Extreme Makeover" will pick up where Mr. Burrito-in-my-pants left off. The show launches with dramatic before and after shots of the participants from the first edition, which aired last December. A booming Jerry Springer-style voice-over explains that in the next seven episodes contestants will be treated to the same highly expensive glamour scientists: a plastic surgeon, a cosmetic dentist, a wardrobe stylist, a personal trainer, a hair stylist and a makeup artist. While Lamas and company approached the crucial task of setting contestants straight on exactly how hot they were with the solemnity of morticians, the geniuses behind "Extreme Makeover" take it one step further, chirpily singing the praises of beauty as the pathway to a whole new life.

Then, of course, they cheat. The show's first contestant has such an obvious reason for wanting surgery that they might as well call it "Extreme Deformity Correction." Kiné Corder has an upper lip that's so large, the inner portion splits vertically and looks a lot like an uncorrected cleft lip. In case you think I'm exaggerating, take it from the cosmetic dentist who sits in on Corder's plastic surgery in part because, as he puts it, "In 20 years of practicing I had never seen redundant tissue like that." Other than this one obvious flaw, Corder is an attractive, stylishly dressed, seemingly confident woman.

Before telling Corder that she's been chosen, though, cute and perky host Sissy Biggers needs to know just how awful it is not to be cute and perky. Corder recalls years of name-calling and insecurity as a teenager, and says she doesn't like to kiss because her lips are so big. "Sometimes when I break up with people, I think, like, 'OK, did he let me leave because he never really liked my lips anyway?' But because we never talked about it, I never know."

Corder admits that she hates talking about her flaw, but she's willing to risk it for a chance to win free plastic surgery. "This is really crazy when I think about it," she says, tearily, "because the 'Yes' [to be on the show] only comes if I open up, but I can only take the 'No' if I don't." She squeezes her eyes shut. "If I don't, I wouldn't have talked about it ever -- I would've been 65 years old and still never talked about it."

A teary-eyed Biggers finally pulls the trigger and tells Corder she'll be on the show. "This is incredible!" Corder says, wiping away her tears. "Why'd you make me cry?!"

Because it makes good television, honey. So does a mom with three small kids who, at 40, looks about 50. Then again, Tammy Guthrie isn't wearing any makeup for the first half of the program, her hair is laughably unstyled and stringy, and she's consistently shot in sweat pants and a T-shirt, leaning over her kids' homework or walking them to school. She has dark circles under her eyes and some acne scars on her chin, but otherwise all she seems to need is a tiny amount of concealer and a hairbrush.

Not so, explains a voice-over. What Guthrie needs (or, as they're careful to put it, what she wants) is an eye job, a face-lift, scar removal, fixed teeth, collagen injections in her lips and -- bonus! -- a brand new nose. But "Extreme Makeover" doesn't merely imply that most slightly haggard-looking 40-year-old women need brand new faces (if only everyone could afford one!), they take it one step further and hint that Guthrie's current inability to color her roots has deep psychological roots.

Voice-over: "Tammy's devoted herself to doing everything for her family. But the constant grind has worn her down at only 40 years old."

Guthrie: "All my life I've always taken care of other people ... One of my biggest goals in life was to give unconditional love to my children -- for them to feel safe and secure, for them to feel wanted [breaks into tears] ... for them not to feel neglected ..."

Voice-over: "But in focusing all her attention on her children, Tammy's neglected herself."

Voice-over: "Armed with this newfound knowledge, Tammy has come to a life-affirming decision."

Guthrie: "This is just something Mommy's gotta do for me."

Sounds like what Mommy really needs to do "for me" is go straight to the nearest therapist's office -- OK, maybe she could swing by Sephora on the way there, plus maybe a stop at Barnes & Noble for a copy of "Co-Dependent No More." But this is TV! We've got no time for talking cures or even fancy eye creams! Scalpel, please!

A funky porno-style soundtrack plays in the background and the voice-over growls, "First up -- world-renowned plastic surgeon Dr. Garth Fisher, a board-certified cosmetic surgeon" who "has been voted one of the top surgeons in his field!"

The insanely popular plastic surgeon listens raptly as Guthrie explains the aging process to him. "What I've been noticing," she says solemnly, "is a lot of droopiness and sagging in my face, my cheeks, my neck. In addition, my eyes, they seem to ... I'm getting a lot more wrinkles."

"Ah yes, wrinkles!" the doctor's concerned face seems to say. "One of the most common signs of aging! Clearly you are, indeed, growing old, and therefore need immediate surgery."

Corder, who does have a clear need for lip surgery, is asked what else she might like done, you know, while they're at it.

"Stomach is not bad, but it could be better ..." she starts, and by the end of her consultation, the fairly fit-looking 29-year-old has signed up for a breast lift, a tummy tuck, some teeth bleaching and filing, and Lasik eye surgery.

The surgeries themselves don't hold many surprises: Anesthesia looks really enjoyable -- a nurse makes a barely discernible comment right before sticking an oxygen mask on Corder, something along the lines of "now she'll stop talking" -- and recovery looks unbelievably awful. Corder has stitches in her lips and looks pretty uncomfortable, but she seems fine compared to Guthrie, who emerges from surgery looking like the survivor of a fiery crash. Her head is totally obscured in bandages and she says she's nauseated.

The surgeon visits her two days later and says, "This is always one of the best days," while the camera does a close-up on a drain filled with blood and liquid attached to her head. The voice-over grumbles, "Afterward, Dr. Fisher must rewrap her head to keep the swelling down." Sounds like a great day to me.

Once the two contestants are mobile again, the show speeds through the rest of their transformation -- exercise, hair, makeup, clothes. Perhaps the creators recognize that we've witnessed such nonextreme fare a million times before. Corder does a few push-ups and eats some organic food, Guthrie shops for clothes and gets a trendy haircut. We only see each of them from the back, to build the suspense of that final moment of truth when each woman's family and friends will see the "new" her for the first time.

Finally, the big day arrives, and friends and family are seated at tables facing a spotlighted ministage. After a lot of yammering intended to add to the rising tension, Corder emerges looking just like she did before, only without the lip problem. She's wearing a dress, a little makeup and some hair extensions, but the impact would be more dramatic if we could see her with her old dreads, in her own, far cooler clothes. Still, her friends and family seem relieved that she's in one piece and doesn't look like a different person.

Next, it's Guthrie's turn, and her husband, Wally, seems almost giddy in anticipation. Sounding more like a man whose old Corvette has just been repainted cherry red, he blurts, "I'm obviously excited! I'm about to see my bride, minus 10 years! Hee hee hee!"

Sounds like what Mommy really needs to do "for me" is go straight to the nearest divorce lawyer's office -- OK, maybe she could swing by Sephora on the way there. But this is TV! We've got no time for errands! Spotlight, please!

Guthrie emerges looking perky and cute and nothing at all like her former self. In fact, with her new button nose and face-lifty taut skin, she looks more like a talk-show host than a stay-at-home mother of three. I'm almost surprised when her young kids don't run away crying and screaming, "You're not my Mommy!" They flash a before and after picture and I already miss Guthrie's old face, which, with all its flaws, had its own distinct character.

But who needs character, when it means looking like an old woman? No one wants to look like an old woman! Besides, to hear the experts at "Extreme Makeover" tell it, going under the knife is the shortest, most direct path to empowerment. Do you really believe it was the Cabala that gave Madonna smooth skin and a thinner nose?

The best thing about "Extreme Makeover," then, is the important lessons it teaches you. And at night, when you go to bed, may you dream of Georgia O'Keeffe with the face of a talk-show host.