Lauren Weisberger talks about life as an underling at Vogue, how her editor shields her from negative press, and her new roman a clef, "The Devil Wears Prada." 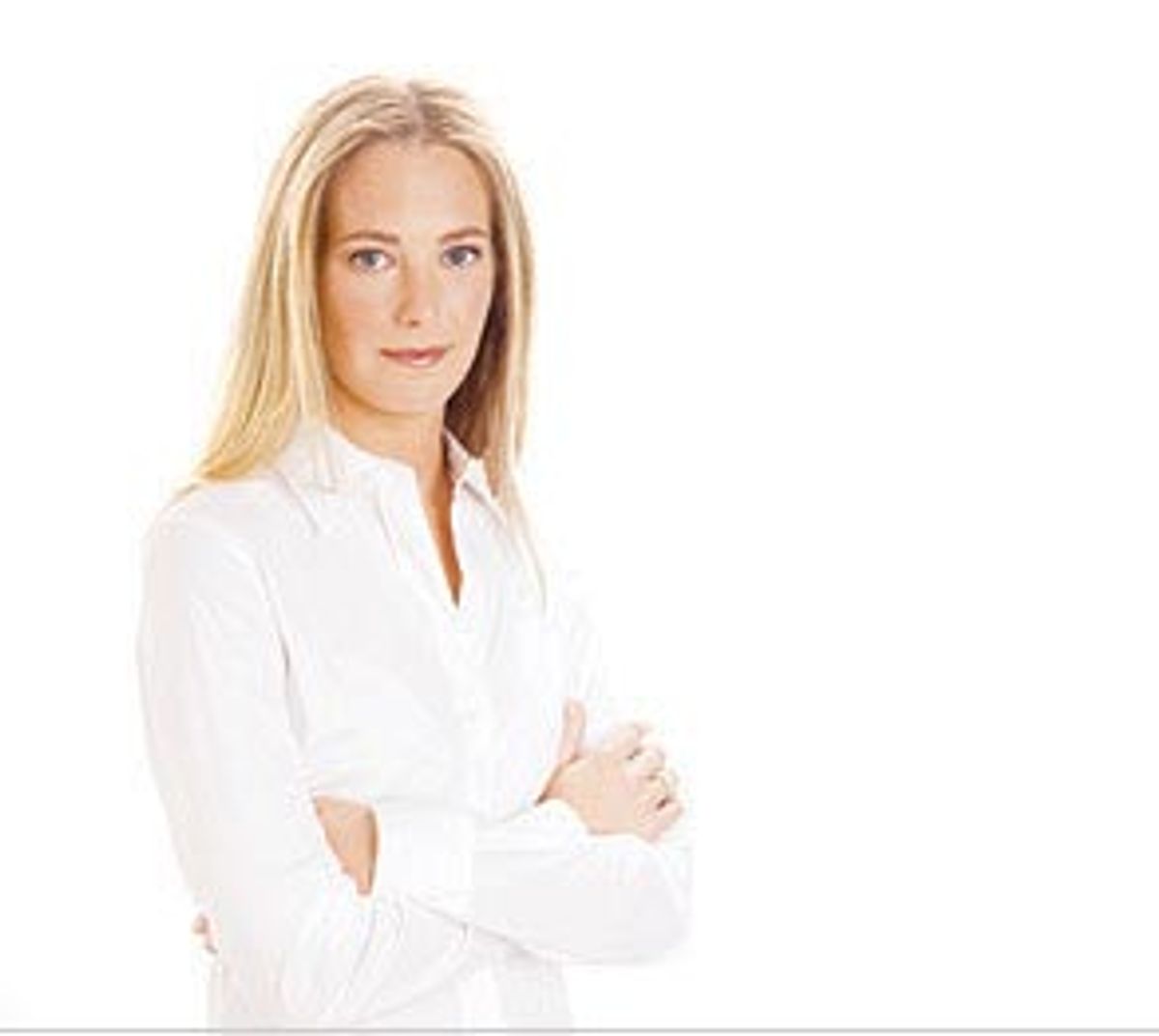 Lauren Weisberger wedges her lanky frame into a corner seat in the back of an Upper East Side cafe. "Is this OK?" she asks, tucking a strand of her long blond hair behind her ear and poising herself to move if necessary. "Sure," I shrug, "it's fine." She seems a little nervous, and understandably so.

Weisberger's "The Devil Wears Prada" -- a breezily written, thinly veiled roman à clef about the year she spent at Vogue as power editor Anna Wintour's assistant -- chronicles the experiences of Andrea, a recent college grad who works at Runway magazine for an abusive editor. The book was hotly anticipated by media insiders and publishers as both a tell-all about the inner workings of the fashion magazine world and the summer '03 version of last year's bestselling "The Nanny Diaries." The buzz surrounding the book has been amplified by talk of a six-figure advance and a comparable sum for the movie rights, which were sold before the manuscript was even finished.

Several of the book's reviews have been harsh, and many of them deeply personal. Of particular note was a piece in the April 13 New York Times Book Review by the former editor in chief of Harper's Bazaar, Kate Betts -- once an employee of Wintour herself. Betts denounced the book as "bite-the-boss fiction" and treated the lead characters, Andrea and Miranda, as direct proxies for their respective counterparts, Weisberger and Wintour. "Andrea has an unbecoming superiority complex and is just as much a snob as the snobs she is thrown in with," Betts wrote. "[She] makes no bones about the fashion business being beneath her, or that her true calling is not to be fetching tall lattes for Anna/Miranda but to be supplying high-minded prose for The New Yorker."

Weisberger, in a preppy rugby shirt, jeans and no makeup, hardly looks like the bitter fashionista one would imagine grinding a metaphorical Manolo into the neck of one of the most feared editors in the fashion industry, as Andrea eventually does in a climactic blowup with Miranda, and as some say Weisberger did with Wintour by writing the book. Betts' sentiments have been echoed by others who have charged Weisberger with ingratitude, snobbery and, perhaps most damning of all, bad writing. Salon talked to Weisberger about the chilly reception the book has received, the charges leveled against her by Betts and others, and her experiences as a writer.

Why did you choose to write a book that so closely mirrored your own experiences?

I mean, it doesn't so closely resemble my own experiences, only in that, yes, one of my jobs out of college was working at a magazine. To a certain extent, you do write what you know. Everyone does. I'm only 26 so I don't have that much experience doing anything anywhere so I'm not equipped to write about 99 percent of the topics out there. But I thought, you know, it's a fun setting. At least, I think it's a fun setting. The fashion world naturally lends itself to being glamorous and exciting with all the models and the clothes and everything.

How do you feel about the reception the book has gotten so far?

It's completely overwhelming. I don't think I ever expected the book to get this kind of attention -- negative or positive. My publisher calls every day and gives me sales figures -- which mean nothing to me. People tell me that it's doing so well and that's amazing. The anticipation was sort of stressful, but now that it's out there, and I know people are buying it ... For the most part, I've gotten nothing but a ton of support and a ton of enthusiasm. There is, for sure, negative stuff out there and that's not easy to read. I don't think it's easy for anyone. But I really am focusing on the good stuff. Just the idea that people are reading it is awesome to me.

What did you think of Kate Betts' review in the New York Times?

It's not easy to get bad reviews, so what more can I say? I can't speak to anyone's agenda. I don't know her. I can't presume to know ...

Why do you think the Times had her do the first review?

If you find the answer to that question, I would love to know. I'm the first in line for that answer. [Laughing] I have no idea. I'm kind of curious.

Have you tried to find out?

No, I can't -- it's just been so busy and so crazy and there are a lot of good things to focus on. I would be lying if I said I didn't wonder, but I certainly haven't done anything to figure out why they asked her to review it.

I know a lot of authors who have this "I'm not reading any reviews" rule. Do you not read certain reviews? Or do you have someone filter them?

My editor filters them. She's the first one who introduced me to the concept of "you don't have to read everything that's written about you." She sends me good things, fun things. And, you know, I have read some of the negative ones, but it's usually when I stumble on them myself. People are like, "Oh, come on. You must be reading it secretly," but I'm really not. It's easier to just pretend it doesn't exist.

There was a lot of publicity before your book came out, and people were throwing around these very high advance figures -- probably because the magazine world is very interested in the publishing world and vice versa.

Here in New York we're media obsessed. Writers write about writers who write about writers and reporters and freelancers, and it's just a festival of information. We're all analyzing and examining and predicting and I can't imagine that it's like that everywhere else. I'm really, really looking forward to my book tour for that reason. I want to leave New York for a little while, hear from people who are actually reading the book -- not book critics, not reviewers, not New York media, but, you know, the people I intended it for. I think it's getting different reception elsewhere.

Why do you think your book has a broader appeal in other parts of the country?

Because it's about that universal first job experience. Everyone has worked for a tough boss before. No matter what industry you're in, everyone can relate to that feeling of never being prepared, and of being asked to do stuff that you find humiliating.

Do you think you would have gotten published if you hadn't spent a year as Anna Wintour's assistant?

How do you think it affects your writing career if, let's say, later on you want to write a serious work of literature? Are you afraid of getting pigeonholed because you did this first?

I have no regrets about writing this book, or this type of book. As long as I'm able to actually maintain a career where I can write full-time, I'll be thrilled.

When you left college, why did you choose to work at Vogue?

I got an offer at Vogue. And I desperately wanted to work in magazines. My interest wasn't in fashion, but when you get an offer right out of college for a magazine that big -- I decided that it was probably better to start at a big name magazine, even if I wasn't necessarily fascinated with the subject.

Did you end up doing any editorial work?

No, I didn't do any editorial work, but I knew that going in.

When I was reading the book, I noticed several references to the main character's ambitions to write for the New Yorker. Is that what you'd eventually like to do?

No. I mean, I love the New Yorker. And I think that anyone who likes writing views the New Yorker as the, you know, pinnacle of the publishing world. If you get 50 words published in the New Yorker, it's more important than 50 articles in other places. So, would I love to one day write for them? I guess. But that's not my sole ambition.

Some critics have pointed out that it is sometimes difficult to distinguish between the main character, Andrea, and her boss, Miranda, because they exhibit some of the same traits. Andrea was a little snobby. Was that your intention?

I wanted her to be sarcastic and irreverent in a way that I think a lot of recent college graduates moving to the city are. She's someone who rolls her eyes at everything. I did set out to make her that way and I did intend for her to change over the course of the book, to become more like Miranda. But she recognizes that in herself. And at the end when Miranda says, "You remind me of me when I was your age," all of a sudden, she's like, "Oh my god! I remind this dreadful woman -- this woman I loathe -- of me!" If people are recognizing that, well, that was my intention.

I don't think of [Andrea] as snobby; I just think of [her] as a character who laughs at herself and everything around her whenever the opportunity arises. I won't go so far as to say I'm like that, but a lot of my friends and a lot of the people I meet just kind of make fun of everything around them and it's not meant to be mean-spirited.

But there's that scene in the book where Andrea makes fun of her brother-in-law for being from Houston. Isn't that snobby?

Say you're sitting in a mall and you're people-watching and when everyone walks by you make comments. It's not meant to be hostile; it's just a way to pass the time.

Are you concerned that people buying the book will misinterpret it?

Hopefully, the vast majority of people who pick it up will read it and enjoy it for what it is. It's a beach read; this is not great literature. We all know that.

Elizabeth Spiers is the editor of Gawker.com. She lives in New York.