In this con game, Dustin Hoffman chews gum (and the scenery) and Ed Burns does his regular-guy shtick. Again. And we're the marks. 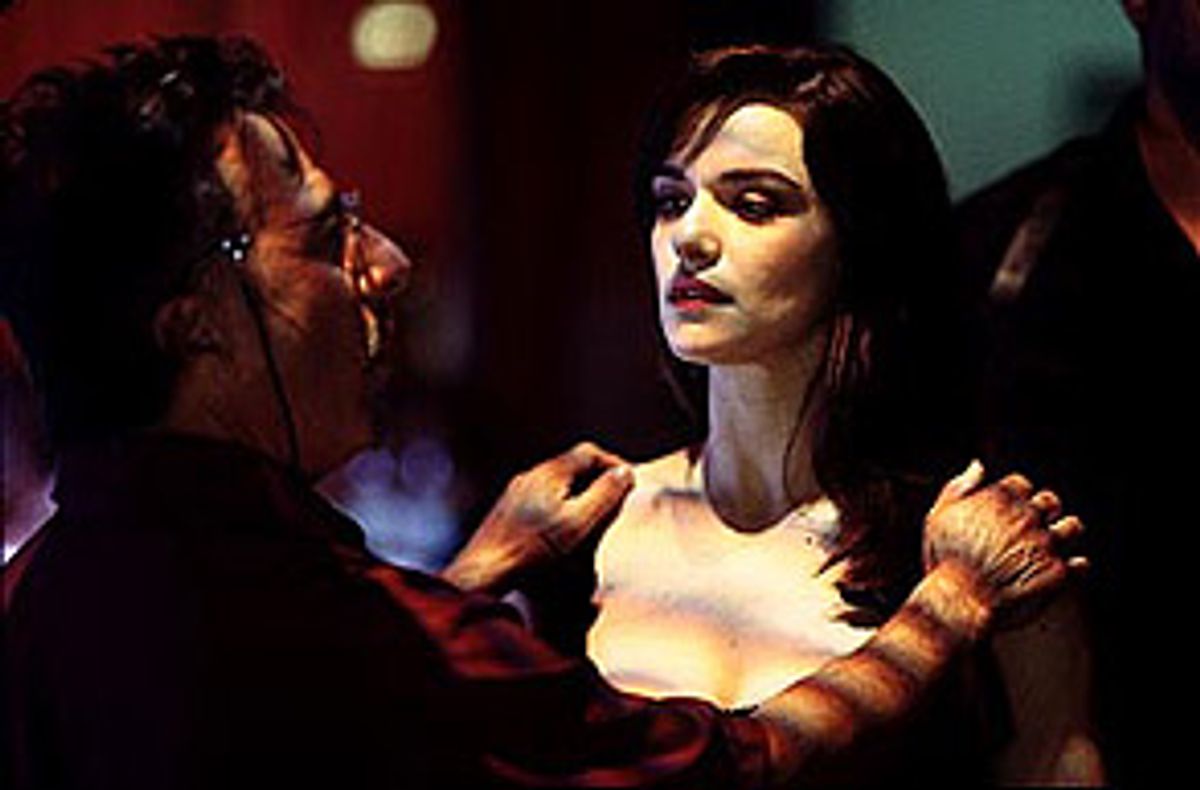 "Confidence" isn't much but at least it affords the chance to hear Rachel Weisz call Edward Burns "a raving pussy." There's a cruel pleasure in that, for those of us who have never been able to buy Burns as a leading man.

What is it about Burns that, for all his one-of-the-guys shtick, makes him seem so wimpy? Part of is that peculiar voice of his -- strangled, wheezing, and whiny all at the same time. Every line comes out sounding like a guy trying to get his mom to stop vacuuming the living room while the game is on ("Hey, Ma! I'm watching this here!"). And part of it is his Teflon resistance to any kind of coolness or elegance. The expensive suits he wears throughout "Confidence" have the same effect as the gold foil on a bottle of Michelob.

In "Confidence" Burns plays a slick con artist whose latest scam inadvertently ends up ripping off a hyper, neurotic L.A. gangster (Dustin Hoffman). His character may sucker a series of marks, but Burns can't con us into believing a single thing he does. He simply does not have the panache to make him believable as a top-notch con man. If Burns had some slyness in him, he might have shown the character using that Irish jock quality to work his frauds. "Sometimes," Hoffman warns Burns, "style can get you killed." By that measure, Edward Burns should enjoy a long life.

"Confidence," which was written by Doug Jung and directed by James Foley, is a long plod to the finish line. It's a movie about a long con that, like its leading man, has no wit or style to speak of. The movie is all setup, and to pull something like that off (as Joe Gores does in his comic crime novel "32 Cadillacs") you need to make the mechanics surprising and pungently funny. Jung makes his screenwriting debut here and displays no original voice. It's all second-hand tough-guy-isms and profane irony of the "Whaddafuckyatalkinabout?" school. Jung appears to have tried to make David Mamet's minimalist game-playing more commercial by injecting it with the "street" energy of pulp. (There is one stray wild line. Hoffman, auditioning a couple of girls for a sex show in his club: "I appreciate the artistic choice you made to eat each other -- but you have to do it tastefully.")

Foley directs with the same joyless second-hand spirit. He doesn't recognize an opportunity for comic invention even when Jung drops it in his lap. In one scene, a member of Burns' team, a nearly mute strongarm Hoffman has forced on him to keep watch on the scheme that will recoup the money Burns stole from him, launches into a complicated speech to Burns' mark, in order to save the scam from going south. Instead of creating some tension with an inarticulate thug trying to be silver-tongued, the scene is flat. It's just one more bit of information, one more step in the setup to be gotten through like a chore.

Someone should also tell Foley that if you choose to shoot a movie almost entirely in close-up, you should at least work with someone who knows what flesh tones look like. The cinematographer, Juan Ruiz-Anchia, manages to make everyone look pasty and wan, which is some sort of reverse achievement when it comes to the luscious Rachel Weisz. Ruiz-Anchia bathes everyone and everything in a bilious shade of green, even in direct sunlight.

Weisz, speaking in a nasal American accent, at least has a little ticky, disreputable energy. And there are flashes of what the supporting cast -- Paul Giamatti (fine and believable, but then when is he less than that?), Luis Guzmán, Donal Logue, Robert Forster -- might have done with a script that allowed them their chops. Hoffman's chops are of a different kind. He's made the choice of demonstrating his character's nervousness by constant fierce gum chewing. That's a good thing. Had he been deprived of his Chiclets there would be teeth marks in every bit of the scenery and probably in the other actors as well.

There's a difference between being a consummate actor and being nothing but an actor. Here, Hoffman has chosen the former. You can't call overacting of this sort phoned-in. Hoffman is too committed to the badness of his performance. He's constantly touching the other actors, getting in their face, impinging on their personal space as if to force them into acting as much as he is. I can't imagine what it's like to try and work with someone this aggressively all over you while you're trying to find some free space to do your lines. He's less an actor here than a damn Visa card -- he's everywhere they want to be.