"It Runs in the Family"

Three generations of the Douglas clan -- Kirk, Michael and grandson Cameron -- star in a bumpy but brave family comedy about old age and mortality. 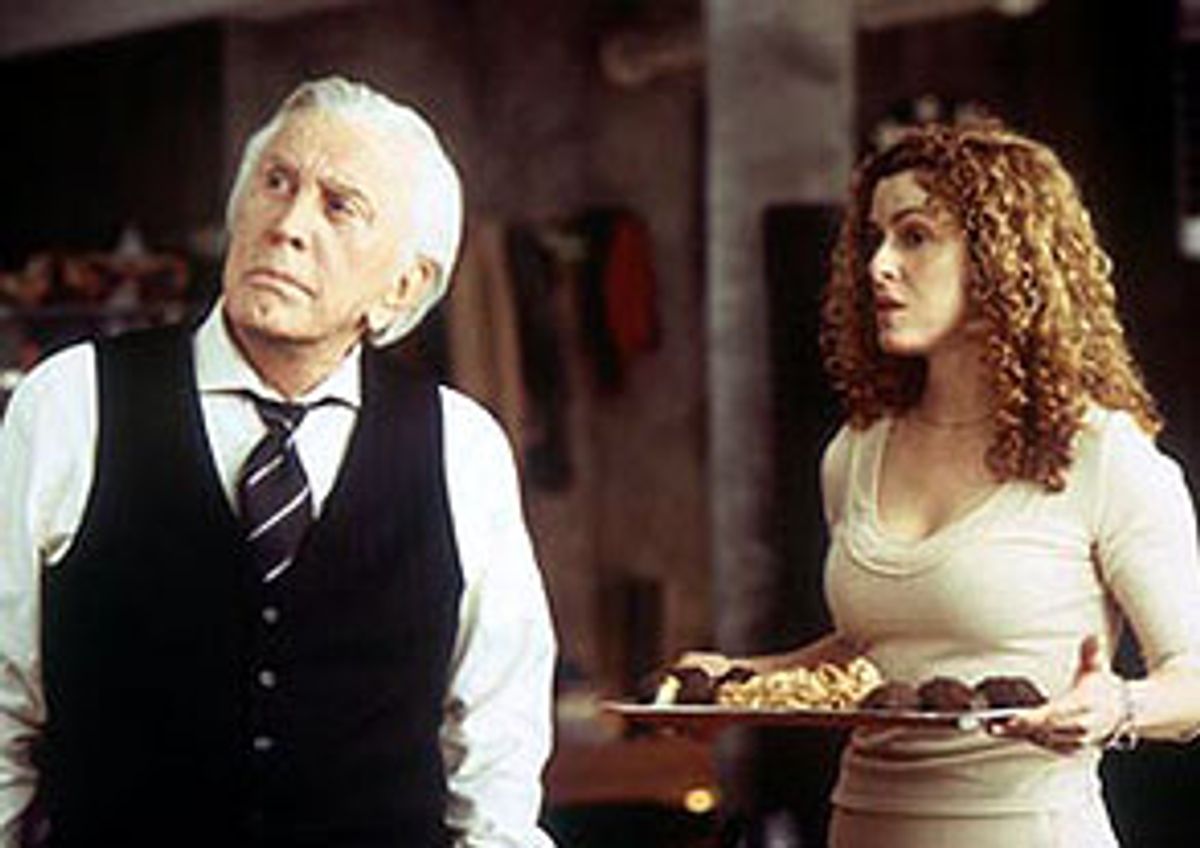 The novelty factor of Fred Schepisi's "It Runs in the Family" is high: The picture stars three generations of Douglases -- Kirk, Michael and Michael's son Cameron -- as well as Kirk's former wife (and Michael's mother) Diana Douglas. A family comedy that's also something of a drama (or maybe it's the other way around), the picture never quite finds its footing. Even though the script, by Jesse Wigutow, wasn't written for these specific actors, it feels as if it was woven around them. You're usually aware that you're watching three generations of Douglases, instead of characters that you come to believe in as real people.

But there's something to be said for the way "It Runs in the Family" treats its elderly characters, and for the way it deals with old age in general. Kirk Douglas, at 86, isn't just playing old; he is old. That fact hasn't escaped him for a minute, and he puts it in front of the camera baldly, without vanity. I'm not saying Douglas is playing himself. But in playing this character, he's clearly drawing on the person he is now -- for one thing he's a person who, just like his character, suffered a stroke a few years back and learned how to speak again.

When we first see Kirk Douglas' Mitchell Gromberg, a long-retired bigwig lawyer, he's hunched over on a doctor's examining table. This is a formerly robust guy who's now a cubist sculpture of bony, concave surfaces, patiently tolerating the poking, prodding and tapping that comes with a doctor's examination. The resolutely cheerful M.D. gives Mitchell the bad news: He's got a few good years left. Mitchell doesn't want to hear it. "What about this?" he insists, pointing to a patchy area on his chest. "Dry skin -- not cancer," says the doctor, and Mitchell shoots him a sour look.

The senior Douglas plays the scene for laughs, but they're wincing ones: Most of us, particularly those of us under the age of 70, don't feel comfortable with this kind of "old people" humor -- humor predicated on the idea that after a while, as much as you may love life, it's probably natural to feel a little exhausted by the decades-long adventure you've been through. But Douglas relishes the dark, glittering humor of the joke. Later, we see him cackling as he reads an obituary in the paper. "My ex-partner -- died," he says, barely able to choke out the words for his laughter. "At last."

The elderly characters in "It Runs in the Family" are the most vital ones, maybe because the movie doesn't condescend to them. It doesn't make them the butt of cutesy "Grumpy Old Men"-type jokes. Nor does it look like an AARP brochure loaded with pictures of cheerful, vigorous seniors leading active and productive lives (the reality is that some are simply not able).

That may be because the elderly characters in "It Runs in the Family" aren't accessories or also-rans. The turmoil that brews and overflows in the story affects them just as much as it does the younger characters. The movie is a snapshot of a family that's suddenly gone out of whack. Michael Douglas is Alex Gromberg, a lawyer who has slipped, uneasily, into the law firm that his father helped found, even though his heart lies in public service. He's also undergoing at least a glimmer of a midlife crisis, which leads to miscommunication with, and disconnection from, his bright, no-nonsense psychologist wife, Rebecca (Bernadette Peters, who gets some of the movie's funniest lines and hits them, obliquely, right out of the ballpark).

Their older son, Asher (Cameron Douglas), is a lackadaisical pothead stumbling through college. Their younger son, Eli (Rory Culkin, whose round, earnest, watery eyes suggest that this bright, likable kid carries more weight and worry than anybody else in the family), is shy and well-mannered and probably too together. (He solemnly hands his parents a spreadsheet with his expenses -- for items like pencils, erasers, a yoga book -- laid out in authoritative little grids.)

Mitchell, the patriarch, is the kind of cantankerous father who always made his son feel he couldn't quite measure up; his wife, Evelyn (played by Diana Douglas, from whom Kirk has been amicably divorced for 50 years), has always been the one who dispenses all the love. They're supremely comfortable together, as long-married elderly couples sometimes (but not always) are. The two actors are particularly touching in a scene in which Evelyn interrupts the baseball game Mitchell's watching on the tube to coax him into an impromptu slow dance around the living room to Bobby Darin's recording of "You'll Never Know."

That's an idyllic respite before the calamities begin to pile on, one after the other. People die in "It Runs in the Family," and the fact that they've lived long, full and (we assume) happy lives doesn't negate the reality that the people they leave behind simply miss them. With a minimum of sentimentality, "It Runs in the Family" grooves on a stock theme: You'd better appreciate your loved ones while they're still around, because they won't be around forever. You can see Michael and Kirk Douglas, the real father and son, playing that out from within the confines of their characters, and it's sometimes very affecting. (Cameron, who has never acted before, holds up well enough, but his character only hovers on the periphery of the dynamic between the older ones.)

The characters Kirk and Michael are playing are supposed to be uncommunicative and often at odds. But it's easy enough to pierce the cellophane membrane of that construct to see something of the way the older and younger Douglas relate to each other: They're relaxed, affable, a little confrontational. At one point Alex and Rebecca are discussing Mitchell and how he's changed in the year since his stroke; his mind is clear, even though he speaks with some difficulty. Alex mutters, "He's still a ballbuster -- only this year it's more difficult for him to enunciate his insults."

There's an earthy kind of love in that comment, and the younger Douglas makes you feel it, even though overall "It Runs in the Family" is both too conventional and too bumpy. It doesn't exactly feel like a Fred Schepisi movie -- it certainly has none of the subtly textured multilayers of the director's other, better pictures, like "Last Orders" or "Six Degrees of Separation" or "The Russia House." The movie's rhythms feel shaky from the start, partly because the characters' lives themselves are out of whack: Their individual orbits keep colliding, and their attempts to communicate often misfire. But "It Runs in the Family" never quite slips into its proper track; it always feels a little off its game, as if it's trying too hard in some places and not hard enough in others.

Even so, it does hold a few moments where things come together with unusual clarity or brightness. In the movie's best and weirdest scene, we see Kirk and Michael Douglas standing on the edge of a lake, staring after the flaming boat they've just sent adrift. That boat contains the remains of Mitchell's brother, an old Navy veteran who has long been confined to a wheelchair and who has spent his last years in a nursing home, barely cognizant of his surroundings or the people around him. Mitchell wants to give his brother a Viking funeral; he stands solemnly at the edge of that lake, saluting the memory of a brother whose life had simply trickled, not roared, out of him.

Later, Mitchell and Alex drive speedily away from the scene -- Alex is acutely aware of the illegality of what they've just done -- as a group of fire trucks race in the other direction, obviously in response to anxious locals' phone calls about the fiery boat. Suddenly, Alex is the responsible grown-up, the parent; Mitchell is the troublemaker, and even through his mourning, you can see pure delight on his face. If you can still stir up trouble, you're still alive. Sometimes it's just what you need to keep going.