A special Match Made in (the 9th circle of) Hell

On orders from my shrink, I posted a personal ad. Now I really need therapy. 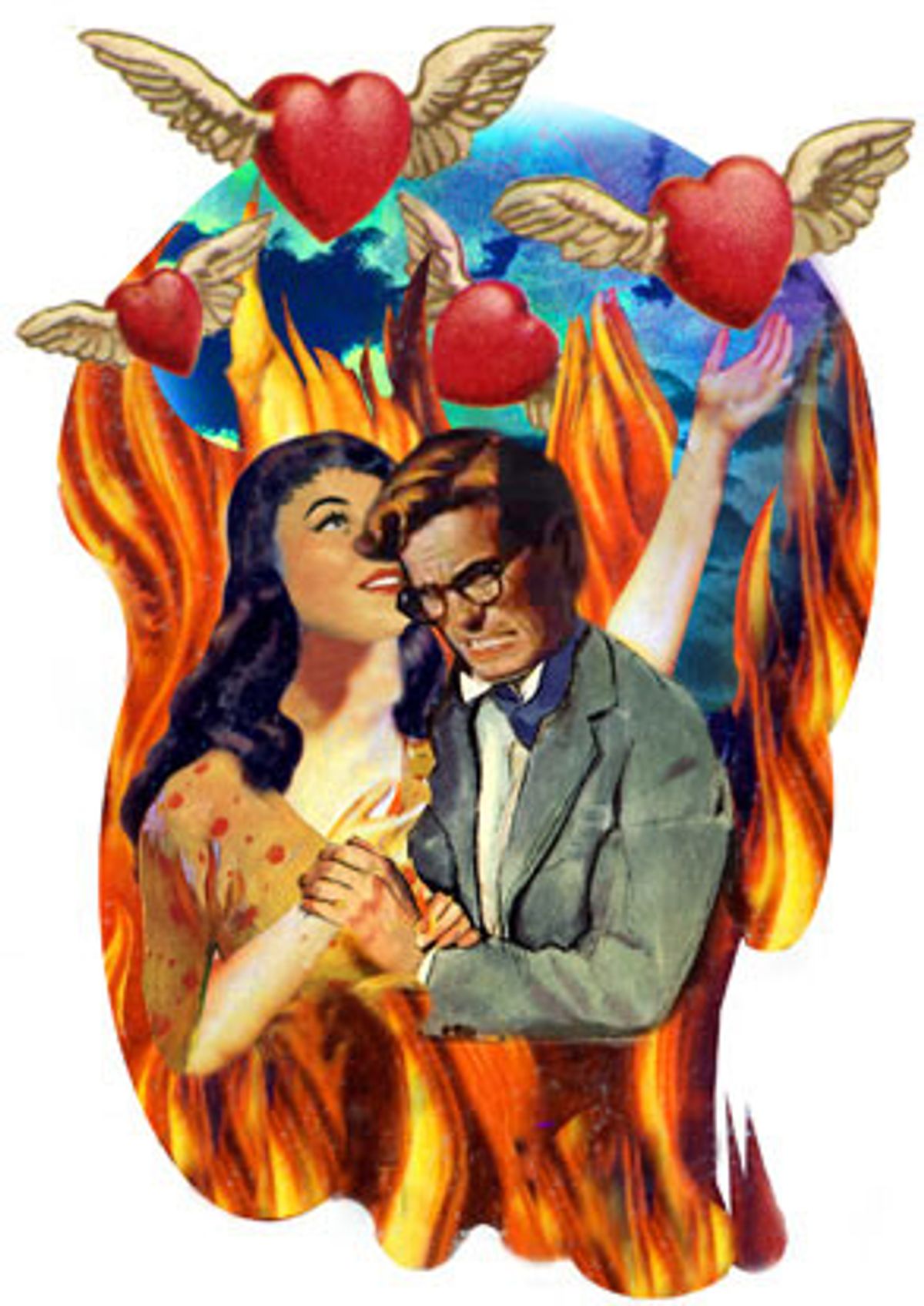 Some people have such bad dating experiences that they go home and eat ice cream until they fall asleep. My dates started becoming so frighteningly creepy that I began to disinfect myself, literally, afterward. It became routine for me to come home from dates by 10 p.m. and spray myself with Lysol. Nothing lethal or directly in the face -- just a general spritz into the air, then a walk through the cloud with my eyes closed, breathing in the vapors of "Crisp Linen," my favorite Lysol scent.

Yes, the dates were that bad. One involved a guy telling me all about the "action" he'd gotten the week before. Another man thought it would be fun for us to get to know each other at a gay pickup bar. Then there was the time my date and I went to a friend's apartment for a party and halfway through the night I found him on the roof giving another guy a blow job. When they noticed I was standing there, my date looked up and said, "Oh my God, I'm so sorry" -- which killed the blowee's erection. In a Shannen Doherty-on-"90210" moment, I stammered, "I should throw you off this roof!" But instead I walked away.

Clearly, I was doing something wrong -- or at least attracting the wrong kind of people. So I decided it was time to talk about my "relationship issues" with an expert. I made an appointment to see a therapist. I found Alan (not his real name) through an ad in a gay newspaper. He specialized in gay male sexuality. Perfect.

During our first session, Alan asked me why I was seeking therapy, and I told him straight out: I was anxious about intimacy and sex and it was getting in the way of meeting people. He looked at me for a moment, flashed an unbelievably wide, toothy grin and told me that maybe all I needed to do was "go out and get fucked and have a good time!"

I was paying him by the hour, so I had to take his advice. But in order to fuck people, I had to meet them. So I signed on with an online dating service. When writing my ad, I wanted to appear sexy and put-together, yet somewhat aloof too. This is what I came up with:

"Smart, fun urban professional, 26, Italian-American, in-shape/athletic, GWM. Love to go out on the town but love a quiet evening at home even more. Not into the gay 'scene' or attitude. Highly educated, literate, but not snobby or ultra-intellectual. Love a good laugh."

OK, it wasn't Chekhov, but it was a start. And now that I'd done the hard part, I could leave the matchmaking to a complicated, anonymous system of computerized tabulations, rather than my well-intentioned pals who have tried, bless them, many times to set me up with their Other Gay Friend (OGF). My past dates with OGFs have included a hookup with a staunch Republican who told me I subscribe to "pansy politics," a guy who appeared physically incapable of talking about anything but his Lhasa apso, and a gentleman who was so addicted to cocaine that he named it Mary.

Before finding out who my "matches" were, though, I had to fill out an online questionnaire, answering yes, no or maybe to every possible like/dislike question, and then I had to indicate what I was seeking in a partner -- age range, smoker or not, height, likes cats, etc. I fed the computer all of the information it requested, made myself a strong cup of coffee and clicked the Go button. Visions of the ideal man danced in my head. I imagined a range of sterling, smiling faces with perfectly placed cheekbones appearing on the screen before me.

Indeed, several hundred matches (and photos) miraculously popped up. But my eyes locked on match No. 1. There was something about his large, flashing teeth, and his deep, obviously fake tan. I quickly pressed the "refresh" button, hoping he might go away. When he didn't, I got out my fluffy yellow dust rag and wiped my screen hoping the image in front of me would somehow mutate. But it didn't. It was undeniable: The face in front of me was Alan's, my therapist.

What would Freud say? Was this not the ultimate transference?

Besides being totally creeped out, having Alan as my best match made me inexplicably enraged. I was furious at the dating service; myself; Alan; the American Psychiatric Association; and my ex, Steve, who broke up with me three years ago.

In his photo, Alan wore a tank top and flashed a subversive-looking, snaggletoothed grin. His eyes appeared slightly crossed, which made him look exactly like the kind of predatory male I was paying him thousands of dollars to help me figure out how to avoid. And his profile had some major errors. He said he had a Ph.D., when in reality he's only got an MSW. He also claimed to be 38. He's about as 38 as someone at their 44th birthday party.

As I read, all of the weird and unprofessional things that Alan had ever done came flooding back. There was the time I told him that sometimes I liked to be a bit of an exhibitionist, and he responded by asking if I had a large member. There was the fact that Alan is convinced that I've had a long-term relationship with someone named "Michael." He often says things like, "This is exactly what you went through when you were dating Michael." The problem is, I've never had a relationship -- or even a one-night stand -- with anyone named Michael. But every time I tell Alan that Michael doesn't exist he looks at me like I'm lying, like this is something we need to "talk through." And finally, there's his annoying habit of popping Chinese food into his microwave during sessions and eating it, loudly, while I talk.

Fuming, yet unable to stop myself, I continued to scroll through Alan's profile, which wasn't really a profile, but a mire of arrogantly rendered rules and wince-inducing statements. "Been in LTRs before (references available) and grown alot [sic] over the past years. Definitely masculine but with a nurturing and romantic side." The last part really pissed me off, the fact that he, a licensed psychotherapist specializing in gay men's issues, felt that masculinity was mutually exclusive from sensitivity.

"Genrally [sic] find myself on top -- usually dominant in the sack (though also sensual and playful -- NOT into pain, NOT into tons of "rough riding") -- but need a bottom guy who is sexually -- NOT emotionally -- submissive. (Having said all that, I DEFINTELY [sic] could be versatile w the right guy -- connection and chemistry are far more important to me than position). I'm generally NOT into quik hook-ups these days."

What's up with "quik"? Not to mention all the other glaring spelling errors? And, regarding "DEFINTELY": If you capitalize something, better spell it right. And speaking of capitalizing, his random uppercase had me thinking, Do you NOT realize that ALL CAPS MEANS SHOUTING?

I got up, went into the freezer, opened a container of chocolate ice cream, and began scarfing it down. Then I went straight back to my desk and resumed reading. The part where Alan describes what he's looking for in a partner started out this way:

"A really special SWEET guy -- someone smart, handsome and in good shape, both masculine and sensitive, happy, playful -- both in and out of bed -- adventurous, caring and giving (I am)."

"Zip it up, horndog," I heard myself say, mouth full of Haagen-Dazs. I picked up my little blue stapler and started stapling nothing, watching the silver slivers drop, thinking, I need a boyfriend. Then, I read further:

"I'm muscular and like to work out -- you DON'T have to be (lean or a few extra lbs are cool, overweight isn't) -- but mostly you should be ok with what you've got. A great smile definitely helps -- like to see that grin when I'm looking down."

At this point I remembered a session where I had explored my interest in being sexually dominated. "So, you want to give blow jobs?" Alan had asked. "Yeah, I guess that might be what it means," I stammered, hoping this uncomfortable exchange would soon end. But Alan continued: "On your knees?"

That's when I picked up my phone. I left a message on Alan's voice mail. "I have to cancel my next appointment," I said. "Things have been really ... busy. And I'm going away for a week after that, so ... why don't I call you, when I'm back ... and settled ... got lots of work these days, so again, I have to cancel ... " He didn't call me back, which is fine, because I'm seeking another therapist. For the long-term. Male or female OK. Good listening skills required, sensitivity essential. Married and monogamous a plus.

Stephen F. Milioti has written for the New York Observer, Surface and Interior Design. He is currently working on a memoir about his mother.